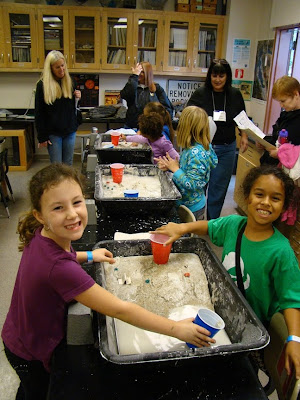 I get reminded every so often that the problems we have with science education in this country are not because kids aren't interested in science. It's maybe true that there is some sort of hormonal imbalance between about 6th grade and the end of high school that interferes with the natural curiousity that kids have about science, but even kids suffering from such afflicitions can sometimes be reached by intense therapy programs like NKLI ("No Kid Left Inside").

That's what made today an especially gratifying experience. Unknowingly coinciding with the birthday of planet Earth, our school held a Wild Planet Day Celebration as a fundraiser for our local natural history museum. This was the first time we had ever done such a thing, and no one knew what to expect: would families in our economically depressed region be willing to pay an admission fee to see exhibits of wild animals, programs in a portable inflated planetarium, hands on physics experiments and so on? Our anxiety was not helped by the gloomy skies that threatened rain. We set up and waited to see what would happen. 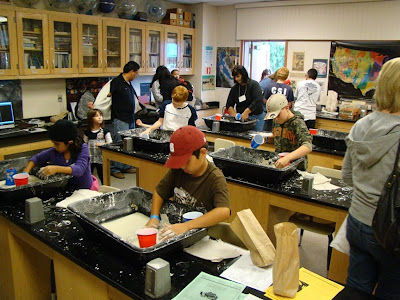 We were happily surprised by the response! It seems that there is a hunger for good science in our community, and families showed up in droves to enjoy a day of dropping eggs, petting farm animals, blowing giant bubbles, designing egg preservation contraptions (dropping them off a stairwell), building bird boxes, and meeting live bats. I heard that more than 500 people showed up. 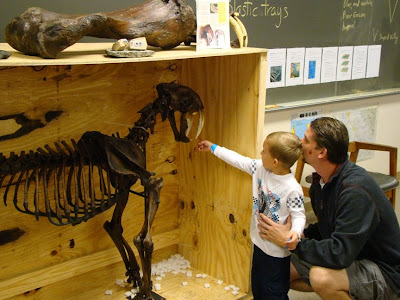 In our little geology corner, we debuted our new museum specimen to the community, the sabertooth cat skeleton that arrived last April. We offered a very messy stream table excercise that was a hit with the kids, and laid out hundreds and hundreds of surplus rock, fossil and mineral specimens that we encouraged the kids (and their parents, as it turned out) to take home. The kids concentrated on their sample choices like they were in a candy shop, and they asked one question after another about their little discoveries 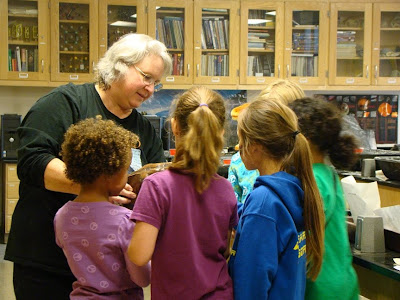 In a time when we have so much ignorance about science in the society at large, and among politicians in particular (especially the ones who determine school funding priorities), it was refreshing, even inspiring to see such enthusiasm and excitement about science, even on a gloomy, rainy day. It was a great day!
Posted by Garry Hayes at 7:12 PM