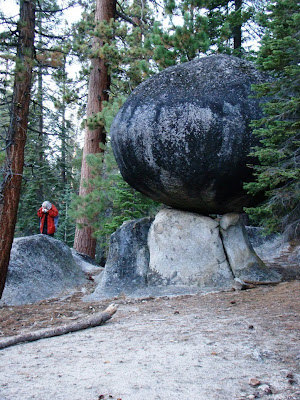 Sunday's mystery photo produced a pretty good response of hypotheses, both of the scientific sort, but also of the fanciful sort (and sometimes the boundary gets blurred!). The rock in question is known as Globe Rock, and it can be seen along the Sierra Vista Scenic Byway, an 85-mile long loop road in the high forest country between Yosemite and Kings Canyon National Parks. The area is drained by the San Joaquin River. The elevation is about 7,000 feet. 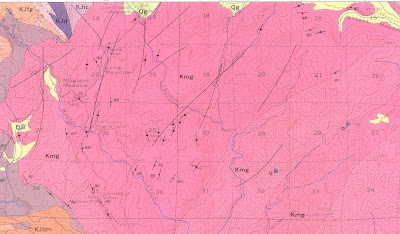 As noted on the geologic map by N. King Huber of the Shuteye Peak quadrangle (USGS Geological Quadrangle GQ-728; get all of the central Sierra Nevada geologic maps here), the rock underlying the Globe is the Mt. Givens granodiorite, a medium to coarse-grained hornblende-biotite granodiorite and granite that is locally porphyritic with tabular K-spar phenocrysts with a U-Pb age of about 90 million years (my casual non-geologists readers are forgiven for not following this, but my students had better understand it; there's a midterm Tuesday on this stuff!). The rock is labeled on the geologic map, near the top and to the left. 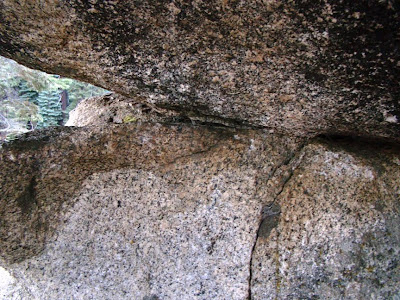 A lot of the answers to my challenge on Sunday noted the possibility that this was a glacial erratic sitting on a pedestal. This is the most likely answer based on my cursory examination, although the possibility must be considered that it may also be an unusually weathered exfoliation slab (in other words, the rock formed in place, not transported from elsewhere). There are glacial deposits shown on Huber's map only a mile or so away, and the larger pre-Tahoe glaciers may have covered much of the region. In either case, the pillar would have developed because the large boulder protected the underlying rock from weathering, while the surrounding rock was eroded away. In this setting, the amount of erosion suggests that the boulder has been there for a very long time. The odd spherical shape of the boulder itself would also be an indicator of age; corners and edges tend to be weathered away first.
Glacial erratics are very often composed of a different kind of rock, and the black coloring on the boulder certainly causes the rock to appear to have a different composition, but a close look at the base of the boulder (above) shows the rocks to be actually quite similar, and they are both certainly granitic. The dark color is provided by dark oxides and lichens growing on the surface. Even if the rocks are the same, it quite probably could still be an erratic, as the Mt. Givens granodiorite is widely exposed in the region. 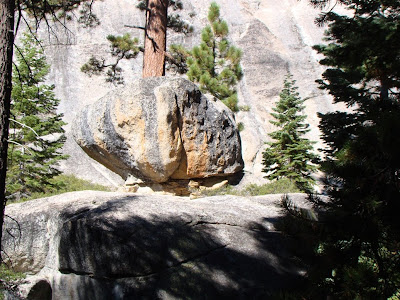 Rocks on pedestals are quite interesting for a number of reasons, not the least of which is their contribution to the scenery. If they can be tied to a particular glacial episode, they can be a clue to the rate of erosion in a region. If they are truly precarious, they provide some data about the likelihood of severe shaking during earthquakes. If they haven't toppled in the thousands of years they have existed in a particular spot, it would suggest a limited degree of ground movement (although I have to wonder...this rock is close to major faults in the eastern Sierra Nevada).

The other rock I photographed this weekend illustrates what probably amounts to a younger pedestal boulder, on the flanks of Sentinel Dome in Yosemite National Park. It is less rounded, and has not developed as high a pedestal. This could be a function of age, although differences in composition and local soil conditions could also be a factor. This site is described as being outside the limits of the Sierra glaciations, so it is either a rockfall 'erratic', or it is part of a slab that formed in place. 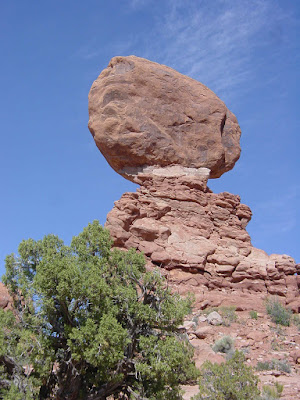 Balanced rocks are found in many different circumstances and many different places. One of the commenters provided a link to a balanced boulder in Kansas, and I've included a shot of the famous Balanced Rock at Arches National Park in Utah.

What other balanced rocks do you know about? Got any pictures?
Posted by Garry Hayes at 5:22 PM

How about a different take on Balanced Rock in Arches - during an eclipse?

Well, that is just plain cool! Thanks!

I've seen a lot of balancing rocks in Bryce Canyon's limestone and my winter home has granitic plutons with many balancing rocks. I was thinking this might be an erratic. Certainly looks a lot different than the "toadstools" seen in Escalante.

Hope those students of yours are paying attention to the quiz answers. ;)

but my students had???
past??
better understand? it;

I have to say the balancing rocks are just way cool. I have never seen anything like that. I will have to go visit that place too. I have not been able to go to very many places but since taking Garry's class gives me a new perspective on the land that I live on and around. I have really enjoyed the class. Thank you Garry for making the class fun.