Liken' Lichens a Lot Lately...Fall Report from the Sierra Foothills 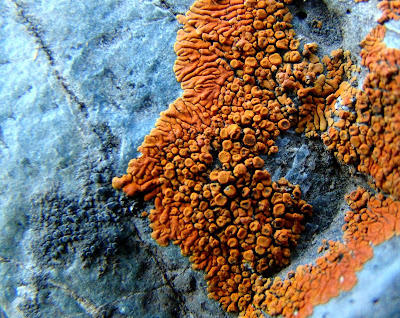 It was a beautiful sparkling clear day following yesterday's storm that dumped 3-4 inches of rain on many parts of Central and Northern California, so we decided to do our first fall reconnaissance in the Sierra Nevada foothills. We drove up Marshes Flat Road between LaGrange and Moccasin and found that fall really hasn't arrived yet at the lower elevations, just a bit of yellowing among the sycamores. 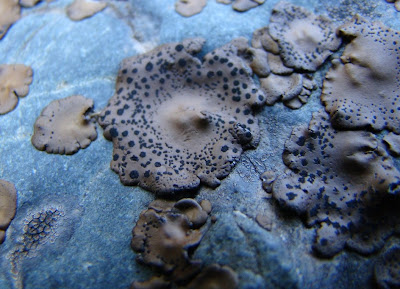 We did stop for a few moments to look over a rejuvenated brook, and I took a closer look at the rock surfaces, which consisted mostly of metamorphic greenstone and ultramafic serpentinite. My attention was drawn to the lichens on the rock surface, and I took some macro images. The lichens occupy a strange world we don't see all that often. They live on a different scale at the interface between rock and atmosphere. The acids they produce are one of the elements in the weathering and chemical breakdown of exposed bedrock. 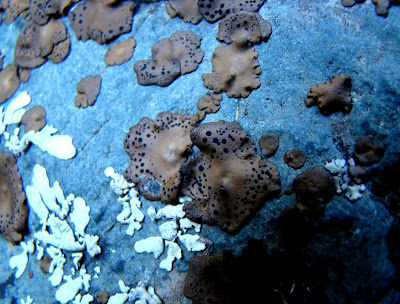 Lichens are a complex symbiosis of algae and fungi. There are probably 500 different species in nearby Yosemite National Park, though only 100 have been so far cataloged. I have really only just begun to study these fascinating life forms closely. 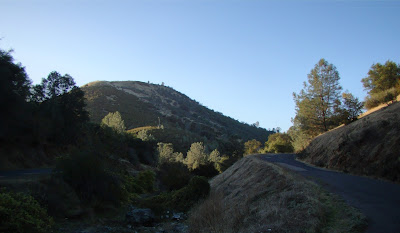 Marshes Flat Road is a nice quiet avenue that crosses the high ridge east of Highway 49 between Coulterville and Chineses Camp. Paved, but mostly 1 1/2 lanes, it offers some nice views and excellent wildflower displays in the springtime.

It's an entirely different region, but I am also offering my favorite shot of a lichen, a display from a basalt boulder in the Mojave Desert Scenic Preserve in southern California. The colors are stunning to me. Lichens survive in a lot of tough environments! 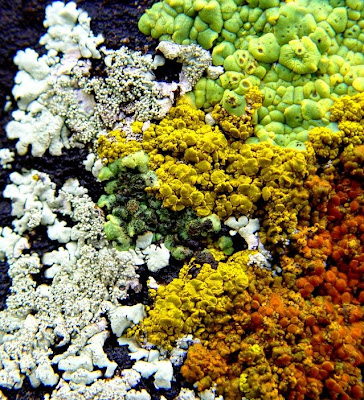 Wow, the lichens in the Mojave photo are stunning. I don't think I've every observed such colorful mix together. Do you know if there was something particular about the conditions at the location that might have made the mix more likely?

The lichens were on a chunk of basalt on the north side of a lava flow, so it was shaded from the worst of the sunlight. I think it was a cooler microclimate, as the basalt was highly jointed, and probably emitted cooler and maybe moister air. That's as much as I can figure...

I love your lichen photos! Ever since I learned about lichens in Botany, I have really enjoyed photographing them and adding them to my collection of plant photography. Now I really want to go camping in the Mojave Desert!