Gotthard Base Tunnel Breakthrough: Why Go Through a Mountain When You Can Go Over It? 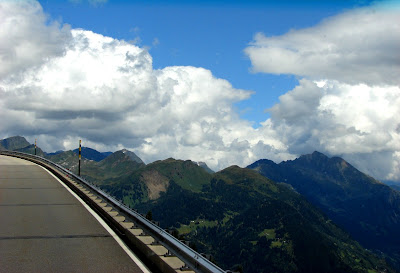 I've been kind of inundated by work, so I missed a few stories this week, but the news of the milestone in the construction of the world's longest train tunnel through Switzerland's Gotthard Pass caught my eye (see the rather incredible tunnel video at the bottom of this post). It's quite an accomplishment, digging a 35 mile-long hole through the Alps, to replace a much older 9 mile-long railway tunnel (dug in the 1880's at a cost of 200+ lives). There is also an exceedingly long auto tunnel (10.5 miles) that was completed in 1980. It is the third longest auto tunnel in the world.

I admit that tunnels fascinate me and I enjoy the concept of driving through a mountain, but I have noticed that they are dark, and the rocks are usually covered by concrete. I found going through the Chunnel to be kind of anticlimatic, for instance. A few years ago, I had the opportunity to make the journey from Italy through Ticino to Lake Lucerne, and our route called for the bus to go through the Gotthard Pass Tunnel. I looked at the maps, and saw that there were actually two highways that go over Gotthard Pass (6,950 feet). We were on a geology tour, so we politely requested (okay, we begged) for the bus to take the high road instead of the tunnel. We did, and it was spectacular! 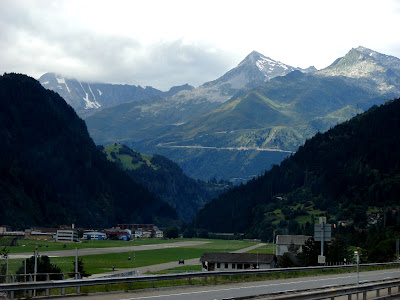 The photo above is the view from near the entrance to the big tunnels. Our highway can be seen switchbacking up the slope of the peaks beyond. Gotthard Pass has been in use for centuries, with foot traffic beginning in the 1200's, and the first carriage crossing in 1775. Part of the cobblestone highway can be seen snaking up the mountain in the picture below. 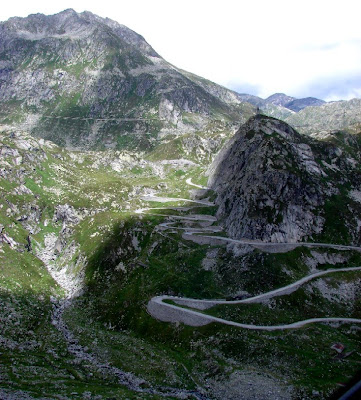 Meanwhile, our highway also climbed higher and higher, and the views just got better. It was my first journey through the Alps, and I was mostly impressed. The one big complaint is that almost all the landscape was marked by human developments of one sort or another: railways and highways, power lines, avalanche control measures. Still, the mountains were beautiful, and we were so happy not to be driving through a dark tunnel. 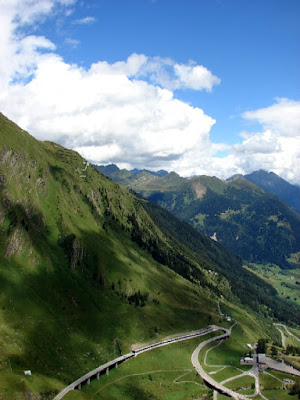 We stopped at the top of the pass, and were surprised to see a rock shop (the "Krystallgrotte") perched on the high cliffs! We explored a bit, and started down the other side. We soon realized why they wanted a tunnel. The road winds through a number of deep gorges, and passes over the Devils Bridge (the Teufelsbrucke), which allowed passage over a particularly dangerous part of the Reuss River in the Schollenen Gorge. According to the legends, the Devil offered to build the original bridge, as long as the first one over the bridge would give up their soul. The local villagers thought about it, agreed to the deal, and then made sure the first one over the bridge was...a goat. The Devil was a bit irate, and picked up a huge boulder to smash the bridge, but was confronted by a cross-bearing old lady. He fled... 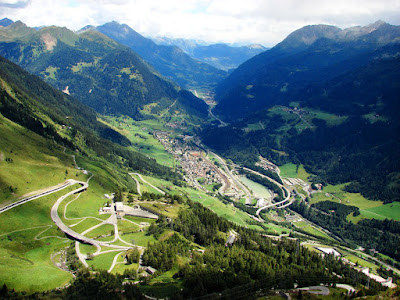 I can understand the desire of the Swiss to shorten the trip across the Alps, especially when hauling goods, but there is certainly a lot to be learned from following the old highways. It was a stunning day that we could have missed entirely.

I'd prefer the over land route, never been too trusting of human made tunnels and mines. The road looks like an engineering feat with views out of this world awesome.

Driving through a mountain is boring, but walking can be much more interesting, especially if the tunnel hasn't been lined with concrete. Have you ever been in Burro Schmidt's tunnel, in the Mojave? It's only a quarter mile long, but has a couple side branches where Schmidt thought he found "pay dirt" along the way.

I saw Burro Schmidt's tunnel on "California Gold" but haven't been there. I did explore a copper mine at the south end of the Nopah Mountains that included a straight adit at least a half mile long. It was fascinating.