The Other California: It's a Real Grind...Chaw'se State Historical Park 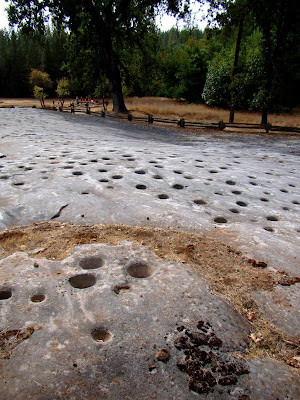 It didn't take some folks very long to recognize Saturday's Mystery Photo...if you've been there, it's kind of hard to forget. The slab of rock at Chaw'se Grinding Rock State Historical Park has more than 1,000 mortar holes, and is one of only two places in the state where petroglyphs are found in close association (below). 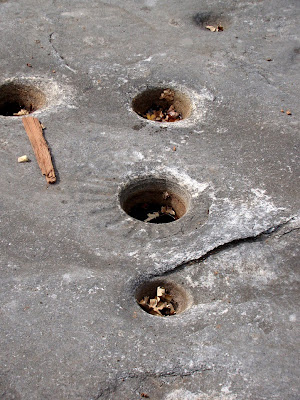 The site is of great cultural significance to the local Miwok people and other Native American groups and there is an excellent museum at the park, as well as reconstructions of typical village architecture. The park even provides opportunities for camping in the structures; it must be a unique experience! 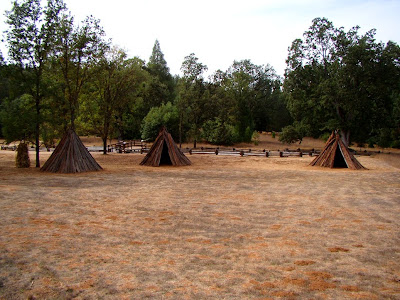 Our interest in visiting was geological; it was a field studies course after all. The slab of rock containing the mortar holes is not composed of granite, as many people might expect, being as we were the Sierra Nevada. As it turned out, we didn't see a single outcrop of granite during our journey between Chaw'se and Columbia State Historical Park 45 miles to the south. We were following the Sierra Nevada Metamorphic Belt which contains the Mother Lode that was the source of much of California's gold. Gold doesn't occur much in granitic rock, at least not in the Sierra.
We were traversing a stretch of the Calaveras Complex, a sequence of Permian-Late Triassic rocks that formed in a subduction zone, where the oceanic crust of the Pacific Ocean basin was forced beneath the western edge of the North American Continent. The rocks were churned up into a mess of slate and chert called a melange. The melange includes huge blocks of limestone (marble, actually), greenstone, and other metamorphic rocks that can be several miles across. It is one of the marble blocks that provided the huge slab that served as the base for the grinding stones.
Marble, like limestone, is composed of calcium carbonate (the mineral calcite), which many people associate with cavern development. Indeed, our previous stop that day was a tour of a beautiful little cave only two miles away. The region is pretty well honeycombed with dozens of caves that just beg for exploration (contact the local speleological society if you are interested in learning more about it). Pictures of our tour of the cave will be coming soon.

The Other California is my continuing series of the lesser known corners of my beautiful state, and the unique geology that can be found there. I don't know the entire state as well as I wish, and would welcome a guest blog on one of your favorite hidden places!
Posted by Garry Hayes at 10:54 PM

Marble is not the most durable choice for a grinding stone, but I'd have to guess that the Miwoks who used these didn't suffer much acid indigestion and maybe not so much tooth wear as others who used more durable (quartz & feldspar based) mortar & pestles.

I have to agree with Ron about the native health issues. Glad you got to explore a cave while there.