The Other California: The Thicket of the Devil (Saturday's Mystery Photo Revealed)

Saturday's mystery photo was quickly identified by several readers, which didn't surprise me, given the uniqueness of the Transamerica Building of San Francisco. If I had put my other picture up instead, even more people would have identified the city in a split second: 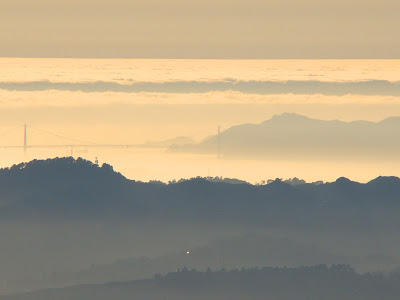 You may have to click on the photo above to see it, but that's the Golden Gate Bridge and Marin Headlands in the far distance. Most of those who guessed where I was considered the hills above Oakland, which certainly makes sense, but JRepka came closest when he speculated that I might have been using a zoom lens while standing on Mount Diablo. That's exactly what I was doing.

Mt. Diablo holds a special place in California history. Anyone who owns property in the central part of the state quite likely owes the accurate locations of their land to the presence of the peak at a sort of structural nexus over the Sacramento Delta. The peak is relatively short, not even quite 4,000 feet, but its position allows one to see an incredible swath of real estate, from Lassen Peak to the north, to the vicinity of Sequoia National Park to the south, much of the Central Valley, and the Bay area from Loma Prieta Peak to St. Helena Peak. Soon after California became a state, Diablo was selected as the initial survey point for the grid pattern that established property lines in the state: the Township and Range System.

Without going into gory detail (that privilege belongs to the unfortunate students in my lab this week), the Township and Range system established consistent survey boundaries at a time when the federal government was using the prospect of free land to aid in the "settlement" of the western United States in the late 1800's and early 1900's (we shall disregard for the moment the fact that numerous Native Americans had lived on that land for centuries, and had to be "cleared" off of it to make room for "settlers"). By occupying and farming the land for five years, practically anyone could own their own piece of land. 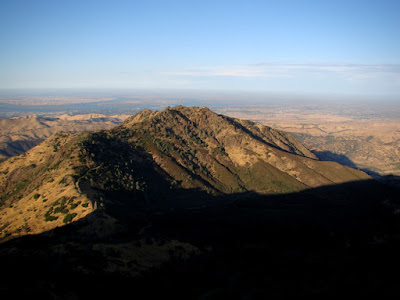 The spectacular view from the summit led early on to claims that Mt. Diablo had the greatest "viewshed" in the world (viewshed: the total amount of land visible from the summit). This claim has been debunked, but the misconception persists. The fact doesn't detract from the stunning vista from the summit observation deck.

The name of the peak relates to a story from the early 1800's when some Native Americans (Chupcans) escaped Spanish control and hid in a willow thicket. The Spanish soldiers called the place the "Thicket of the Devil" (Monte del Diablo), but the name was later misinterpreted as Mount Diablo.

The peak and surrounding landscape is protected today as Mt. Diablo State Park, which encompasses some 20,000 acres (park brochure here). The park is nicely developed with picnic areas, group and individual campsites, and an extensive system of hiking trails. The park is very popular with Bay Area folks, but I suspect the mountain is little known outside of California. It is well worth a visit when you are in the region.

Lessee, the park's name, the survey stuff, the park facilities, the view, what am I forgetting? Oh, there's no description of the geology of the park. It's fascinating, but too extensive to cover tonight. Look for it in a coming post!

The Other California is my series on the lesser-known but geologically interesting corners of my beautiful state.

Great views indeed. But me thinks you're slipping Garry to blow off the geology until later. Guess I can wait. Great captures with the zoom.

Southern California has it's own initial survey point, on Mt. San Bernardino. The base line is easy to find: it's located in the middle of Baseline Road!
I'm looking forward to reading about Mt. Diablo geology.

A very similar view can be had from the Lawrence Berkley lab hilltop campus. You don't need as much of a telephoto there though.

Oh, please do the geology soon. We recently had a family get-together on Diablo. After, my sweetie and I tried to make sense of the geology based on maps. Unfortunately, we couldn't figure out where Diablo was on the maps (they weren't detailed enough). The geology in that area is crazy!

Randy, I grew up a few blocks from Baseline Road and remember being impressed when I found out why it had the name it did. Every time I stood on the road I wished I could be at the survey point up on San Bernardino Peak!