The Other California: The Prairie Lands and a Transforming Fault 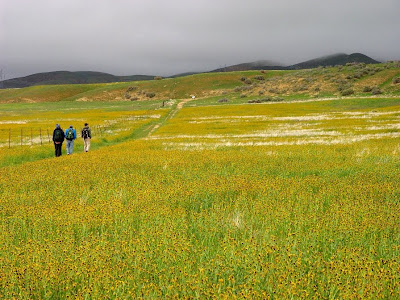 There isn't much left of California's original prairie lands. The Great Valley province was long ago plowed and paved into the nation's most productive agricultural center and the animals and plants that lived there extirpated or driven to extinction. A landscape that had once been the habitat of camels, horses, mammoths, sloths, bears, sabertooth cats, and condors is now planted in cotton, corn, almonds, and 500 other crop varieties. Still, areas exist that retain some of the character of those original prairies. I wrote about one of these regions in my first post of the Other California series. A rather large piece can be found at the extreme south end of the Great Valley, spilling over into the dry eastern part of the Coast Ranges. Welcome to Carrizo Plains National Monument! 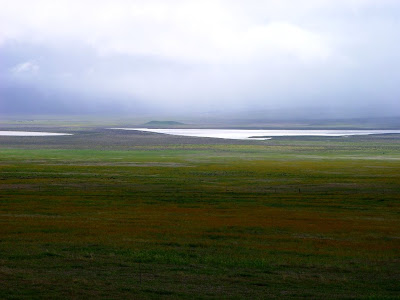 The Carrizo Plains are technically part of the Coast Ranges, separated from the main valley by the low ridge of the Temblor Range, but the dry flat valley floor is very reminiscent of the Great Valley. Protected by intervening mountain ranges that discouraged water development, and by low gas and oil potential, the Carrizo plains have generally escaped that kinds of changes that have irretrievably altered most of the original prairie lands of California. Some dryland farming took place here decades ago, and cattle graze in the region, but on the 250,000 acres of the monument one can find the pronghorn antelope, tule elk and other animals that once ranged across the whole Great Valley.
The monument is of extreme geological interest as well. The valley floor is an enclosed basin: water draining into the valley does not flow out, but instead fills the basin of Soda Lake (in the photo above). Interior drainages like this one are not "normal" and when they show up, faulting is often to be suspected. In the case of the Carrizo, the fault is a major one: the San Andreas, the transform fault that separates the North American plate from the Pacific plate. Wallace Creek, at the north end of the monument, may be the most famous example of an offset stream in existence. Almost every pictorial description of the San Andreas fault will include aerial photos from the monument (a shot of the park was also used as a plot device in the original Superman movie). In the picture below, the fault has formed a small enclosed graben valley. 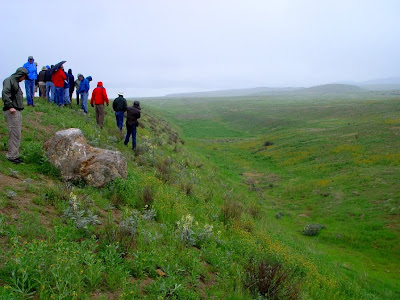 Lest you get the wrong impression, I visited the monument in March of a very wet year. Most of the time the grass is brown, and it can stiflingly hot in the summertime. The park's educational center is open only from December to May at this time, and facilities are very limited. But, it is a wonderful place to explore! 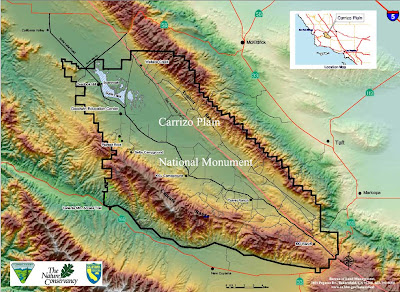 The main park web page can be found here, and an excellent geologic road guide is available here. Only 30,000 people visit the park each year, so they will be happy to see you!
Posted by Garry Hayes at 4:38 PM

Nice example of CA prairie. I didn't even know this NM existed. Another place to add to the CA must see list. Thanks Garry.