The Other California: Exploring the Volcano Underground

Continuing our series of where to go in California once you've seen all the places on the postcards....

As discussed in the previous post, California has a place with possibly the greatest concentration of lava tubes in the continental United States, some 700 of them, with around thirty miles of passageways: Lava Beds National Monument, on the flanks of California's biggest volcano, Medicine Lake Highland. Today's post is a brief photo essay on some of the kinds of things you can see underground at Lava Beds. 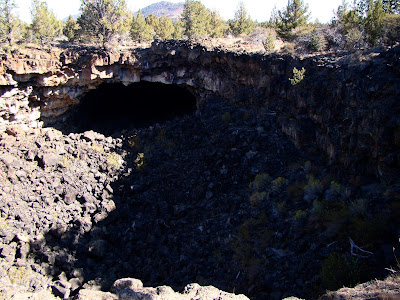 Two lava flows produced essentially all the lava tubes in the park. The first of these is the basalt of Mammoth Crater, which erupted around 30,000 years ago. Most of the caves occur in this unit. Mammoth Crater is a 1/4 mile wide, 340 foot deep pit at the south edge of the park which produced lavas that traveled as far as ten miles, producing a complex, multi-pronged tube system, shown on this map from the previous post. The Heppe Caves, above, are found just a few hundred yards from Mammoth Craters. The collapse pit in the picture is 168 feet across and 68 feet deep.
One oddity about Lava Beds is the total lack of open water in the monument: no creeks, no rivers, no lakes. Basalt flows become highly fractured as they cool and contract, and any water on the surface sinks quickly into the subsurface. Heppe Cave is one of the few exceptions, in that it often has a small pool at the bottom, probably maintained and sealed by underlying ice layers (the pool had disappeared when we visited in September). 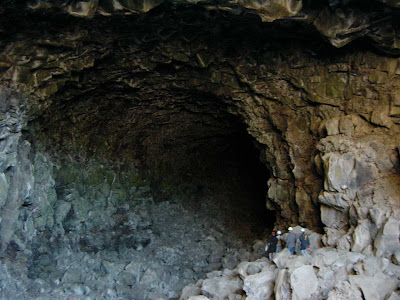 The largest opening in the park is found at Skull Cave, near Schonchin Butte. The opening, seen above, is 60 feet in diameter. Though relatively short, the cave has one unfortunate attribute: just at the point where it turns totally dark, it drops into a second underlying tube system. This natural trap led to the cave's name, as early explorers found numerous skeletons of animals and two humans who had fallen in the darkness to their deaths. A metal stairway makes for a safer journey today.
These tubes-over-tubes have another interesting feature. In the frigid winter, cold air sinks into the caves. When the surface over the caves warms during the summer, the cold air stays put, so some of the caves in the monument maintain ice all year long. The deepest part of Skull Cave contains a frozen pond and a number of icicles (the ice in the photo below was taken in September). Another cave in the park, Crystal Ice Cave, is renowned for complex ice formations it contains. Special arrangements must be made to visit the cave, and it has some challenging passages. 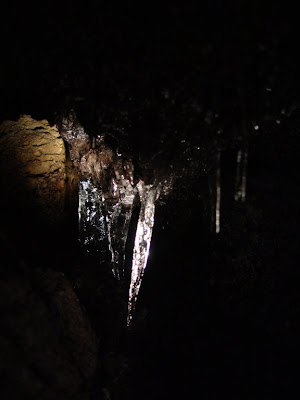 The basalt of Mammoth Crater covers two-thirds of Lava Beds, but another flow about 10,000-11,000 years ago produced some fine lava tubes as well. This is the basalt of Valentine Cave. Valentine Cave itself is one of the cleanest and easiest caves to explore, with high ceilings and few breakdowns. It has about 1,600 feet of accessible passageways and displays many of the typical features of underground lava flows, including branching passageways, lava pools and cascades, pahoehoe flows, lava benches, pillars, and lavacicles. 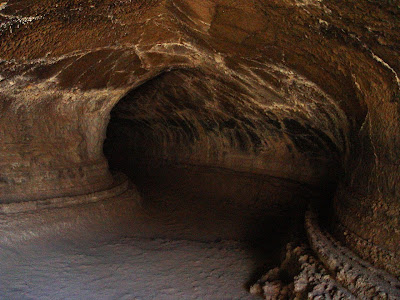 Photographing lava tubes is a challenge. Dark colored rock in total darkness does not show well when you use a flash. For amateurs like myself, the best results come from photographs near entrances (as above), or by using a time exposure, and "painting" the walls with flashlights as seen below (pros use strobes of course). I like the cave ghosts in the picture below; several people walked through the scene during the 30 second exposure. 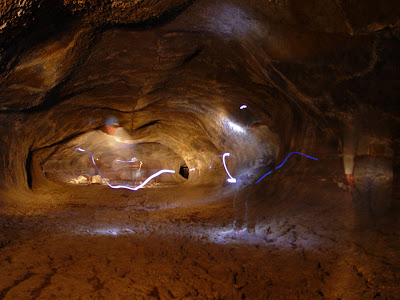 This other photo doesn't include ghosts, but shows the pahoehoe floor of the final lava flow in the tube, and some lavacicles on the ceiling. They can form as part of the ceiling melts while lava flows below. 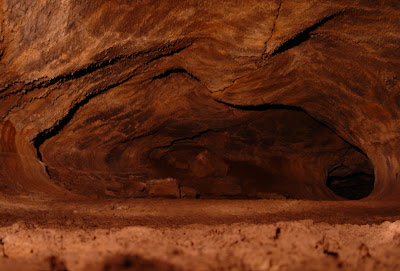 Below are some sharktooth stalactites (lavacicles) in another cave. They are one to two inches long. They are also a really good reason to wear a helmet when exploring these caves. Your head can damage these by breaking them off, but I fear a great deal more damage can happen to your skull (the park sells some nice "bump caps" for a couple of dollars). 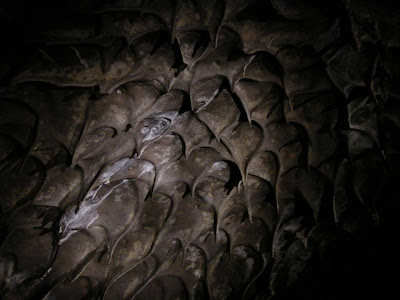 Tickner Cave (below) is also formed in the basalt of Valentine Cave, and is found close to the flows source at the south boundary of the park. It has a great many nice cave features, including a natural bridge. 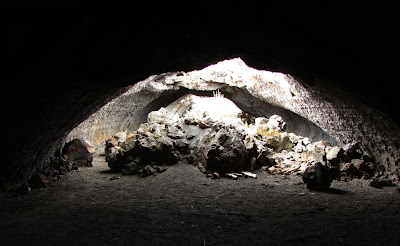 Lava Beds tubes are full of surprises. One special example is Fern Cave, in an isolated section of the park. The monument lies within the rain shadow of the Cascades and is classed as semi-arid. The tube openings sometimes provide humid micro-climates, and a lush growth of ferns native to the other side of the range is found just inside (below). The interior contains numerous pictographs from the original human inhabitants of the region. The site is sacred to the Modoc People, and special arrangements must be made to explore the cave. 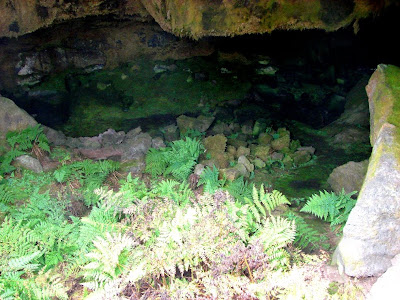 So there you have it...you've explored five lava tubes at Lava Beds National Monument! Less than one percent...looks like you will simply have to visit the park if you want to see more!
Posted by Garry Hayes at 2:02 PM

Awesome shots of the lava tubes Garry. It's not easy to do in the dark. I really like the long exposure with the cave ghosts.

Very cool photos! I've been in one of the tubes, don't remember which one, but it was easy to get to from the east.