2nd Blogoversary! Hanging in There 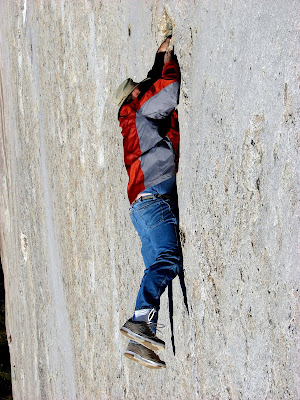 This week I join NOVA Geoblog, Lost Geologist, Looking for Detachment, and Dinochick (did I miss anyone?) in the ranks of geoblogs reaching their second anniversary! This year I managed to finish my long series on the geology of the Colorado Plateau, and I got off to a good start on a new series on the unheralded geological wonders of the state of California.

I've had a satisfying level of traffic during the year (via Statcounter), with a bit over 115,000 hits since last December. I really love reading the statistics. I had some interesting spikes, once in February when I got linked to a CNN transcript of Bobby Jindal's anti-volcano monitoring speech, in April when I got linked to the heavily trafficked Yosemite Blog (run by one of my earliest students; thanks Loyd!) because of the Ahwiyah Rockfall in Yosemite, and in August when I commented on some giant waves hitting the beaches at Balboa in Southern California. The October spike came when I commented on the Keeler Earthquake Swarm. I guess a lot of people were curious!

As I said at my first anniversary, this continues to be a lot of fun, not just the blogging, but to see the exploration of the world throughout the geoblogosphere. Many thanks are due to Chris at Highly Allochthonous for his blog feed, and also to the producers of the Geoblogosphere News. Both sites have become indispensible sources of news in the earth sciences. I fervently thank everyone who has paid a visit to my site, and appreciate more than you can know the comments and conversations that have taken place here....And, if you are tempted, give it a shot: blogging is fun!
Posted by Garry Hayes at 8:32 PM

Keep up the great work!

Happy Blogiversary! And nice stats! Your many series, including the Airliner ones you started with, have been quite enjoyable and well done, along with all the rest. (And thanks for reminding me.)