The Difference a Year Makes: Liveblogging the "Deluge" (Hint: There isn't one) 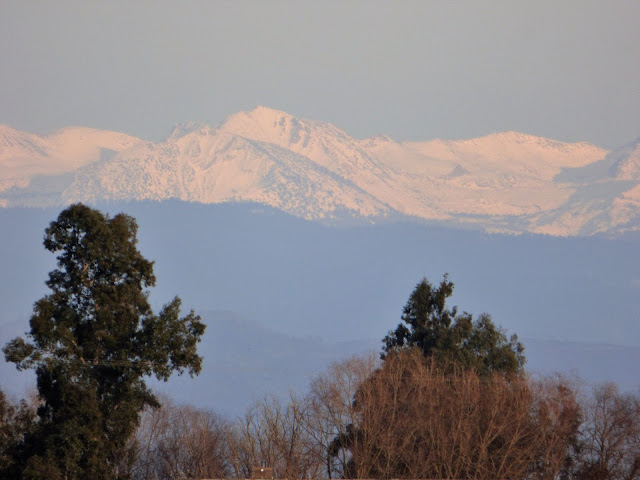 This post is both a look back at ten years of Geotripping, but is also an update on snow and precipitation conditions in California right now, and that picture is not pretty. My backyard rain gauge had amassed a mere 1.22" of rain by the beginning of January, and while January had higher than normal precipitation, I only show 4.66" for the rain year, just a bit over 50% of normal (I think we benefited from a few isolated downpours, as Modesto, just 13 miles away is at 3.09"). During the historic drought of 2011-16, three of the dry years were wetter than this. 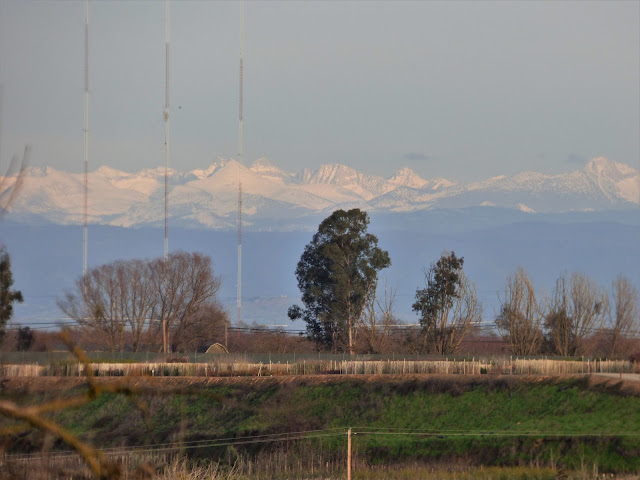 I walked the Tuolumne River Parkway Trail today, and for the first time in weeks I could see the Sierra Nevada, the peaks that loom high above Yosemite Valley. The sun reflected off a snowpack that was far different than it was a year ago. The snowpack is only 30% of normal (see below). It's late January and there are a few ski resorts that haven't even opened yet (if they'll even open at all).


If there is any bright spot in this dismal year it is California's reservoirs. Because of the ample rain and snow last year, most of the reservoirs are at healthy levels, more than 100% of normal (see below). One prominent exception is Oroville Reservoir, which was lowered drastically to allow repairs to the spillways that failed during the height of the storms last year. There is at least some comfort to know that we have some resources to weather another drought, at least for a few years. I would have preferred a few wet years to help replenish our depleted groundwater reservoirs. That is a lasting effect of the drought that may not be fixed any time soon.
The Tuolumne River Parkway is a changed place. During the deluge last year, river flows were maintained at or near flood levels through July. Much of the river floodplain was underwater for months, and hundreds of trees and shrubs were uprooted and carried downstream, in places leaving behind huge masses of dead vegetation. Riverside vegetation really never had a chance to recover and regrow once the water subsided. The hated invasive weed River Hyacinth is gone, but so are many riparian shrubs. The six month flood was necessary to protect human developments on the river, but it didn't do the habitat much good. I'm hoping that the wholesale redistribution of river gravels will do the Salmon and other river organisms some good. I have run across signs of beaver, otter, raccoon, and foxes on the floodplain in recent days. 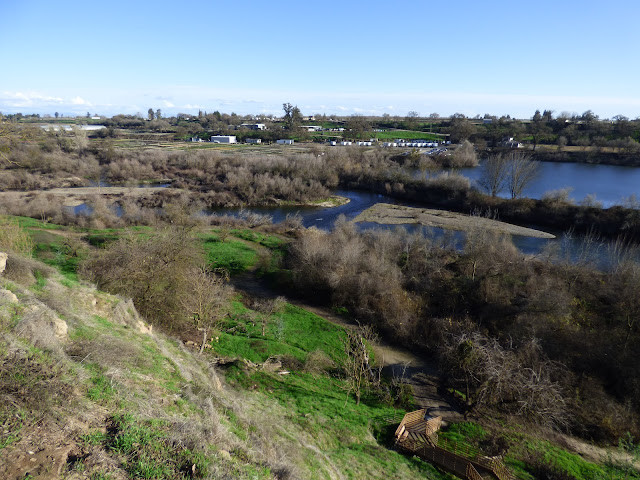 I've been going through the Geotripper archives to select some of my favorite blog posts of the last ten years. The first half of 2017 was dominated by my observations of the extraordinarily wet year and the flooding, which I called "Liveblogging the Deluge". I wrote dozens of posts all through the first half of the year, and it was hard to pick any particular ones to illustrate here, so I settled on the one I wrote exactly one year ago. It involved the post-mortem of the first of the major atmospheric river storms that battered the state. Many more were to come...

Liveblogging the Deluge: The Post Mortem...Storms That Made a Difference

The atmospheric river storms of January have finally subsided, and we are looking at kind of a new landscape across California. We had a couple of sunny days, so we headed up the highway to have a look at Don Pedro Reservoir on the Tuolumne River coming out of Yosemite. When we visited on January 5, the lake stood at 786 feet, which translates to 76% of capacity. That was 114% of normal for this time of year, which was a relief after five years of intense drought.

When we arrived yesterday, the lake stood at 813 feet, or 90% of capacity, which is 133% of normal. It is only 17 feet below the level of the dam. It could have been higher, but the dam operators have been maintaining constant outflows in the range of 7,000-9,000 cubic feet per second, a level that is just short of flood stage. Had they not done this, the lake could have overflowed and flooded downstream urban areas as happened in 1997.
It is a similar picture at the major reservoirs all around California. The monster reservoirs, Shasta and Oroville, are at more than 120% of normal for this time of year. San Luis Reservoir, the critical link in the California Water Project, is 103% of normal, and may fill for the first time in five years. A few are still low, most notably New Melones (68% of normal), and Trinity (84% of normal), but they are way up from where they stood before the storm.
The picture in my corner of the woods is brighter too. The Tuolumne River is running fast and cold, and in many places it covers practically the entire floodplain, and has done so for several weeks now. I believe that most areas downstream are not affected by the high flows (there is a history after all of flooding, and outflow from Don Pedro is regulated so as to prevent it). Instead the river is flushing itself of invasive hyacinth, which has been threatening numerous creatures and plants. Gravel bars are shifting and accumulated silt is being removed, providing better nesting areas for salmon and other fish species. Silt is being redistributed across the floodplain, rejuvenating the soils of the riparian areas. Groundwater aquifers in the vicinity of the river are being recharged.

But the real story? The snowpack.

At the height of the drought, we had a snowpack that was 5% of normal. 5%! It was both unbelievable and appalling.
This year started out with some good healthy storms, but the January events threatened to undo the progress. On the first of January, the statewide average was 70% of normal, which was an improvement over the last five years.The atmospheric rivers began as warm tropical storms that threatened to melt what snow there was. At first they did, but colder arctic are started to move in and the snowpack began to build. After the first set of storms blew through, the statewide snowpack had improved to more than 100% of normal.

And the snow kept falling! The second atmospheric river storm system brought even more snow, and as of today, the snowpack is nearly 200% of normal. If the trend continues (there is NO guarantee of this), we could be on track for a record snowpack. I don't consider it likely, but it would be nice to start recharging the groundwater aquifers that have been severely depleted in recent years.


The record snowpack should not be seen as evidence that global warming isn't happening. Average temperatures are defiinitely up and have been for several decades. The thing is, snow is snow whether the temperature is 15 degrees or 30 degrees. A not-at-all unusual heat wave could undo the progress in the snow levels. The sky spigot could turn off. After the record flooding of 1997, February and March both provided less than a quarter inch of rain over the entire month. And the drought will never be truly over, as demand outstrips supply even in plentiful years. And little is being done to replenish declining groundwater aquifers.

All in all, though, I'm happier to have plentiful rain rather than crippling drought!
Posted by Garry Hayes at 12:27 AM