A Singular Moment...Okay, Three of Them: A Total Eclipse, Ten Years of Geotripping, and the 2,000th Post

At last, the exploration through ten years of geoblogging is complete! I've been going through the archives looking for my favorite posts and we've reached the end of 2017. I was trying to decide what post from 2017 could serve as the final one from this short mini-series, and I decided it needed to be about a singular event, one that I was not likely to experience again. But in this post, there are three. There's only one time one gets to have a tenth anniversary of anything. And there's only one time that a person reaches a numerical milestone, and this post is one of them. It's the 2,000th post on Geotripper! And the third, out of the archives, was my adventure to see the total solar eclipse that took place last August. I'll be in my eighties by the time it happens in the continental U.S. again, so I expect it was my last.

Whether we would even see the eclipse at all was a dicey proposition. We were on the coast of Oregon, and although mornings had been clear all week, the morning of the eclipse was foggy. We had a great spot on a beautiful section of coastline at Seal Rock State Park. In the end, the fog never lifted, but we had a view anyway, and one of my pictures was different enough to be featured on EarthSky.com (link at the end of the blog).

As for the whole 2000th blog and ten years thing, mostly I'm surprised that it went on this long. I had no way of knowing at the beginning that I would find enough to talk about, but frankly the Earth is a place of unending fascination, and there is always going to be something incredible going on somewhere, and there will always be a new place to see, a new adventure to experience. I don't know what lies ahead, but my intentions are to make the world knowable to as many people as possible.

There are many reasons for this, and chief among them is the age-old human desire to tell stories. But even more important in my mind is the need to defend the Earth. I could never have foreseen that we would be cursed with such a greedy and ignorant administration as the one that exists now in Washington. They deny the reality of climate change, and they have shown an eagerness to sell off and open to mining and drilling the most precious of our public lands. They are trying to dismantle the system of controls and regulations that protect our air, soil and water. This course of action is morally wrong and physically unsustainable.

Ignorance and greed can and will destroy the fabric and stability of society. I will continue to blog about our planet because I think we need more storytellers, and we need more scientists. I hope we can continue this journey together for a long time! 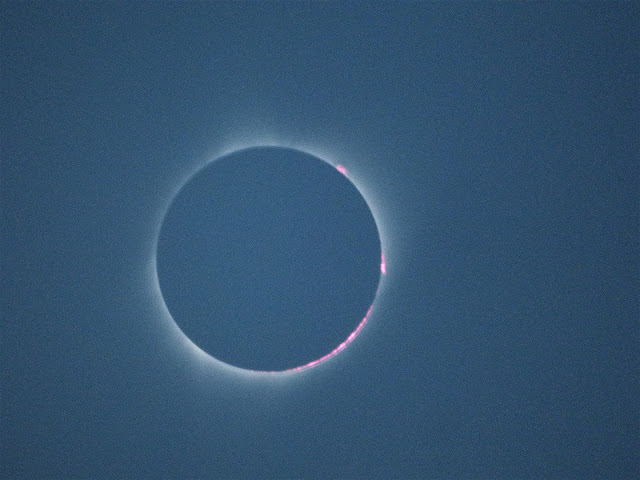 Yeah, I was really taking a chance, choosing to stay on the Oregon Coast for the 2017 eclipse. The reason? The fog. And there was a lot of it. To make the long story short, it never really lifted, but we could still see most of the sights through the clouds. I didn't get to see much of the corona, but there were lots of Solar prominences to compensate. It was an awesome experience in the end, but my nails are bitten down to the nubs! 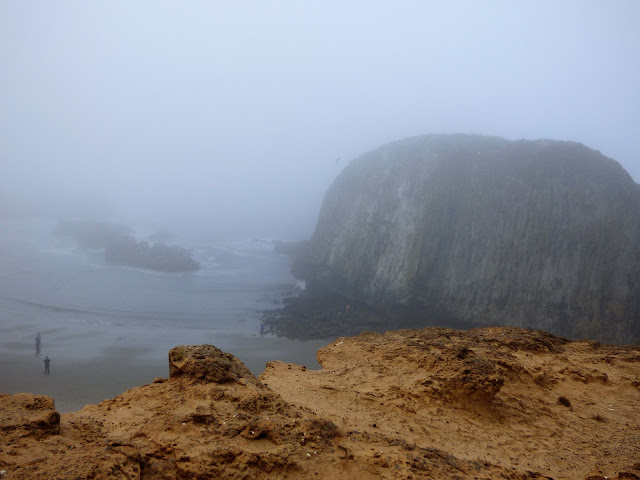 We started out from Florence at 4:40 AM, not wanting to miss a parking spot. There was not a lot of traffic, and we were absolutely thrilled to see parking spaces at Seal Rock State Park. The fog was a concern, though, and the sun was still not at all visible at 8:30. 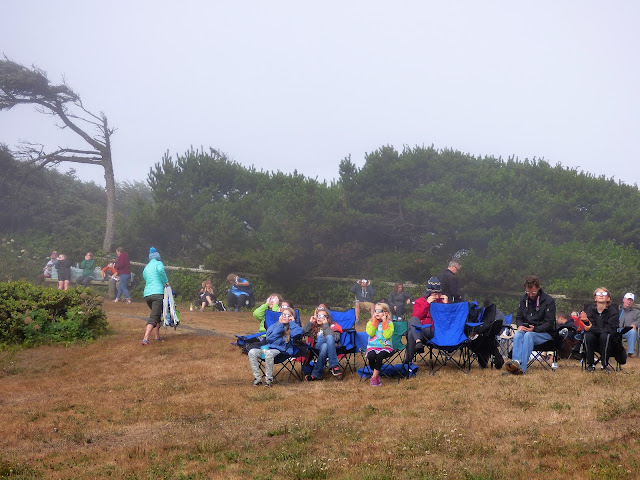 The crew at Seal Rock was stubborn though. There was some discussion of trying a different spot, but most everyone stayed, hoping for a break in the clouds. It never happened, but the clouds thinned enough that the Sun shown through. I suspect that made things a bit more dangerous, because the clouds made the eclipse glasses almost useless, and UV light could still damage people's eyes. I trusted my cameras to filter things for me (I was shooting with two Panasonic Lumix DMZ FZ70 with a 60x zoom; one on a tripod, the other handheld). I started snapping photos. 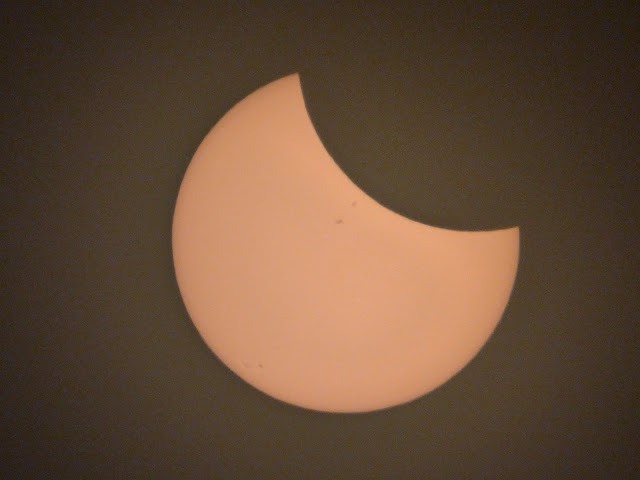 At the beginning, the Sun was the show with a couple of sunspots visible, one almost dead-center, and the other near the lower left quadrant. 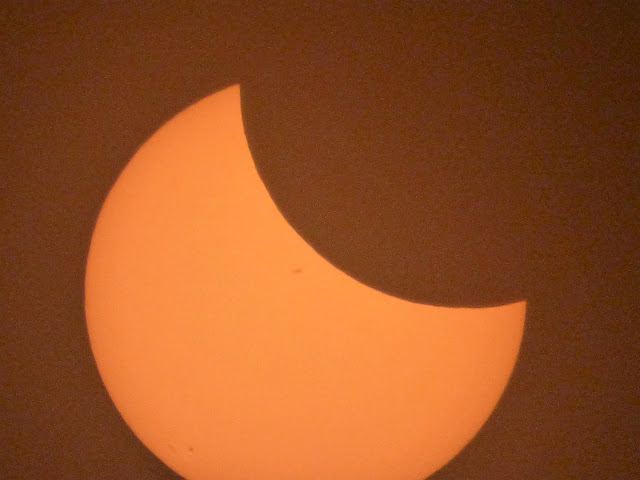 More of the Sun's surface was covered, and it was becoming difficult to focus on the crescent sun in the rapidly dimming light. 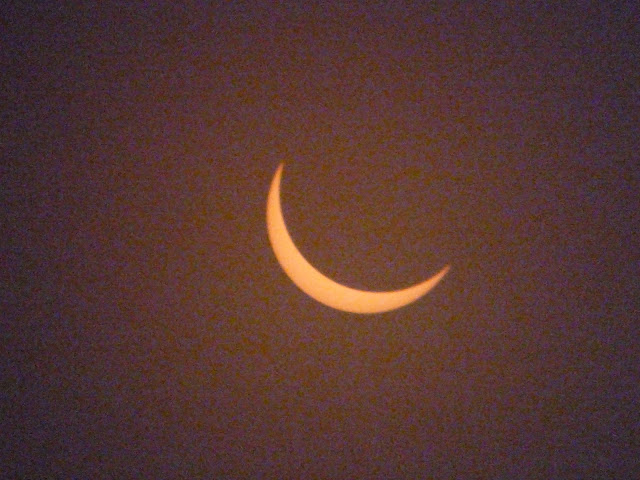 Despite the warnings, I realized I could get pictures at this point without the filter, so the next couple of pictures are the true color of the Sun: white. 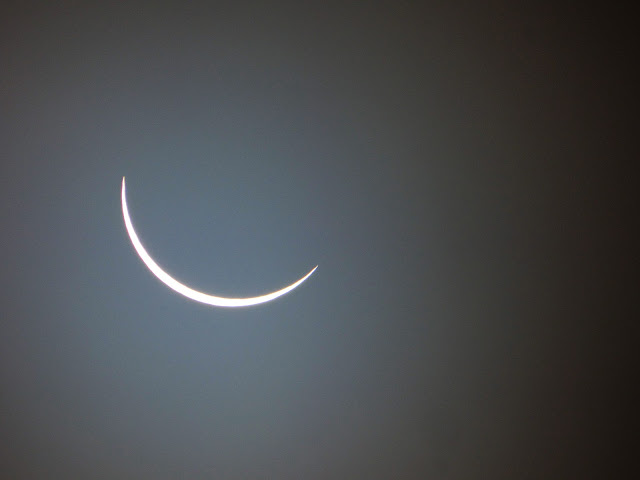 The discontinuities on the right edge of the crescent below are mountains on the Moon splitting up the sunlight. 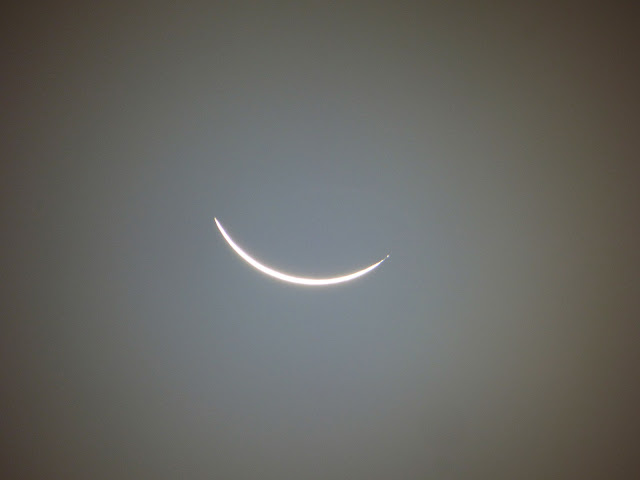 The crowd at Seal Rock had been chattering away throughout most of the buildup to totality, but there was a sudden hush of shock and awe as the Sun suddenly disappeared, and it was as dark as night. 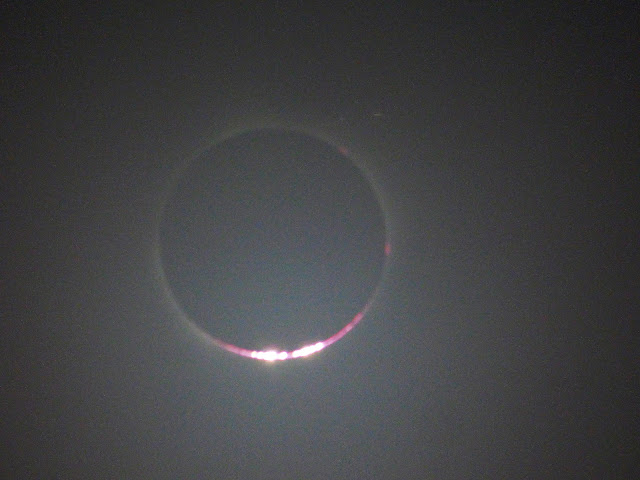 The Solar prominences glowed pink around the margins of the disk. As noted before, the corona was not visible through the fog. 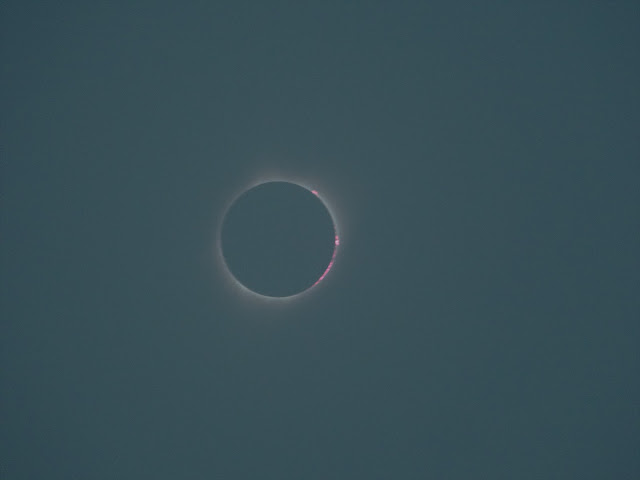 There was an audible gasp in the crowd as the first streaks of light appeared on the other side of the Moon. The prominences quickly disappeared in the bright shinning light. 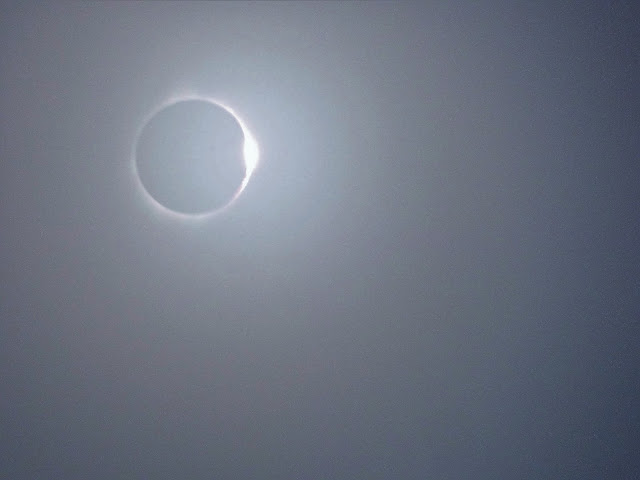 And then totality was over as the sky began to lighten up after 1 minute and 25 seconds of darkness. We didn't get to see the stars and planets, but I was not going to complain. What we saw was simply awe-inspiring. I understand that not everybody can drop everything and go across an entire country to see a shadow for less than two minutes, but if you ever have an opportunity, don't pass it up! It's a common experience of humanity to see the Sun blotted out by the Moon, and witnessing one in person can help one understand the myths and legends that grew around eclipses. I literally felt like shouting for the dragon to let the Sun back out of its mouth. 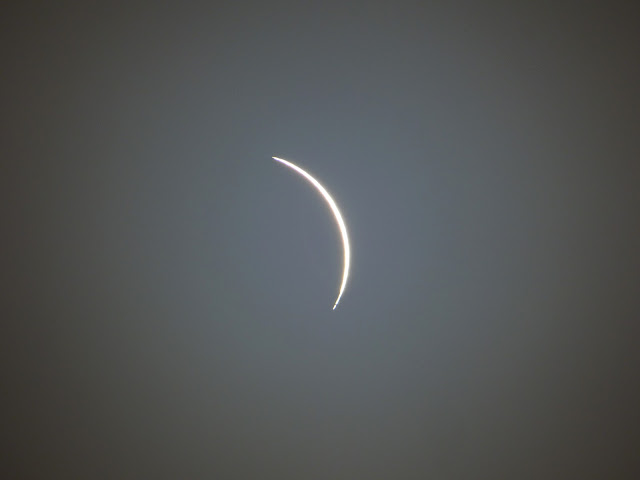 Update: Very pleased that EarthSky posted one of my pictures! http://earthsky.org/todays-image/photos-aug-21-2017-total-solar-eclipse
Posted by Garry Hayes at 10:12 PM