A Look Back at Ten Years of Geotripping: Geotripper Rates Hollywood Movie Geologists

This week is the tenth anniversary of Geotripper, so I am dredging up some of my favorite posts from over the years. During the early days of geoblogging, there was a monthly carnival called the Accretionary Wedge, where bloggers and commenters tackled particular geological issues. In March of 2008, the topic was the favorite (or least favorite) depictions of geologists in movies. This was my list.

Some additions  are needed since a few more movies have come out since 2008. First and foremost was "San Andreas" with the Rock, and Paul Giamatti as a paunchy bearded hero geology professor named Hayes. I reviewed the movie in this post from 2015. I was struck that the "hero" of the movie saved around four people, while the "B"-plot geologist saved maybe millions of lives. The movie was also notable for showing a fellow geologist who was Asian (but he died in the movie, of course). "2012" was also notable for having an African-American as the lead geologist in an otherwise ridiculous movie. (Update: RA reminded me of Orlando Jones as Harry Block, USGS Geologist in the 2001 movie "Evolution". "It'll definitely lead us somewhere. Geology is not an exact science".)

While researching for this post, I came across an excellent review of geologists in movies in Earth Magazine which actually analyzes whether geologists were women or minorities, whether they were evil or not, and whether they survived to the end of the movie. I highly recommend it!

What other movie geologists am I forgetting?? 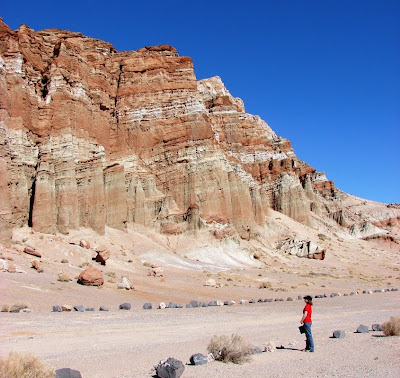 
Despite having grown up in southern California, and having lived through the 1971 Sylmar quake, I have never taken a picture of the Hollywood sign, so I offer a photo of a favorite Hollywood set, especially in the old westerns: the cliffs of Red Rock Canyon State Park on Highway 14 in the Mojave Desert. The rocks are Miocene continental floodplain sediments lifted up by fault motions on the Garlock and El Paso fault systems. John Wayne should come riding through any moment now....


My favorite geologists in the movies

Speaking from an entirely gender-biased point of view, Finn wins my vote as the finest portrayal of a geologist in a Hollywood movie. Intelligent and creative, and cute, too. And finding strange underground worm things using a seismometer.

Rachel didn't get much credit for being the first Hollywood geologist to get sucked into a volcano, but she displayed many of the traits of the real geologist: self-effacing, nervous in front of cameras, and yet a good and perceptive researcher. Of course, she wasn't a leading character. The actual 'star' of the film, Anne Heche gets honorable mention for looking at a topographic map on-screen, but then using a basketball to confirm that a street does in fact slope downhill the wrong way.

James Bond as volcanologist?? Well, I dunno...too clean-cut, too shaven, too cultured. Now, the rest of his team, though, they were more like the people I see and work with on a regular basis. Coffee addicts, intense, and lovers of volcanoes. Some of the portrayals of geological processes were done pretty well, except for that really fast-moving Hollywood lava, and driving a truck through said flow without dying from the radiant heat. And that acid lake that killed grandma. And that overly steep giant Hollywood volcano in Idaho. I really liked the bridge that got washed out at the end of the movie, though.

In his pre-"Deep Space Nine" days, Rene played a geologist who thought that the mysterious uncharted island was hiding a lot of oil. When shown to be wrong, he did what many geologists are known to do...he got drunk.

The second or third line of the movie had Julia Roberts saying "I love geology". I melted on the spot and was hers from that point on. Though she was actually a legal clerk and not a geologist, she was shown researching groundwater chemistry, taking samples of poisoned water, pulling dead rotting animals from wells, and running away from security guards after trespassing on company property. All in a day's work for any field geologist, I should think.

O.K., so he was really an archaeologist, but he dug in the earth a lot, and the character was said to be based on Roy Chapman Andrews, an adventuring paleontologist who explored the Mongolian deserts in search of ancient life in the 1920's. His expeditions found the now renowned Flaming Cliffs which contained fossils of protoceratops, oviraptor, and that most famous of movie dinosaurs, velociraptor. His party also discovered the nests of some dinosaurs, containing egg clutches in concentric circles, and some very rare Cretaceous mammals. They were chased by bandits and assaulted by horrible dust storms. And what geologist doesn't dream of dramatic adventures in the field?

His character was ok, but I was most impressed by the office trailer for the paleontology dig in Montana; messy, dusty, newspaper clippings on the wall, lunch mixed with research; a true geology office! The third movie in the series mostly had people getting eaten, but as usual, the dinosaurs looked pretty cool.


Come to think of it, there weren't many paleontologists in this movie, except the guy in cowboy hat with the long beard who looked a lot like Robert Bakker. I think he got eaten by a velociraptor...(Update: I completely forgot that Julianne Moore was most certainly a paleontologist in the movie).


I don't really remember much about the geologists, but I loved the "element" they used to drill into the mantle and core in only two or three days; it was called "Unobtainium". And that giant mantle amethyst geode was pretty cool, even if the crystals killed some of the crew members.

Handsome guy, looking for a dinosaur bone with beautiful Katherine Hepburn at her best, a pesky dog and a pair of leopards. What more could you ask?

A geologist willing to ride a dogsled for a week, face down avalanches, blizzards, crevasses, frostbite, a broken leg, and a fall into freezing cold water, all so he could find a meteorite in Antarctica. How he knew to look for that particular meteorite on a rocky mountainside as opposed to the surface of a glacier, I don't know. And they left those poor dogs behind....
Posted by Garry Hayes at 11:29 AM

Garry, I was a biochemistry undergrad at CSUF when Orlando Jones and David Duchovney filmed some scenes in McCarthy Hall for Evolution. Fresh off of X-files addiction I spotted Duchovney down the hall during filming. Thanks for pointing out Orlando was a minority Geologist. I need to re-watch.

Hmmm, now you've given me a few more movies to search for... Always a pleasure to read your take on geologists in movies!