Standing in the Cold Fog So You Don't Have To: The Superduper Blue Blood Moon Lunar Eclipse of 2018 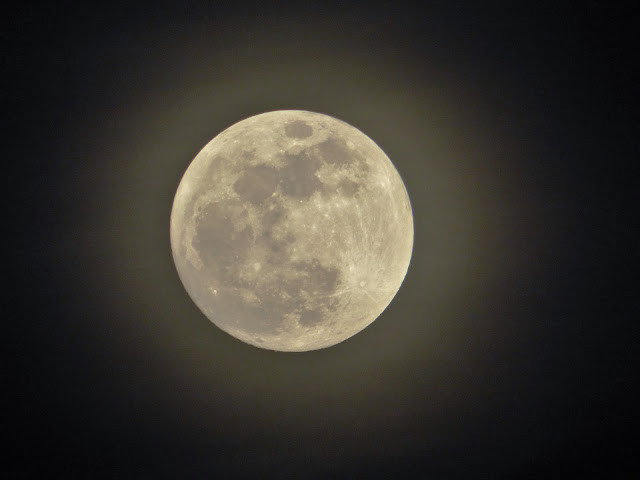 That's the chance you take living in our Great Valley in Central California. The Tule Fogs are a way of life, and this is their time of year. If you want to be guaranteed an atmospheric/astronomical show it just can't be. But still I had to try. I took some pictures of the "Supermoon" yesterday evening in the hopes that I would see the eclipse in the early hours of the morning. Either the fog would be there or it wouldn't. 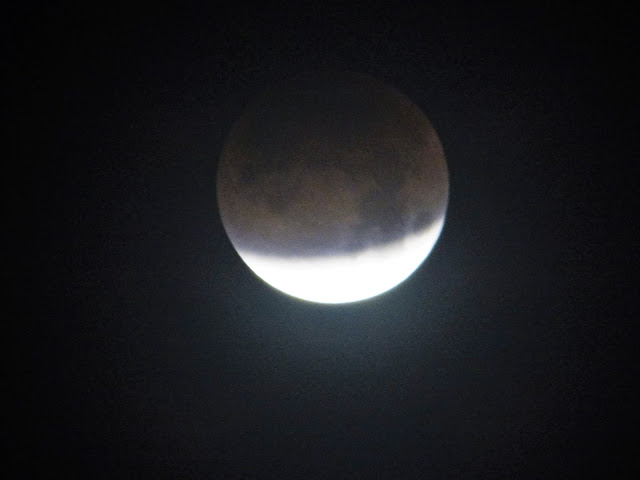 I got semi-lucky. There most certainly was fog, but it was mostly thick on the ground and the moon was still visible above. These shots may not be quite as sharp as they would be on a clear night, but they work. 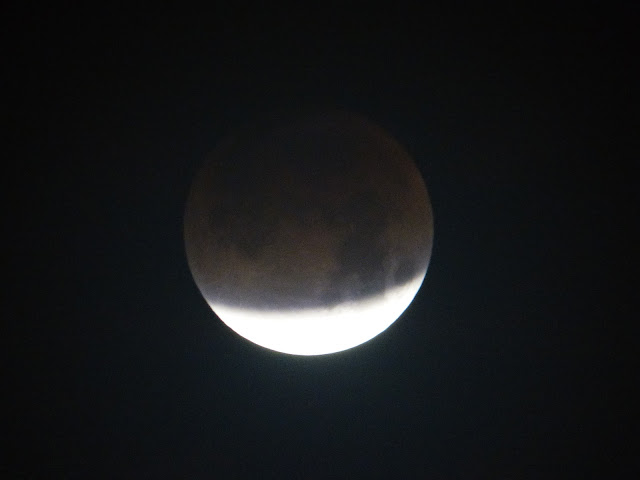 There are three oddities happening at once, although two of them can be said to be kind of arbitrary... 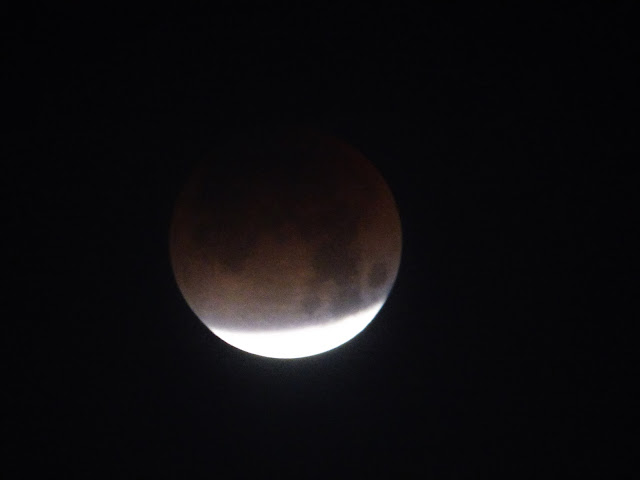 First, there's the Blue Moon. That's one of the arbitrary ones. The lunar cycle is 29.53 days, but some of our months have 30 or 31 days, so there can be two full moons in a month. This is the second full moon of January, hence the "blue moon". The term originally had to do with 13 lunar cycles in a full year, with one season having an extra full moon. 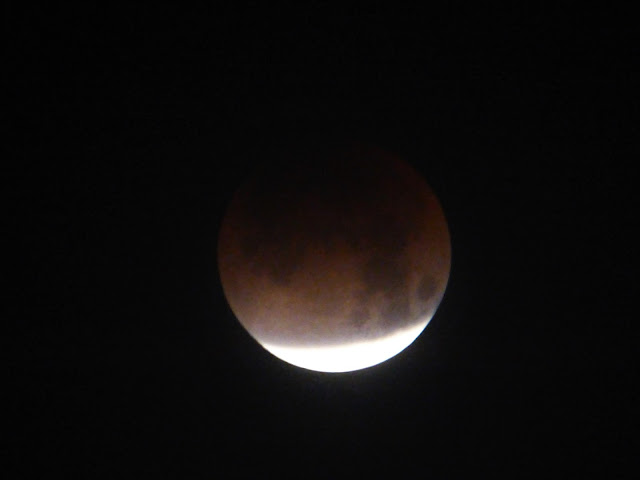 Then there is the "supermoon". This is sort of arbitrary, being not an astronomical term, but more a modern astrological term. It refers to the full moon happening when the moon is closest to earth, therefore producing a slightly larger disk (14% greater than a "micromoon") with the additional light (30% more) that reflects from the Moon's surface. Astronomers would prefer to call this the perigee syzygy. 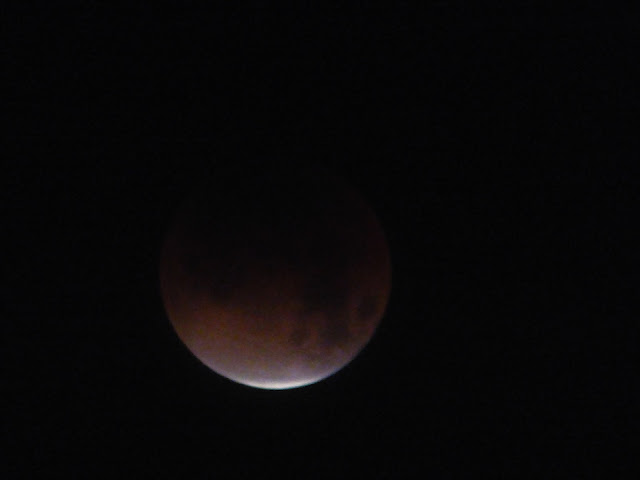 It is the lunar eclipse that is the best part of the evening's festivities. The Moon is passing through the Earth's shadow, causing it to darken considerably and seem to glow red as a result of light refracting through the Earth's atmosphere (the "Blood Moon"). I haven't seen an article that mentions this, but I imagine if we were on the Moon right now there would be a red ring around the edges of the Earth's sphere. 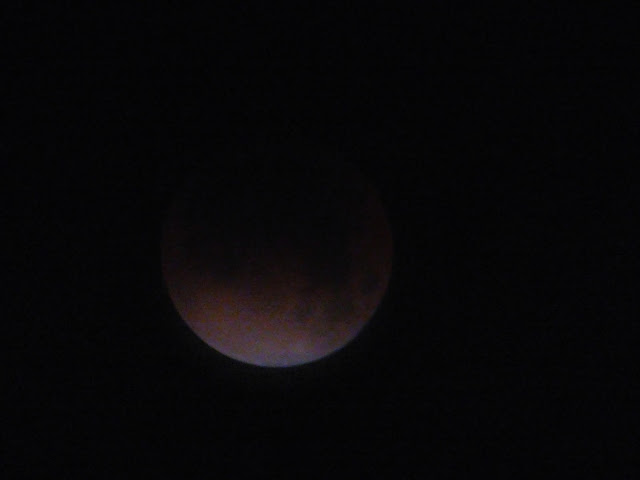 There hasn't been a combination of a "supermoon", a Blue Moon, and a lunar eclipse since 1866, so I guess it is special that way, but I find any lunar eclipse to be special. There is speculation that the slightly closer approach of the Moon has an influence on the occurrence of great earthquakes and the like, but the difference in the gravitational attraction is negligible, and statistical analysis doesn't bear this out.  I guess we'll see what happens around the world today, but remember that dozens of earthquakes happen every single day, so a magnitude 5 or 6 quake somewhere is not that remarkable. 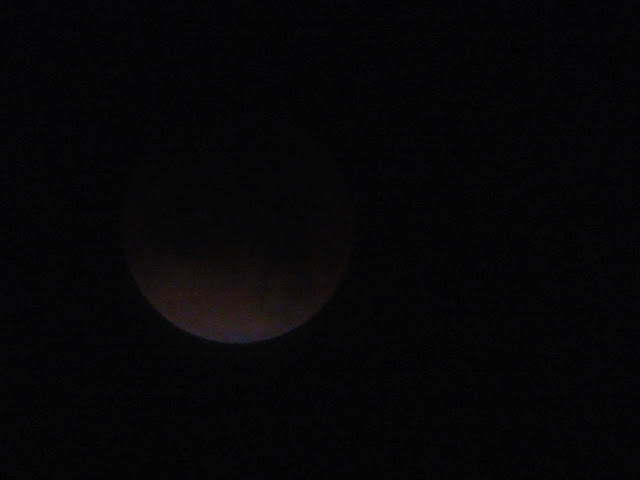 In any case, I lucked out with the fog and was able to capture the beginning of the lunar eclipse, but there won't be any shots of its end because the fog has thickened. Thus I am up at 5:00 AM blogging, which is most certainly not my usual habit! I guess there is a certain symmetry that I just finished with a month long reminiscence of ten years of geoblogging with an article on the solar eclipse of last August, and I start the eleventh year of blogging with a lunar eclipse. In any case, enjoy, and if you are up and skies are clear, go take a look! 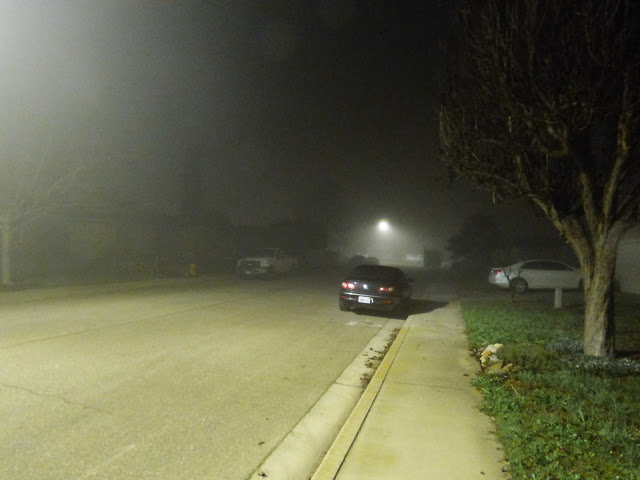 I commend you for your 5 am post! Serendipity brought me to the central coast just in time for a fog-free view of the super duper event, and it was indeed tremendous!

Thanks so much for your 10 years of dedicated blogging. Looking forward to another decade!!

Hi Garry, than you for getting up so early for those of us that didn't. Impressive to think that the last time this occurred was the year after Lincoln was assassinated...

Your comment about potentially affecting earthquakes reminds me of an article I ready this morning, that I think might interest you quite a bit, regarding the pupfish...