The California That Once Was: The San Luis National Wildlife Refuge

I live in an extraordinary place, a place that does not always receive the respect that it deserves. In much the same way that travelers refer to the Midwest as "fly-over states", my home is the "drive-through valley".  The Great Valley (called by some the Central Valley) is a 400 mile long and 50 mile wide province that must be traversed by Southern Californians who want to reach the Pacific Northwest, or coastal Californians who want to reach Yosemite National Park or the Sierra Nevada ski resorts.

Many people find the journey an arduous exercise in white-line fever, an endless flat region covered by millions of acres of orchards and fields of crops, or cattle stockyards, or used car lots on the edges of poor-looking towns. I'm willing to grant that it is often not a pretty sight. There is a reason that our cities often wind up last on the lists of "best places to live". Our skies are often the most polluted in the United States.

In the thirty years that I've lived here, I've come to discover a different Great Valley. It's the five percent of the valley that still retains the character of the land that existed before it was co-opted by agricultural development. It's a recurrent theme of my blogging adventures because each of these adventures expands my world just a little bit. 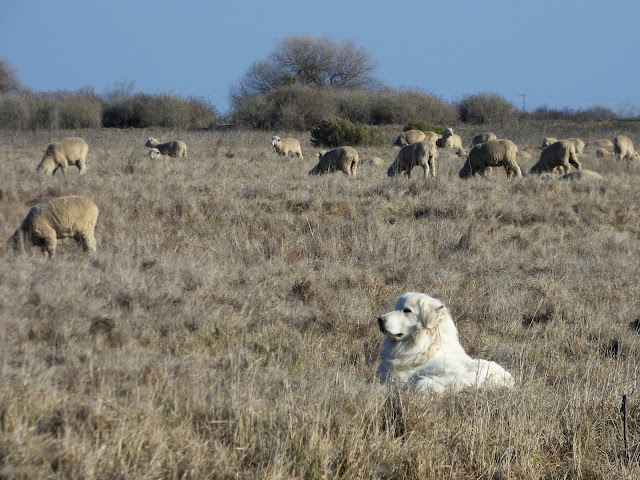 Today's journey was the auto-tour through the San Luis National Wildlife Refuge. The refuges range the length of the valley, providing winter sanctuary for migrating birds, but also providing a last stand for many native species of the valley from the smallest of bugs to the rodents and larger grazing animals to the largest remaining predators, the eagles, the hawks, the coyotes and foxes, and sometimes even mountain lions. The gigantic herds of Tule Elk and Bison have been gone for more than a century, although the elk are protected as a species in some of the refuges, including 60 of them at San Luis. Without the millions of grazing animals, the refuge managers allow limited grazing of the prairie by sheep and cattle to maintain the integrity of the grasslands. I imagined the scene above as a wolf patrolling the margins of a giant herd grazing elk, looking for a weak or sick individual to take down. The reality was the opposite, of course. The dog was watching over the sheep. 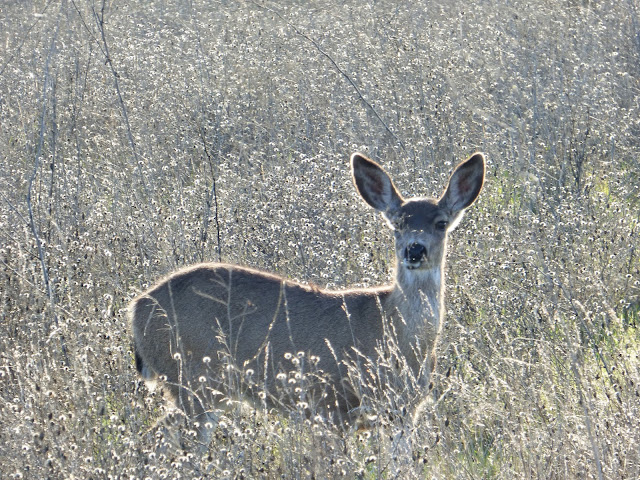 I don't see them often, but Mule Deer do inhabit the grasslands. We saw nearly a dozen of them today. I've mostly given up on trying to take decent pictures, but I really liked this one.

The stars of the refuge are the myriads of bird species that call them home. Some of them only stay for a few days or a few months as part of a long migration, while others stay year-round. Each refuge includes a wide range of habitats, including freshwater marshes, riparian areas (river channels), prairie grasslands, and alkali salt flats. The auto-tours at the refuge sample most of these environments, and several hiking trails are available as well. 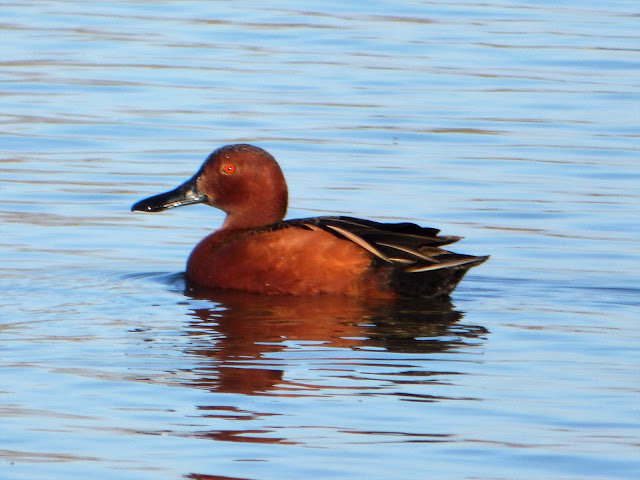 In the first five miles of the tour we didn't see a great many migrant species, so I thought the Cinnamon Teal (above) and the Great Blue Heron (opening photo) that greeted us at the entrance to the refuge were going to be the avian stars of the day. But then we made the turn towards the Souza Marsh at the southeastern edge of the refuge. And everything changed in a moment. We had found the migrants. 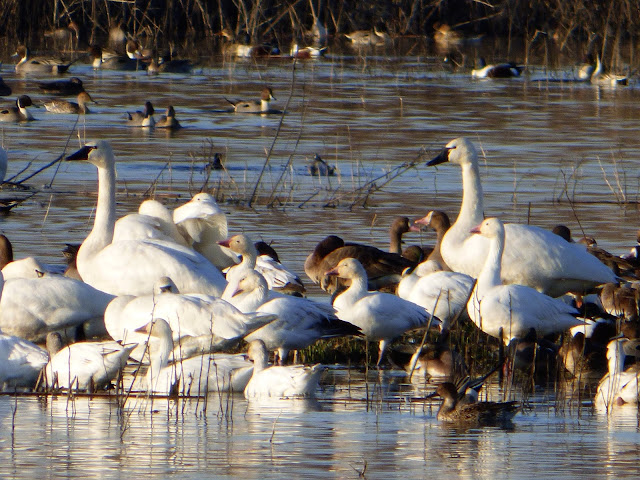 There were hundreds of Snow Geese, Greater White-fronted Geese, Northern Shovelers, Cinnamon Teals, Northern Pintails, Mallards, American Coots, Pied-billed Grebes, and to our great delight, several dozen Tundra Swans (I count five of the species in this picture alone). The swans aren't rare, but Mrs. Geotripper and I have only found them once before on our travels. They dwarf the other birds in the marsh. 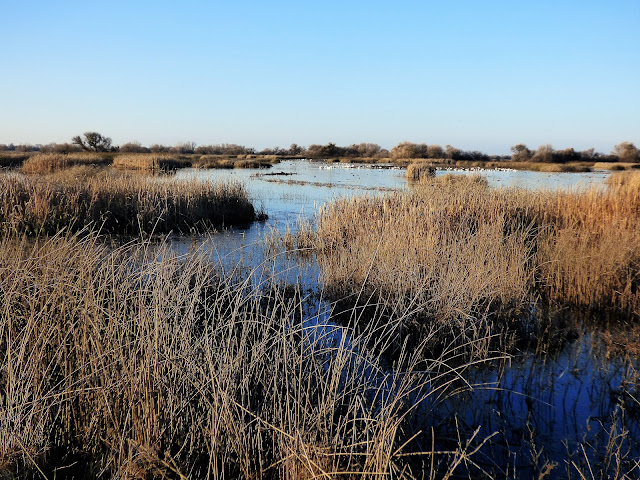 Last year was a good year for rain, and water was plentiful after five years of drought. Most of the marshlands were flooded, providing better than normal habitat for the birds. Unfortunately, the new year is proving much drier, with a near record low snowpack in the mountains upstream, and dry conditions in the long-range forecasts. Uncertainty lies ahead. 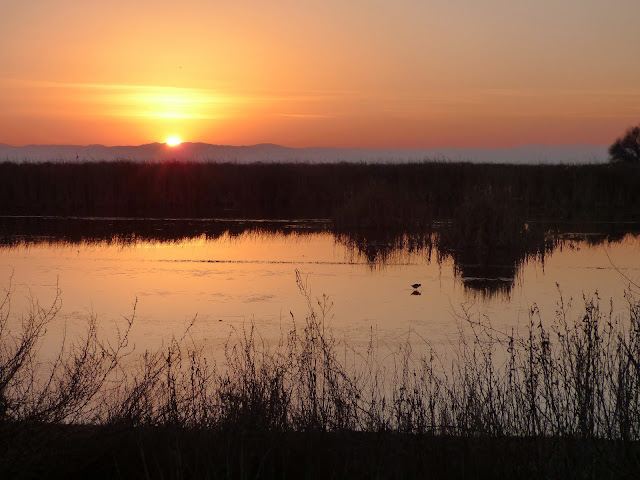 The prairies and river environments have always existed in a cycle of drought and flood. The biggest variable in the present day and in the future is the effect of global warming on the environment here. The predictions are for more drought, although some climate models suggest more rain in some years. Unfortunately that means less snow, and more variable river flows, heavier in the spring, and far less in the summer and fall. It's hard to predict the coming changes in the ecosystem that will follow. That ecosystem of course includes the species Homo sapiens, who despite their arrogance about "ruling over nature" and all that, are just as vulnerable to climate change as the rest of the species who live here. Their one advantage is the ability to recognize the situation they are in, to provide reasonably accurate predictions about the future, and the ability to affect the outcome. 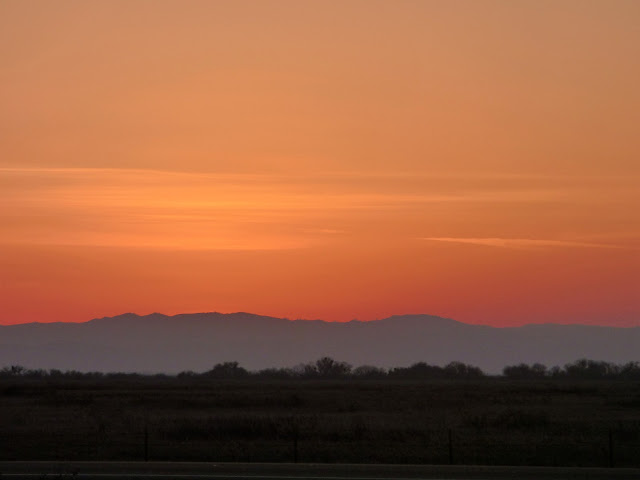