Former Seas and Oceans: Searching for the Past in the Great Valley 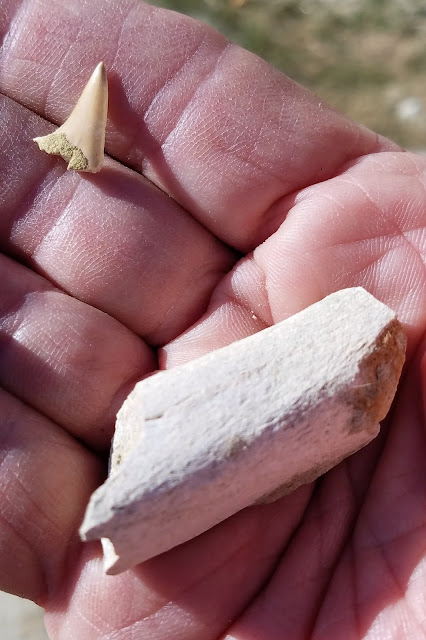 The world changes. It changes minute by minute as events happen in human society, the disasters, the eruptions (such as Sinabung this last weekend), the wildfires, the earthquakes. Other changes are more incremental, such as the rise of mountain ranges and their removal by the relentless forces of erosion. Given enough time, huge changes take place, but no one in the midst of these processes would ever notice a difference over the course of their lives.

Teaching geology and the earth sciences is often a challenge, especially when we talk about the history of planet Earth. The rocks on the slopes before us may look barren and innocuous, but huge events reveal themselves when we start observing them carefully. As a professor at a community college, my students are usually neophytes in the geological sciences. They are seeing the earth from a new never-before considered viewpoint.

I was on the road this last holiday weekend, introducing my students to the geology of Death Valley National Park. Some are currently in geology classes, some already had taken my courses, and some were entirely new to the science. Death Valley is a long drive from our campus, so we left on Thursday night to cover the 200 miles of the flat Great Valley, and to get a head start towards the desert. We camped at Kern River County Park outside of the town of Bakersfield, and at the foot of the southern Sierra Nevada. 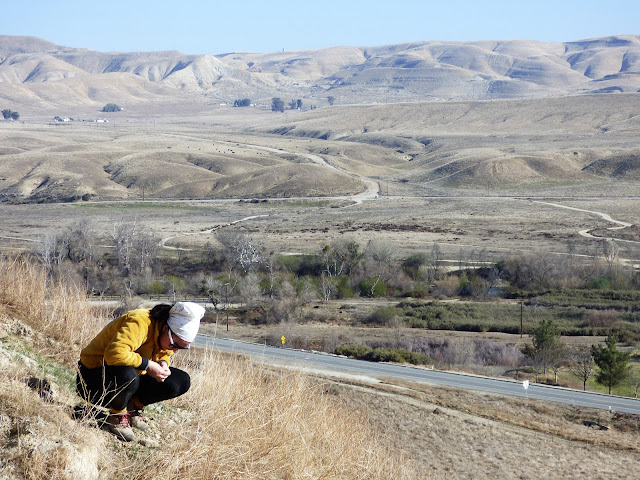 After a cold night, we awoke to a panorama of barren grass covered hills with no rocks in sight. A layer of soil covers them all, except where roadcuts expose a small part. We talked in camp before leaving about how geologists see landscapes. Where a politician might see only city and county boundaries, geologists see provinces, regions with a unique geological history that contrasts with the areas around them. The Great Valley of California, for instance, is a vast 400 mile long trough that has been collecting eroded sediments from the Sierra Nevada and Coast Ranges. It's been going on for at least 140 million years, and the sediments have accumulated to depths as great as 50,000 feet. More recently, perhaps during only the last one or two million years, the land was uplifted and gently tilted, causing the sediments to start eroding again.

We further talked about how geologists organize the rocks they see into formations, members, and groups. We recognize that in specific environments (ocean bottom, river floodplain, delta, sand dune) specific kinds of rocks will accumulate, and we can recognize by a change in the rock that the environment changed at some time in the past. In other words, as one looks at a cliff, different layers with different rocks and different colors show how the depositional environment changed, such as a river flood plain being inundated by rising sea level, or becoming drier and changing to a desert with dunes and the like. These unique layers are called formations. Formations are distinguished by being mappable and by having precise definable contacts with other layers above and below. Thinner distinctive layers within a formation may be defined as members, while several closely related formations (such as desert dry lake salt layers and desert sand dune deposits formed adjacent to each other at about the same time) may be classed as a group.

At our locality along the Kern River, a shallow seaway once existed. Maybe that's not such a stretch, since a rise of sea level of only 300 feet would inundate the area again. The presence of the sea is indicated by silt and sandstone layers, and the presence of numerous fossils. 15-16 million years ago, in the Miocene epoch, this was an ocean teeming with life. The shoreline must have been relatively close by because the fossil assemblage includes an occasional bone of a horse or camel, indicating a carcass that floated out to sea after a flooded river overtook the animal. The animals preserved as fossils are whales, dolphins, seals, walrus relatives, manatee relatives, and more than two dozen species of shark. Sharks have rarely-preserved cartilage skeletons, but their teeth are species distinctive. The size of the teeth range from barely visible to monstrous daggers almost a foot long (from the gigantic Great White relative Megalodon). 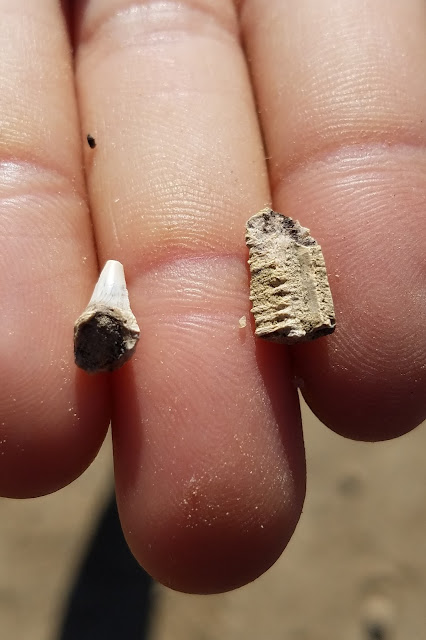 The rock layer is called the Round Mountain Silt, a formation within the Temblor Group. The incredible accumulation of fossils at the locality has been something of a mystery; suggestions include a volcanic ash disaster (no evidence of volcanism nearby, though), red tide poisoning (perhaps, but no clear evidence), or a feeding ground of large sharks (but large sharks were among the dead as well). A more recent suggestion is that the bones and teeth accumulated over a long period of time (perhaps 700,000 years) at the bottom of a sediment-starved basin (a deep trough a little farther offshore; such basins exist today in Southern California around the Channel Islands). Whatever the reason, the idea of finding fossils for the first time in their lives held great appeal for the students!

They shot off up the hill and although finds weren't abundant, almost everyone found a fragment of bone or a small tooth. The strange rectangular tooth in the picture above was that of a manta-type ray.

It's clear that some people spend a great deal of time digging and collecting at the site (the hillside has a prominent ledge where the digging takes place. Two years ago, one of the "serious" diggers was there, and showed us one of his really excellent finds, seen below. 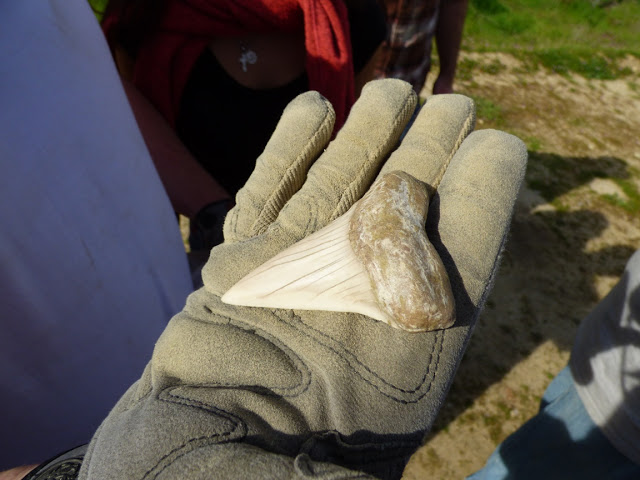 The largest tooth ever found by any of my students was probably this one from 2011 (below). The variety in shape and size is apparent from the selection seen in the photo.

One warning about hunting for fossils in the region. The south end of the Great Valley is prime habitat for the fungal spores that cause Valley Fever. It's a nasty disease that is caused when the spores (which are in the dusty soils) get into your lungs and reproduce. If you ever give it a shot, take precautions...it's not a disease to be trifled with. 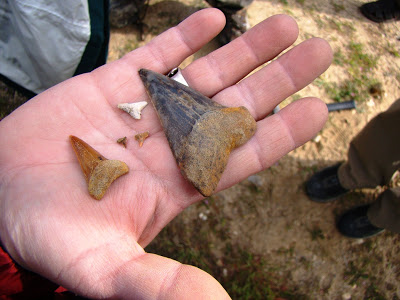 We got in the vans and started over the hill (Tehachapi Pass) on our way to the Mojave Desert, and then onwards to Death Valley, where our explorations would really begin.
Posted by Garry Hayes at 7:01 PM

What precautions should be taken to avoid valley fever?

I suggest for my students that they wear medical facemasks, or the kind painters wear. I would avoid hunting when the sand is dry and dusty (luckily we visit in February when the ground is more damp). I would especially do these things if you intend to do some heavy digging and sieving over a number of hours or days as some people do. Our collecting is limited to 45 minutes or so, so our students only look for surface fossils and don't do much digging.