Historical Geology Laboratory in 1930, with a Few Personal Twists 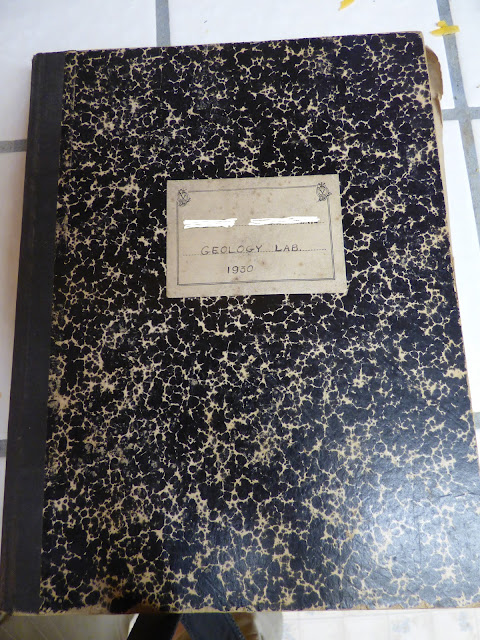 I admit it. I miss a lot. I've noticed that a lot of colleges and universities are very proud of their history and traditions, but in my experience at three community colleges, the memory of a department is rather short. When I started at Modesto Junior College, I was told stories of my predecessor, who was a legendary character, and not in a good way. Although he served for many years, his retirement was welcomed by many. It took a number of years before I found that some rather significant people taught in the position I occupy now, including Richard Hilton, who wrote Dinosaurs and Other Mesozoic Reptiles of California. Another was Charles Love, the son of Wyoming geologist David Love, whose career was central part of John McPhee's excellent book Rising From the Plains. But those individuals only reach back into the 1970s. I've got no idea who was here in the first fifty years of the existence of our institution.

Likewise, I know very little about the first college I attended, Chaffey College in southern California. It's true that I was just a gawky teenager who had no sense of institutional history when I was there between 1975 and 1977. I got to know my two professors, but they were relatively young at the time, and I had no sense at all of who taught there in earlier years. 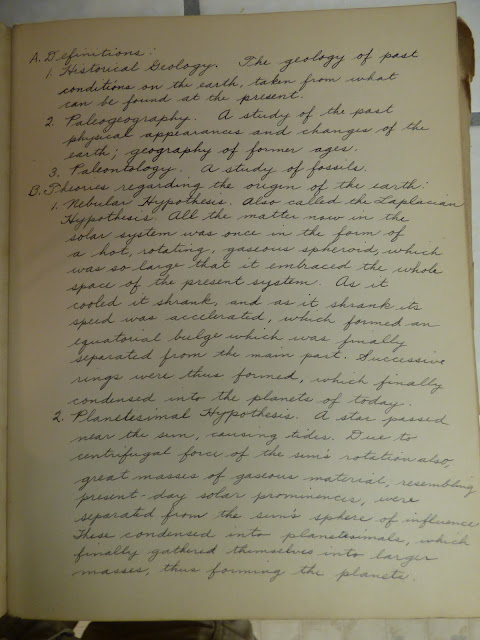 So I had a series of interesting revelations tonight. I had known that my step-grandfather had taken a geology class way back in 1930, and it turned out that he held on to some of his notes (present-day students of mine: do YOU do that??). They were passed on to me, and I set them aside and they were "lost" for a time when we had to pack up the entire house for a re-carpeting job (yes, this is obviously a convoluted story). In any case I ran across the notebook again and finally decided to sit down and have a closer look. 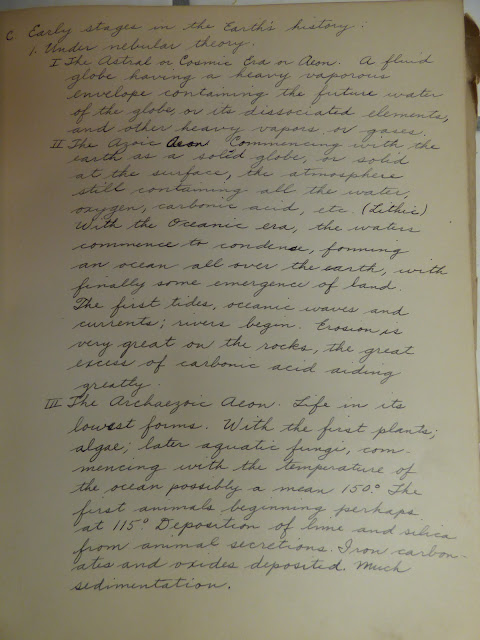 The first surprise had nothing to do with the geology. I'm sure I was told this but it just didn't register: my grandfather went to the same community college I did! At the time it was called Chaffey Junior College (today it is simply Chaffey College). That "junior" conferred a sort of inferiority upon the students who needed to attend a cheaper local alternative to expensive universities and private institutions. But if there is anything that I've found to be true, it is that we community colleges produce a great many talented graduates who have competed very well when they've transferred to four-year institutions. Still, over the years, California's community colleges have dropped the "junior" from their name...all but two: Santa Rosa Junior College, and my very own Modesto Junior College. We decided a long time ago that we liked our name. Our students provide us all the reputation for excellence that we need. 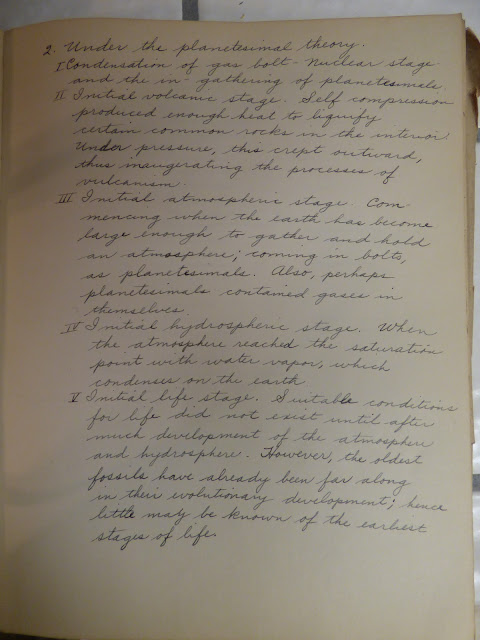 As I opened the lab book (which hasn't changed form in nearly 90 years), a slip of paper fell out. It was his report card. What was great interest to me was that the geology instructor had signed his name, R.D. Dysart. I had found the name of a geology instructor from those early years of Chaffey's history. So I got curious and started searching on the internet for any information about the man (and how unfortunate it is that I immediately and correctly assumed that it was a man?). And with that came the second big surprise. 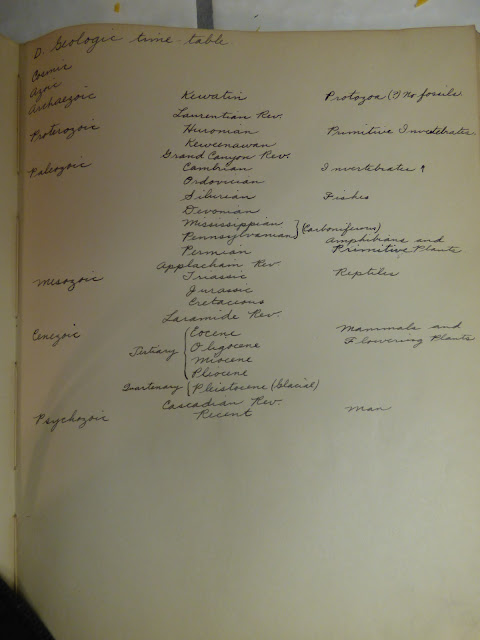 I got my bachelor degree in geology from Pomona College, an achievement for which I am very proud (I'm not saying I excelled; I made it through the program...barely). Pomona has one of the finest geology programs in the state, and I readily recommend it to my transferring students. The department has a rich history that extends back into the early 1920s, when it was (I believe) only the second such program to be established in the state. For the first thirty years, the department was headed by A.O. Woodford, a legendary geologist in California circles. He continued as an emeritus professor for decades, and I actually was privileged to attend a field trip that he conducted when he was in his early nineties. He lived to be over 100 years old. 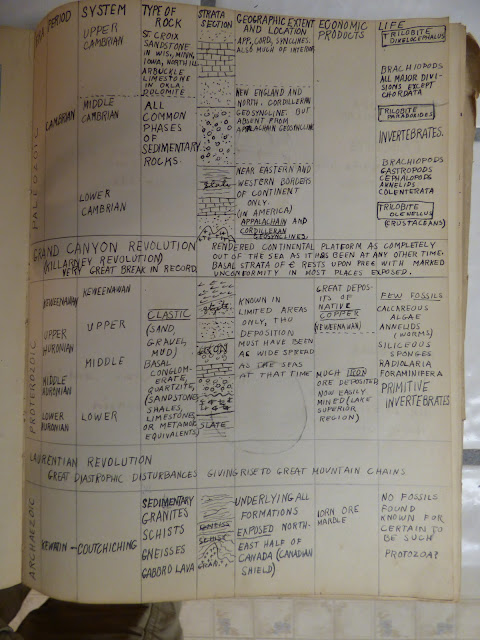 The name Russell D. Dysart popped up in my search...he was one of the earliest graduates of the geology department at Pomona College, in 1925, only three years after the program began! He apparently taught at Chaffey Junior College for many years, where (it is noted on the Pomona website) that he was famous for the red tie that he wore on all his field trips. 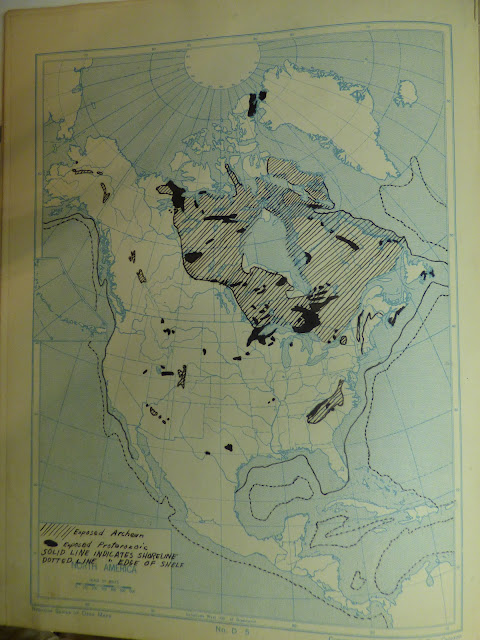 So there you go. My grandfather was a student of one of the first graduates of my alma mater, who taught at the community college that I attended. You never know the connections that will happen in life. 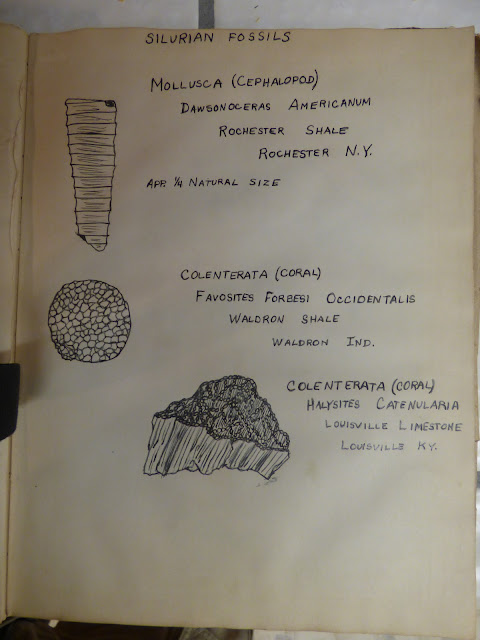 It's a lot of fun to thumb through the history of geology as seen by the student. One can find old textbooks in used book stores (and I have some that date back to the late 1800s), but it is a little different to see how that knowledge filters down to a student who may or may not ever think about geology again (for the record, my grandfather retained a lot of his geologic knowledge and enjoyed picking my brain for years). 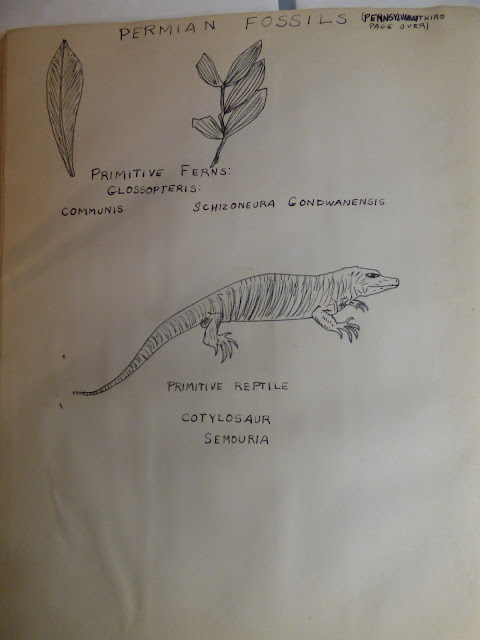 There isn't a lot of personal perspective in these notes, and I wouldn't expect all that much, but I was struck by my grandfather's penmanship. It's a good thing my students have computers these days to write with, just sayin'.

Some things are very different as one scrolls through hypotheses about the origin and history of the Earth, but other things remain the same. We may have an incredible theory, plate tectonics, through which we can understand much of the history of the planet, a theory that had not been accepted, nor even conceived in the 1930s (look up what happened to Alfred Wegener for instance). And yet the rocks and fossils are the same. We've discovered many more species, but the drawings my grandfather made look very much like those that my own students will be drawing in just a few weeks. Complex over-arching theories are great, but they have to explain the rocks and fossils or they will come crashing down. Students will always need to know the basic information in order to understand the theories that account for them. 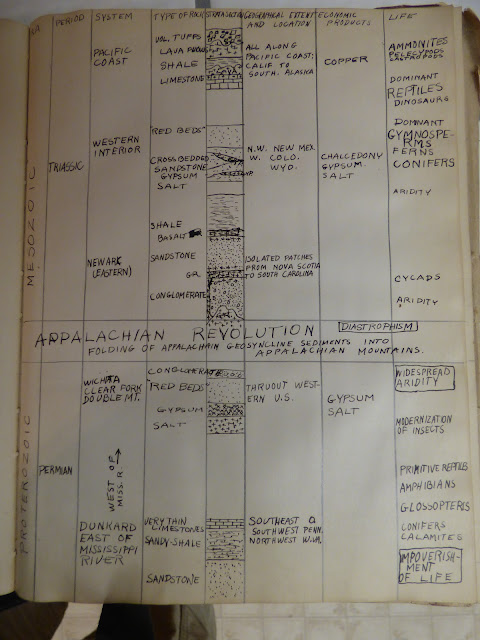 I learned something else about professor Russell D. Dysart, something that isn't true of me...he was a man of few words when it came to assigning grades... 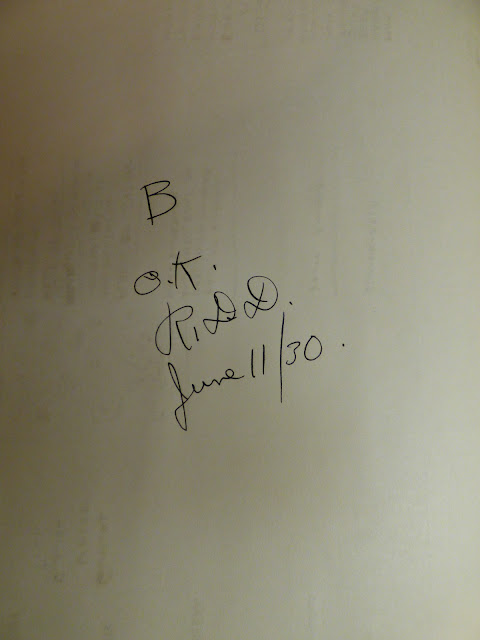 I loved this post and it contents. Not only did I enjoy your writing Professor Hayes, but I had to go through each page of that lab book...how exciting. I still have the items you had surrendered while moving from your old classroom on East campus to the new building.

Neat post :) I agree re California's JC system. I took some classes at Hancock JC (Santa Maria) before going to Stanford, and started in field botany ("career" change) at Santa Barbara City College. Great experiences in both cases.

I'll throw my experience into the ring. I was an older student ~27 years old so I wasn't looking for daycare at a JC but I found excellent instructors and transferred to a CSU and good career after. Junior colleges can be a great resource at a bargain if the student has committed.

My daughter went into a SoCal JC geology program as merely something of interest (not what she thought she would major in) and ended up loving it because of the incredible and frequent field trips led by a really good group of hands-on professors. She was transformed into an enthusiastic major, transferred to a great UC program, graduated with a BS in 4 years, and has now started a PhD program in volcanology, with a great advisor at a good geology school in the west. As a JC geo grad myself (and career geologist), it was phenomenal to see her flower on her own without much help from dad. I credit the school program, but the California JC program as a whole for helping to make it possible.