A Look at Ten Years of Geotripping: That Slope Won't be a Problem, Will it? The Wrightwood Mudflow

I'm continuing my search through the archives of ten years of geoblogging, and posting some of my favorites. I've been at Modesto Junior College for nearly thirty years, but I grew up in Southern California and I've had precious few opportunities to go back to those mountains of my youth, the San Gabriels, the San Bernardinos, and the Transverse Ranges above Santa Barbara.

I ran across a post from 2013 that echoes to a small extent the tragedy that is unfolding this week in Montecito and Santa Barbara. The mountains of Southern California are among the youngest and fastest growing ranges in the world, and there are consequences to the rapid uplift. These mountains are among the steepest in the world. They are also semi-arid, covered by vast expanses of chaparral and open forests subject to periodic wildfires. The combination is sometimes deadly when heavy rains impact on fire-denuded slopes and tragedy ensues. The origins of the recurring mudflows at Wrightwood are slightly different but the dangers are very similar.

You learn something new everyday. At least I hope you do. I learned something astounding revealed by satellite imagery of the Mojave Desert.

We were headed home a week or two ago, and were taking a "short cut" along the San Andreas fault in Lone Pine Canyon and through the town of Wrightwood. That's right, "through" the town. The village is built on top of the San Andreas! But that's not what I learned. I've known of the close proximity of the fault and the town for years.

It had something to do with the town's other famous natural hazard: the Wrightwood mudflow. There is a slope south of the town heading at an elevation of more than 8,000 feet composed of deeply weathered and crushed Pelona Schist. As can be seen in the picture below, the slope is so steep that trees and shrubs can't gain a roothold, and failures are constant, especially during the spring snowmelt and during heavy rainstorms. 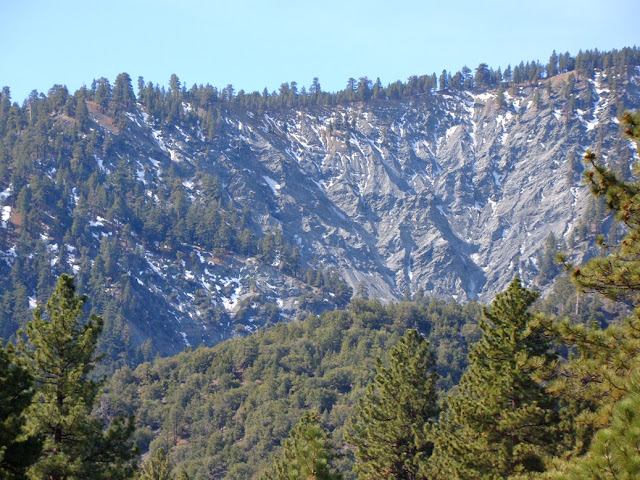 The Pelona schist formed in the accretionary wedge of the subduction zone that lay off the California coast during the Mesozoic Era, and as such may be similar to the Franciscan Complex farther to the north. It is an attractive muscovite mica quartz albite schist in hand samples, but it doesn't do well on steep slopes. 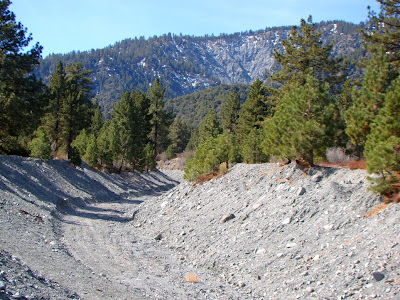 We passed several channels that were clearly designed to send the flows through town without causing further damage. 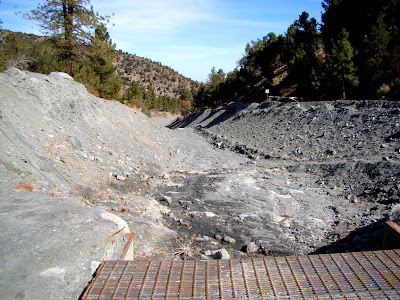 In May of 1941, just over a million cubic yards of mud and boulders flowed down Heath Canyon and into the town of Wrightwood, damaging and burying a number of structures. No deaths or injuries were reported. The immediate cause was the rapid melting and runoff of the heavy snowpack during a period of unseasonably warm temperatures. Surges of mud continued for a week. Other damaging mudflows occurred in 1969 and 2004.

This basic information was something I was made aware of during my first geology class at Chaffey College many years ago. One thing I didn't know is that the mud passed beyond Wrightwood and continued for 15 miles into the adjacent Mojave Desert. The flow traveled a vertical mile, from 8,000 feet to 3,000 feet.
The other thing I didn't know is that Wrightwood mudflow has been active for at least five centuries, and that the results of the slide are clearly visible from space! Check out the Google earth image below and note the dark gray alluvial fan just right of center. The gray colored fan is composed of the Pelona schist, which is much darker than the sediments in adjacent fans which contain more granitic rock.

The town of Wrightwood is easy to visit. It is just off of Highway 138 west of Cajon Pass on the Angeles Crest Highway. As noted previously, the town sits on the San Andreas fault, so the locality is a good spot to visit and reflect on the many hazards that must be dealt with when one decides to take up residence in the state. For more information on the mudflow, check out this state report: http://www.wrightwoodcalif.com/mudflows/79MortonMudRpt.pdf

The Other California is my on again-off again blog series on the geologically interesting places in our fair state that don't show up on the tourist guides.
Posted by Garry Hayes at 9:31 PM

Garry, another insightful post. I've looked at Google satellite maps of socal for years and instantly recognize that dark alluvial pattern. I feel like a fool that I never followed it up to the eroded hillside. Once again you've shown me something I've seen for years in a new light. Thank you.