A Look Back at Ten Years of Geotripping: Popeye, the Ichnology Man...Dinosaur tracks on the Colorado Plateau

And then sometimes there's just the off-the-cuff stuff, the momentary inspirations that either work or they don't. This post from 2012 is what happened when I ruined my photograph by having my shadow in the way, and then saw a recognizable shape in the shot later.

The paleontological dig through the archives of Geotripper continues on our tenth anniversary... Most people know of Popeye the Sailor Man, through comics, cartoons, and even a movie. He was one of the most popular imaginary characters of the 1930s, and his exploits vis-à-vis Olive Oyl, Bluto and Wimpy are well-known. What is not so well known are his adventures later in life.

I was on my journey last week through the Colorado Plateau country, and we stopped at the Moenave Dinosaur Track Site. We stepped out into the bright sun amidst a flurry of dust and wind, and set out to find some Dilophosaurus tracks (with the help of our friendly Navajo guide). I could see another tourist off in the distance, and there was something familiar about him, but I just couldn't quite place him. This often happens with my former students; if I haven't seen them in a long time, and run across them in a grocery store or theatre, I won't remember their names at all. If they aren't in the classroom or lab, they are out of context. I considered this a moment, and realized in a flash that if this tourist had been on the deck of a ship, I would have recognized him immediately! The chin, the nose, the squint, it was all there. He'd gained some weight, but I could tell it was Popeye, the Sailor Man.

We shook hands. "I love your work", I said, "You inspired me to always eat my spinach when I was growing up". His sunburned face reddened just a bit more, and he mumbled "Thank ya for the complyment". I couldn't help but ask, "The nearest coastline is a thousand miles away. Why aren't you out at sea?" He was quiet for a moment, looking reflective, and said "Walk wid me".

"I had a pretty good life on the sea...the pay was good in them Great Depression years, and I helped folks laugh a little during the hardest of times" he said, "Things was simpler then, more black and white, so to speak. You could tell who the good guys was, and the bad guys, and if ya's kept enough spinach on hand, you could triumph over all manner of evils." We wandered past the massive rib cage of a T-Rex (at least our guide said that's what it was). "But as time went on, things began to feel, well, sort of futile. I believed in true love, and my love was Olive Oyl. What a woman! The sound of her voice, the smell of her freshly washed hair, the way she could light up a room with her smile." His smile faded a bit. "But I never seemed quite good enough for her. I would save her from death and disaster a hundred time over, and she always said she loved me, but then Bluto would show up, say a few words, and then she was gone again".

"I'd head out to sea again, but over the years it never seemed to satisfy my longings the way it used to. Every so often I would feel, um, stirrings in my heart that maybe there was something out there, beyond the horizon, something that could bridge that void in my heart and mind". I must have given him a strange look because he glanced back and said "The sea is a wonderful place, mind you, but it's almost the same everywhere...always a flat horizon. Sure, there are the storms and the reflection of the clouds on the surface, but ultimately that's all there was...the surface. You knew deep things were going on down below, but it was so rare that you could see it or feel it all. There was water, there was air, and when the nets came up, there were fish. What kind of an existence is that?" I nodded. What could I say?

He continued, "You know how the physics of 'toons work donchya? Someone hits you hard enough, you can fly right over the horizon, to some far place. That's what happened one day, when Bluto slammed me but good. I ended up in Arizona somewheres, out in the middle of the desert. I'd never seen no place like this, ever. Color everywhere, rocky cliffs, lizards and snakes and all. Normally I'da popped out that can of spinach and jumped right back inta the fight, but som'thin held me back. I had ta know more about this strange landscape, so I stayed on a bit. Oh, I eventually went back and beat the crap outta Bluto like usual, but it just wasn't the same anymore. Within a few weeks, I was in counseling with Bluto and Olive, and I told them I was over with the strange relationship. They could have each other, and I wished them happiness. I forgave Wimpy his hamburger debts (which I gotta admit were considerable), kissed Swee'Pea, and headed out for the Plateau country."

"The desert is wunnerful", he said with growing intensity, "it's got variety, it's got depth, it's got history. And best of all, there's the fossils. Not all hidden, like a treasure in Davy Jone's Locker, they could be just right there for all to see. And what I like the most is, is the dinosaur tracks. A fish swims by in the ocean, and there's nuthin to record its passing. But here, 200 million years ago, some kind of dee-lofo-saur-us took a stroll, and left behind a trail. And so did a bunch of his buddies. I did me some research and found that folks that studies trackways and burrows is called ichnologists, and I realized that was what I was lookin' for all my life. I wanna be Popeye, the Ichnology Man!"

We had walked past the Tyrannosaurus track, the crocodile skeleton, the triceratops skeleton, velociraptor teeth, the dinosaur coprolites, the dinosaur eggs (at least, that what our guide told us those things were), and I knew it was time to move on. I shook hands with the hero of my youth, and walked back to my car with a new perception of life's funny twists and turns. Popeye seemed happy after his fashion...he still mumbled and cursed under his breath, but with a lightness of being I had never noticed before. He was content. And I felt a little better about the world. 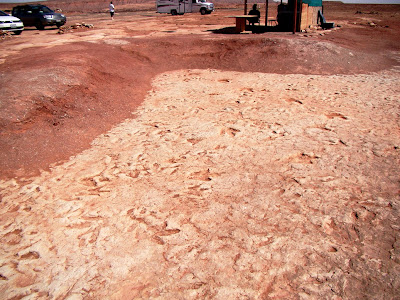 My apologies to the creators of Popeye and to everyone else who has read this far! Sometimes you see an odd-looking picture, and a story just jumps into the imagination. The real tracksite is located on Highway 160 in Arizona, a bit over 5 miles east of the junction with Highway 89. There is a dirt road to the villages at Moenave, and the tracksite is just a few hundred yards off the highway. The dilophosaurus tracks are real, as is a small bit of claw embedded in the rock. There really were three dilophosaurus skeletons excavated close by in the 1940's. The guides will show you a lot of other things that are not quite so genuine. I suspect it would be bad form to point this out, in the same way that one wouldn't start spoiling a magic show by pointing out the tricks the magician is using. It's a tourist attraction, and they are making their living the same as the rest of us. An excellent review of the site can be found in chapter 8 of Geology Underfoot in Northern Arizona by Abbott and Cook.
Posted by Garry Hayes at 4:26 PM

As always I enjoyed your humor