A Look Back at Ten Years of Geotripping: The Story Told by a Single Rock

I'm commemorating a decade of blogging by dredging the archives for some of my favorite posts. 2010 was a turbulent year. We were still in the depths of the Great Recession (at least in our area), my summer trip was cancelled for the only time in the last 29 years, we broke ground on our new Community Science Center (affordable only because of the recession and the drop in construction bids), and I posted 298 blog entries, my most productive year on Geotripper. A great many posts continued the Other California series, and a really strange political controversy over the California state rock serpentine accounted for many more(more on this in the next post). It was hard to choose, but my favorite post of the year was the story of a single rock... 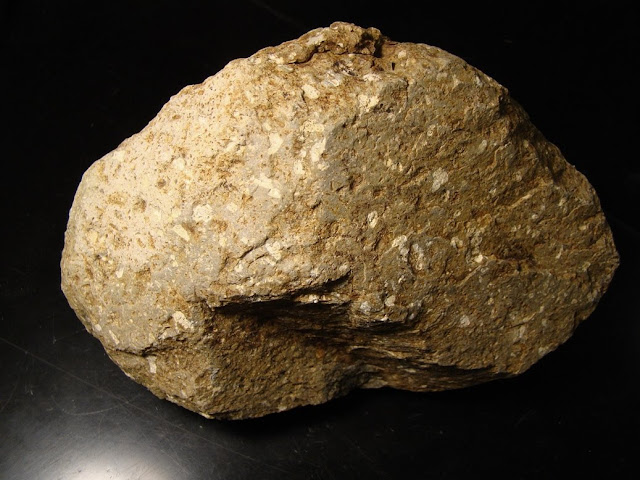 Meet my new deskcrop! I was out on the last field trip of the year, a journey through the Diablo Range to the San Andreas fault and Pinnacles National Monument. We had a wonderful day, which we didn't exactly deserve or expect. It poured all night, and somehow the rain stopped at daybreak. We had a few showers during the day, but a big storm was brewing in northern California (four feet of snow expected in Lake Tahoe, for instance). Happily, the deluge didn't start until we arrived back in town, and it has been pouring ever since.

In between we were treated to a beautiful display of clouds and rainbows, and we had a full day learning about California's most famous fault, and a few others as well. I picked up one rock, though, which captured my imagination, and reminded me of why I fell in love with the science of geology so long ago. It's a porphyritic andesite that I picked up on the shoreline of San Luis Reservoir near Pacheco Pass in the Diablo Range. The mountains form the western boundary of the Great Valley of California for a distance of about 125 miles.

It's not a remarkable rock in and of itself. Andesite is one of the most common of volcanic rocks, found pretty much all over the Pacific Rim in places like the Cascades, the Japanese islands, Indonesia, and by incredible coincidence, the Andes! The story of this rock could be very straightforward; it could be as simple as: it erupted...the rock weathered a bit...and I picked it up.

But that isn't the whole story. Context is so important; I picked the rock up from a layer, seen below, that was exposed on the eastern flank of the Coast Ranges. It is a sedimentary conglomerate. Again the story could be fairly simple; conglomerate is a fairly common rock too. We could hypothesize that the rock journeyed a bit further from the volcano, down a river and the river flowed from the mountains onto an alluvial fan. Along the way, it was rounded off by bouncing against other rocks...then I picked it up. 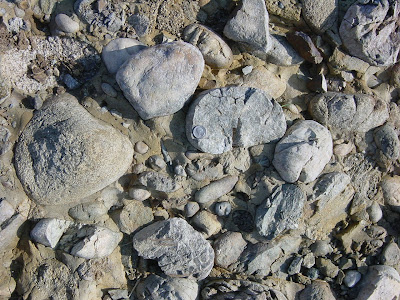 It turns out that story doesn't quite work as a hypothesis either. This conglomerate has some odd features that tell us that it didn't form in a river. It is topped by a gray sandstone that is in turn covered by siltstone and shale. Above it is another layer of conglomerate that is covered by sandstone, siltstone and shale. This pattern is repeated over and over, until we have a sedimentary formation more than 20,000 feet thick (four miles)! The layers contain marine fossils; some are shells of snails and clams, but sometimes the rocks include shark teeth and the remains of giant marine reptiles like ichthyosaurs, plesiosaurs, and mosasaurs.

OK, but what in the world could be moving boulders and cobbles around on the sea floor? Isn't that one of those places where the water is calm all the time? Sometimes that is the case, but not here. These rocks accumulated in large river deltas extending into a shallow sea that lay off the coast of California in late Cretaceous time, the final period of the dinosaurs. Because of constant large earthquakes, the edges of the river deltas were unstable and were often shaken loose. The mass of rocks turned into turbulent chaotic masses flowing along the sea floor at 30 or 40 miles per hour. These violent events are called turbidity currents. The turbidity currents can carry rocks for many miles. As the flow slows down, the larger particles settle first, followed by the finer particles, and so on. The sedimentary beds become graded by grain size (graded beds).

But why earthquakes? And where did the lavas and magma come from? It turns out these things are related too. This story seems to grow more complicated by the moment! In Cretaceous time, there was no San Andreas fault, and there was a lot less of California, at least a California that could be seen from above sea level. A vast subduction zone lay offshore, a place where the Pacific Ocean crust was being pushed under the North American Continent. As the ocean crust was pushed deeper and deeper into the underlying mantle, it heated up, and assisted by the presence of water, melted into magmas that rose upwards through the crust. Some of the magma exploded and flowed out the surface forming andesitic volcanoes, but other magma chambers cooled slowly three or four miles down in the crust, forming crystalline igneous rocks like diorite, granodiorite, and granite. Those are the characteristic rocks of the Sierra Nevada batholith, exposed in places like Yosemite Valley, Tuolumne Meadows, and Sequoia/Kings Canyon National Park.

I've often stood on the edge of Yosemite Valley and looked at the vast exposures of granitic rock, and imagined the volcanoes that once stood above, miles higher. I even wrote an extensive web series about being under the volcano. In my mind I could stand on the flanks of the Mesozoic volcanoes, watching out for predatory dinosaurs and gazing at pterodactyls flying overhead. It took a lot of imagination, but today the feeling was a little more tangible. I was holding a piece of the volcano in my hand.

I love where my geologic journeys lead; there are lots of pretty spectacular places to see in our present world, but so many more incredible landscapes of the past. It was a good day in the Coast Ranges! 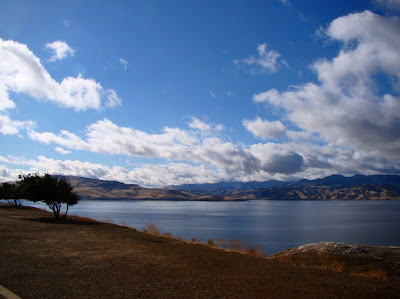