There's Always Something New to be Learned: Beavers on the Tuolumne River 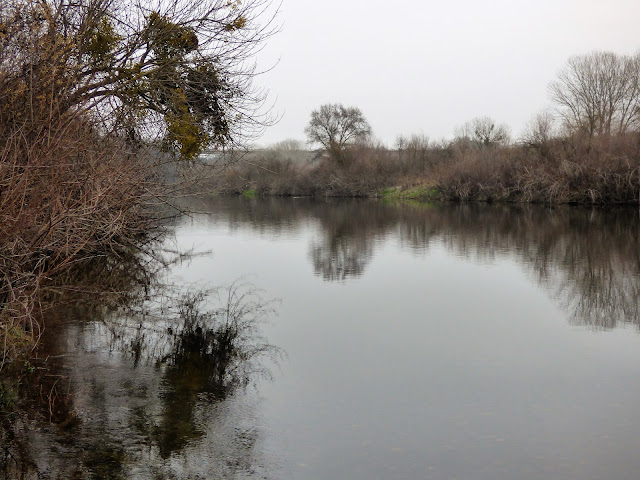 I will freely cop to the fact that I am not a particularly observant person. This is quite an admission for a guy who has been blogging for ten years about geology, the science that requires skills of observation almost like no other. Still, there it is. I lived in Stanislaus County for thirty years thinking that we have maybe twenty species of birds. In the last three years of finally paying attention to such things, I've learned that we have three hundred species, including those which utilize some of the most famous wintering grounds for migratory birds in the American West (if you want to learn more about this, check out my other blog Geotripper's California Birds) 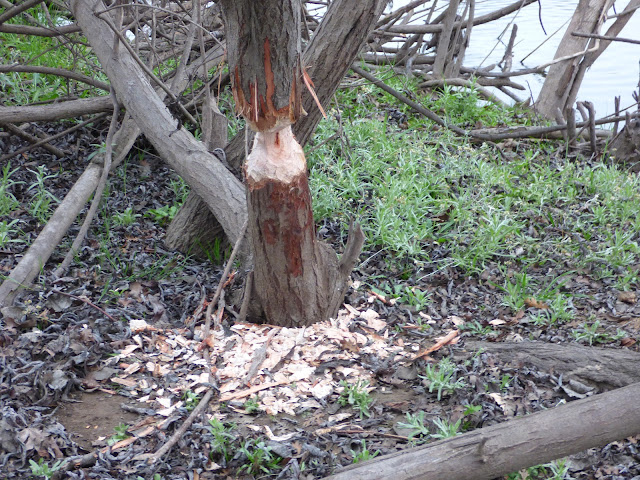 It is along similar lines that we come to my new educational experience of the day. I've been hiking the Tuolumne River Parkway Trail since before it was completed two years ago. I've documented more than sixty bird species on my near-daily hikes as well as the presence of Red Fox, Gray Fox, River Otter, Raccoon, and a troop of feral domestic cats. And yet somehow, in all of these mini-adventures, I missed some terribly obvious evidence of one other mammal along the river. Until today, when it was made as clear as the nose in front of my face...we have beavers. 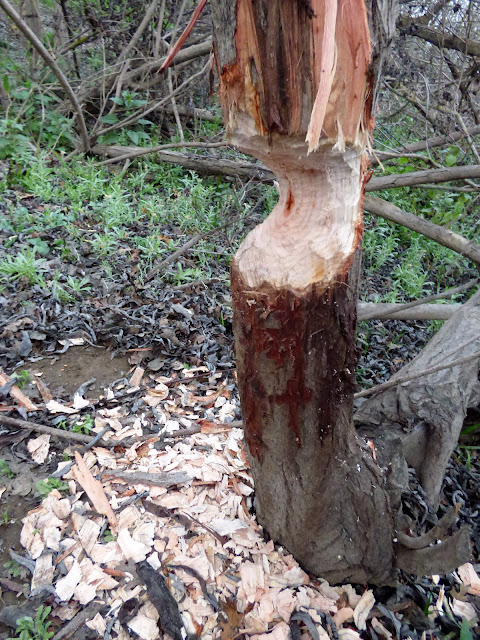 I've always been aware of fallen trees along the river, but I never thought about why. But today, the cuttings were so fresh and obvious that I had to stop and look, and I did in fact see rippling in the water nearby. I may have actually interrupted the beaver at work (although they generally work at night). I started looking around and noticed that there were plenty of other small trees that had been felled by beaver incisors.

I had to hit the books (er, Google) to find out more. It turns out that the story of beavers in California is both muddled, and complicated. For one thing, California has its own beaver subspecies, including the California Golden Beaver, Castor Canadensis subauratus. Whether the distinction is biologically valid awaits confirmation from DNA studies. There isn't a lot known about their historical distribution because as most students of history know, the beaver was eradicated over much of its range by fur trappers in the early 1800s. It was assumed by some that they never inhabited the High Sierra, although some research has indicated that they did. They may have originally ranged across the entire state except for the deserts, and even there they survive today along the Mojave and Colorado Rivers. In any case, it is thought that by the 1940s there were as few as 1,300 of them left, almost all in the Great Valley. At that time, the Department of Fish and Game decided to transplant some of the beavers into some of their former range. At this point I had another surprise: some of the transplants were taken from the Tuolumne River...in Waterford, the very spot where I was seeing beaver sign for the first time! 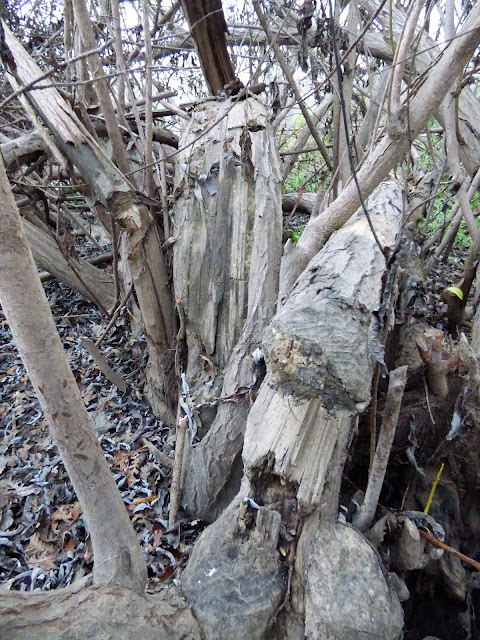 Beavers can be pests, especially in places like the delta of the Sacramento/San Joaquin Rivers, where they can cause severe damage to artificial levees. On the other hand, beavers can be highly beneficial in natural (or re-established) riparian habitats. Their dams help to slow down river erosion and allow more water to percolate into the ground. They tend to cause an expansion of the riparian woodlands by widening the area where the groundwater table is close to the surface. 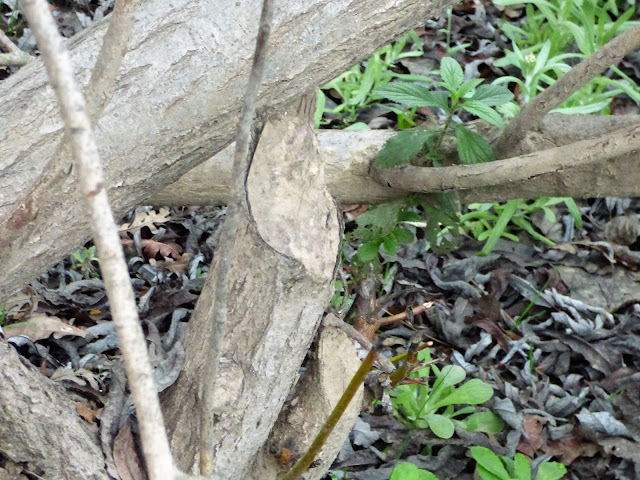 The other small surprise of the day was the discovery that I was not the first to notice the presence of beavers (far, far from it of course). But one of the first hits on Google was that of another frequent user of the Tuolumne Parkway Trail, a naturalist, and erstwhile geology field studies student Siera Nystrom, who has taken several of my courses. Check out some of her excellent writing at Natural History Journal. Whatever I see and get excited about, she probably has seen it first! Being observant is a powerful skill to have.
Posted by Garry Hayes at 10:18 PM

"Water: A Natural History" by Alice Outwater (1996) has a great section on the collective impact beavers had on the landscape in North America. Here's a part of a book review I found online summarizing the section on beavers:

"Her writing brings us back to a vivid understanding of what our country was like before it was settled by Europeans, and specifically how close the relationship between animal behavior and the very shape of ecological systems is. Take the beaver, for example. We all know that these 40-inch long creatures have an impact on waterways, and it would not surprise most people to know that a family of beavers can build a 35-foot long dam in a week. But have you thought of the collective impact of a population of 200 million beavers, the approximate number which lived here in the 1500’s? Through their dam building behavior, beavers essentially “construct” wetlands, which expand the area of transition zone between water and land and provide fertile habitat and groundwater recharge. Each beaver impacted something like an acre of land in this way, which, multiplied by the number of beavers, amounts to an area of more than 300,000 square miles of wetlands… a tenth of the entire land area of the United States. The beaver population was decimated, down to today’s’ population of some 7 million, by the year 1700. And for what? Hats. The beaver hat was so fashionable across Europe that beaver skins bankrolled most of the early colonists, and they were the principal export from the port of New York until the trade ended abruptly when the animals could no longer be found easily."

Apparently native Americans were recruited to help hunt beavers after their life style collapsed following disease, etc., and they were very good at it, along with the Frontier beaver trappers (Jedediah Smith, Kit Carson, etc.). One beaver pelt was really valuable and one native American was quoted as saying, "the English do not think right; they give us 20 knives like this one for one beaver skin." (http://digital.library.mcgill.ca/nwc/history/01.htm).

Outwater also states that beavers lived in every part of the U.S. except where there were alligators present (makes sense, right?!). It's really interesting to me to think about the North American hydrologic landscape in the context of 200 million beavers living on just about every river system, creating and maintaining so much wetland area...

I'm going to have to check out the trail and see if I can see some beavers!