Looking Back at Ten Years of Geotripping: "They're, uh...They're Not a Very Exciting People, Those Geologists"

I borrowed the quote in the title from a Cracked.com article (referenced below) as a starting point to some musings about the adventures in life that are possible for people who don't happen to be astronauts or Himalayan mountain-climbers. If there is any theme that has run through my ten years as a geoblogger, it is about the adventures that geologists and geo-fans get to have as a result of having that bit of extra geo-knowledge about the regions and landscapes they see and live in. I've been digging up the archives, and this was one of my favorite posts in 2011...

What does "adventure" mean to you? 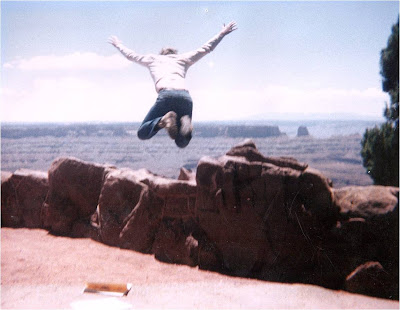 This is an adrenaline rush...
I suppose that an adventure is just about anything that breaks up the routine and exposes you to something new. For a lot of people I am guessing that adventure has a lot to do with an adrenaline rush: I think of motorcycling, rock-climbing, bungee-jumping or rides at an amusement park.

Others may think of adventure as exploration to the outer edges of space, beyond the reach of civilization, of the deep sea, the kinds of adventures that we might read about in National Geographic or history books. But how many people actually participate in that kind of adventure?

Other adventures come out of mythology; the quest, the dangerous journey with an uncertain outcome. We don't see so many of those, but I wonder if a mythological narrative will arise from recent events concerning Osama Bin Laden and those who sought to capture or kill him.

We live most of our adventures through the lives of someone else, in books and movies and so on. The vast majority of us just don't have the resources, or time, or health to be out on the cutting edge of human experience. It's for that reason that I want to talk about learning about geology as an adventure, in all of the best ways and something that almost anyone can do in some way. I think I started musing on this topic because of a cute item from Cracked.com. They do some hilarious stuff, but the last line of this post was, eh, whatever...

"They're, uh ... they're not a very exciting people, those geologists."

I grant you that I am not a very exciting person, in person. But I wouldn't trade my life as a geologist and teacher with anyone. What makes geology such an adventure? I can think of many examples, and here are a few:

Geologic hazards like volcanic eruptions and earthquakes have been fodder for movies and novels for decades. Geologists actually get to study these things as a part of their career. What a thrill to work on the flanks of an active volcano, monitoring and predicting future activity. There is certainly an adrenaline rush when standing next to flowing lava! A nice bonus? They sometimes save lives with their research. The story of the 1991 eruption of Pinatubo in the Phillippines is a nice example. The eruption was the second largest event of the 20th century, and killed some 800 people. On the other hand, tens of thousands of lives were saved because of a timely warning to evacuate the region. This is all the more remarkable considering that during the height of the eruption, a typhoon swept into the island (it was actually the cause of the majority of fatalities). Even bad screenwriters and novelists don't even think to throw typhoons on top of volcanic eruptions! 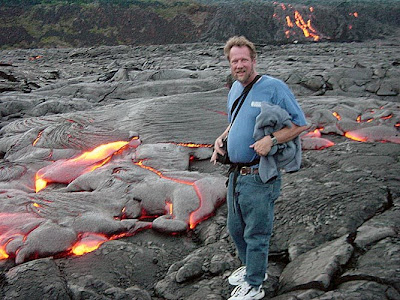 Have you ever wanted to be on an adventure to find buried treasure? Geologists and rockhounders alike know the thrill of uncovering a rare crystal. It's hard to be in the field all the time without finding the occasional opportunity to search for quartz, garnet, topaz, or any other number of beautiful expressions of atomic-level symmetry. It's the rare geologist who doesn't have a small treasure trove of gemstones (or here) on a mantle or bookcase shelf.

What about that childhood dream of finding a dinosaur? There is nothing quite like uncovering the bones of a creature that lived more than 65 million years ago. If you spend enough time in the right regions of the world, and you have enough geological background to know the age and nature of the rocks you are exploring, you can know that thrill (I'm not talking about a college education; there are geo-guides for the layperson that are full of accessible info about every region of the countryside). It's happened to my students (and myself) a fair number of times over the years. And there's no feeling quite like it. I was whooping like a kid (and promptly called the Utah Geological Survey; there's a right way to do these things). 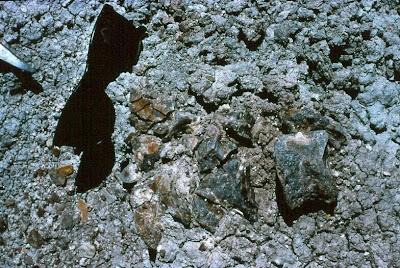 Did you ever imagine owning a time machine, of traveling back in time? An understanding of the basic principles of geology is the tool geologists use to time-travel. It's effective; a bit of knowledge, and you can lay your hand on the surface that reveals incredible moments in the history of the world. In the picture below, I have my hand on the moment that the dinosaurs went extinct (via one of the most likely hypotheses). It is the iridium layer at Gubbio, Italy, where the Alvarez father and son team discovered evidence of a massive asteroid impact. 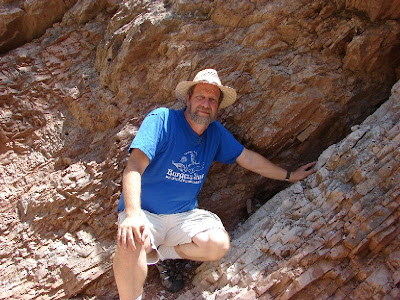 In the other photo, we are looking at the moment that the Long Valley Caldera erupted at the north end of the Owens Valley in the Eastern Sierra around 790,000 years ago. More than 125 cubic miles of hot rhyolite ash filled the atmosphere and blanketed the region many feet deep, killing all living things. Do you need a movie to imagine cataclysmic events? It's a whole new experience to lay your hands on the moment that such events actually happened. 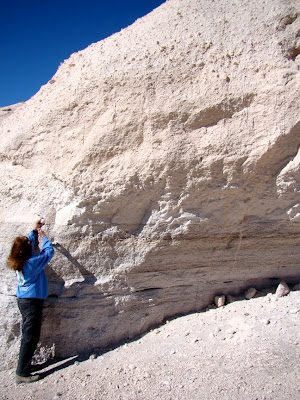 A basic understanding of geology enriches one's life. National Parks are nice places to see scenery. A place like Yellowstone is interesting because you see bison and geysers. It is fascinating when you come to understand the nature of the "supervolcano" caldera eruption that produced the rocks and the active magma chamber that causes the geothermal activity. A visit to Yosemite is always nice, but it takes on a whole new dimension when you realize you are walking about inside an ancient volcanic complex not unlike Yellowstone's. You are exploring the underside of a volcano!

During your travels this summer, stop by the visitor center and pick up a "Geology of..." book and read it. It can enrich your experience, and turn a vacation into a real adventure! Or, if you are in the Modesto region, consider taking a summer field study class in geology or archaeology at MJC (more on this soon!).
Posted by Garry Hayes at 11:57 AM