The Karst Topography...of California? California has Natural Bridges, and not Just in Santa Cruz 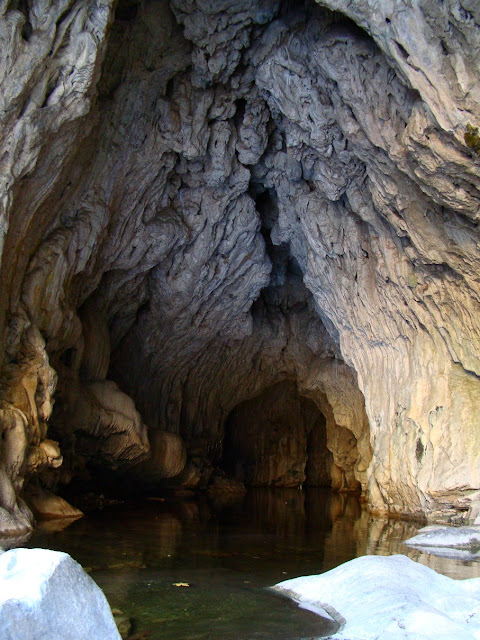 I've been reviewing some of the stops on our recent field studies course through the karst country of California. This landscape is the portion of the Sierra Nevada Mother Lode that is underlain by the marble of the Calaveras Complex. The marble originally formed as limestone on the floor of the Pacific Ocean, and was mashed into the western edge of North America as the ocean floor was thrust beneath the continent along a subduction zone several hundred million years ago.

The marble was eventually uplifted and exposed at the earth's surface by erosion. The term "karst" refers to the tendency of such landscapes to develop sinkholes as underground caves collapse. Rivers have a tendency to disappear in such places. In today's post, we look at a creek that disappears, and reappears. Twice. 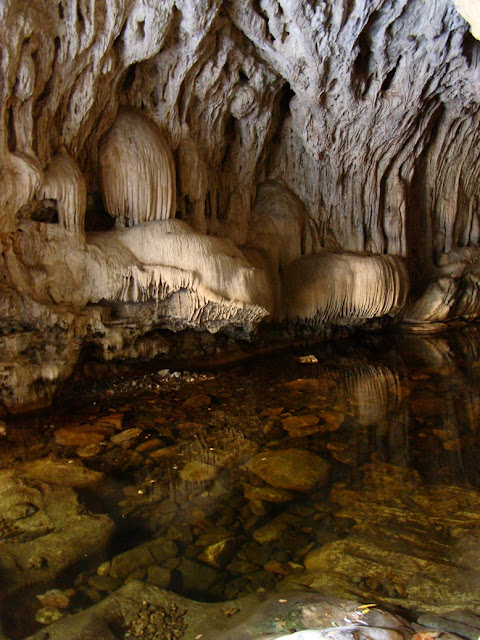 There is a place called "Natural Bridges" that is familiar to many Californians. It along the coast at Santa Cruz, and is actually a sea arch eroded by wave action. Less familiar are the Natural Bridges that span Coyote Creek between Columbia State Historical Park and Vallecitos on Parrot's Ferry Road in the Mother Lode. 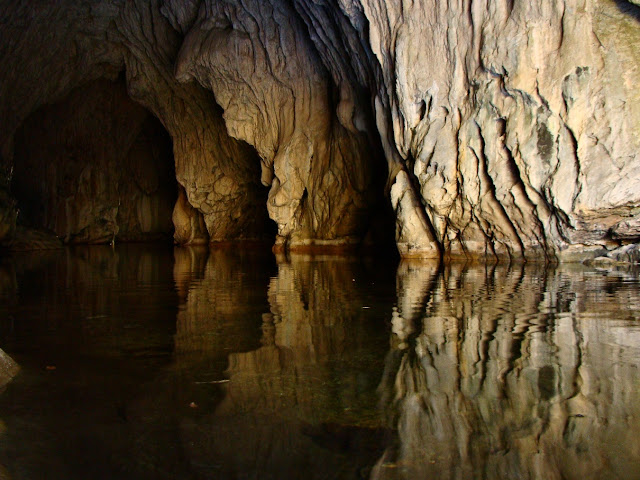 In geologic terms, a natural bridge is usually taken to be an arch that has formed as a result of stream erosion. The epitome of such arches are found in Utah at Natural Bridges National Monument in the state of Utah. The bridge at Santa Cruz is more properly termed a "sea arch". Karst processes can also produce bridges, as an erosional remnant left behind as caves collapse, leaving openings through which water is flowing. 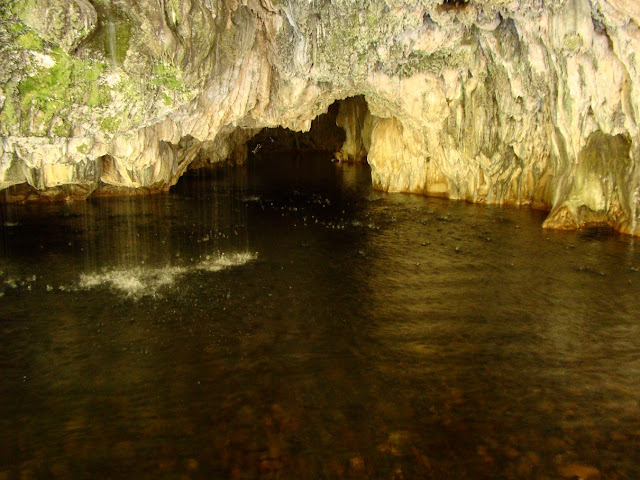 The Natural Bridges of the Mother Lode are certainly karst related, but in a slightly different manner. At Coyote Creek, springs of carbonate-laden water emerged from the hillside above the river, and calcium carbonate, the mineral that makes up limestone and marble, was precipitated into large masses called flowstone (a great deal like Mammoth Springs at Yellowstone National Park). They blocked the creek, but eventually water worked through the base of the spring deposits. Eventually the creek carved a course under limestone dam. The cavern has since been decorated with all manner of speleothems, stalactites, stalagmites, columns, curtains, and others. As can be seen in the pictures above and below, the springs are still active. There is a constant music of dripping water at the entrance to the upper bridge. 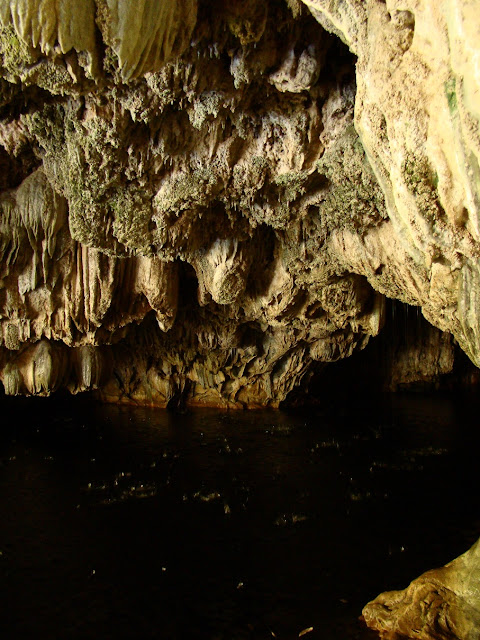 You can get a sense of the falling water in the shaky low resolution video below.

There are two bridges on Coyote Creek. Most hikers visit the upper cave, which is at the end of a relatively gentle one mile trail. It takes a bit of scrambling to get to the upper entrance to the cave, but it's apparently a fun float or swim through the several hundred foot long cave. I haven't had the privilege, as I've visted most often during the late fall season when the water has been cold. 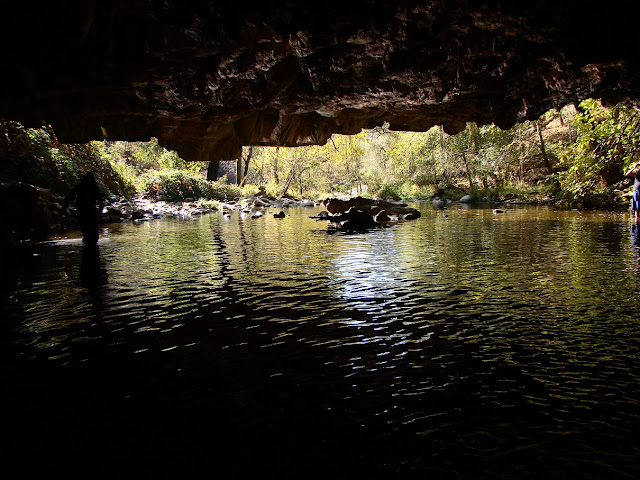 It is possible to walk well into the entrances without getting too wet. 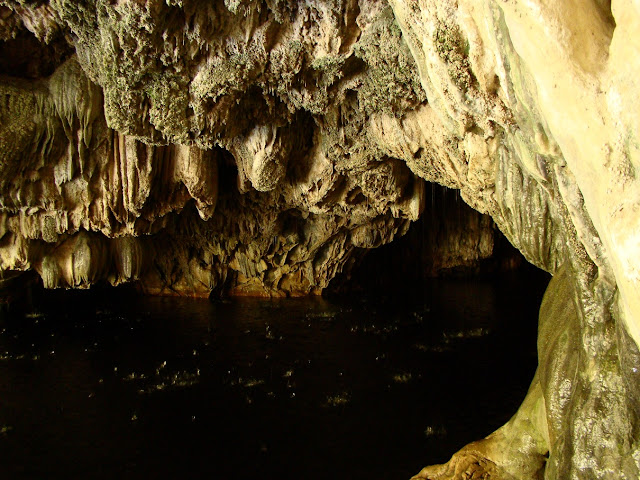 The bridges have suffered quite a bit of damage over the years. Tourists have been visiting the site for more than century. A hotel even was constructed on top of the upper bridge for a time. Many of the cave decorations have been broken off. Luckily, floods flush out the cave every so often, and it is high enough that some decorations are out of reach of vandals. 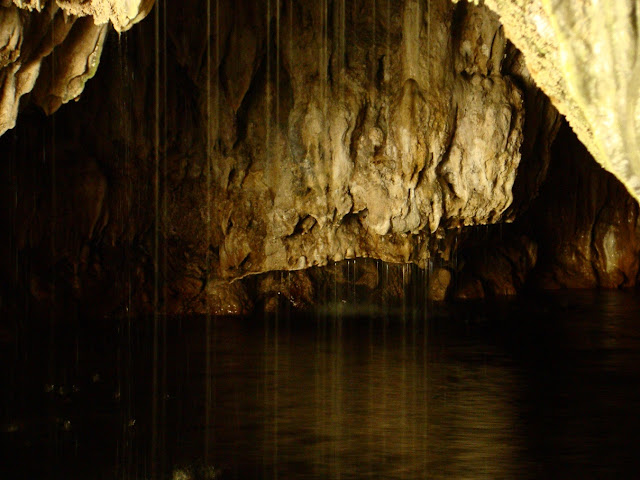 The lower cave lies several hundred yards downstream. Far fewer people know about it, and it is a bit of a challenge to get there. One can follow the creek for the most part, but the way is blocked by brush here and there, so trails of use climb the canyon walls in a few illogical-seeming spots. It's worth the effort, if just to get away from the occasional crowds at the upstream caves. 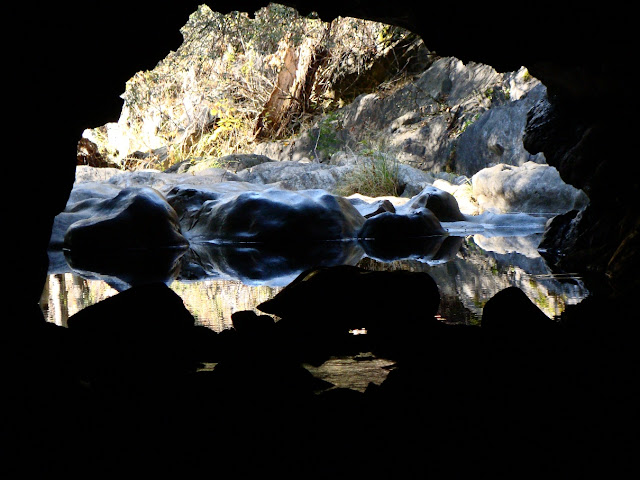 It's a bit shorter and the downstream exit is visible from the upper entrance (which makes some a challenge of some picture angles). 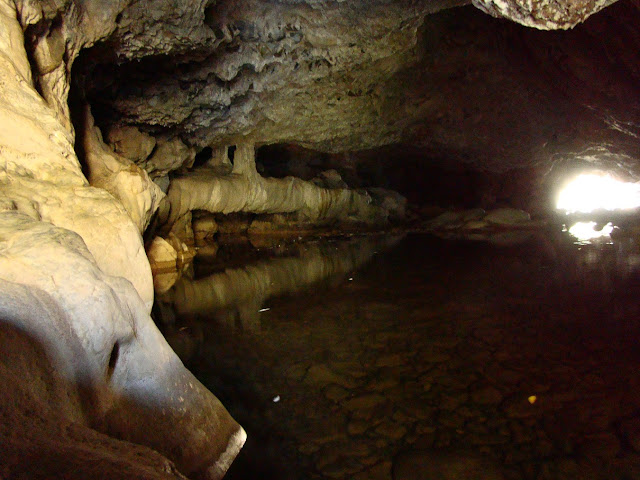 The bridges are on public lands administered by the Bureau of Reclamation (New Melones Reservoir lies just downstream), so the caves are nominally protected by ranger patrols, though I've never seen one. Mostly those of us who enjoy the caves need to be vigilant for vandals. Check this link for directions and maps to the caves: http://www.usbr.gov/mp/ccao/newmelones/planning_visit.html. 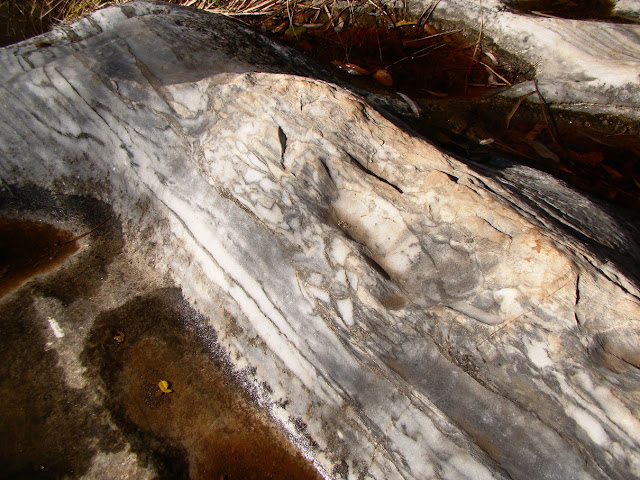 One of the nice things about the walk to the lower cave is the smooth exposures of marble along the creek between the two. It is white marble streaked with gray, and has been polished by numerous floods. The Calaveras marble originated as coral reefs or carbonate muds in tropical environments in the tropical latitudes of the Pacific Ocean. Strangely enough, the marble was featured on the front page of our local newspaper this week. It's about a marble quarry just a few miles away from the bridges. Check it out: http://www.modbee.com/news/article43637292.html.

These rocks have been on an incredible journey.
Posted by Garry Hayes at 10:28 PM