The Karst Topography...of California? Getting Filthy Rich from Karst in Columbia

As I noted in the last post, California has some unique landscapes that are unfamiliar to most visitors, specifically karst topography. Karst results when a region is underlain by limestone or marble. The formation of caves is sometimes revealed at the surface when the roof of a cavern collapses, forming sinkholes and related features. At Chaw'se in the last post, we saw how karst topography was utilized by the Miwok people. Today we look at how another culture used karst, and in the process nearly brought about the end of the Miwok and other native peoples in California. It was all about gold.

The western part of the Sierra Nevada is composed not of granite, but of metamorphic rock like slate, marble and metavolcanic greenstone. The metamorphic rocks contained widely disseminated bits of gold, but hydrothermal activity related to the intrusion of granite in Mesozoic time concentrated the gold into veins of quartz and other minerals. The veins came to be known as the Mother Lode, and they were the source of riches and misery. In most cases the miners were after gold-bearing river gravels along rivers that flowed through the Mother Lode, or they developed mines that cut directly into the quartz veins. When the easy gold was gone from the rivers, they expanded their search into unexpected areas. One of those places was the ancient riverbeds of another era, long before the present day Sierra Nevada existed. 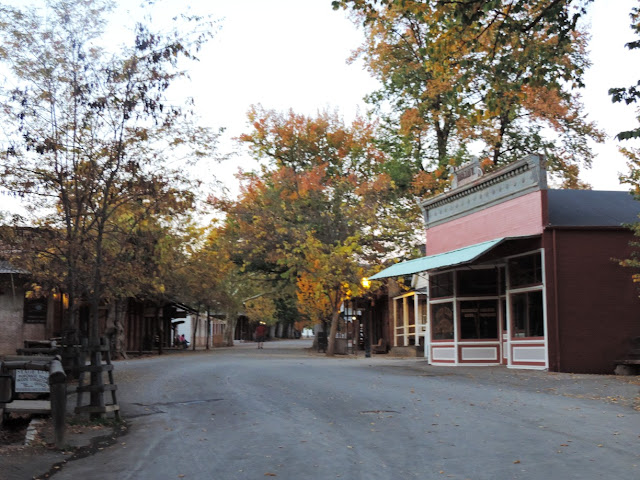 Fifty million years ago, the Sierra Nevada didn't not exist as a mountain range. There were the eroded remnants of an ancestral Sierra Nevada that developed during the late Paleozoic and early Mesozoic eras when masses of land slowly mashed into the western edge of North America, and when subduction zones produced magma that eventually became the granite of the high Sierra. Those mountains were gone, and instead there were slow-flowing rivers that had their origin in what is today central Nevada, with hints of headwaters much farther away, perhaps even Canada. The rivers flowed into a coastal complex that was characterized by swamps, jungles, and sandy beaches. These ancient rivers were ultimately diverted here and there by lava flows, which forced the water into new channels that became today's rivers, like the Stanislaus and Tuolumne. The ancient river gravels that remained were perched on high flat ground between today's river canyons. The gravels often contained gold, but something very odd happened at the site of Columbia State Historical Park. It involved karst topography. 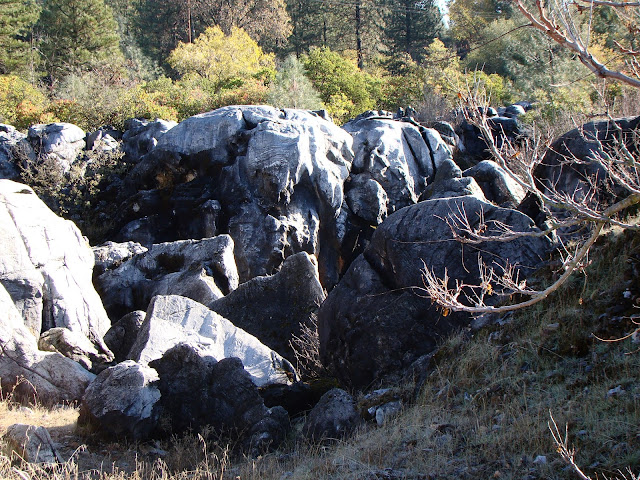 The rocks near Columbia form a landscape unlike those found anywhere else in the Mother Lode, or anywhere in California for that matter. The limestone that formed in Paleozoic oceans 300 million years ago was recrystallized by heat and pressure into marble. Groundwater moved through cracks and fissures in the marble, widening the fissures, and in some cases forming caverns. A channel of the ancient rivers flowed over the roughened surface, and the fissures captured stunning amounts of gold. Eventually the rocks lay covered by two or three meters of soil and gravel. Until the miners found the gold... 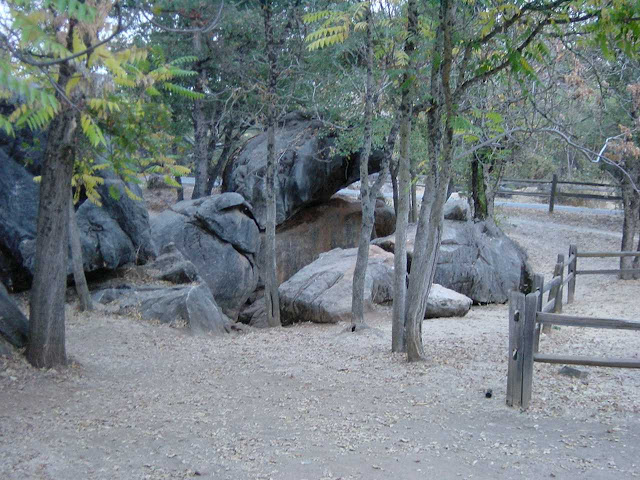 The gold deposits at Columbia were unbelievably rich. According to some estimates by geologists of the California Geological Survey, some 4 million ounces of gold, worth about four billion dollars at today's prices was mined here. The entire production of gold in California over the last 150 years amounted to about 110 million ounces, so this one mining area produced a significant percentage of all the gold mined in California. 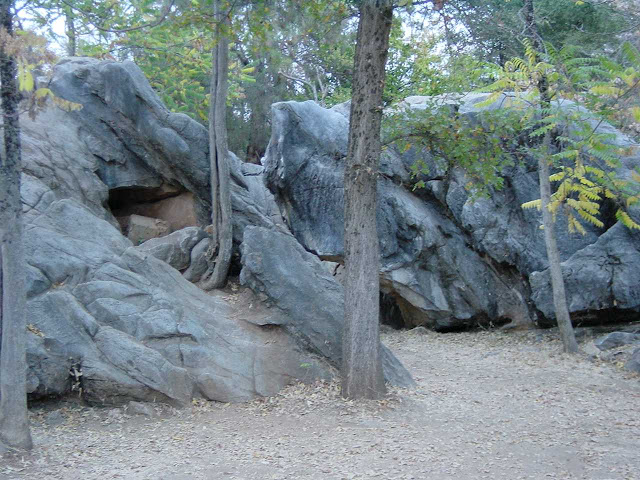 This gives us an explanation for the strange landscape around Columbia. The miners had very little water from local sources, so flumes and penstocks were constructed to bring water from higher parts of the Sierra Nevada. Instead of using sluice boxes or pans, the miners shot water cannons at the soils, moving vast amounts of sediment and quickly exposing the gold (this was called hydraulic mining). Parts of the town were built on gold-bearing soils, and there was the occasional suspicious fire that destroyed buildings, allowing the miners to blast away a bit more ground. What they left behind was a kid's wonderland of boulders, fissures, and small caves that is every bit as fun as Tom Sawyer Island at Disneyland (I'm disappointed that I didn't grow up as a kid around here. I had to settle for Tom Sawyer Island at Disneyland...). 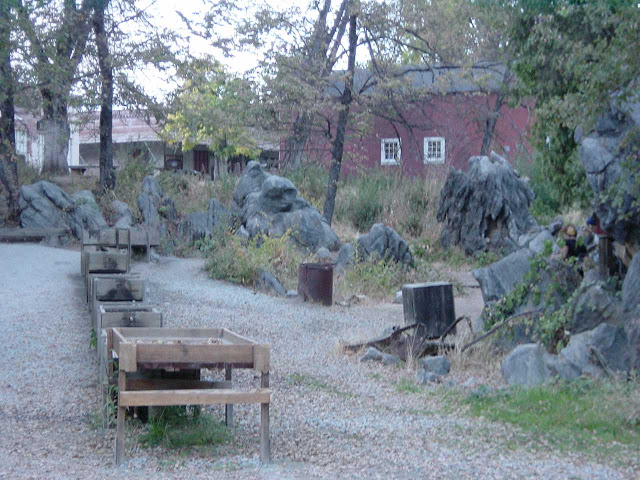 It's probably no surprise to realize that the Gold Rush was a disaster for the native cultures in California. The indigenous people already been decimated by European diseases and unfortunately some of them lived in gold country. They never had a chance against the influx of tens of thousands of miners from all over the world. Some tribes disappeared entirely, and others barely hung on to their lives and culture. 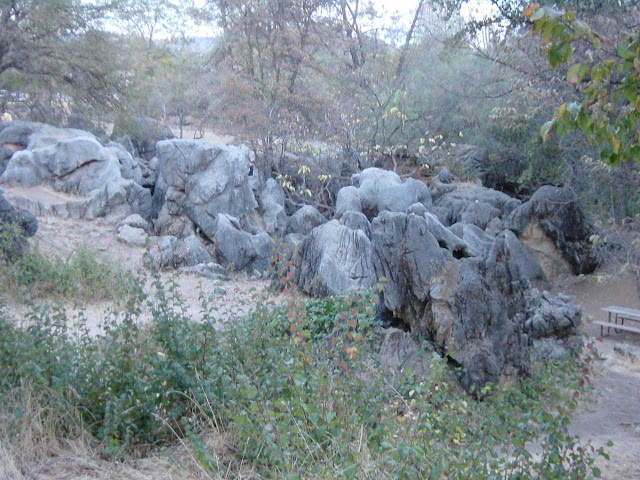 Columbia hung on as a town after the gold deposits gave out, although the downtown area fell into disuse. In the 1930s, efforts began to make the area a state park, and in 1945 the town center was established as Columbia State Historical Park. The stores and restaurants were refurbished and visitors are treated to park employees and business owners in period dress. And a dandy candy store that is often the only business still open when our students arrive in town at the end of our field trip.

I can see how a seafloor becomes enriched in calcium carbonate due to falling microorganisms. But it seems like geology is ruled by entropy. Rock types are eroded and mixed with other rocks and becomes a hodge podge. What led to gold existing in enriched veins or other deposits? Why wouldn't it have been turned over and over through all the geologic events over the millenia?