Rivers often get used as a metaphor for life. Writers might compare the exuberance of youth with the dancing streams and waterfalls at the headwaters of rivers, and the calm deep waters of the big rivers denote adulthood. And of course, there is the "Old Man River". In a way, geologists once did the same thing, designating different stages of river erosion as "youth", "maturity" and "old age". On a planet that is so active, rivers rarely follow the script of such simplicity. Rivers undergo constant change, and some parts of river systems can be older than other parts. The watersheds can be altered by mountain-building events, lava flows, landslides, and other dramatic changes in a landscape. The Tuolumne River certainly fits that bill.
The river seems "normal" enough. It has headwaters high in the Sierra Nevada in Yosemite National Park, it has carved a deep canyon along the middle stretches, it flows onto the plains of the Great Valley of California, joins up with other rivers, most notably the San Joaquin (although the San Joaquin hasn't contributed significant water to the system in many decades), and finally ends in the delta complex at the head of San Francisco Bay.

But there are significant deviations. In the high country of the Sierra Nevada, the river flows across a mostly horizontal landscape for a number of miles. Tuolumne Meadows could almost be described as a swampy stretch of river, especially during the spring runoff in wet years. Then the river plunges headlong into a deep gorge, complete with waterfalls and cascades that would be more characteristic of the headwaters.
Along the ridges and slopes high above the present day river, there are stretches of river gravels from a long-gone ancestral Tuolumne River, one that may have had its origin in central Nevada. Other ancestral Tuolumne Rivers lie within the sediments of the Mehrten Formation that form bluffs around the present-day river in the foothills. These mudflow deposits (and occasional lava flows) record a time when volcanoes erupted near the Sierra Nevada crest only 9-10 million years ago. 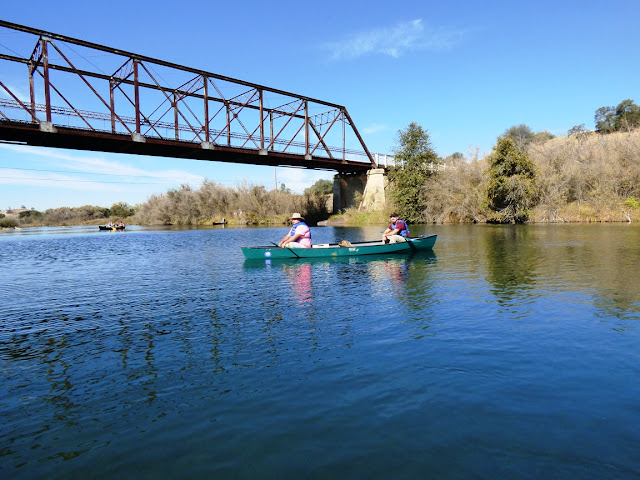 I had a marvelous opportunity to explore 2% of the river last week, courtesy of the Tuolumne River Trust. The trip was a three mile long canoeing expedition (the river is 149 miles long, thus 2% of the river), from the Old LaGrange Bridge to the Old Basso Bridge. It was a yearly event, the "Paddle with the Salmon" trip. This part of the river flows among the lowest foothills of the Sierra Nevada, just a few miles upstream from where the river emerges onto the floor of the Great Valley at Waterford. 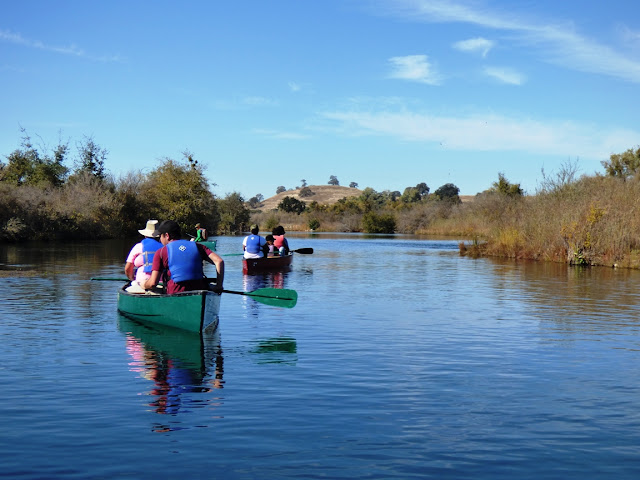 2% of a river doesn't sound like all that much, but there is a lot of geological history wrapped up in those couple of miles of river. Old LaGrange Bridge was built in a spot where the granitic and metamorphic rocks of the river disappear beneath sedimentary layers. There are three named formations in this part of the Sierra Nevada foothills: the Ione, Valley Springs, and Mehrten formations. They encompass around 40 million years of geologic history. 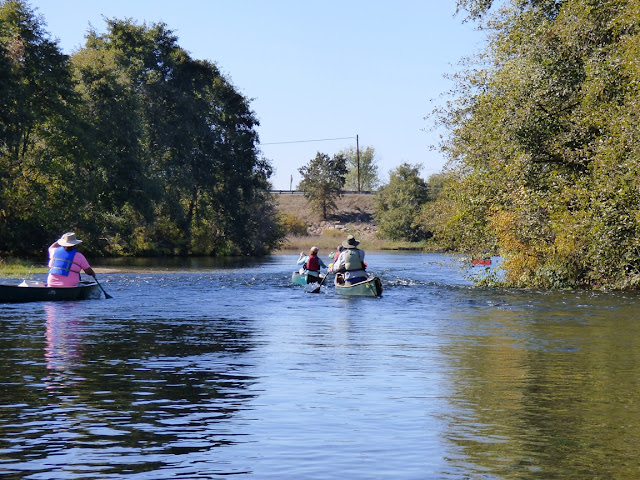 Around fifty million years ago, the region was very different. The Sierra Nevada, which had been an Andean-sized mountain range throughout most of the Mesozoic Era (the age of the dinosaurs), had been deeply eroded to what amounted to low hills (in many interpretations anyway; the issue is "under discussion" in research circles). Large rivers with a source at least as far east as central Nevada flowed across what would later become the crest of the present-day Sierra Nevada. These rivers flowed into a tropical coastal complex that included swampy estuaries and extensive sandy beaches. The resulting Ione formation has been mined for low-grade coal called lignite, for clay (used in ceramics), and the beach sand has been mined for glass-making (you can tour one of the old mines at Black Diamond Mines Regional Preserve near Antioch). We drove past exposures of the Ione where we got onto the river. 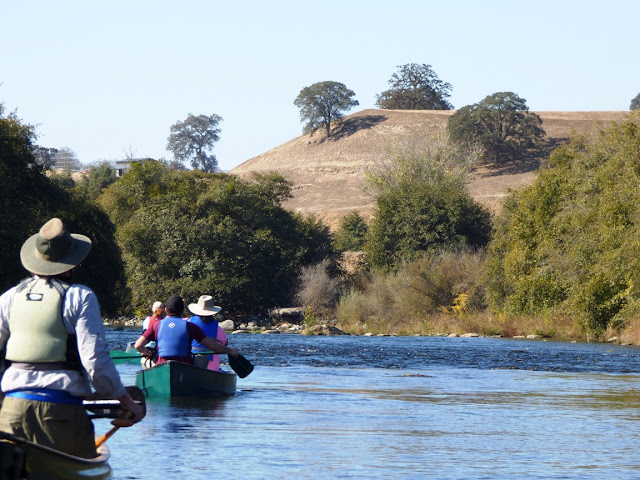 The river sediments, called the Auriferous Gravels were also mined, much to the detriment of the riparian habitat of the Tuolumne River. "Auriferous" means gold-bearing (Au is the chemical symbol of gold). Miners turned the river upside down in their search for the elusive metal. They used pans and other placering methods at first, but by the early 1900s they were using large floating barges called dredges. The dredges would be floated in a newly dug pond (filled by seepage from the high water table), and giant shovels ate away at one edge of the pond. They processed the sediments for the gold on the barge itself, and then used a conveyor belt to dump the waste rock at the other end. In other words, the dredges were sailing across the landscape, carrying their ponds with them.
The dredges remained active through the early 1970s. The dilapidated remains of an abandoned dredge can be seen just a couple of miles from our section of the river, off LaGrange Road. The remains of a dredge maintenance camp can be seen on a bluff above the river at Old Basso Bridge. One of the old dredge fields has been preserved as a county park called the Joe Domecq Wilderness. 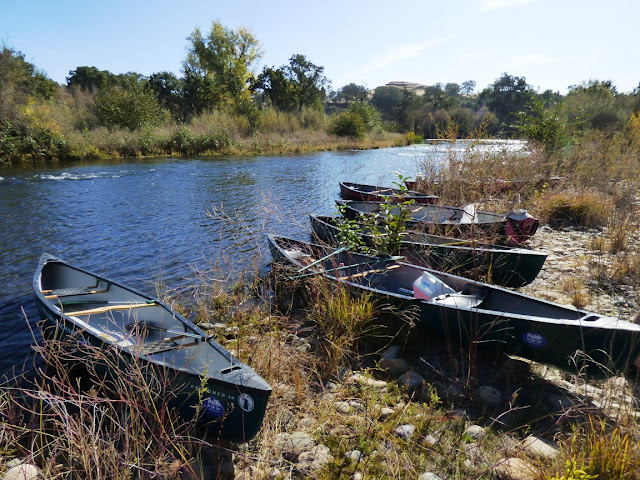 Many of the efforts of the Tuolumne River Trust involve the rehabilitation of the riparian habitat along the river, to assist in the recovery of the population of Chinook Salmon and other native species. There is a lot of work to do. The dredges were terribly efficient, with the emphasis on "terribly". The heritage of the mining efforts are barren fields of boulders. The fertile soils are long gone. 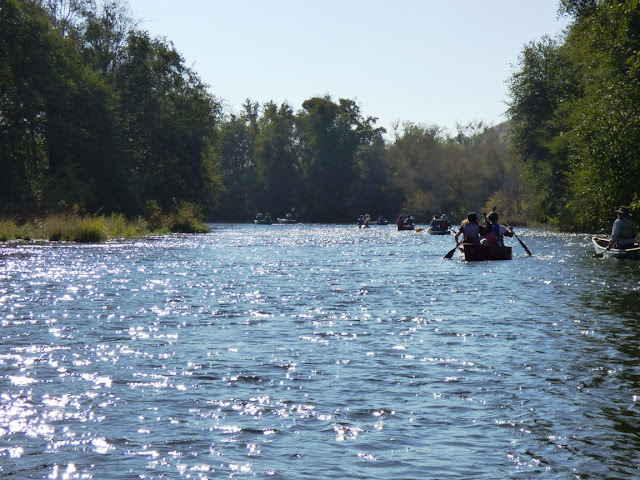 Near the end of the rafting trip we passed buff-colored exposures of the Valley Springs formation. The layers contain volcanic ash and tuff from gigantic eruptions of rhyolite calderas (so-called "supervolcanoes"). Incredibly, the eruptions took place in central Nevada. These ash layers traveled hundreds of miles! There were Native American grinding stone holes in some of the exposures. 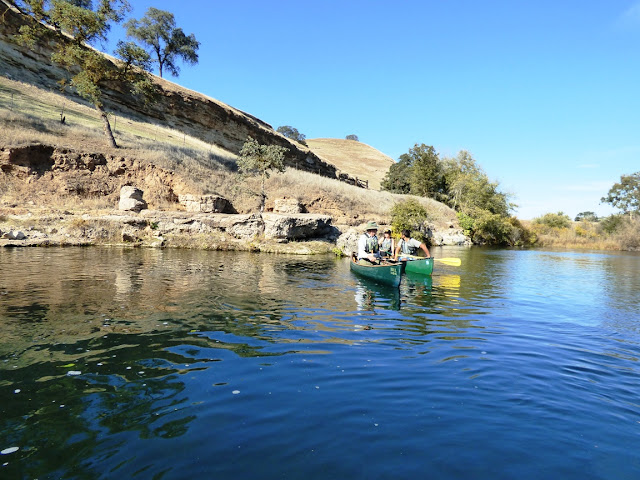 In the hills above us we could see ledges and cliffs of the Mehrten formation. From about 11 million to 7 million years ago, eruptions from andesite volcanoes near the crest of the present-day Sierra Nevada produced huge lahars, or volcanic mudflows that choked old channels of the ancestral Tuolumne River. The river would shift in response to the disruption and establish new channels. The rivers flowed across low plains populated by various species of camels, horses, antelope, and mastodons. There were also large Galapagos Tortoise-sized turtles, and strangest of all, 8 foot long salmon with large teeth variably described as tusks or saber-teeth. Despite the fearsome teeth, they probably fed on small prey. If you would like to learn more about the salmon and the turtles, check out the new exhibit at the Great Valley Museum at Modesto Junior College. 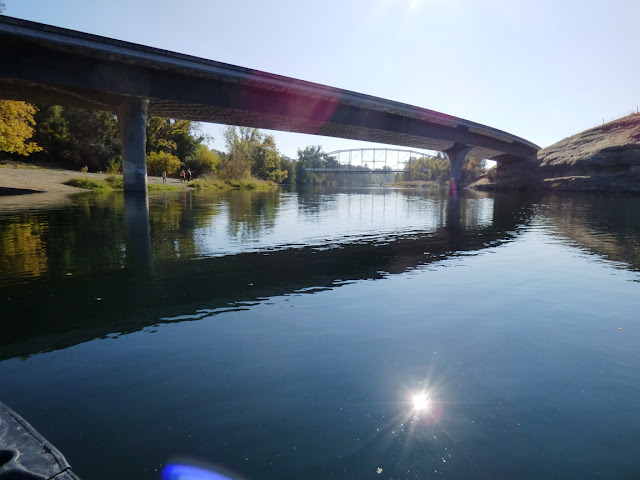 We only saw a few salmon during our float trip, but that was okay. We know they're out there. What we did see was 40 million years of Sierra Nevada history exposed along just 2% of the river's length. What a marvelous adventure in the past (and in the present day as well)! I deeply appreciate the kindness of the Tuolumne River Trust for allowing me to join in on their journey. 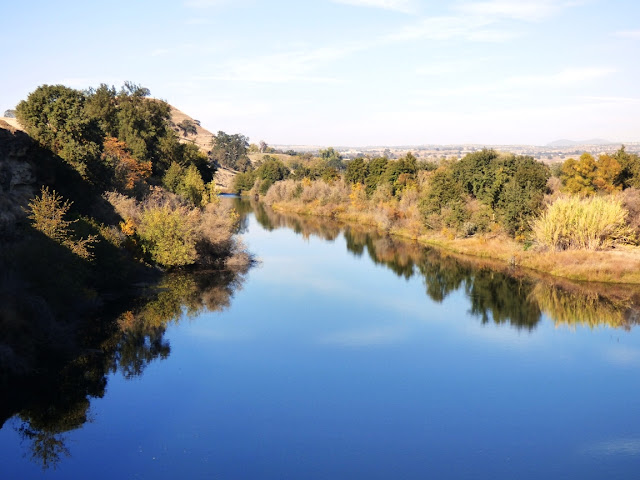