What Defines a Wilderness? Is it the Barrenness or the Richness? The Joe Domecq Wilderness Area and Gold Dredging

Wilderness [wil′dər nis]:
1. A neglected or abandoned area of a garden or town.
2. An area essentially undisturbed by human activity together with its naturally developed life community.

Can these two meanings be reconciled? I'm used to the definition of wilderness as it was written into the 1964 Wilderness Act: a contiguous area of at least 5,000 acres (7.8 square miles) that is as close to a primeval natural state as is possible. The landscape where I live has precious little remaining wilderness: the Great Valley has less than 5% of its original ecosystem. The Sierra Nevada has more open space and wilderness, but mostly in the high country. The deep forests of the middle elevations have been extensively logged, while the foothills were upended in the search for gold. The rivers have been mostly dammed.
The dredging of Sierra Nevada/Great Valley rivers for gold was a particularly destructive form of mining. Put into practice long after the famous Gold Rush of 1848-53, dredging was an example of business getting serious about their "business". A great deal of fine-grained gold was not being captured by the usual mining methods and was lost downstream. Around 1898 the first successful dredge was placed in operation. It was a floating factory with large shovels on one side and a conveyer belt on the other. The shovels dug up one end of the pond, processed the sediments through sieves and mercury-coated copper plates, and then dumped them out the other end. In this way, the dredge sailed across the landscape, "dragging" its pond along. It was horribly efficient, as the miners could profit when there was only 18 to 20 cents of worth of gold in a cubic yard of gravel.

How was this destructive? The mining process destroyed the natural soil of the river floodplains and replaced it with barren piles of boulders and cobbles that were no longer useful for pretty much any other purpose. Especially the growing of crops. Many tens of thousands of acres of valley floor were permanently altered. A dredge field on the Merced River in my area is nine miles long and half a mile wide. Similar amounts of land were dredged on the Tuolumne River that flows by my home town. 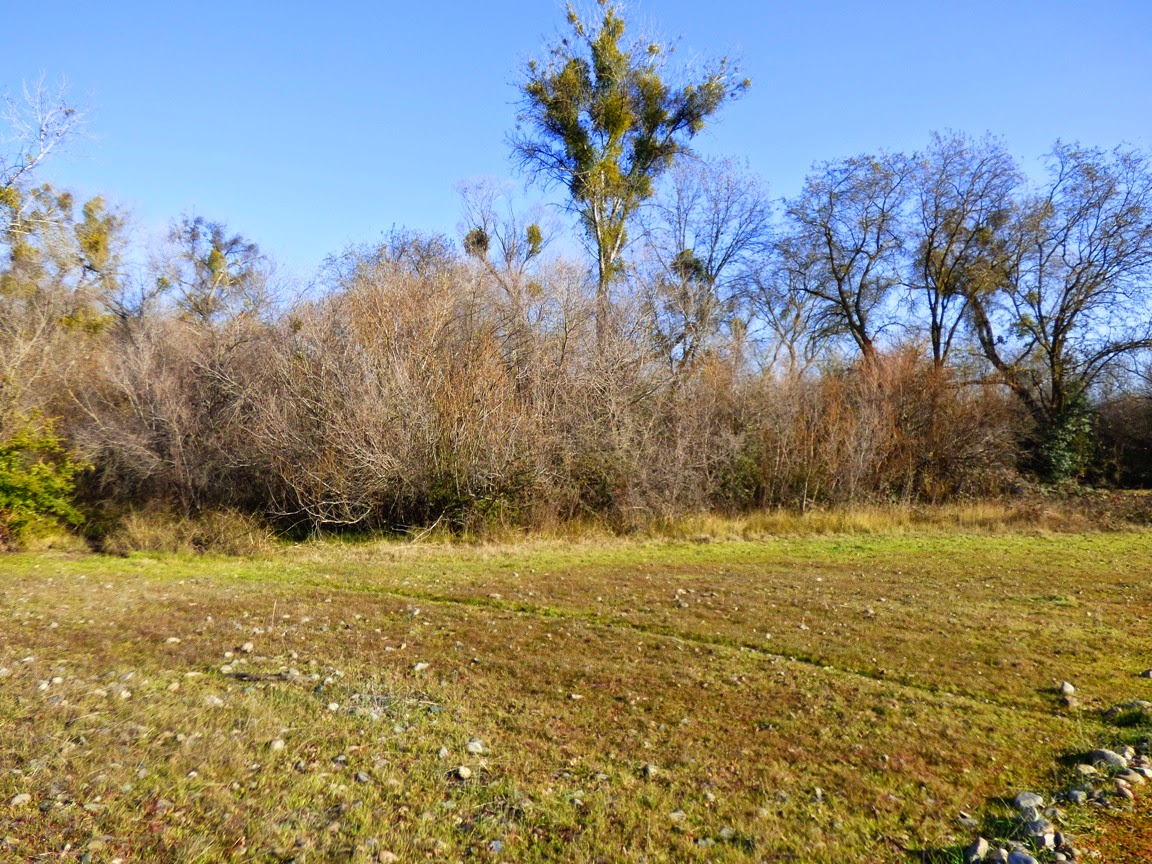 So here is the source of my opening question. After fifty or sixty years of abandonment, the dredge fields are returning to nature, after a fashion. Cottonwood trees have taken root here and there, and the old dredge ponds have formed tule thickets and swamps. The other day we were visiting Turlock Lake State Recreational Area (the lake stores water for irrigation). We continued up the road and more or less by accident discovered that we had a "wilderness" area right in our own backyard: it's called the Joe Domecq Wilderness Area, and is part of the larger La Grange Regional Park administered by Stanislaus County. We were intrigued and walked in. 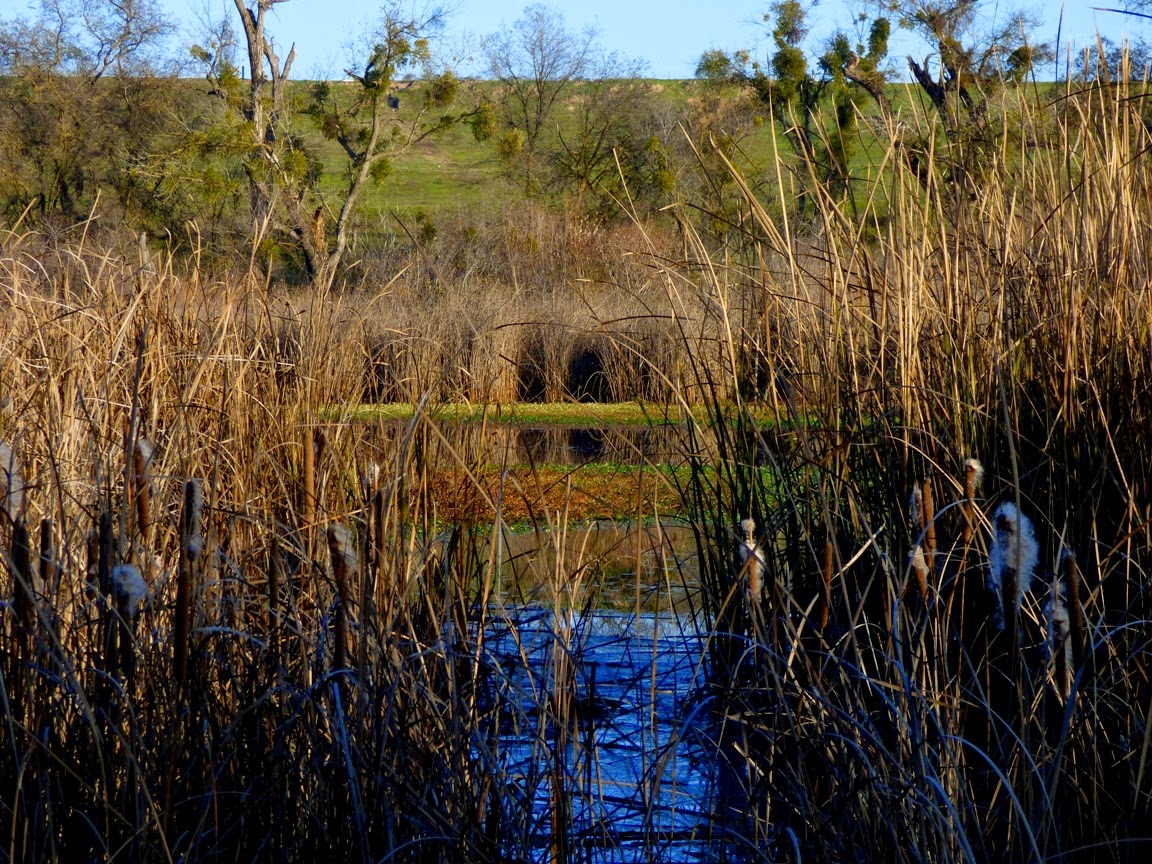 The wilderness preserves about 270 acres of dredged lands and includes a pond, swamps, cottonwood and eucalyptus woodlands, and grassy meadows. Despite the horrific damage done to the original landscape, the environment has now recovered enough to provide a rich habitat for birds and other creatures. The preserve is minimally developed (rough trails, two picnic tables, no bathrooms), but there is plenty of land to wander about, especially if one is interested in birds. 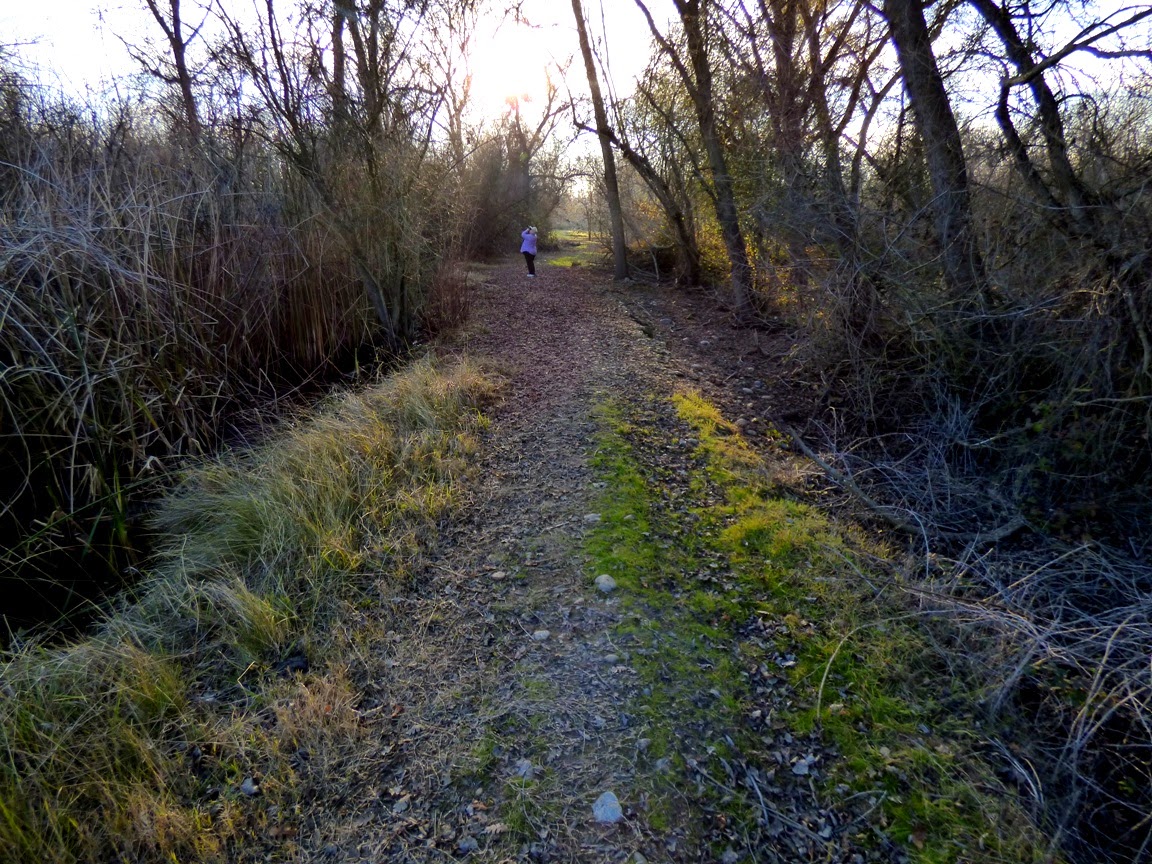 As we explored, the woods were alive with bird songs. We meant to have a brief look, and stayed for two hours. I got a number of bird pictures, including one or two that I haven't seen before. 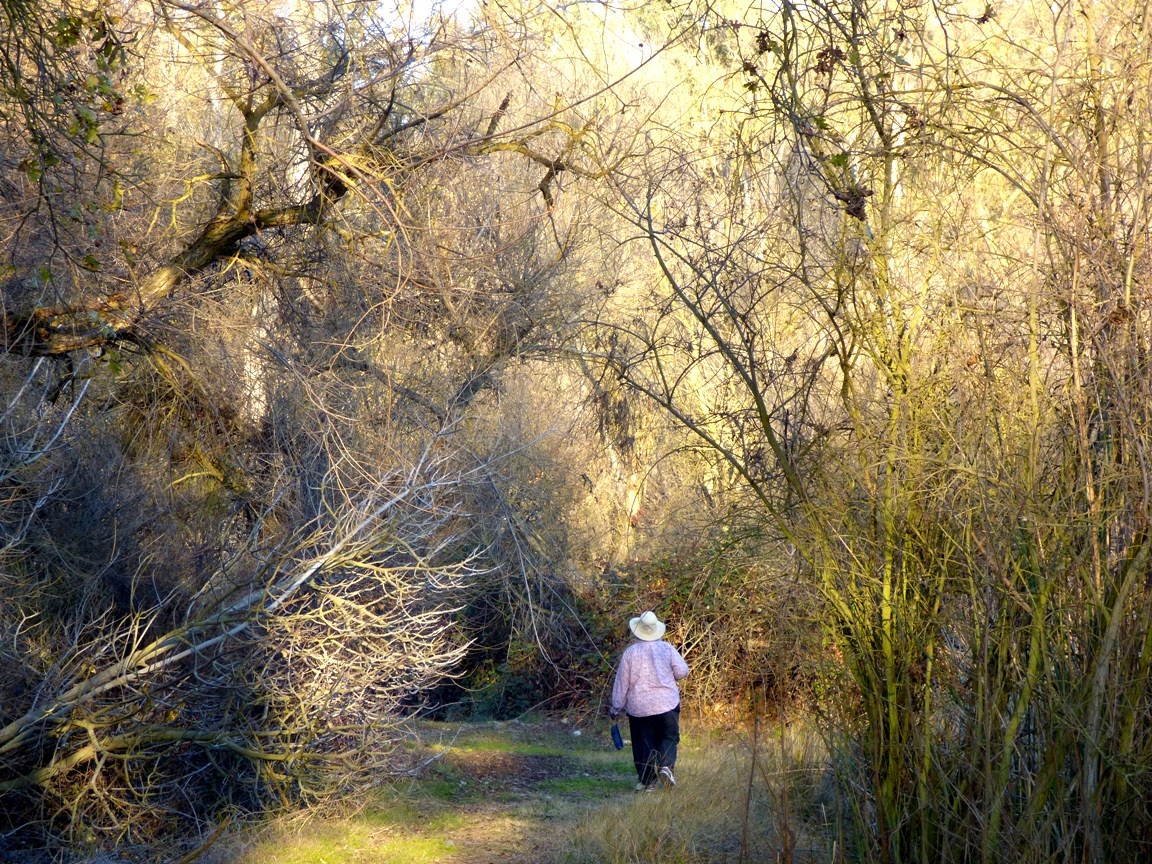 Before returning home, I walked out onto Old Basso Bridge, the old Highway 132 crossing of the Tuolumne River. It's across the street from the wilderness area. It's been replaced by a modern bridge and is reserved for pedestrians now. This area around the riverbank provides one more piece of habitat for the local animal life, including salmon during the right season. 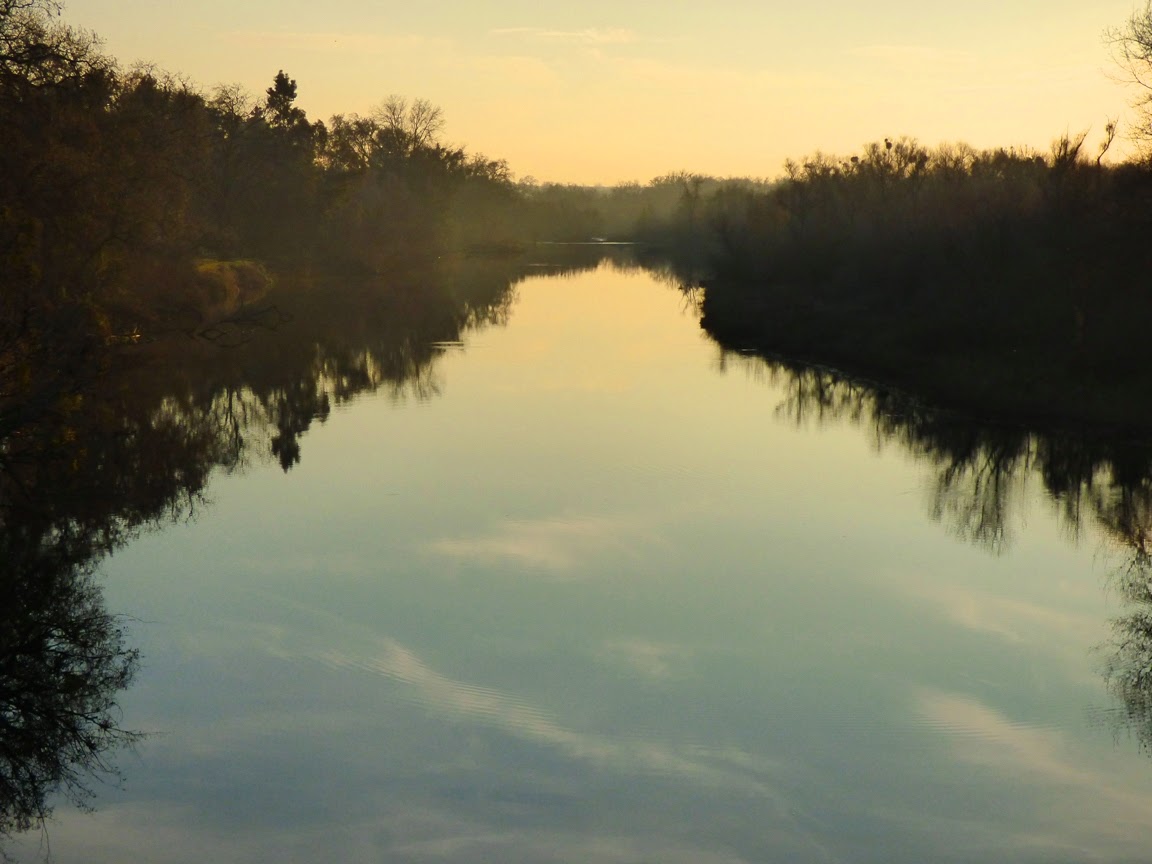 It was a pleasant discovery, and nice to find that the abandoned barren lands can be rejuvenated. If you would like to see some of the birds we saw, make the jump below for some pictures.

The first birds I saw were some small Bushtits migrating through the underbrush. I thought they would by impossible to photograph, but when I stood still enough, they moved to within five feet of my location. If you would like to see more pics of these darling birds, check out my post at Geotripper's California Birds.

I spied an Osprey perched on a snag across the pond. I thought it would be the top dog of the local environment, but it was soon chased off by a large Red-tailed Hawk (below).
I've discovered lately that American Robins are fond of the local environment during the winter (again, see my recent post at Geotripper Birds). There were a number of them in the trees above.
The was also a lot of activity on the forest floor. Can you see the Fox Sparrow in the picture below? It has some excellent plumage for staying invisible among the leaves.
The shrubs were occupied by several small birds, including a Yellow-rumped Warbler...
...and a Ruby-crowned Kinglet. I was lucky to get both shots; they were both flitting rapidly amongst the bushes.
The last bird of the day was an Acorn Woodpecker. It was pulling out one of its stored acorns in the top of an old Cottonwood tree. I saw a group of them (called a "descent") earlier in the day. You can see their pictures here.
Addendum: Just after I posted this, fellow earth science teacher and friend Ryan posted a picture of the dredge that still sits abandoned just a few miles away from the wilderness park. Check it out here: https://twitter.com/phaneritic/status/553833725637570561/photo/1
Posted by Garry Hayes at 12:20 AM

I think the operative word here is "park". Many cities in the Los Angeles Basin where I live have "wilderness parks". Most border the national forest, others the rivers. It's a jurisdictional or administrative meaning. The feds operate "wilderness" such as Sheep Mountain Wilderness while the state/ county or city operates the "wilderness parks". There is a different legal definition of wilderness for each type.

Here in New Zealand we had exactly the same thing. It was an international enterprise and the people and technology travelled between here and California. Ive done a post about the activity in the river just at my back gate. While most of that was in the river, downstream about 50Kms vast areas of flat land was turned over. http://thefieldofgold.blogspot.co.nz/2012/09/gold-from-river.html
And there is another post with more photos.
http://thefieldofgold.blogspot.co.nz/2010/11/wreck-in-river.html

Thanks for the links. Fascinating!