One of California's Most Precious and Endangered Ecosystems: Riparian Oak Woodlands

Ask people who know California what ecosystem has declined in area by more than 90%, and chances are they will answer "the Redwood forests". And they would be right. But given that there were once millions of acres of Redwood forests, it is also true that there are still a few large wilderness areas in the Redwoods, including a national park and many state parks.
If they think a little harder, they will answer "and also the prairies and grasslands of the Great Valley", and they will also be right. Almost all the native grasslands have been co-opted by agriculture, and that is kind of a shame, because the losses are continuing today as "hedge-fund" almond orchards are eating up tens of thousands of acres of grasslands with no secure source of irrigation water. 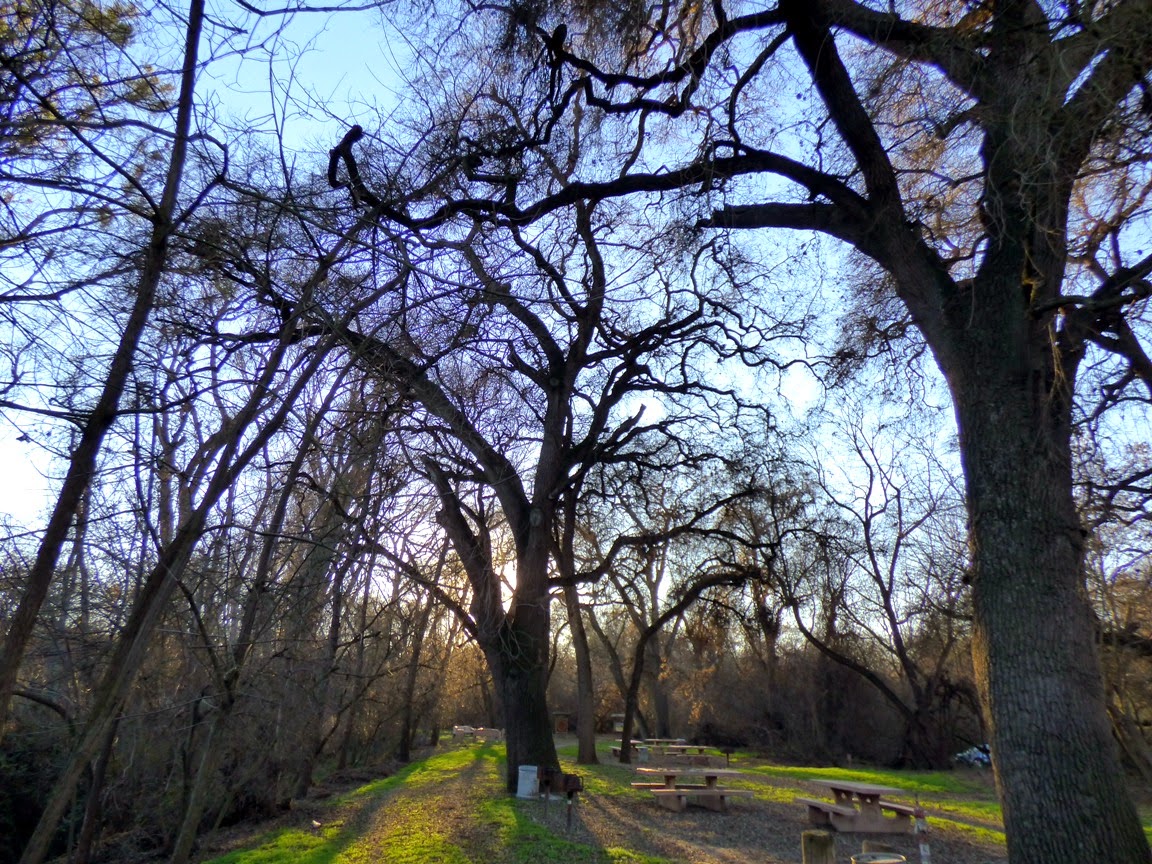 As they think more deeply, and develop a sad look because they don't like the direction these thoughts have gone, they will answer "and also the riparian oak woodlands". And they will once again be sadly right. The Great Valley once had hundreds and hundreds of miles of dense woodlands along the many rivers that flow out of the Sierra Nevada and into San Francisco Bay. Most of those woodlands have disappeared as levees were built, floodplain farms were planted and rivers were dammed (damned), cutting off the flow of the water. Precious few areas remain of these gloriously chaotic forests. 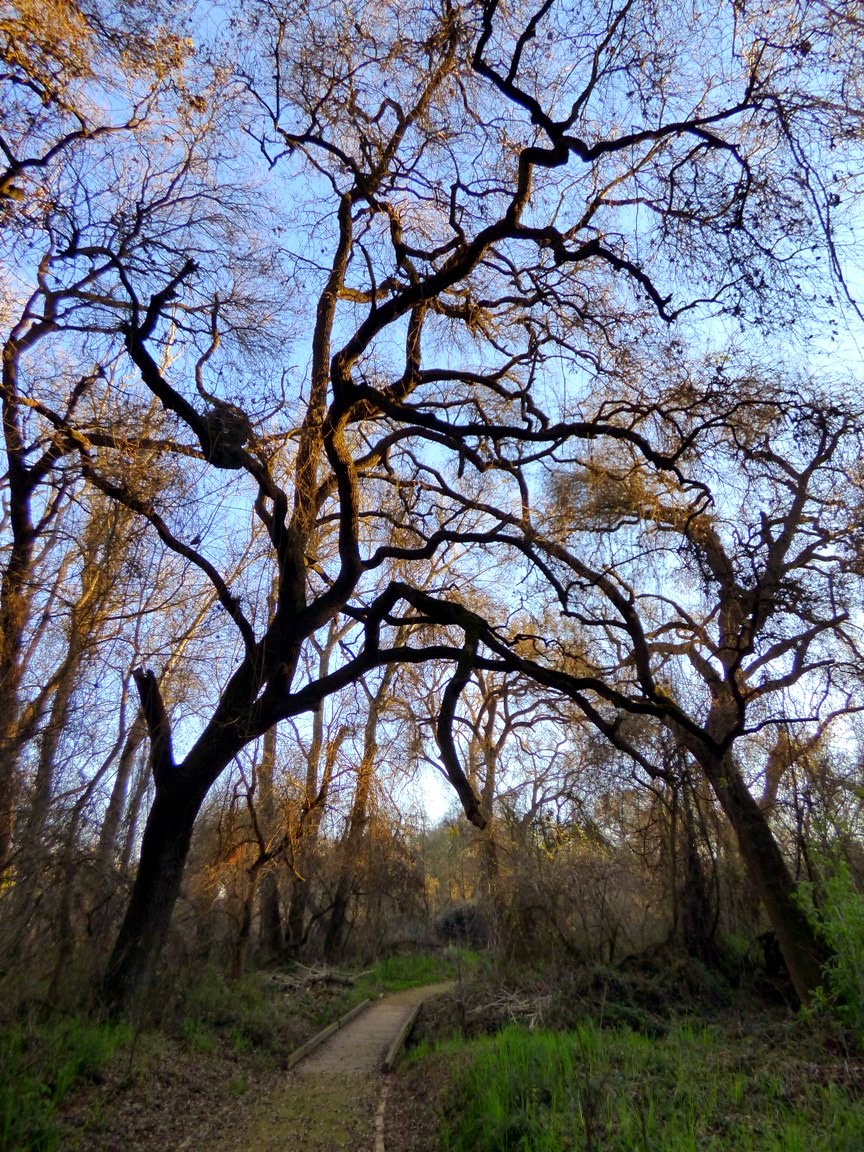 We spent the afternoon in one of the small remnants of these riparian (river) forests. Caswell Memorial State Park preserves 258 acres (about 2/5 of a square mile) of woodlands along the Stanislaus River near Ripon and Modesto. It's been developed at one end into a campground and picnic area, but the rest is managed as a de facto wilderness area, traversed only by a few trails, and consisting mostly of dense oak forest with an impenetrable undergrowth of shrubs and bushes (including a lot of poison oak, which discourages off-trail travel.
It's a popular summer destination for the locals, with a nice picnic area and a sandy beach along a slow moving stretch of river. During weekdays, many local schools take their kids on field trips, but on this late Friday afternoon we had the entire park to ourselves. Not a single other person in either parking lot. We happily wandered along some of the trails as the sun sank low onto the horizon, which wasn't visible because of the dense forest (see that top picture). 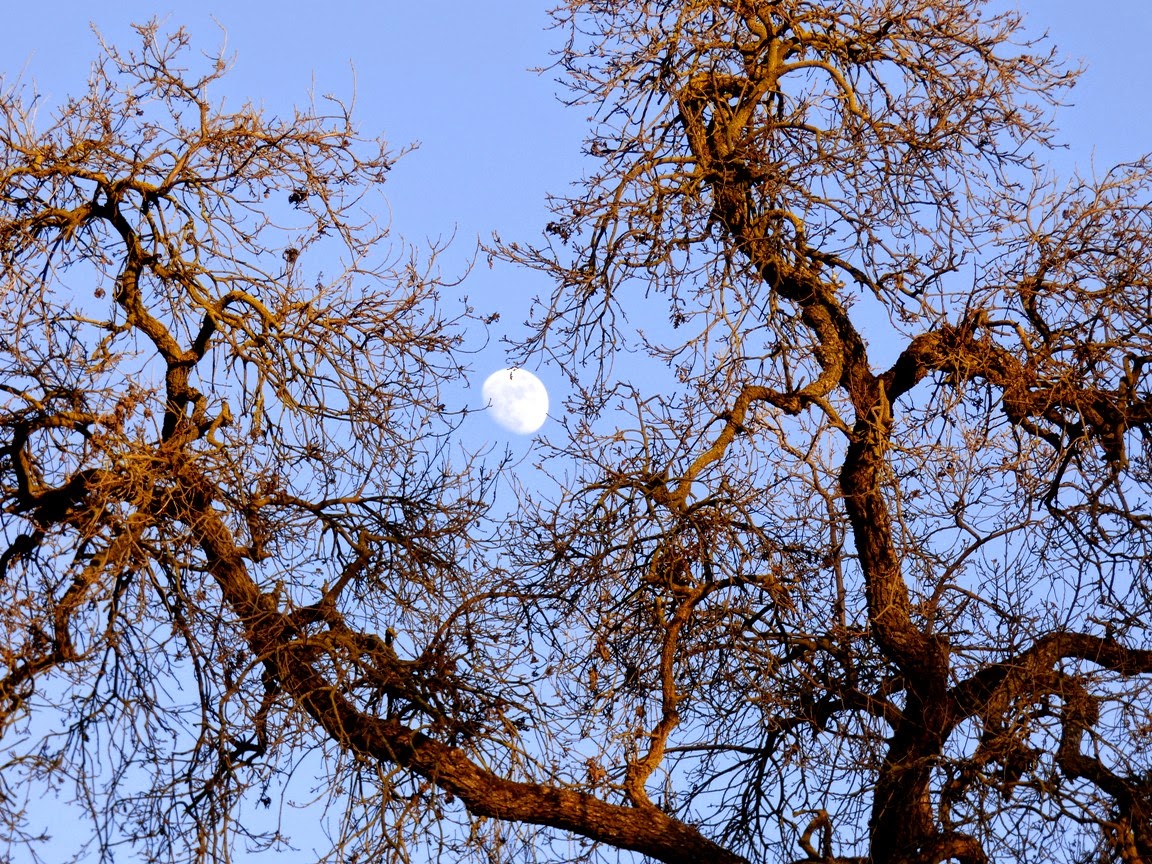 The park was once the home of the Yokuts people, but their populations were decimated after European contact. The Spanish missions, smallpox, malaria, and war with the Mexican Army eventually ended their existence in this region. The Stanislaus River is named after Estanislao, a Native American who led a rebellion against the Mexicans in 1829.  Decades later the lands were purchased by Thomas Caswell, and in 1950 the land was given to the state of California to preserve the woodlands. 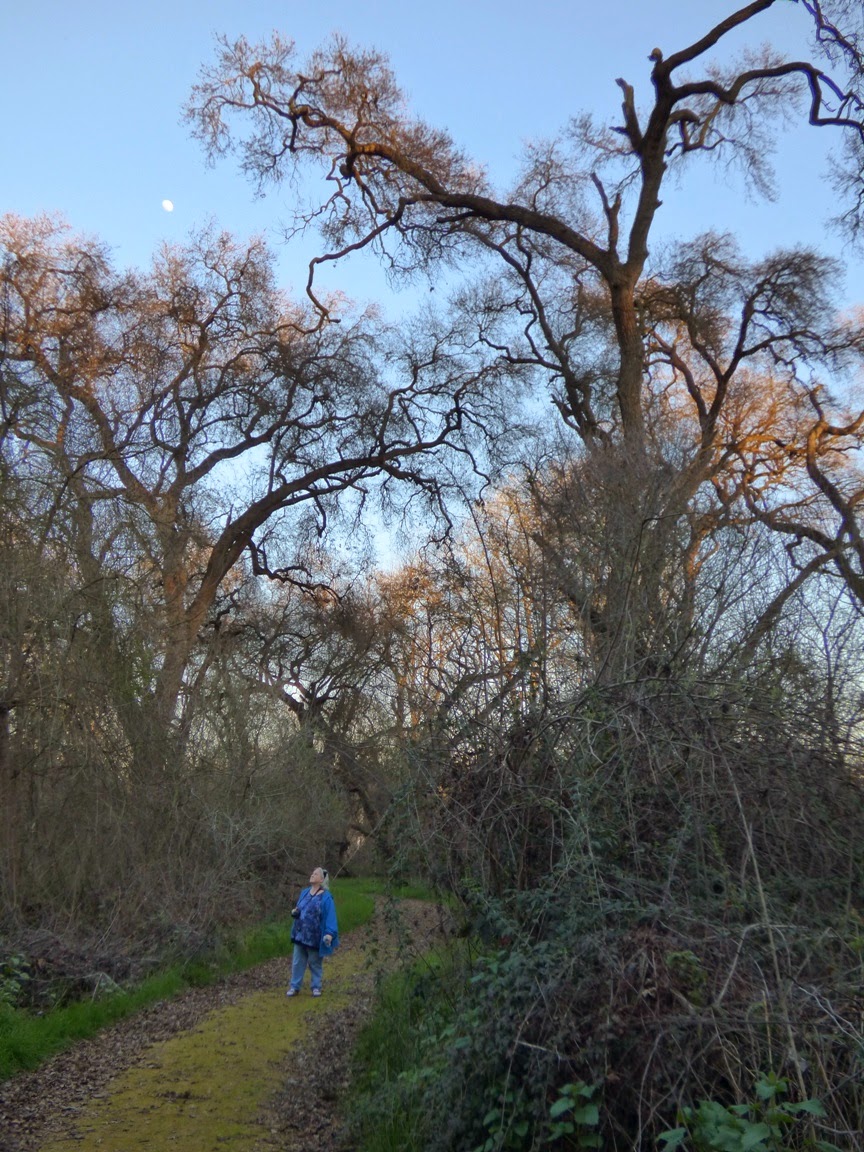 Despite its small size the park preserves the only known natural habitat of the Riparian Brush Rabbit (Sylvilagus bachmani riparius), a subspecies of the Cottontail.  The original counts in the early 1990s suggested that only 200 or 300 of the rabbits remained, but the floods of 1997 were catastrophic, and only a few seemed to have survived in the park. Some were later found living in the San Joaquin Delta area, and a small population has been established at a ranch just downstream. Many of the rabbits have been captive-bred, trying to ensure their survival. 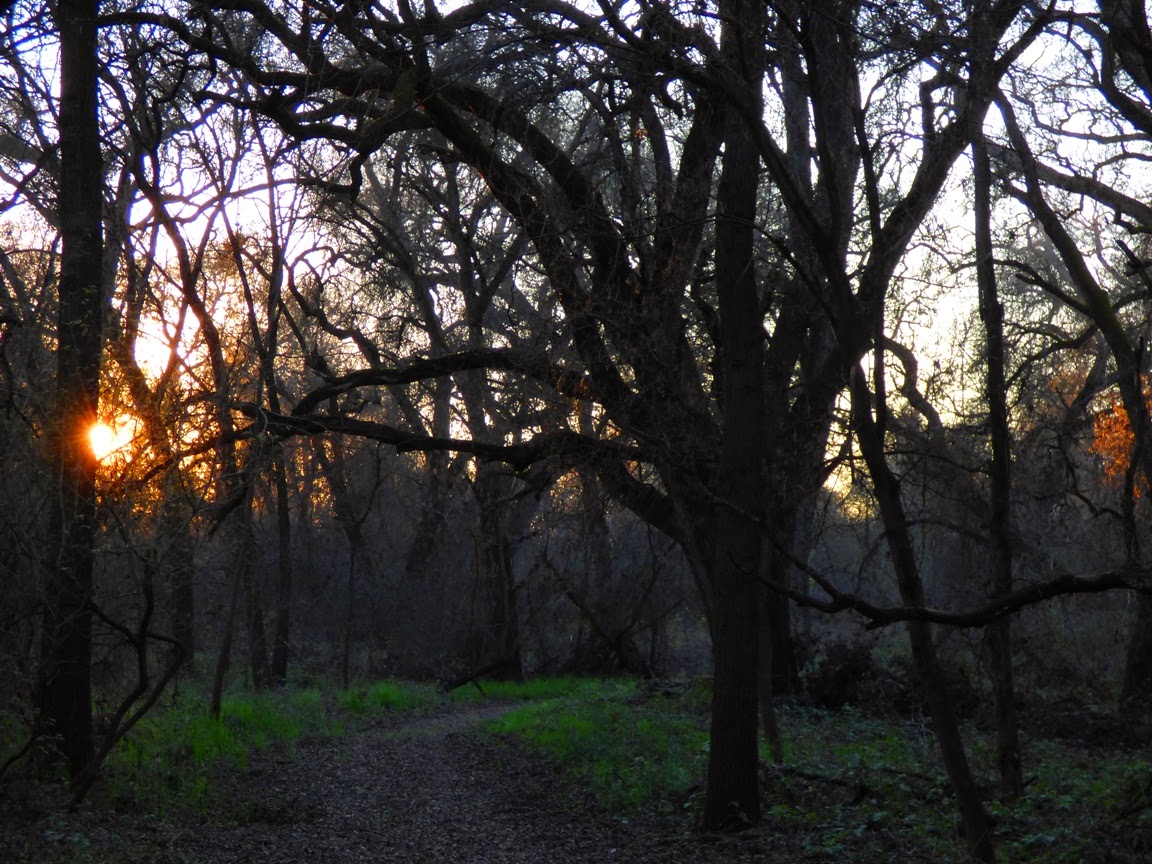 We might have been alone in the human sense, but the trees were alive with birds. They were mostly small and constantly moving so we weren't particularly successful in getting photographs, but we saw Ducks, Egrets, Juncos, Warblers, Starlings, Flickers, Vultures, and Hawks (and many others we couldn't identify), and we heard Sandhill Cranes in the near vicinity. 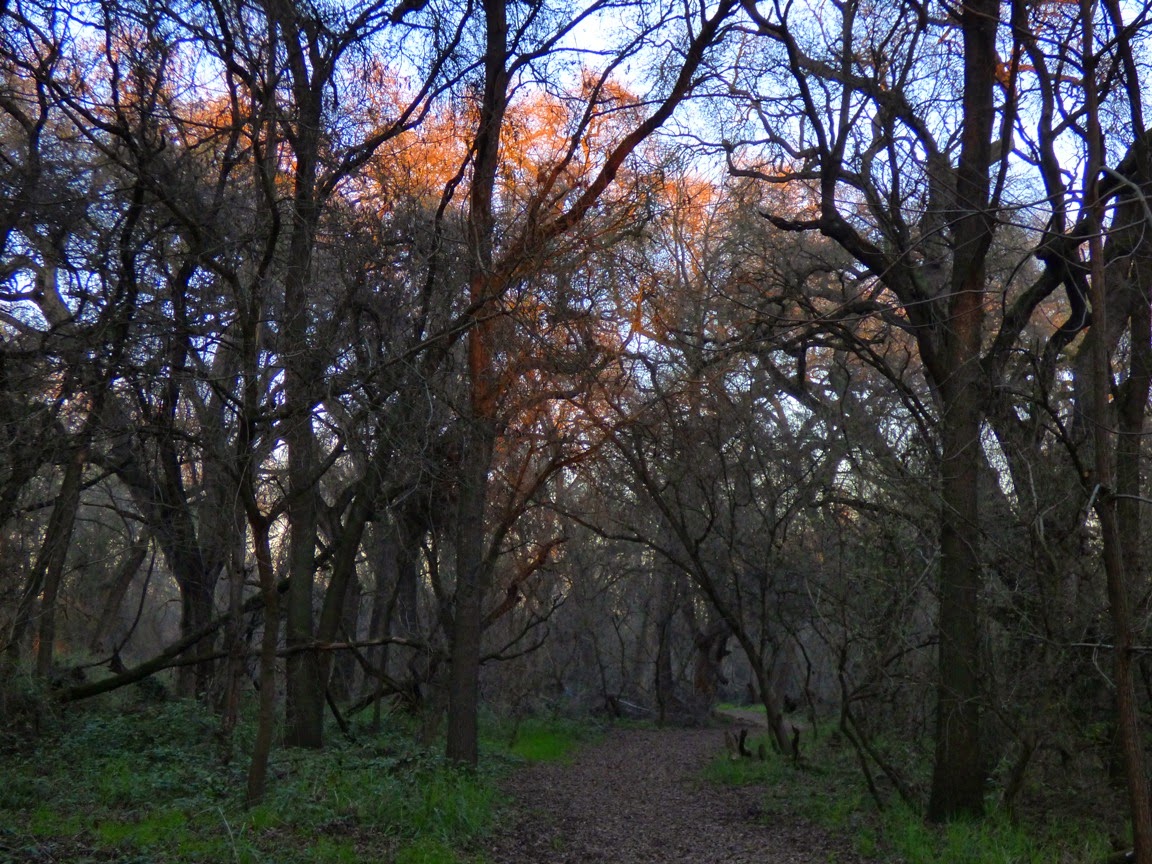 There were more than a dozen Turkey Vultures roosting in the trees above the river. I admit it was a little bit creepy having them all staring at us... 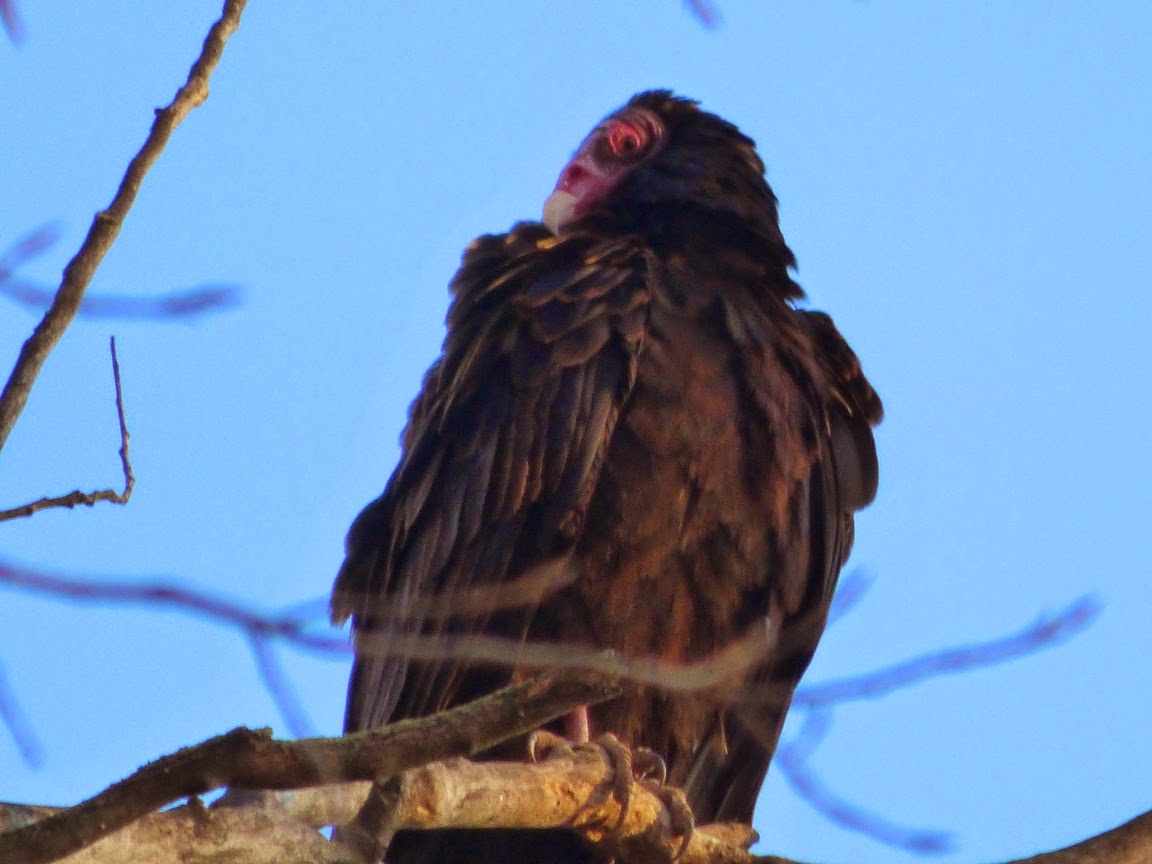 I was also lucky enough to catch one fairly sharp shot of a Northern Flicker, a species of woodpecker, in the trees above us. I heard it before I saw it... 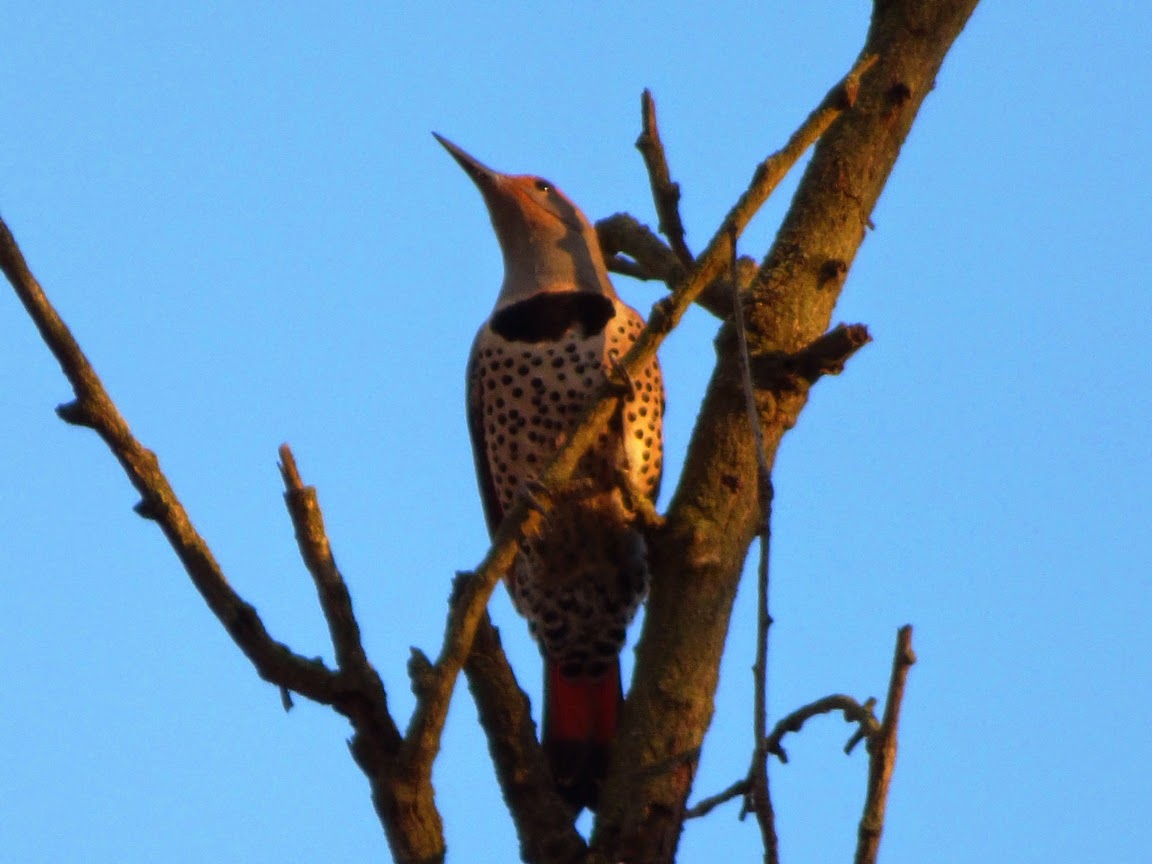 Caswell Memorial State Park is a special place, well-loved by many people in the local region. Given that most of them see it when the weather is hot, the picnic areas crowded, and the grass dead and brown, they would have been surprised at the serenity of the place this afternoon. It's a great place to see what the valley was once like, and still could be today, if we continue our vigorous efforts at reclaiming some of the wetlands for nature.
Posted by Garry Hayes at 12:21 AM