How many horror movies begin with people ignoring the warning signs, both literally and metaphorically? The doomed characters doggedly soldier on, minor disasters mount, and then major disasters. Today felt a little like that. At our second stop, two CHP units took up positions on both sides of the bus. Uh-oh...

It turned out they were there for the cow which had escaped the nearby pasture. We helped herd the wayward bovine back inside the enclosure. 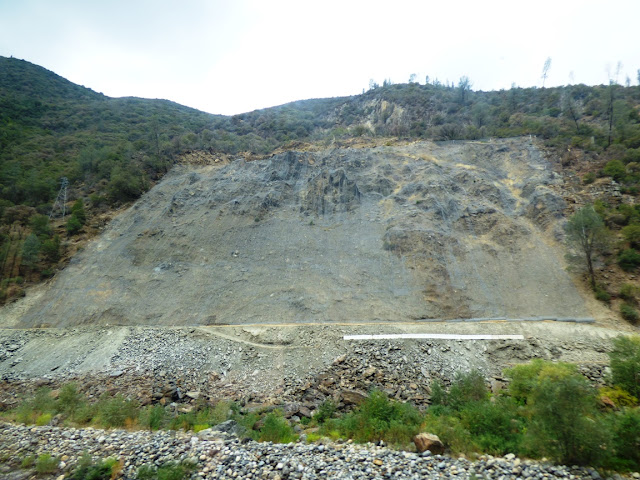 We passed the continuing effort to contain the huge Ferguson Slide, which collapsed into the Merced River and across Highway 140 nearly ten years ago. It's been completely covered with boulder containment nets, and they are apparently ready to start work on the rock shed that will allow future rocks to roll over the road and into the river. 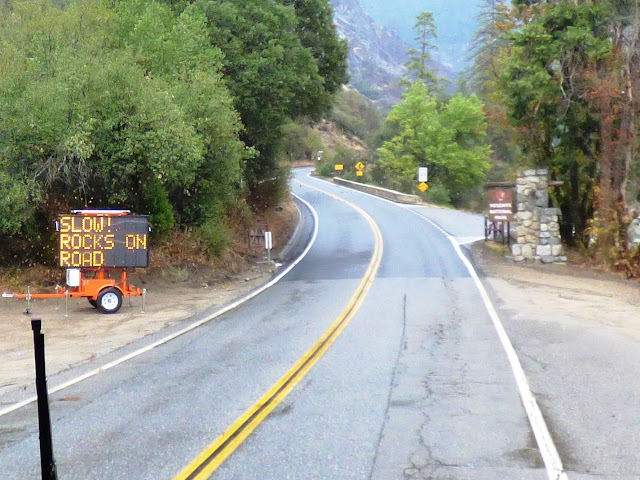 And then the first of the menacing signs. The rain had started falling, a true blessing in the drought, but why during our field trip? Because it was maybe a metaphorical sign, of course! Don't go on! 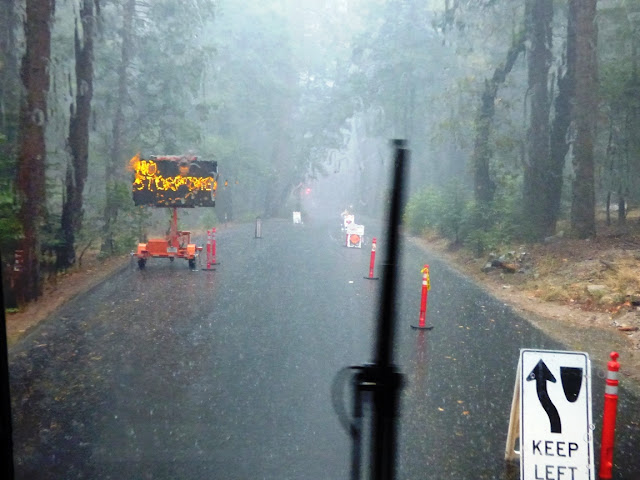 But the next sign said not to stop! What were we to do? 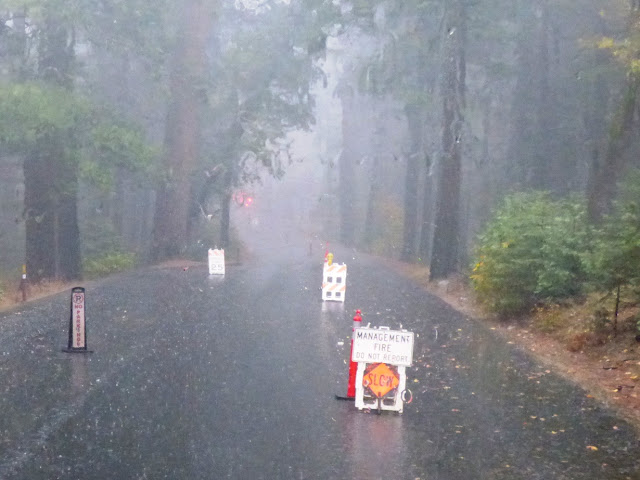 There were fires burning next to the road, and after all the horrific wildfires of last summer, one could hardly resist the urge to call and report the fire. But the signs said not to report! What were they trying to hide?
The actual reason for the fire of course was to try to bring the valley floor back into some kind of reasonable ecological balance. Fires had been suppressed on the valley floor starting when the park was established, but this turned out to be a bad idea. So many trees grew that the forest was too thick and full of fuel that a wildfire could have destroyed all the trees, not just some of them. By burning the forest when conditions are safe, the troublesome trees can be controlled without destroying the mature trees.

So we pressed onward, farther into the valley through rocks, wind, rain and fire, just daring the elements to interrupt our geological field studies. And then we found incredible things! The storm relented for a few moments at at time and the cliffs and towers of Yosemite began to peek out from behind the clouds. 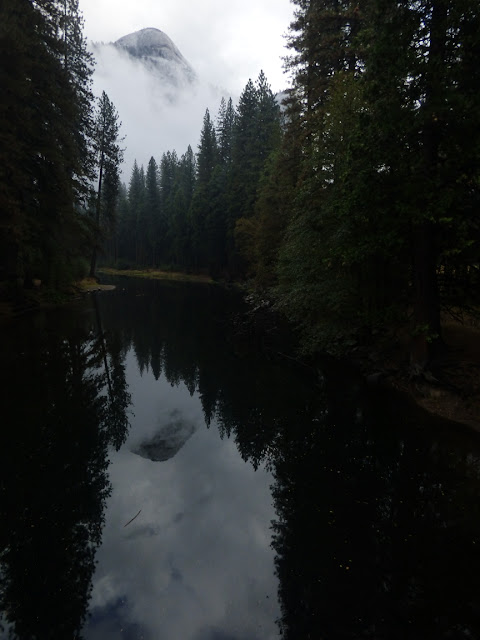 The fall colors were starting to appear here and there... 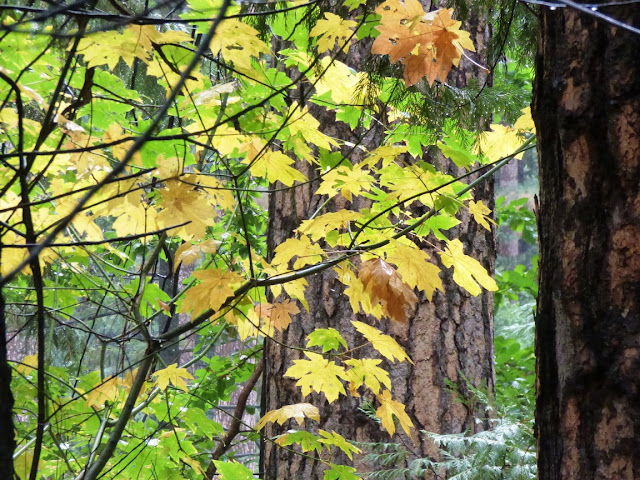 The clouds provided an interesting contrast to the forests and cliffs... 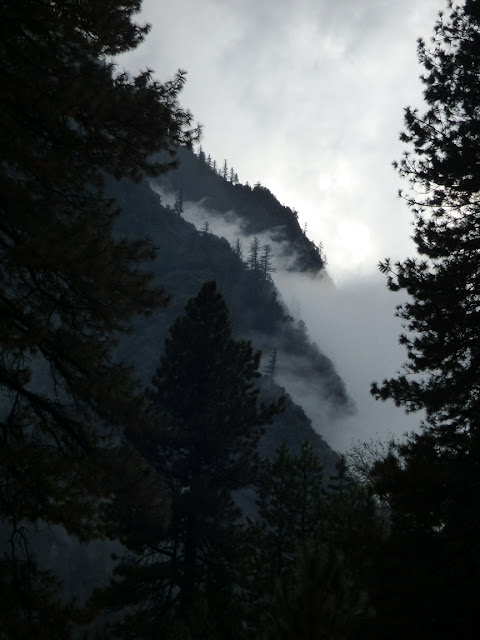 And at Yosemite Falls, we saw something precious and rare: flowing water. Two days of rain had rejuvenated the iconic waterfall, which had been dry since early summer. All in all, a challenging day, but also a spectacular day. And no crazed axe murderers! 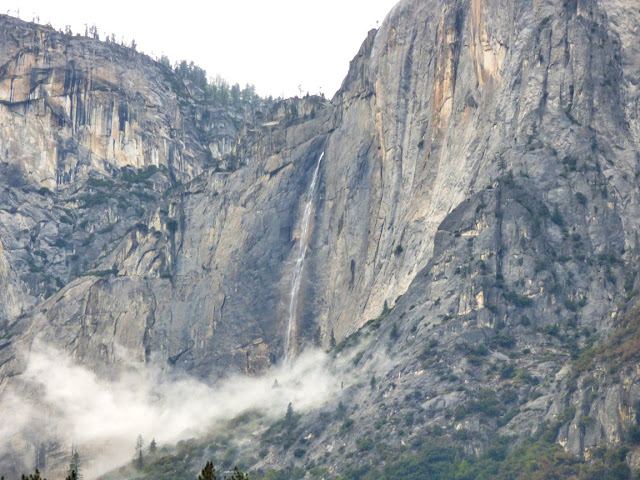