A Series of Fortunate Events: Why Settle for Half a Dome When You Can Have a Whole One? 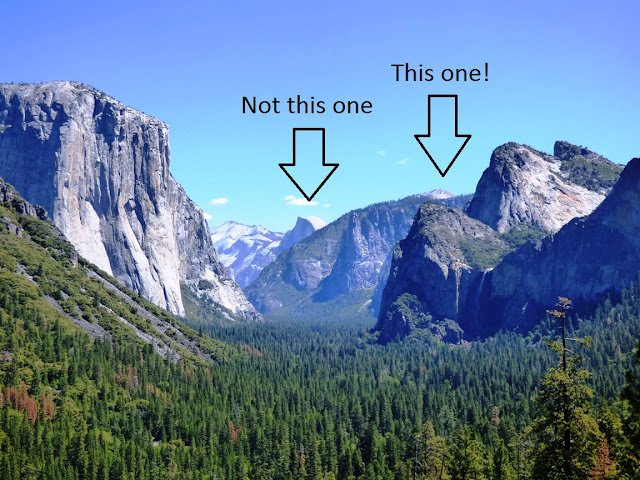 Imagine standing at one of the most famous park viewpoints in the world. Ask people standing in that place, the Wawona Tunnel Overlook at Yosemite National Park, how many granite domes they see, they might say just one. If they're feeling humorous, they might even say not just one, but half of one (let's discuss that point). But there are actually two of them. Sentinel Dome is the other somewhat less prominent dome, off to the right of Half Dome (see above). 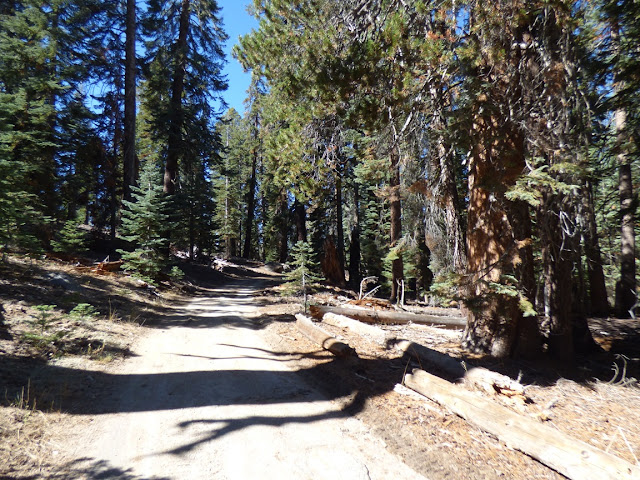 The hike to the summit of Half Dome is the stuff of legend. One must start very early in the day, hike seven or so miles to the summit pitch (climbing 4,000 feet in the process), and then trudge up a terrifying set of cables and steps on an impossibly steep flank of the dome. People have even fallen off the trail to their deaths. I've not yet had the privilege (of hiking, not falling), but hope springs eternal! 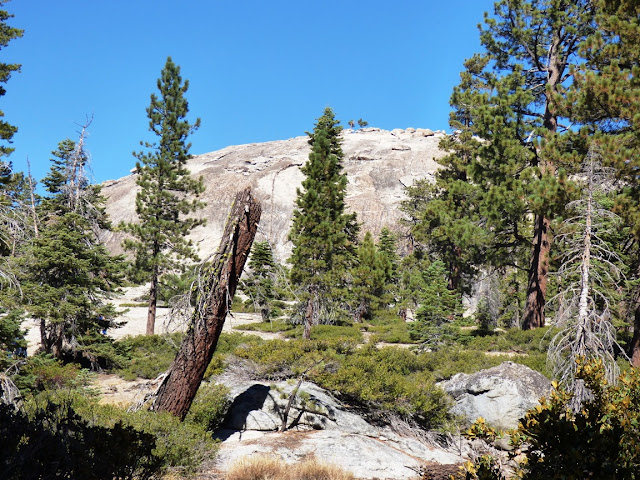 Sentinel Dome is also climbable, but it is not nearly as taxing to the body and soul. It's only a few hundred feet shorter than Half Dome in elevation, but it is also close to the Glacier Point Road, so hiking to the summit is more of a short stroll than an all-day expedition. And it has a marvelous perspective on Yosemite Valley and the surrounding territory. 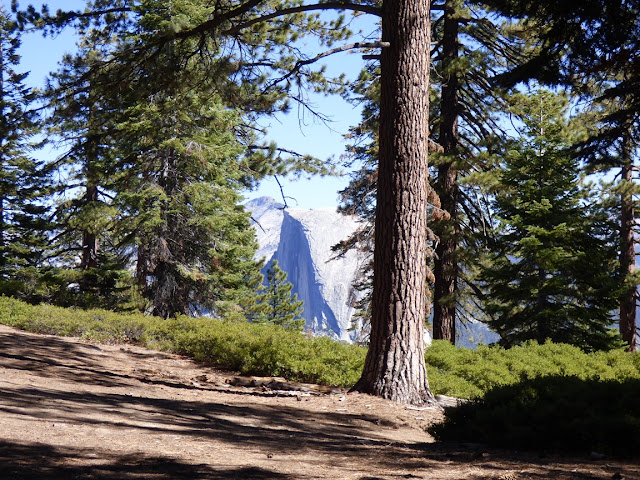 The official trail starts at the parking lot for Taft Point and Sentinel Dome trails. Get there early in the day because the parking lot fills quickly. These are popular trails. The hike to Sentinel is a mile, but if you are good with topographic maps, you can find an alternate route that is only half as long, and the parking area for the alternate way is almost always empty. 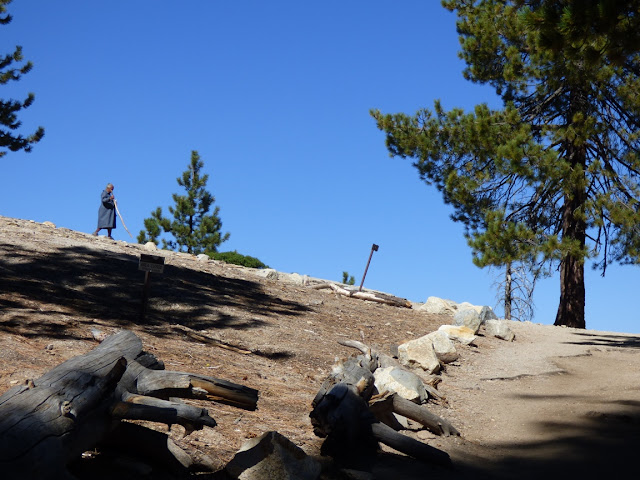 Which ever way you go, the trail passes through an open forest of Ponderosa and fir trees. As you near the ridge top, the sky opens wide and one can sense the huge chasm that lies beyond. 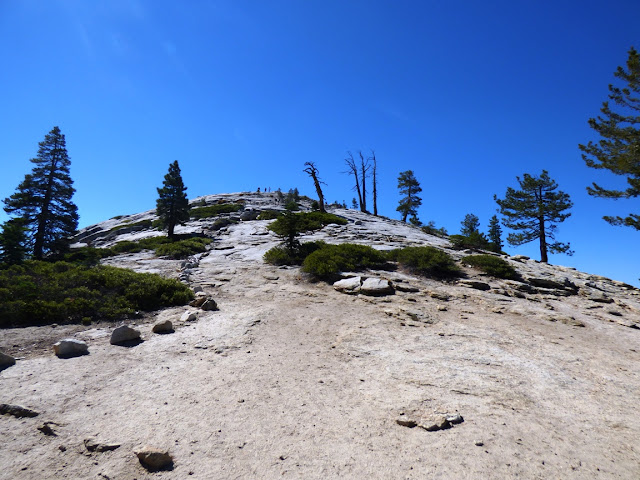 The summit area of Sentinel Dome is relatively barren of vegetation, and is instead an island of granitic rock rising out of the forest. The dome was not formed by the shaping effect of glaciation, and indeed glaciers never covered the summit. The rounding occurred because of exfoliation, the tendency of slabs of granite to break off of edges and corners. Walking the summit pitch one steps over the slabs like a stairway (below).

The exfoliation occurs because the granitic rock forms by the slow, slow cooling of silica-rich magma deep in the Earth's crust. The rock expands as it is exposed by erosion near the surface and fractures outward. The process still occurs in the region today. I've witnessed rockfalls from this very spot (see here for the story), and I posted last year about an exfoliation event in Twain Harte. 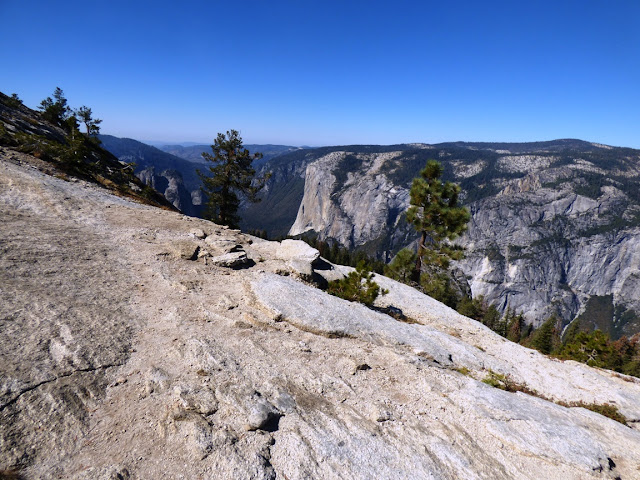 The view from the summit of Sentinel Dome is nothing short of spectacular. The Cathedral Rocks and El Capitan dominate the view west, while the Sierra Nevada foothills slope away in the distance towards the Great Valley. 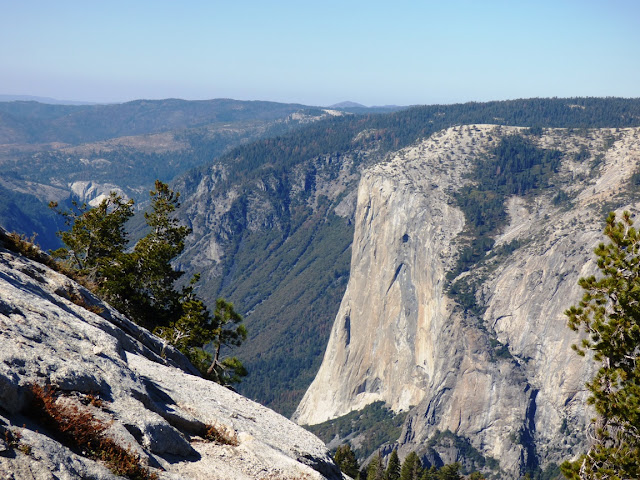 East and south, the view takes in the high peaks of the Sierra Nevada Crest and the Clark Range. 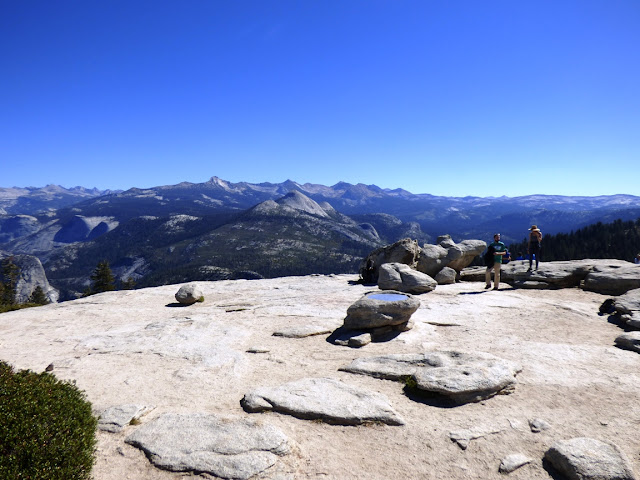 Half Dome and Cloud's Rest dominate the scene to the east. Tenaya Canyon and Little Yosemite Valley lie in the shadows below. Yosemite Falls, had it been flowing, would have been visible to the north.

There used to be an iconic tree, a windblown Ponderosa Jeffrey Pine, at the summit. It appeared in many National Park Service photos. A vandal girdled the tree with a knife, killing it. Even here, people can be jerks and worse. 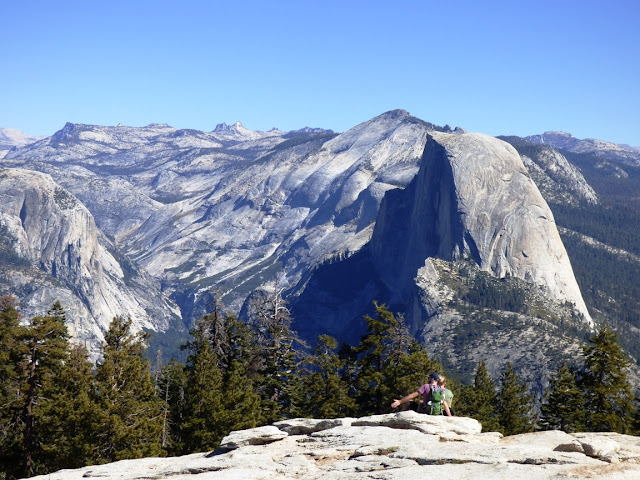 I took a 360 degree panorama with my video camera. It's linked below if you'd like to take a look!

We hiked back down to the cars and drove to the valley floor. The class was about the geology of Yosemite National Park, which encompasses over a thousand square miles. Yosemite Valley covers only about seven square miles, so we spent a surprisingly short period of time down there. We were headed for the high country, which we'll cover the in the next post!
Posted by Garry Hayes at 10:37 PM