I'm going to get into rhetorical trouble for this. "Greatest" is a hugely subjective term, and there are going to be some disagreements. But Mt. Shasta is California's greatest volcano. Not necessarily my favorite (though it might be), but the greatest. How does one judge such thing? My standard of the day is topographic prominence and topographic isolation.

Topographic prominence is the elevation difference between the summit and the highest or key col to a higher summit. Topographic isolation is the minimum great circle distance to a point of higher elevation. By those metrics, Mt. Whitney, the highest point in the state has the greatest prominence and isolation. It's 1,646 mi (2,649 km) to another mountain that is higher than Whitney, and it has a prominence of 10,080 ft (3072 m). But Whitney is surrounded by dozens of mountain peaks that are nearly as tall. It doesn't exactly stand out. But Mt. Shasta stands alone, with a prominence of 9,832 ft (2997 m), and it is 335 mi (539 km) to another peak that is higher (in the Sierra Nevada). In short, Shasta is a huge mountain that provides an awesome sight from all compass directions. And that's what today's pictures are about. 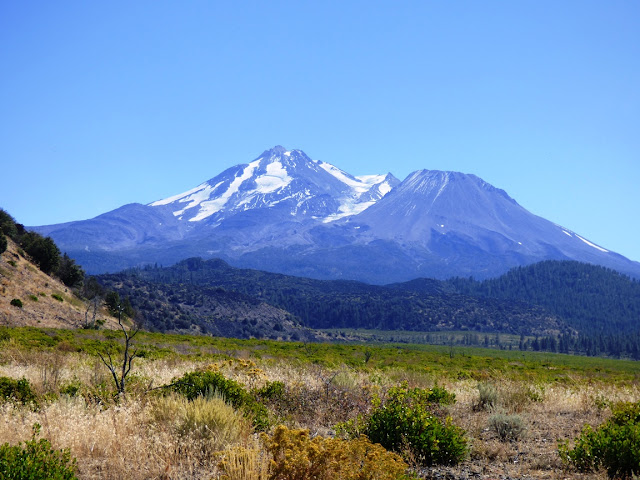 Last week we took four days to completely circle Shasta, first traveling north on Interstate 5 to pass by the western flank of the mountain, then following Route 97 to swing around the north side. We took Route 161 along the Oregon border to get to Tulelake and Lava Beds National Monument for a view form the northeast. We then drove over Medicine Lake Highland for a look at the south flank.

Shasta has a few other distinctions. It has the largest and longest glaciers in California (above). Whitney glacier is 2 miles (3.2 km) long, while adjacent Hotlum glacier covers 0.7 square miles (1.8 km2). Both glaciers have grown in size over the last fifty years, seemingly at odds with global warming. The growth is explained by increased precipitation over the years (from higher evaporation rates over the warmer oceans), even though temperatures in the region have increased 2-3 degrees. As warming continues, the growth spurt will end, and so probably will the glaciers themselves.
Another strange aspect of Shasta is the unusual hummocky surface that extends north from the mountain for 28 miles (43 kms), almost to the town of Yreka. The lumpy surface is the remains of a gigantic debris avalanche that destroyed a previous incarnation of Mt. Shasta around 300,000 years ago. The avalanche was not recognized for what it was until a similar event traveled 12 miles from Mt. St. Helens in the eruption of 1980. The landslide is one of the largest ever documented in the world.

Volcanism has been taking place at Mt. Shasta for around 600,000 years, but most of the cone-building has happened within the last 200,000 years. Shasta is actually an edifice of four different cones that formed at different times. The Sargents Ridge and Misery Hill cones are the oldest, and the least obvious. Whitney Glacier follows the edge of the Misery Hill crater.

Shastina erupted around 9,700-9,500 years ago, and the main peak, Hotlum Cone, has been erupting during the last 9,000 years. The most recent volcanic episode may have been only 200 years ago. Several villages have been constructed on the flanks of the volcano, including McCloud, Weed, and Mt. Shasta City. Around 20,000 people call the volcano home.

Unless you count the Lemurians. And the Atlanteans. Such a prominent mountain could not be without legends and myths, and Shasta has plenty. Tired half-conscious climbers have reported seeing survivors of the Atlantic disaster wandering the upper slopes, and an entire cottage industry swirls around the mysticism of the mountain, and all the beings who live in gigantic underground cities within the volcano. I suppose it all makes sense... 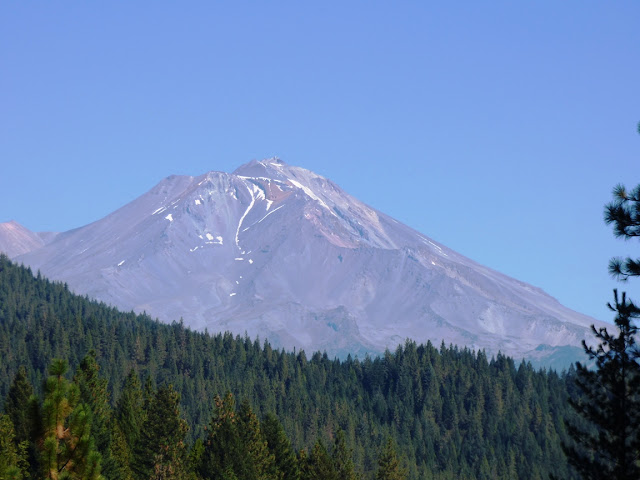 it is a beautiful volcano and so are your images :)