A Series of Fortunate Events: Glacier Point, Living Up to the Hype 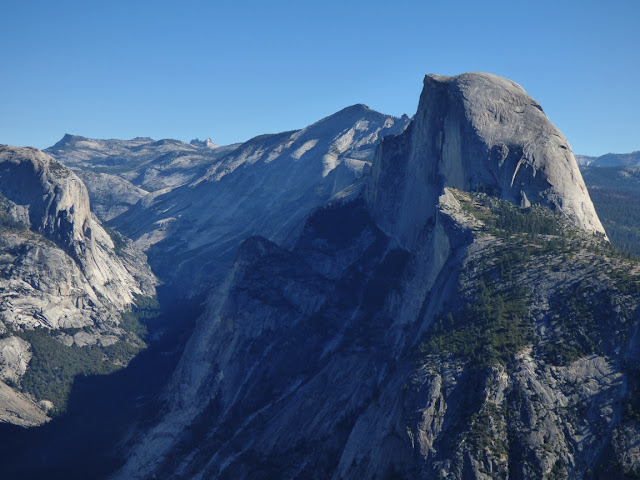 Glacier Point on the rim of Yosemite Valley is hands-down one of the most spectacular places one can stand in the world. There's just no place like it. And it's noisy. It's crowded. There is a busy and often full parking lot. And despite that, it is worth putting up with, because there just aren't that many places where you can look straight down for 3,000 feet, and at the same time see the iconic rocks of the upper valley from a unique angle. 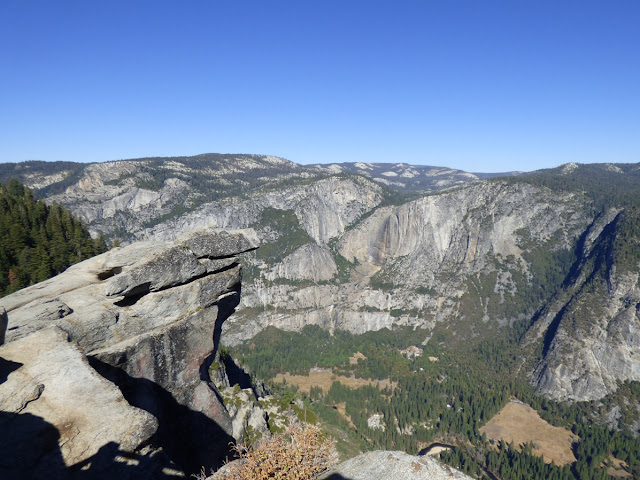 It takes a little effort to get there. One has to drive about 25 miles from the floor of Yosemite Valley up a narrow winding road. One has to wade through the crowds to get the edge of the precipice. But no matter how many times I've stood there, I can never fail to be in awe that such places exist. In one sweeping view one can see the north valley wall from the vicinity of the Three Brothers and Yosemite Falls, past Yosemite Point, on to North Dome and Basket Dome, across the deep trough of Tenaya Canyon to Half Dome. And below your feet there is the floor of Yosemite Valley, the meadows, the forests, the parking areas, the resorts, all from a nearly vertical perch at 3,200 feet (980 m). 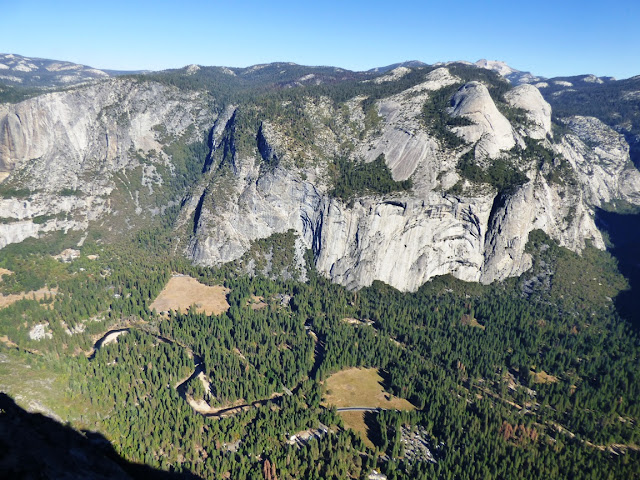 It's from a high point like this one that I can best appreciate the work of the glaciers that altered a narrow river-carved canyon into the wide, flat floor we see today. The earliest glaciers filled the valley to the rim (the Pre-Tahoe stage around 800,000 years ago), while the later advances only filled the valley to one-third or so of the total depth (the Tahoe stage at 130,000-65,000 years, and the Tioga stage from 20,000 to 13,000 years ago). The domes, like North Dome, Basket Dome and Half Dome, rose above the ice at all times. Their rounded shapes are the result of exfoliation, the tendency of slabs to break off the edges and corners of solid monoliths of granitic rock as erosion took weight off the surface of the rock. Glaciers helped excavate the rock from the jointed face of Half Dome, but never overtopped the gigantic rock. 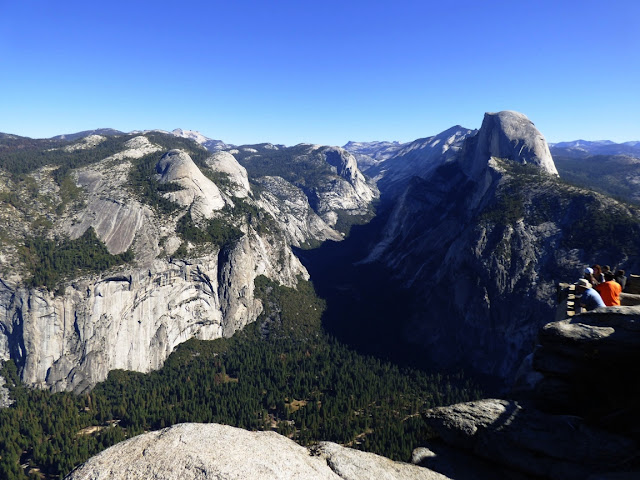 One might think that a view like this is unchanging on a human time scale, but that's not exactly true. It's a little tricky to see it in the shadows, but look at the whitish exposure of granite to the left of Half Dome in the picture above. That scar didn't exist prior to 2009. Every visitor prior to March of that year saw something different. The Ahwiyah slide involved thousands of tons of rock that fell 1,800 feet to the floor of Tenaya Canyon. The resulting explosion of rock destroyed hundreds of trees on the valley floor. To see some before and after pictures, click here for a look.

Our class finished at Glacier Point and headed back the vehicles, but we weren't done with standing in dramatic places. That will be in the next post!
Posted by Garry Hayes at 12:36 AM

I always made sure to take my passengers up to Glacier Point, assuming it was open, and all I told them beforehand was that they were about to realize how small and insignificant they really are.

The beauties of Yosemite are hard to match anywhere in the world. I enjoyed seeing it again through your eyes.

Once, almost 30 years ago, I cross-country skied from Badger Pass to Glacier Point, and spent the night. There were four of us: the splendid guide (required for overnight stays back then), a couple from New England, and me. Of course it was unforgettable. Imagine being one of just four people at Glacier Point! We fell asleep to the sound of ice crashing off the falls... Facilities are much nicer now (with indoor plumbing!), and for anyone in remotely decent shape, I can't recommend this trip highly enough. Here's a link: Ski Hut at Glacier Point.