As we drift into the last day of Summer (and it's certainly holding on around here, 100 degrees a day ago), I started looking over some of my adventures. There was our Vagabonding on Dangerous Ground in the Pacific Northwest, of course, but I also spent around four weeks exploring the Southwest, and saw incredible things and places. One of those places was Natural Bridges National Monument in Utah, and one of the things was my first hike to the second largest bridge in the United States (and probably the 7th or 10th largest in the world, depending on the strict difference between "natural bridge" and "arch"). Rainbow Bridge in Arizona is the only one that is larger. Number two is in the picture above...can you see it? It doesn't look all that big, does it? 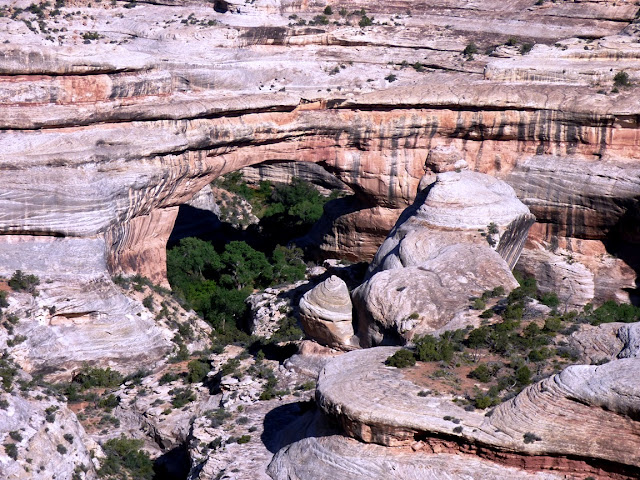 It's called Sipapu Bridge, and it is one of three spectacular bridges in the monument. How big is it? A sense of scale is everything here. Zooming in a bit, one can notice some trees growing in the opening beneath the bridge. 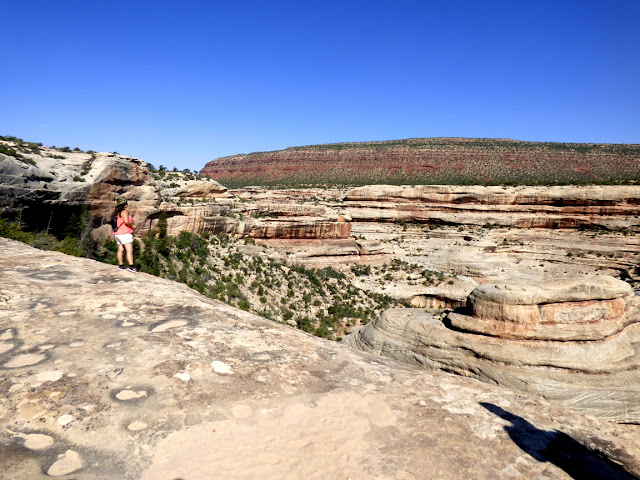 It's best to see it up close. A trail, said to be 0.6 miles long (I'm skeptical; it felt longer, especially coming back up), climbs down the cliffs to the canyon bottom near the bridge. 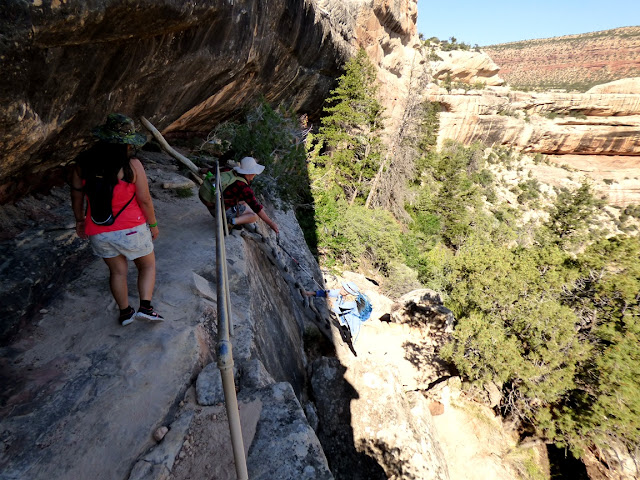 The pathway isn't a gentle slope. There are stairways, and ladders are used to surmount some of the short cliffs. Acrophobic people need not apply. 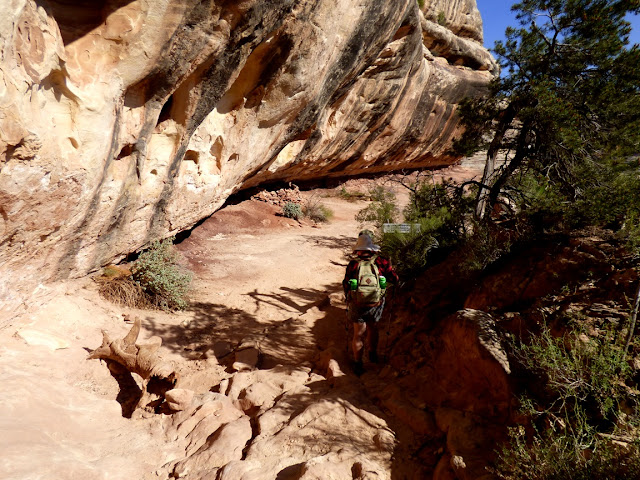 Midway down the canyon, some Ancestral Puebloan ruins provide a brief distraction. The small room above was probably a granary where seeds were stored. The ledge with the ruin offers a nice view of the bridge if you don't feel like going farther down (the bridge has gotten LOTS bigger, and the trail looks MUCH steeper!). I sometimes think the Pueblo people had a nice sense of location. 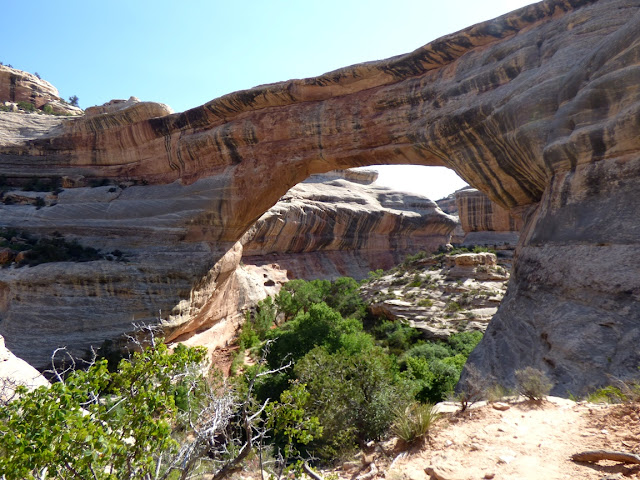 Those trees we saw under the bridge earlier? It's becoming apparent that we were looking at large mature Cottonwood trees. This opening is huge. 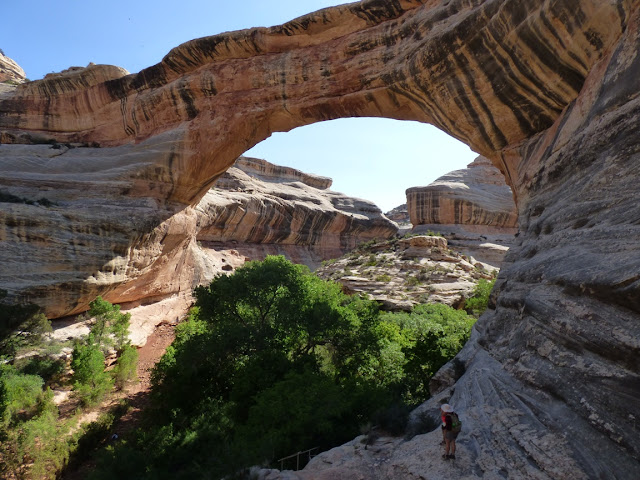 The trail winds down to the base of the bridge, and the span has become otherworldly. Although precise measurements differ a little, the official height of the opening is 220 feet (67 meters), and the width is 268 feet (82 meters). The width at the narrowest point on the bridge is 31 feet (9.5 meters). I'd never seen anything quite like it. 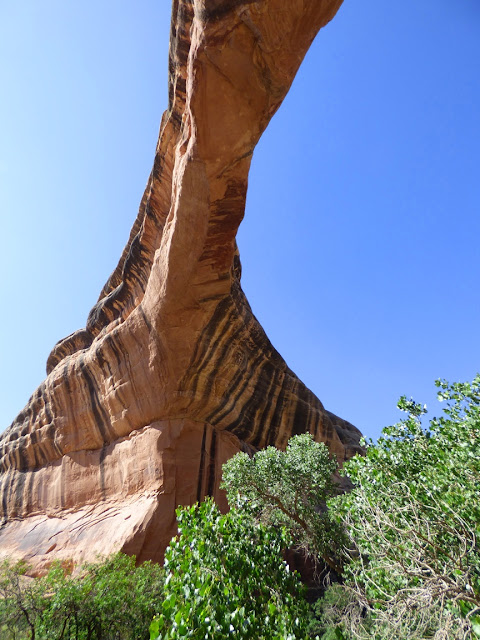 Natural bridges and arches are similar in ultimate appearance because openings in rock are subject to the same physical forces, but the origins of each are different. Bridges form from the direct effect of water erosion as a stream impinges against a narrow ridge where a river loops completely around (meander necks). Arches can result from the erosion and exposure of underground caverns, or from the undercutting of a narrow "fin" or wall of sandstone.

Sipapu Bridge to me was stunning. I've been to Natural Bridges many times in the past, but we've always taken the shorter trail to the very scenic, but much smaller, Owachomo Bridge (span 180 feet /55 meters, with a height of 106 feet/32 meters). This bridge was something else entirely. So was the hike out, a climb of 600 feet in just over a half mile. It was worth every step! 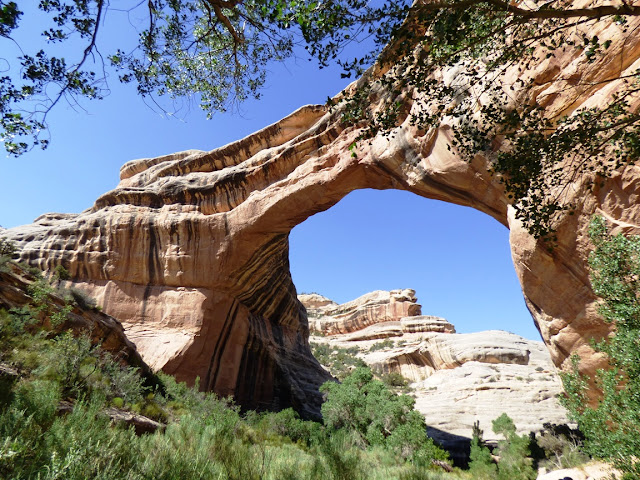 Here is a way to see Rainbow Bridge....

It would be nice to have a follow-up post on the mechanism for the streaking on the rocks.