Vagabonding on Dangerous Ground: Playing Hide and Seek with a Sleeping Monster

There's something about traveling through the Pacific Northwest that I may never become accustomed too: the deep, deep forests. As a child in the scouts, living in arid Southern California, I was pretty good at orienteering with a compass and map, but that was predicated on the fact that I could see the mountains around me. That would have been tougher if I had grown up in a rainforest. Every view is of a tree! 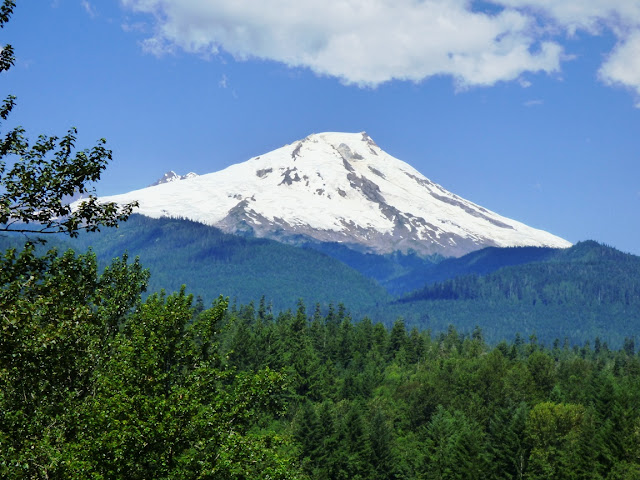 And so the struggle to actually see Mt. Baker in the Cascade Range. We had actually traveled around three sides of the mountain in the last two days, but I never got much of a glimpse, either because of the deep forest, or, you know, having to pilot the car without plowing into a tree or a deer. We finally got serious about the effort by detouring onto Baker River Road as we left North Cascades National Park. The road would take us within six miles of the summit as the crow flies. If we couldn't see it from there, we didn't deserve to see it. 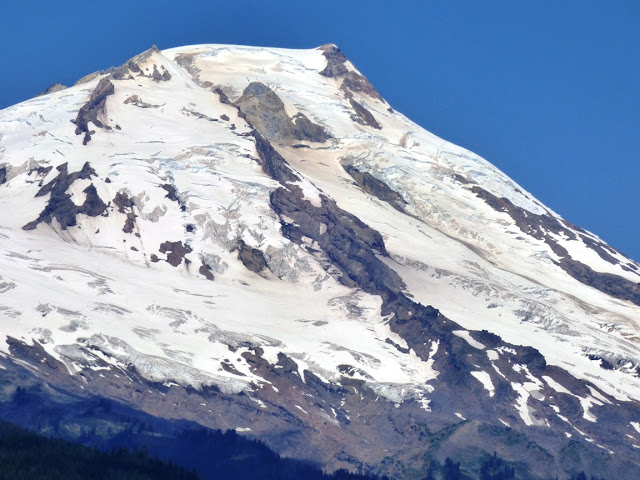 This web series was entitled Vagabonding on Dangerous Ground primarily because we happened to be following the coastal parts of the Cascadia Subduction Zone which had become newsworthy over the summer because of a New Yorker article detailing the probable damage from an expect magnitude 9 earthquake offshore. Shaking, tsunamis, landslides, power disruptions and many other frightening events were part of the article. Kind of lost in the whole media affair were the sleeping giants that have always been a visceral threat to those who live in the region: the volcanoes.

In Cascadia the subducting slab of cold oceanic crust and underlying solid mantle material (the lithosphere) are driven into the much hotter asthenosphere, a "mushy" layer in the mantle that is partly molten. The interaction of the slab, water from the oceans, and the hot mantle rocks causes melting of some of the continental crust, forming magma that rises through the crust as a series of plutons. When they cool before reaching the surface, they will form visibly crystalline rocks like granite or diorite. When they reach the surface in a molten state, magma mayhem ensues. 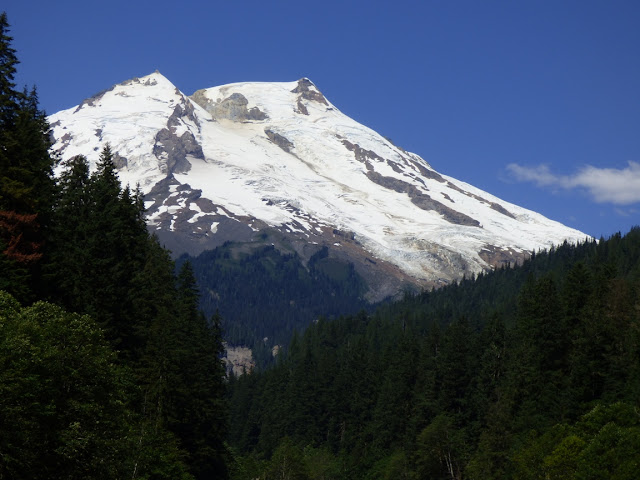 The molten flows of lava that Hollywood seems to love the best are often the least serious problem during an eruption of a Cascade volcano, if they occur at all. More often any lava flows will melt prodigious amounts of snow and ice, producing volcanic mudflows (lahars) that can flow for tens of miles, causing damage at great distances from cone. In ancient times lahars could strike without warning from an eruption that couldn't be seen from within distant downstream canyons.

Some lahars aren't even associated with volcanic eruptions. They can be triggered by landslides on the upper reaches of the steep cones, or by unusually high amounts of glacial melting (water trapped under the glacier may burst out all at once). Mt. Baker has the most snow and ice of any Cascades volcano except Mt. Rainier (and that's a big except, as Rainier has about 50% of all the ice in the lower 48 states). So lahars are the big danger from Mt. Baker. 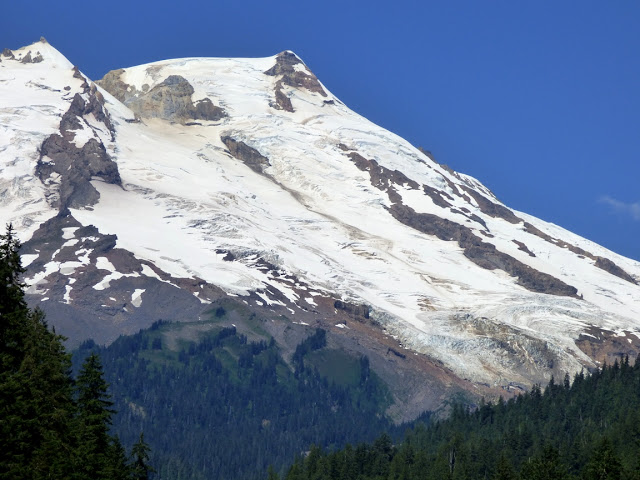 The other dangers result from explosive eruptions that pulverize the magma and other rocks around the summit of the volcano. The fine dust that results is called volcanic ash. The ash can be so hot close to the volcano that it can be incandescent. Anyone or anything caught in the fast moving ash flows is doomed, plain and simple. An ash eruption hit the Martinique town of St. Pierre in 1902 and killed all but two of the town's 30,000 inhabitants. These hot ash flows are called pyroclastic flows, or nuée ardente, French for "fiery cloud". The good news in the case of Mt. Baker is that relatively few developments are close enough to the peak to be threatened. But there are some.

We found great views of the volcano from the dam at Baker Lake, and from Boulder Creek. Boulder Creek also provided a nice view of some lahar deposits as well, possibly from events in 1843 or 1891.

Mt. Baker is one of the youngest of the Cascade volcanoes, having formed mostly in just the last 30,000 years. The last major eruptions took place around 6,600 years ago when large lahars swept down creek valley accompanied soon after by ash eruptions. The 1843 eruption was caused by a hydrovolcanic explosion (groundwater flashing to steam). That event left behind Sherman Crater. In 1975, there was a vast increase in the amount of thermal energy around the summit of the mountain, raising fears of an eruption. The heat subsided somewhat, and everyone forgot about Mt. Baker when Mt. St. Helens exploded just five years later.
We were seriously on the homeward path now. No meandering highways along beautiful coastlines for us anymore. Interstate 5 was going to be our pathway now as we pushed south. But the Cascadia Subduction Zone had one more beautiful surprise for us. We'll wrap up our journey in the final post soon!
Posted by Garry Hayes at 9:33 PM

I can't wrap my head around the statement "Rainier has about 50% of all the ice in the lower 48 states." How can that be? I understand it's a tall volcano but surely there must be other reserves of glacial ice in the rockies and Mt Shasta. Half is on one mountain?

It's a case of something I read when I researched my field course last year and I can't remember the source. However, a quick search shows a USGS paper that estimates Rainier's ice volume at 991 million cubic feet, or about a cubic mile or so (mixing sources here...). Hood as 145 million, Three Sisters 89 million, and Shasta 74 million. Add in Baker and Jefferson and the others and one still doesn't come close to Rainier. Rainier just towers over all the other Cascade volcanoes, except for Shasta, and Shasta is far to the south in a more arid environment. The glaciers of Glacier, the Rockies, and the Sierra are very small in relation as well. The number seems reasonable to me, as crazy as it sounds.