A Bird Shangri-La No More: The Moas of New Zealand 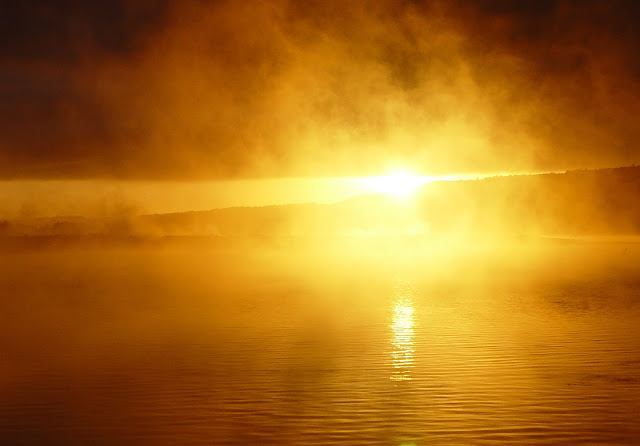 Blogging always involves a little bit of free association, where inspiration comes from numerous unrelated events over the course of a few days. I've started my fall semester, and I've met 170 new people over the last week. I've given introductory presentations that describe the reasons a person might want to pursue studies in geology and the earth sciences including a rundown of some of the interesting fossils that have been found in the region. So, I've been thinking about the past, the very deep past of millions of years ago.

Then, I've been blogging over at Geotripper's California Birds about some birding adventures overseas including trips in Switzerland, Italy, and Australia. While looking for bird pics, I came across the picture below of some Moa replicas that we saw at a New Zealand wildlife park. Replicas, because Moas no longer exist in our world. But once there was a Shangri-La for the birds, a paradise on Earth, in New Zealand.
New Zealand was a paradise for birds because the island mass separated from other continents prior to the mass extinctions of the late Cretaceous. Small mammals were present, but on the islands they were never much of a threat to the birds, and eventually they went extinct, except for some bat species. With the loss of the dinosaurs and the mammals, the only vertebrates in position to dominate the terrestrial ecosystems were the, uh, dinosaurs. The avian dinosaurs. With no reptilian or mammalian predators, the birds were able to evolve a flightless lifestyle (flight is an expensive energy proposition if it is not necessary for survival). Eventually a number of very large birds evolved, including eleven species of Moas. The largest stood over 12 feet tall (3.6 meters). The Moas were mainly plant-eaters but predators existed on the islands as well, including the extremely large Haast's Eagle (Harpagornis moorei) with a wingspan of nearly 10 feet (3.3 meters).
The trees on the island provide another link to the past. Some of the huge tree ferns in New Zealand evoke Jurassic forests of the long-sundered Gondwana supercontinent. The ferns in the photo below line the opening of a 75-foot deep explosion pit at Orakei Korako Geothermal Area on the North Island. I've never such huge ferns before. 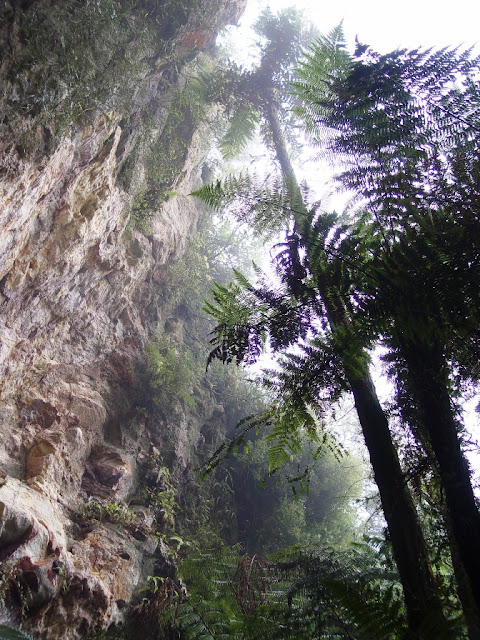 The ancient tree that captured my imagination the most was the Kauri tree (below), one of the bulkiest trees on the planet, rivaling even the Sequoia trees in my own backyard of the Sierra Nevada. The most mature trees are not quite 200 feet high, but their trunks remain thick practically to the crown. Their history extends back into Jurassic time. They once covered large portions of the islands, but unfortunately their wood is strong, mostly knot-free, and attractive. Something like 95% of the original forests have been cut down, and old-growth forests are exceedingly rare and precious. The trees are now protected by law, but ironically, dead trees in swamps are not, and the wood is durable enough that some of the trees from the swamps are still utilized legally, despite having been dead for hundreds or thousands of years. 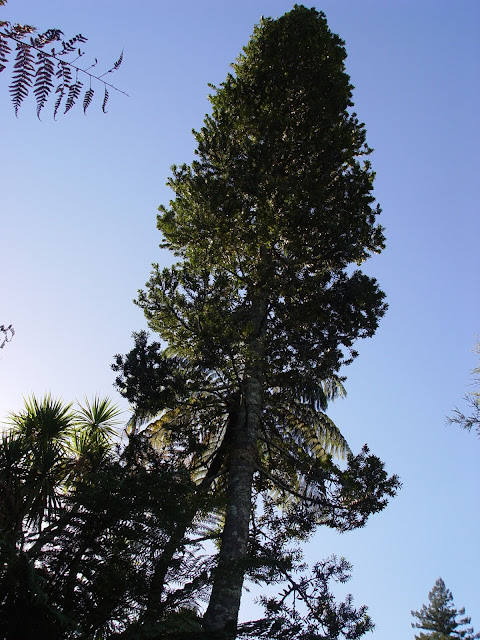 Unfortunately, the arrival of humans on the islands around 700 years ago spelled doom for the avain Shangri-La. Slow-moving, with no defensive instincts, they were hunted to extinction in just a few decades after the human invasion. When they were gone the large raptors lost their primary food source and went extinct as well. Of the flightless birds, only a few species of the Kiwi, the threatened small forest dwelling bird, survives today.
Geology and paleontology are disciplines for creative and imaginative people. They recreate for us past worlds full of strange and wondrous creatures that are long gone from today's world. There are enough samples of DNA from the extinct Moas that there is a slight hope of bringing them back as living species, but that's probably a long time in the future, if ever. We must live instead with their echoes and the cultural memories and stories of the descendants of the people who once lived among them.

Note: cross-posted on my bird blog at http://geotripperbirds.blogspot.com/
Posted by Garry Hayes at 12:26 AM