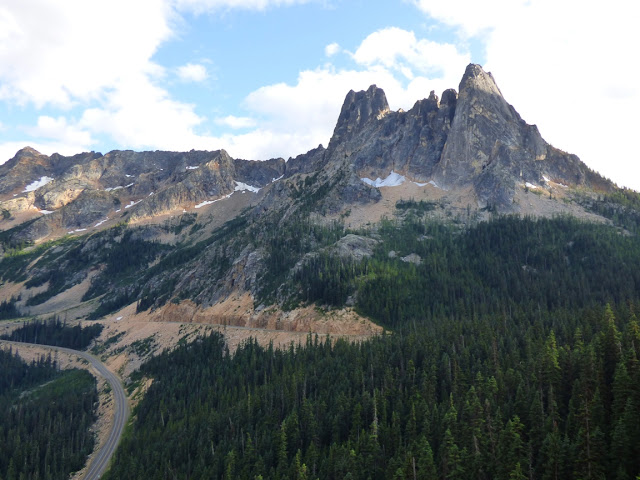 Our vagabonding trip through the geologically hazardous territories influenced by the Cascadia Subduction Zone was mostly an unrushed affair as we meandered up the Pacific Coast through Northern California, Oregon, Washington and British Columbia. Towards the end, though, were realized we had spent most of our summer on the road and certain duties needed attention before the start of the school year (you know, that whole "writing syllabi, ordering textbooks, and cleaning the lab" kind of thing). So our last few days were very short explorations of some very beautiful places that I must return to as soon as possible. One of those places was the North Cascades National Park Complex (the park itself and two adjacent National Recreation Areas). 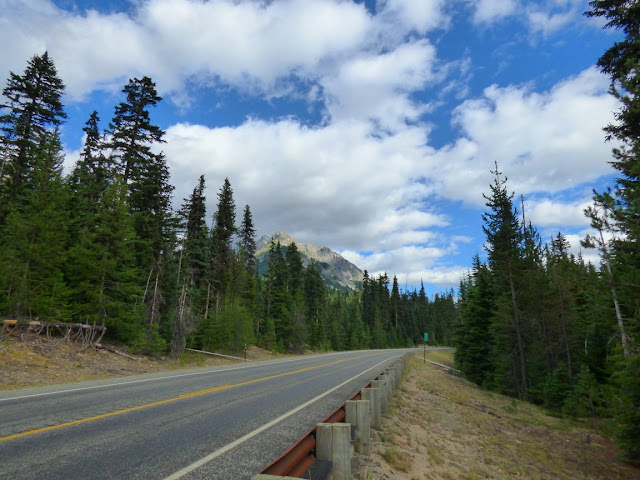 Our brief drive included a look at the "gorgeous" Skagit River Gorge and the large hydroelectric dams that utilize the high gradient river to produce a fifth of Seattle's electricity. We took advantage of the extended late-afternoon light to explore a little farther up Highway 20, which took us east of the national park. We had trouble telling the difference...it was just spectacular. We drove to the first summit at Rainy Pass, and saw there was another pass just a few miles way, so we went there too. 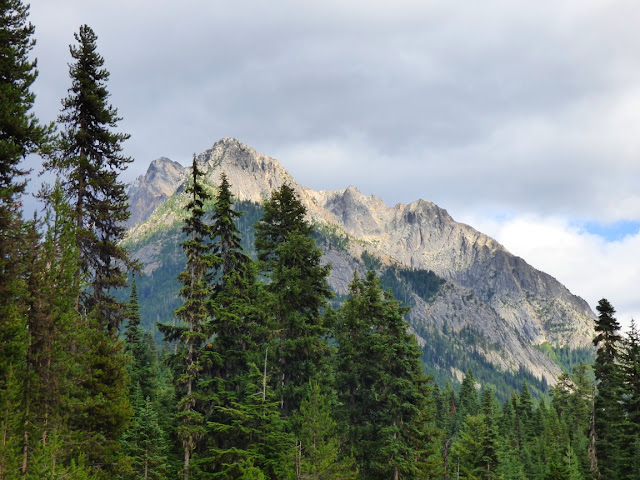 Washington Pass (elevation 5477 ft./1669 m) was truly stunning, especially for a person like me. I've traveled a lot, but often visit the same places over and over, with students along. I enjoy the looks on their faces when they see something they've never seen before, but I don't get that thrill of "the first time" all that often. I got it here! 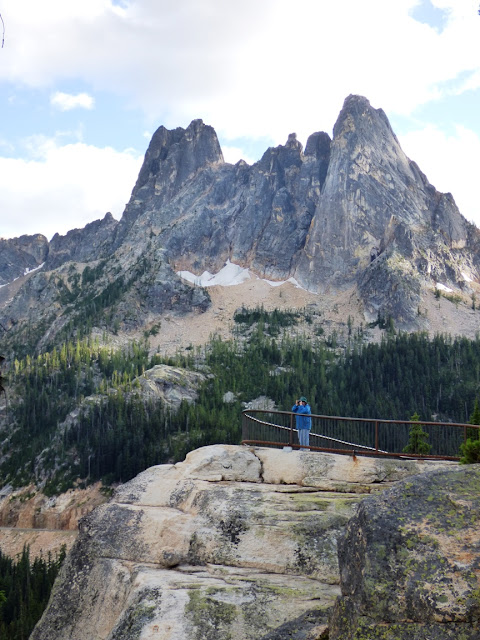 A short trail led to an overlook of the Liberty Bell and Early Winter Spires, a group of highly jointed granitic towers. There are popular climbing routes among the cliffs. The rocks are part of the Golden Horn batholith, an intrusion of granite dating to 48 million years ago. 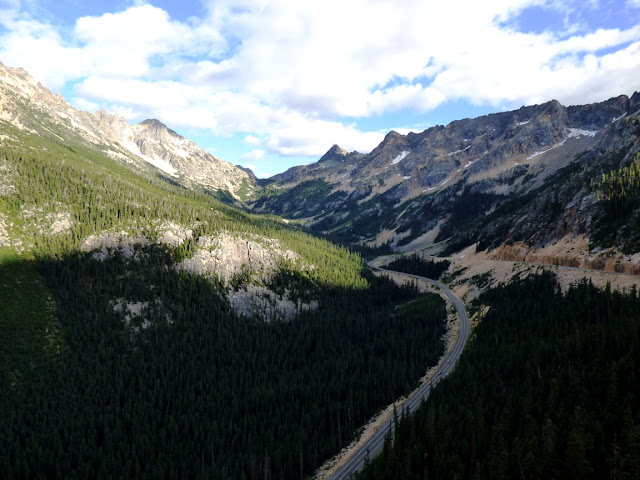 Looking south we could see Kangaroo Pass. The rocks on the right side of the pass are part of another intrusion, the much older Black Peak tonalite. It dates to around 90 million years ago. The bowl at the head of the valley is an example of a cirque, the origin point for the glacier that flowed down Early Winter Creek during the ice ages. 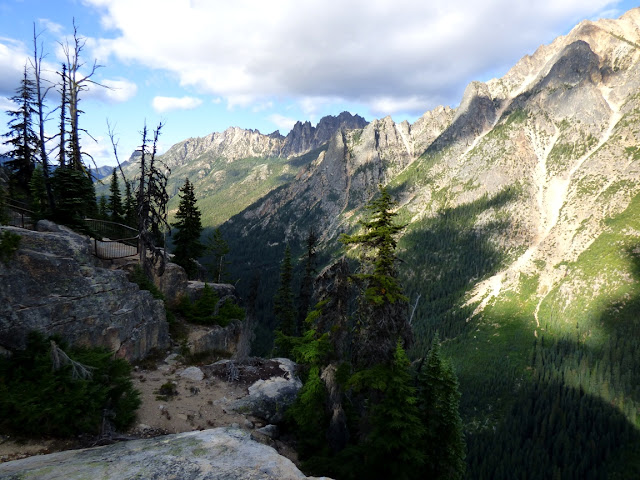 The prominent peak in the center of picture above is Silver Star Mountain, with Vasiliki Ridge to the left, and Kangaroo Ridge to the right. The entire ridge is composed of the Golden Horn granite. One might wonder why this glacial valley of granite doesn't display domes like those of Yosemite. It's the joints. They are too closely spaced for exfoliation and dome formation to take place. It gives the entire region a sense of extreme ruggedness, and indeed the highway itself was not completed until 1972, after decades of seeking workable routes over the North Cascades. 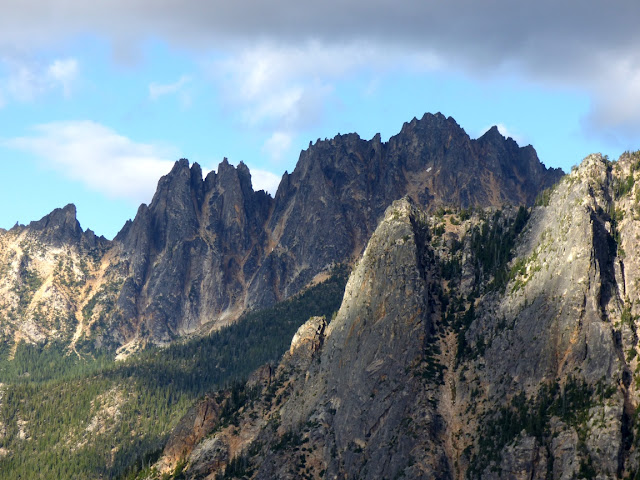 The road descends north through the glacial U-shaped valley of Early Winter Creek.  We didn't have time. We turned back and headed down to camp in the Skagit Gorge in the setting sun. 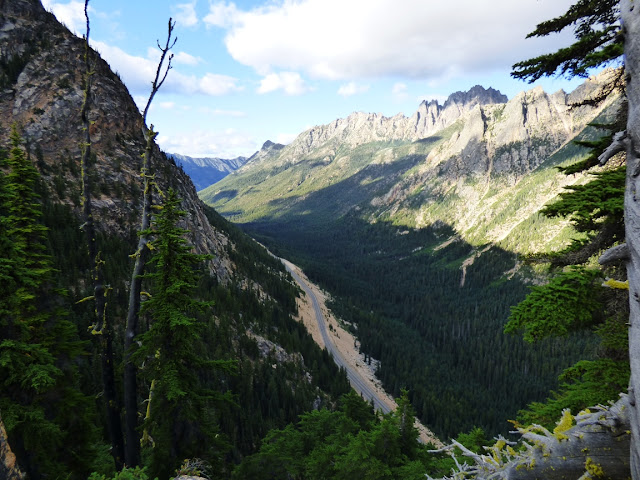 There was one more "never-before-seen-by-me" mountain in the area. We'd be looking for it the following morning. 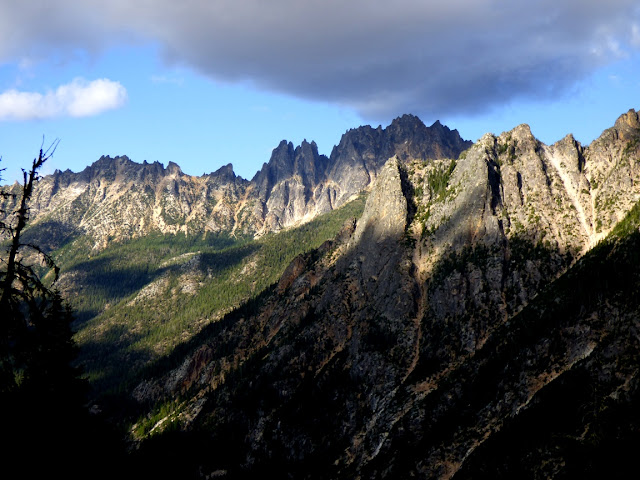