Can You See It? Seeking a Natural World in an Urban Setting 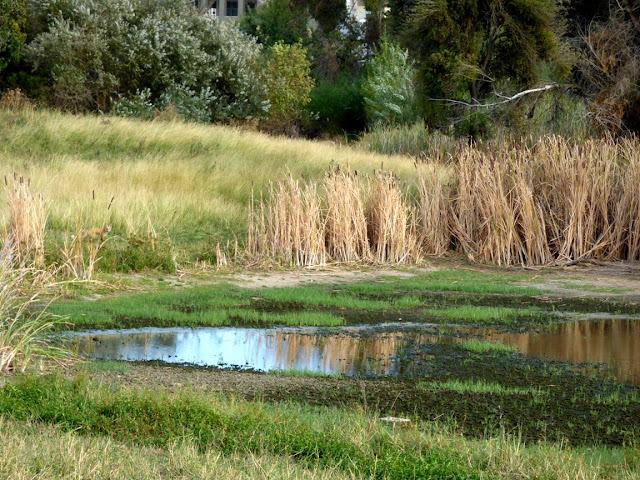 Can you see it? Look carefully, it's easy to miss...

We have a drainage pond on our west campus at the edge of town. It's been a mostly neglected corner of the campus, used occasionally to graze sheep from our agricultural unit. I've been exploring it for the last two years looking to photograph birds (forty species and counting). It's not far from our Science Community Center and Great Valley Museum. The museum and science teaching facility are new, and have garnered a great deal of community interest, with a planetarium, observatory, Science on a Sphere, and all kinds of science-related exhibits. The final jewel in the crown, an outdoor education laboratory, was sort of a political football in the last year or two as the bond issue that paid for these incredible educational facilities started to run short.

Luckily, there is funding in place to build the outdoor lab, with plans in place to plant native vegetation and habitat for animals that could thrive there. The California Drought, about to enter a fifth year, put the kibosh on what was to be a central attraction, a pond. No new water features, they said.

We're going to let nature decide that issue for us. We will be designing an artificial vernal pool, a habitat almost unique to our valley. Such pools only hold water after storms in the winter and spring, and give rise to a number of endemic plants and animals. In the meantime, our attention shifted to the drainage pond. It's been there since World War II and has evolved into a natural habitat, sort of a mini-wilderness on the edge of our campus. Since we can't make new ponds, we are going to make improvements to the old one, putting in walkways, and adding a platform that students and visitors can use to take water samples and observe wildlife.

It's always a thrill to see a bit of wildness in the middle of an urban environment. That's what the picture above is about. I had my own thrill of discovery as I was taking an evening walk before class. If you look at the left side of the picture, you'll see a bit of nature staring back at me. 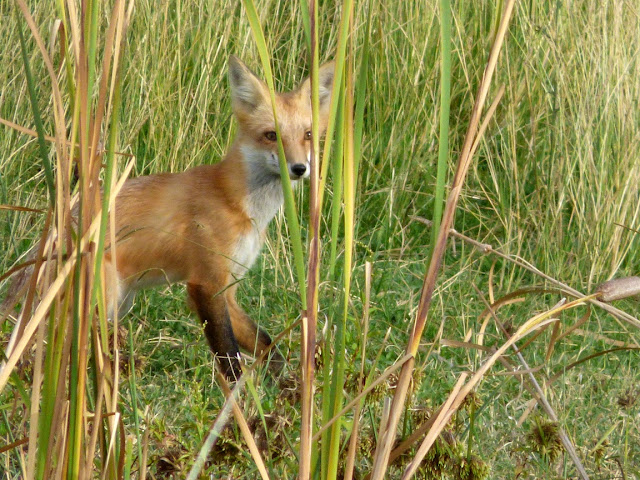 I've seen this beautiful fox (or a parent or sibling) on just one other occasion. It's been said it was living in one of the abandoned buildings nearby, although there seems plenty of shelter in the pond area. It was comforting to know that a bit of wildness still exists nearby. The children in our region need to know that they are part of a larger environment, and it's wonderful that they just might have a chance to see a creature such as this. It might be something else, squirrels, muskrats, turtles or birds, but it will be something. I'm looking forward to the future on this campus! 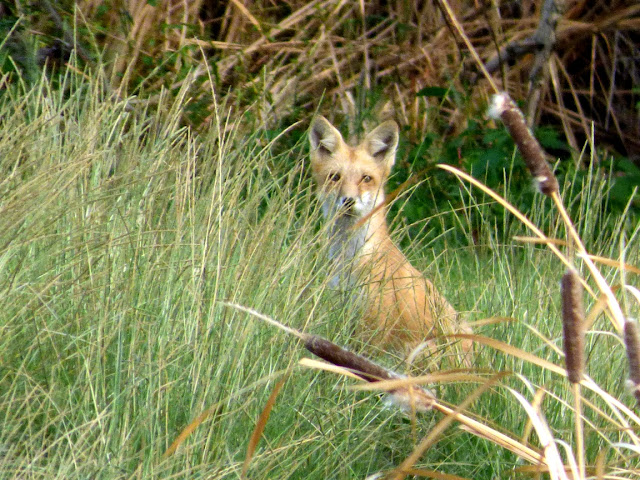 Postscript: As cute as they are, the Red Foxes are not native to California. There is a threatened subspecies, the Sierra Red Fox, that lives in the higher parts of the Sierra Nevada and the Cascade Range. All others across the state were introduced more than a century ago and have proved a problem in many ecosystems, as they eat just about anything and adapt easily to new environments at the expense of native species. I don't know what role they play in our area, or if they are a problem. My feeling is that they help control rodent populations on the campus, but I'm no biologist!
Posted by Garry Hayes at 6:15 PM

Neat! I a big fan of red foxes. They're so fun to see, especially the young ones. They were common around here until a few years ago when supposedly a distemper epidemic wiped them out. Now we have a plague of cottontails in town! I hope the foxes return. But should we consider them native? ... they've only been here since the Wisconsin glaciation ;-)

From my quick research, the Red Foxes are native to most parts of North America, but except for the Sierra Nevada subspecies, they are not native to California (although we have native Kit Foxes and Gray Foxes).

Kit Fox are good at hiding, but evidence of them can be found. In one spot in Bakersfield I visited, there were Kit Fox burrows in a road fill along the edge of a park, in the middle of a ground squirrel colony - easy spot for both of them to dig, and fast food! They have also been known to den up in small road drainage culverts (ready-made hole, thank you!) causing some consternation and complication when cleanout time comes up.

For the vernal pools - creation of them is fairly standard (though not always successful) mitigation these days. It was done by developers in several places near me in eastern Sacramento, and even Caltrans has a record of doing it (and did some of the early research and testing). Should be plenty of reading material to consult. Much better to locate protect them when building, but that's not always possible.