Out in America's Never Never: A Tale of Two Towers (and a few more)

America's Never Never is full of strange and wonderful sights. We had left the forested Black Mesa and its rather depressing strip mines and headed east to the village of Kayenta on the Navajo Reservation, then turned north towards Utah. We had dropped several thousand feet and were traveling through a more barren landscape (the barrenness exacerbated by the ongoing drought).

Now, before I go much farther, I need to talk about childhood cartoons. I surely date myself severely when I note that my favorites were the Looney Tunes, especially Bugs Bunny, but there was a special place in my heart for Wile E. Coyote and that nefarious arrogant Roadrunner.  I had been to places like Joshua Tree National Park and the Mojave Desert, so I knew that no desert really looked at all like those cliffs and spires that Wile E. was always falling off of.

At least not until I reached the Navajo Country around Kayenta and Monument Valley. Suddenly I was standing not only in a Roadrunner cartoon, but John Wayne would be riding up any moment in a stagecoach. There really were towering spires in the desert!

I was pretty lucky in that my parents were the ones who originally introduced me to this country on our family vacations. I learned about these deserts in my childhood, but I was left with a lot of questions not readily answered. It wasn't until I became a geologist that I fully appreciated the processes and history that produced these incredible landscapes. And I've been bringing my students here ever since to show them that deserts aren't just cacti and sand dunes.
There are different kinds of "towers" in Navajo country produced by quite different processes. There is a great spot on Highway 163 about ten miles north of Kayenta to compare the two. To the east is Agathla Peak (or "El Capitan") standing some 1,300 feet over the highway (above). To the west stands Owl Rock (below).

Agathla is one of the more spectacular examples in the Navajo country of a volcanic neck or diatreme, the core of a deeply eroded volcano. Although the towering spire appears dark it is mostly composed of large chunks of sandstone that collapsed into the interior of the volcano after a violent explosive eruption. One can see dark dikes of basaltic-looking volcanic material; the rock is called minette, which is a relatively rare potassium-rich volcanic rock. The network of dikes protected the core of the volcano while the remainder was eroded away. The intrusion is just one of dozens covering an area of around 20,000 square kilometers around Four Corners called the Navajo Volcanic Field. Shiprock is perhaps the most familiar of these features. 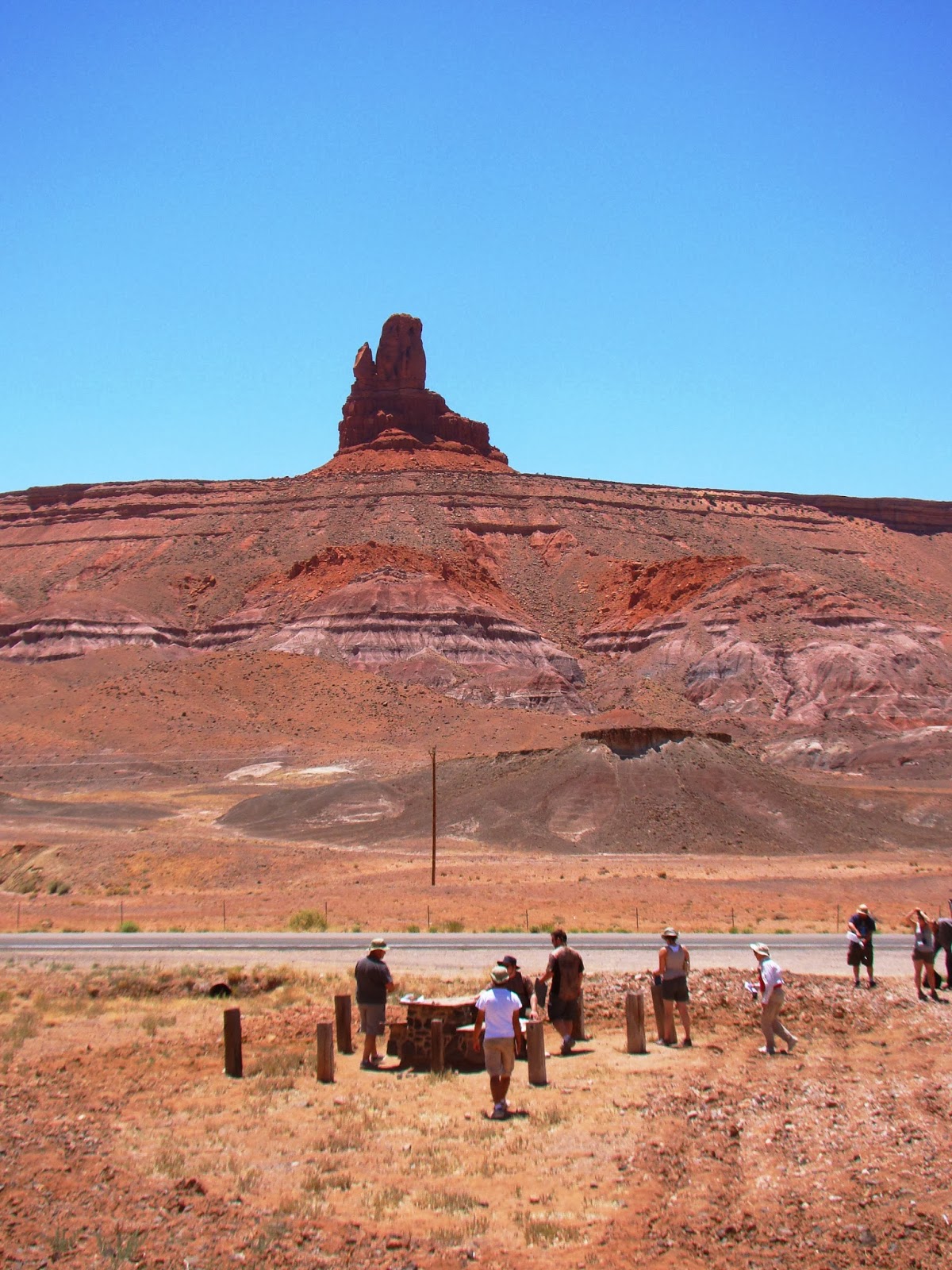 Owl Rock, the tower on the other side of the highway,  is quite different. It is clearly layered, and the layers are horizontal. It is an erosional outlier of the same sequence of sandstone, siltstone and shale that can be found in many of the cliffs throughout the region. Sedimentary rocks are not known for producing towers and spires under "normal" conditions (read "characteristically humid conditions where most people live"). In the dry desert environment of the Colorado Plateau, resistant rocks such as lava flows or in this case quartz sandstone will form a protective cap that generally prevents the otherwise rapid erosion of the softer underlying sediments.

The tower is composed of Triassic and Jurassic-aged rocks of the Kayenta and Navajo Sandstone formations. Beneath the tower are the siltstone and clays of the Triassic Chinle Formation (or Group). The Chinle was laid down in floodplains and lakes in the earliest years of the dinosaurs. Distant volcanic eruptions (some near my own Sierra Nevada) laid down ash deposits that have oxidized into colorful red, brown, yellow, and lavender clay-rich strata. Some of the ash layers are famous for their petrified logs, most notably at Petrified Forest National Park in Arizona. We have seen logs in the vicinity of Agathla Peak and Owl Rock as well. 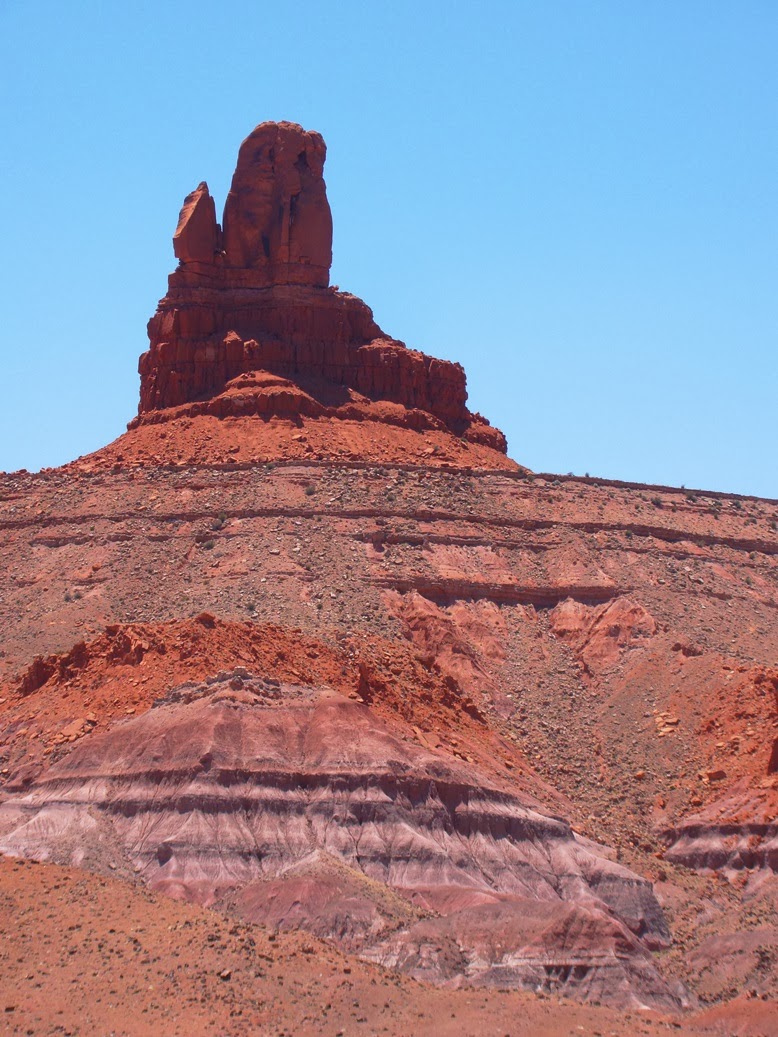 But what about the cliffs? How did they form?

The Navajo Sandstone is a solid rock but when it is stressed by regional deformation it tends to develop vertical fractures called joints. The Navajo may prevent the rapid erosion of the underlying shale layers, but the rocks do eventually get eaten away, undercutting the sandstone. The rock falls away along the joints in a process called cliff retreat. In this way a plateau shrinks to become a mesa, a mesa becomes a butte, and eventually only a spire remains.

It turns out that Owl Rock is simply a foreshadowing of the incredible sights ahead. As we passed into Utah we reached Monument Valley, a place where cliff retreat has produced a spectacular array of mesas, buttes and spires. The formations are different because we have crossed onto a deformed section of crust called the Monument Upwarp. We have reached rocks that are late Paleozoic in age (Permian), between around 250-300 million years. 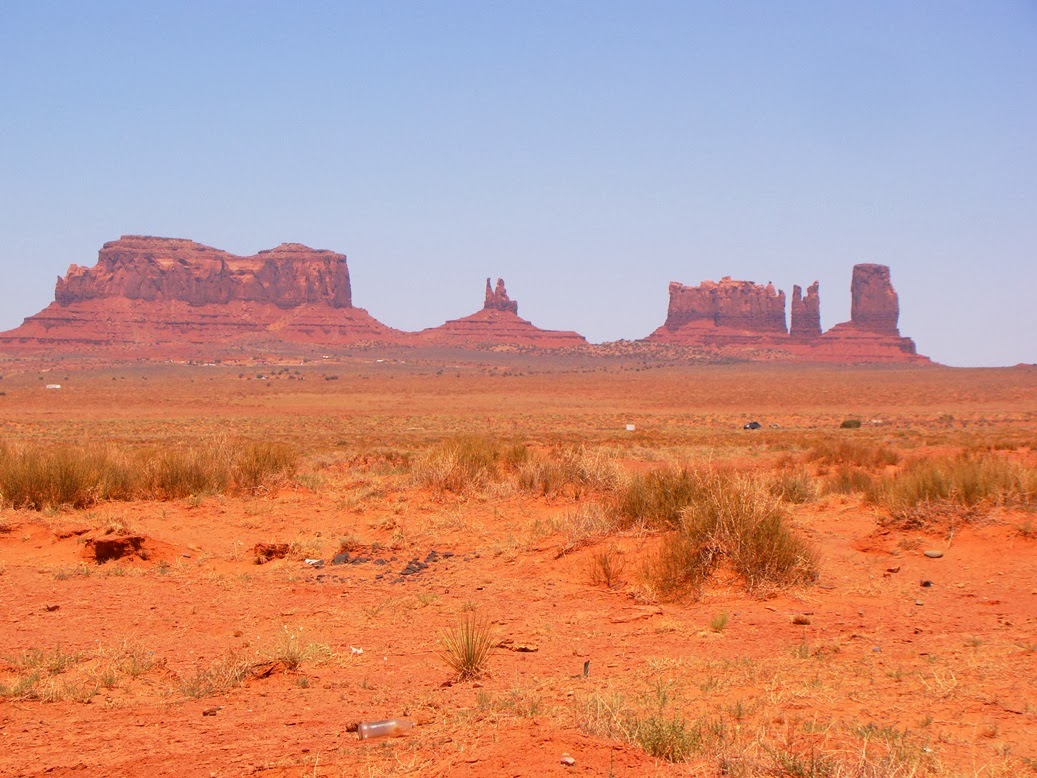 At Monument Valley, the vertical sandstone cliffs are composed of the DeChelly Sandstone. A thin layer called the Shinarump Member of the Chinle Formation forms the top layer of many of the spires and buttes. The gentler slopes below the cliffs are the finer sediments of the Organ Rock Shale. The Permian Period was a time of reptiles, but not dinosaurs. The terrestrial environments were dominated by a group called the Therapsids, or "Mammal-like" Reptiles. These animals had a more vertical stance that distinguished them from the sprawling gait of other reptiles, and a number of other features that are mammalian in nature, including differentiated teeth. They gave rise to the mammals in Triassic time. The region has yielded up a number of specimens.

Monument Valley is a tribal park administered by the Navajo people. Many people (who don't know who John Wayne was) will know the place as the spot where Forrest Gump decided to stop running across America ("What are we supposed to do now?"). 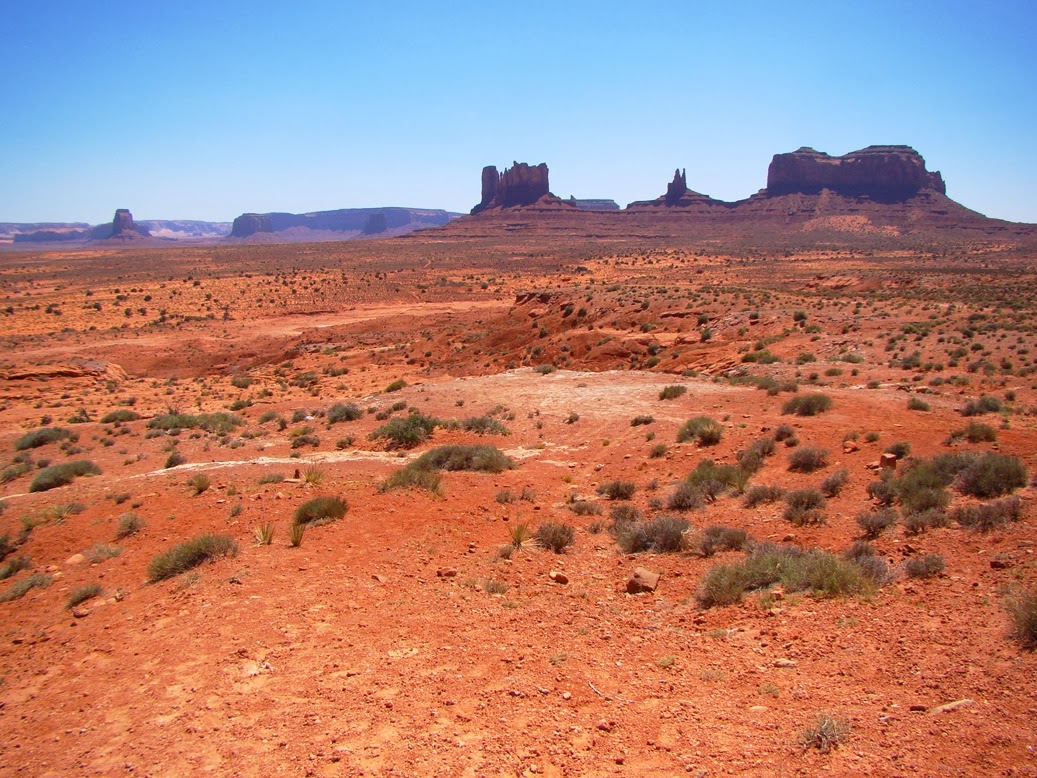 We had a lecture at the overlook and headed up the highway to a sight that was an absolute first for me, the Valley of the Gods. More on that in the next post!
Posted by Garry Hayes at 9:00 PM