Out in America's Never Never: A Corner of the Navajo Nation Where the Ancient Ones Dwelt 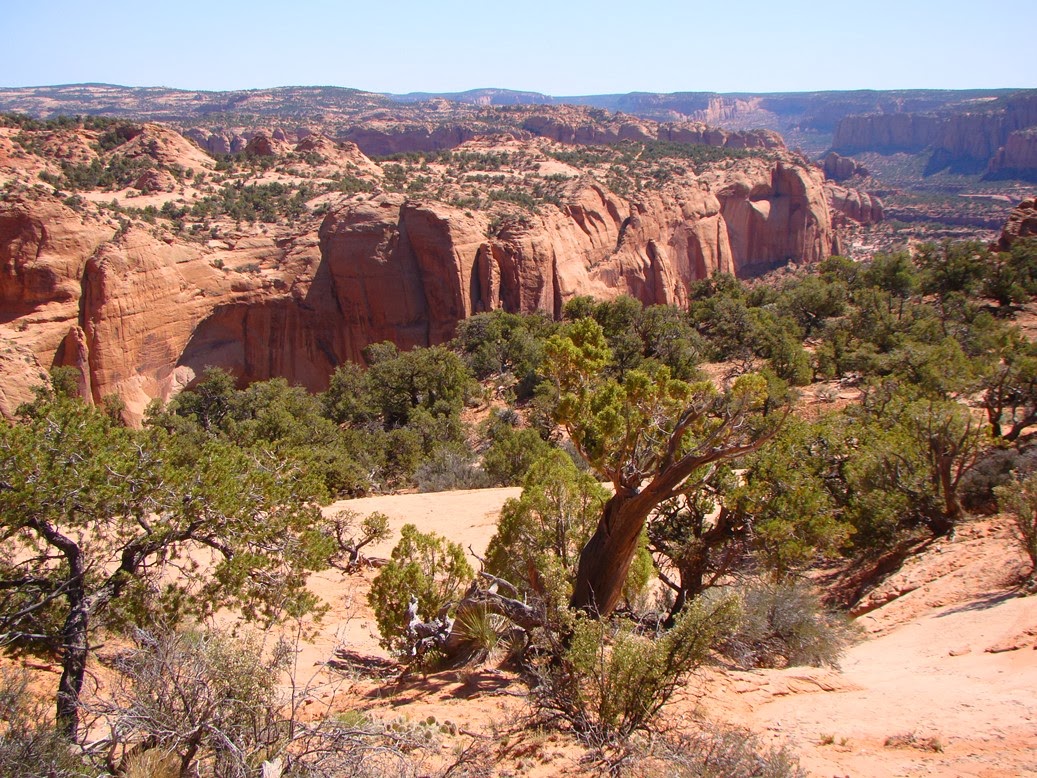 One thing I love about blogging is the total freedom be distracted and leave projects unfinished. This is something I inadvertently did six months ago. I got distracted by a river trip down the Grand Canyon and four field trip classes to the Cascades, the Sierra, and the California Coast. But I'm back to try and finish a series on my other incredible trip this last year: a journey through America's Never Never with a group of my geology students. You can catch up with the earlier posts by clicking here.

As I said in the original post, the Never Never is a remote and largely inaccessible part of the Northern Territory and Queensland of Australia's Outback. To some, it is a place that one would "never, never" want to go (despite this neat-sounding trip). To some of those who live there, it is a place one would never, never want to leave.

There are many parallels between Australia's Outback and the American Southwest, especially the Colorado Plateau. Most of the local populations live on the margins of the region, and until recent decades many parts remained unexplored by people of European descent. To others it has been home for thousands of years. The lands are ancient, each part revealing a fascinating geological story. And so it is that I refer to the Colorado Plateau as America's Never Never.

When we last left off the story we had explored Antelope Canyon, a deep slot canyon near Page Arizona. It was late by the time we finished our tour so the sun had set long before we arrived at our next campsite at Navajo National Monument on the lands of the Navajo people. 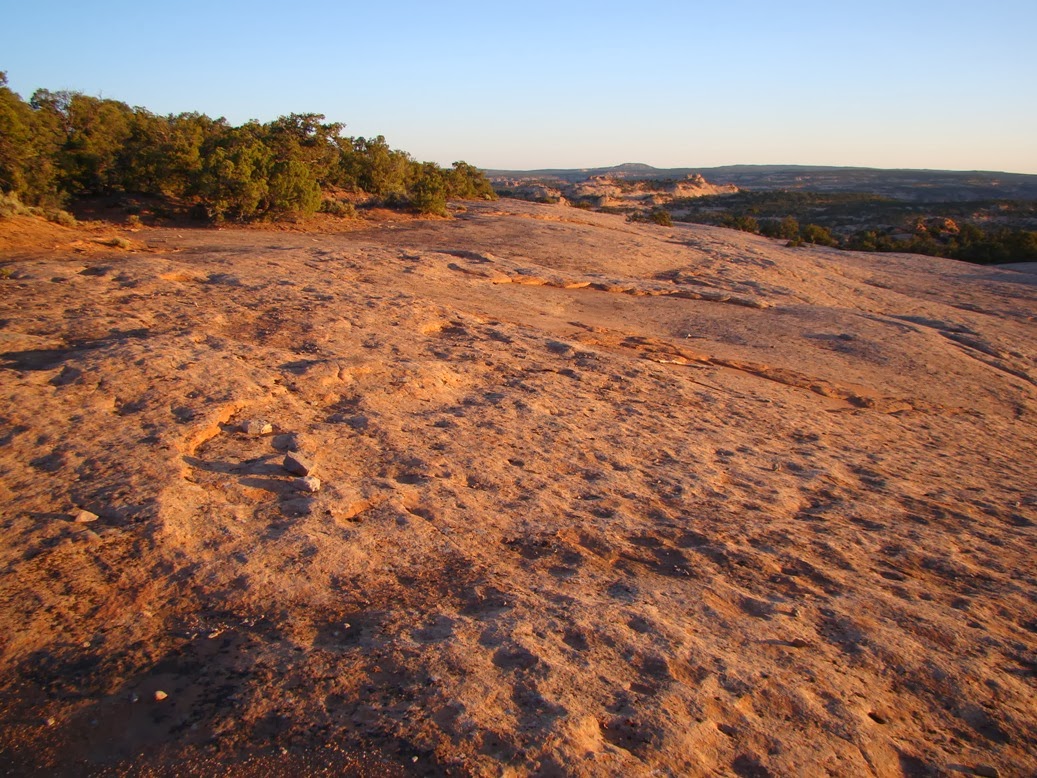 It was hard to get a sense of the country we had reached in the dark of the night, but when the sun rose I set out across the plateau to get a view of the countryside. Navajo National Monument is actually composed of three different units several miles apart: Inscription House, Keet Seel, and our location, Betatakin. Each of the units protects the ruins of an ancient people, the Ancestral Puebloans (once called the Anasazi). They were the "ancient ones" who lived on this land before the Navajo arrived hundreds of years ago. They abandoned the region 700 years ago; Their descendents live on the Hopi Reservation and the pueblos of New Mexico.

The land is unique. It is a high plateau called the Shonto that reaches elevations of more than 7,000 feet, which is high enough to support a forest of juniper and pinyon pines. The cooler forested highland is a stark contrast to the mostly barren deserts that surround the uplift. The plateau exposes Triassic and Jurassic aged sedimentary rocks, primarily the Navajo Sandstone. The Navajo is a major scenery maker in the region, responsible for the incredible cliffs in such places as Zion and Capitol Reef National Parks. The main drainage of this part of the Shonto Plateau is Tsegi Canyon, a deep gorge with an intricate maze of side canyons. Alcoves in the deep canyons protect some of the most perfectly preserved cliff dwellings to be found anywhere. 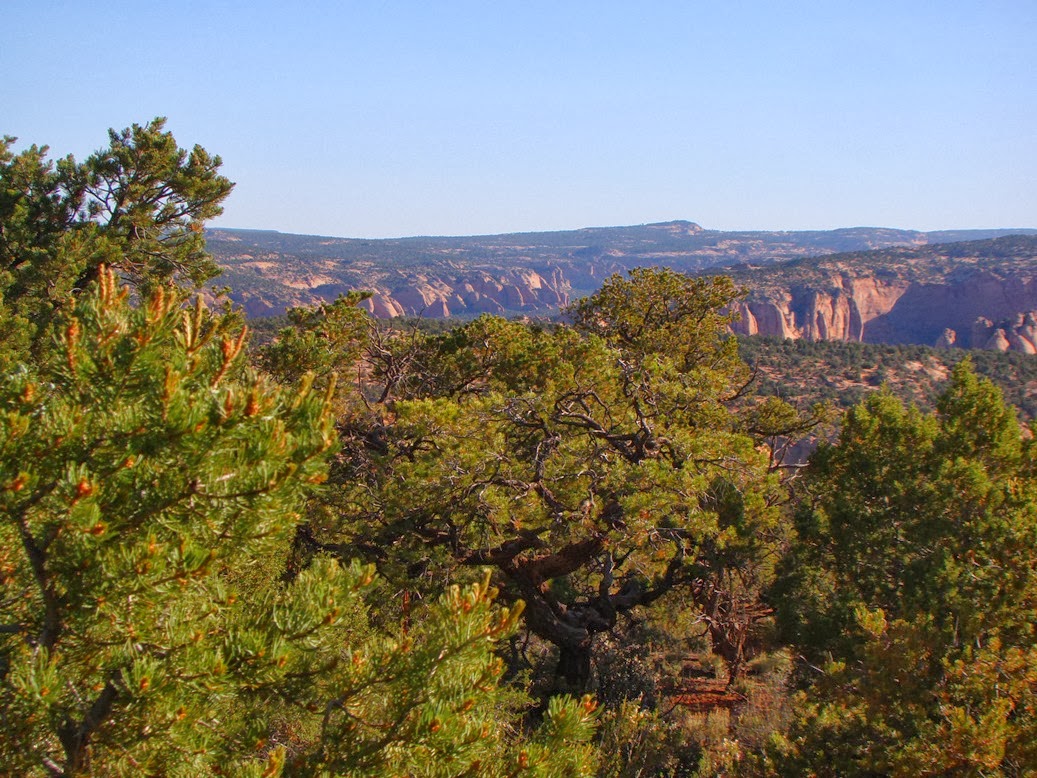 The alcoves are especially striking. There are impermeable layers of shale and siltstone within the Kayenta formation which underlies the Navajo Sandstone. Groundwater seeps downward through the Navajo and then encounters an impermeable layer. The water is forced to flow sideways until it breaches the surface at the base of a Navajo cliff. The cement holding the sandstone together dissolves and an alcove begins to form. It gets larger as slabs fall from the arch-shaped cavern. The alcoves turned out to be ideal spots for constructing villages. They are dry, protected from the worst of the weather, often have seeps or springs as a secure water supply, and offer superb defensive positions. 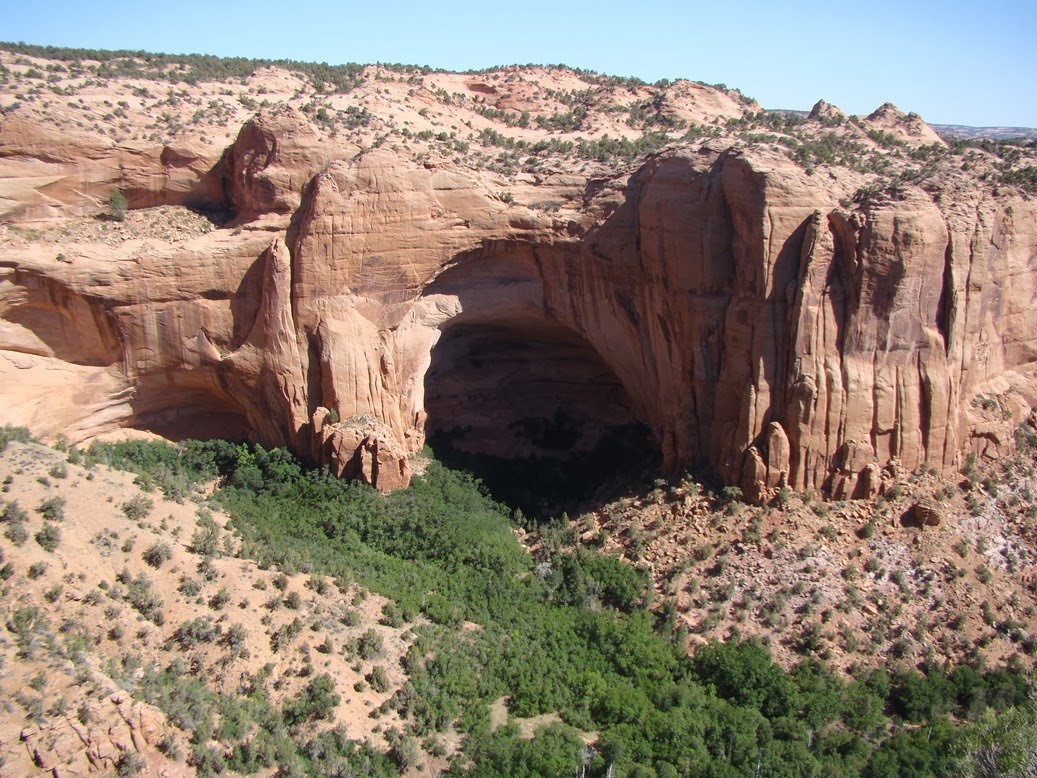 Defense? From what or whom? The Ancestral Puebloans lived in the region for well over a thousand years, but did not build the defensible cliff dwellings until very close to the time of regional abandonment. It's ironic that the most iconic remains of their culture represented not the pinnacle of their success, but the harbinger of their doom. It has long been the subject of speculation as to why the Ancestral Puebloans left the Four Corners area (except for the Hopi who continue to live in the general area). The speculation centers on a horrific drought that gripped the region in the late 1200s. Persistent drought would have led to ongoing crop failures and soil loss (as wind blew away dry topsoil). Starvation would presumably have led in turn to raiding and warfare. 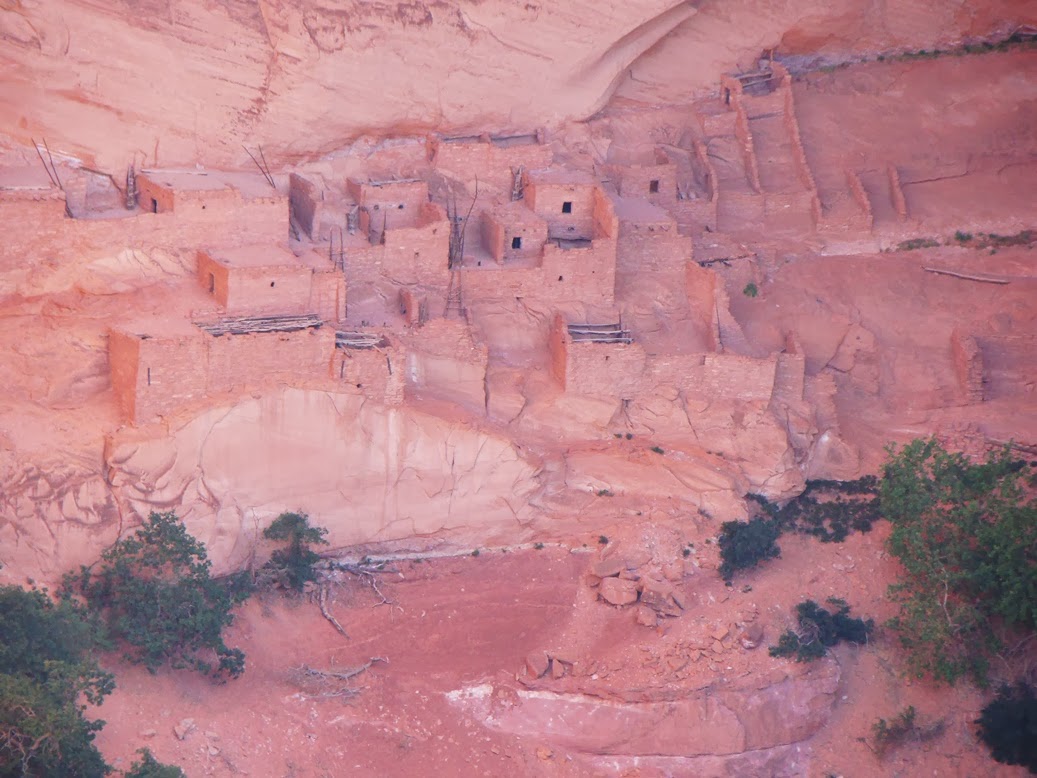 Anthropologists, archaeologists, and the descendants of the Ancestral Puebloans have differences of opinion as to the reasons for the abandonment, but drought and resource depletion must have played a role. The villages at Keet Seel and Betatakin (in the pictures above and below) look like their inhabitants simply walked away, and the buildings have persisted in their protective alcoves through the intervening centuries.

We like to think in our technological bubble that we are somehow immune from such problems, but the need for water and food is still fundamental, and we are once again seeing the story unfold in the Colorado Plateau region of persistent decades-long drought. The present drought has now lasted 14 years, not far off from the 25 year drought that forced the Ancestral Puebloans to leave. The big difference is that the population that depends on water from the Colorado River now numbers in the millions, not the thousands. We can draw water from elsewhere, but drought is gripping California as well. It is a worrisome time.

One cannot explore the villages of Navajo National Monument without taking a stiff hike and the presence of a ranger/guide (Inscription House is closed to all visitation), but a short trail winds across the plateau surface from the visitor center to an overlook hundreds of feet above Betatakin. The preservation of the village is truly astounding, given our sorry penchant for destruction of all things ancient. It's a fascinating place to visit. 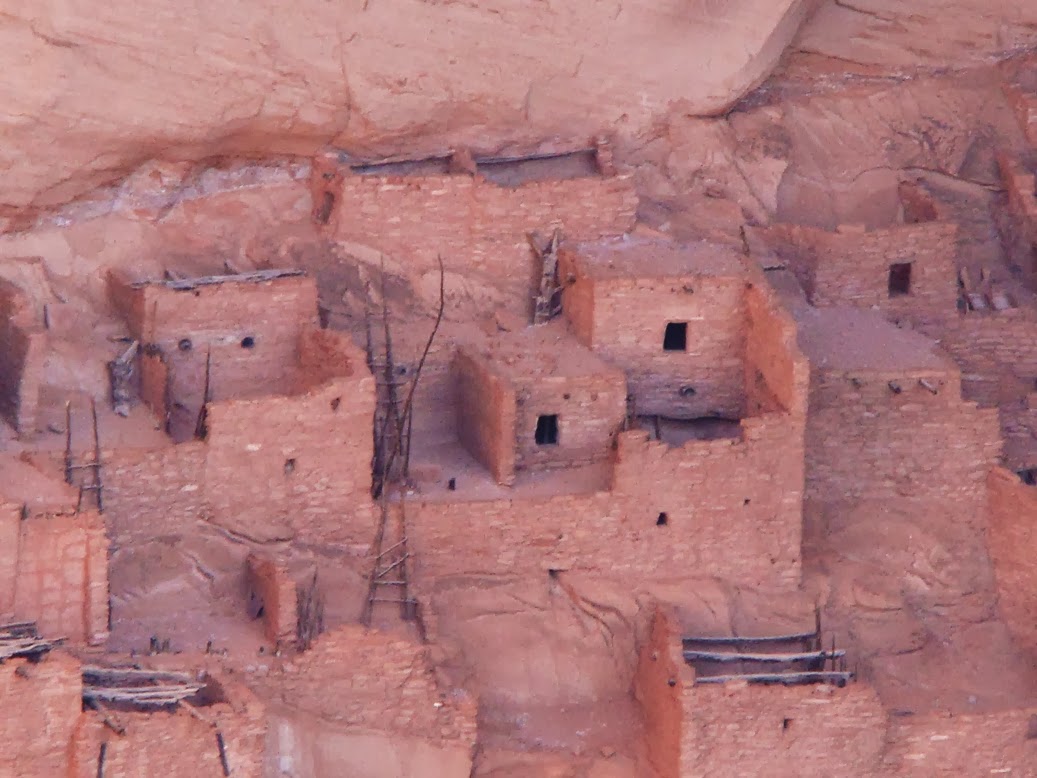 Heard this at a campfire many years ago. To the tune of "The Wabash Cannonball":
Down in Arizona, where scholars’ minds are free,
The theories are all fool proof, as any fool can see
This song it is the story of the greatest one of all
How them Athabaskan Bastards caused the Great Pueblo fall.

They stand up in their classrooms and there they hem and haw,
And tell fantastic stories of surveys that they saw,
When the Apache got there, they do not know at all,
But them Athabaskan Bastards caused the Great Pueblo Fall.

Along the Blue Pacific, along the rock bound shore,
From Columbia to Sonora, we find them evermore.
They were fierce and they were warlike, its known to one and all.
That them Athabaskan Bastards caused the Great Pueblo Fall.

Way down in the southlands lived a sedentary folk,
Who thought of scurvy nomads as something of a joke.
They could not know, they could not see, the meaning to it all.
So them Athabaskan Bastards caused the Great Pueblo Fall.

Throughout the spring and summer, they grew their corn and beans.
Then came the blow that shattered all those great Pueblo dreams.
The burning of the cornfields, it cast a smoky pall,
As them Athabaskan Bastards caused the Great Pueblo Fall.

The lookout saw them coming, his eyes were sharp and true,
They ran back to their pueblos, they pulled up the ladders too.
They theught that they were safe there, but those Bastards scaled the wall.
Yes them Athabaskan Bastards caused the Great Pueblo Fall.