Is Science Dead? In my town, a resounding "NO"! 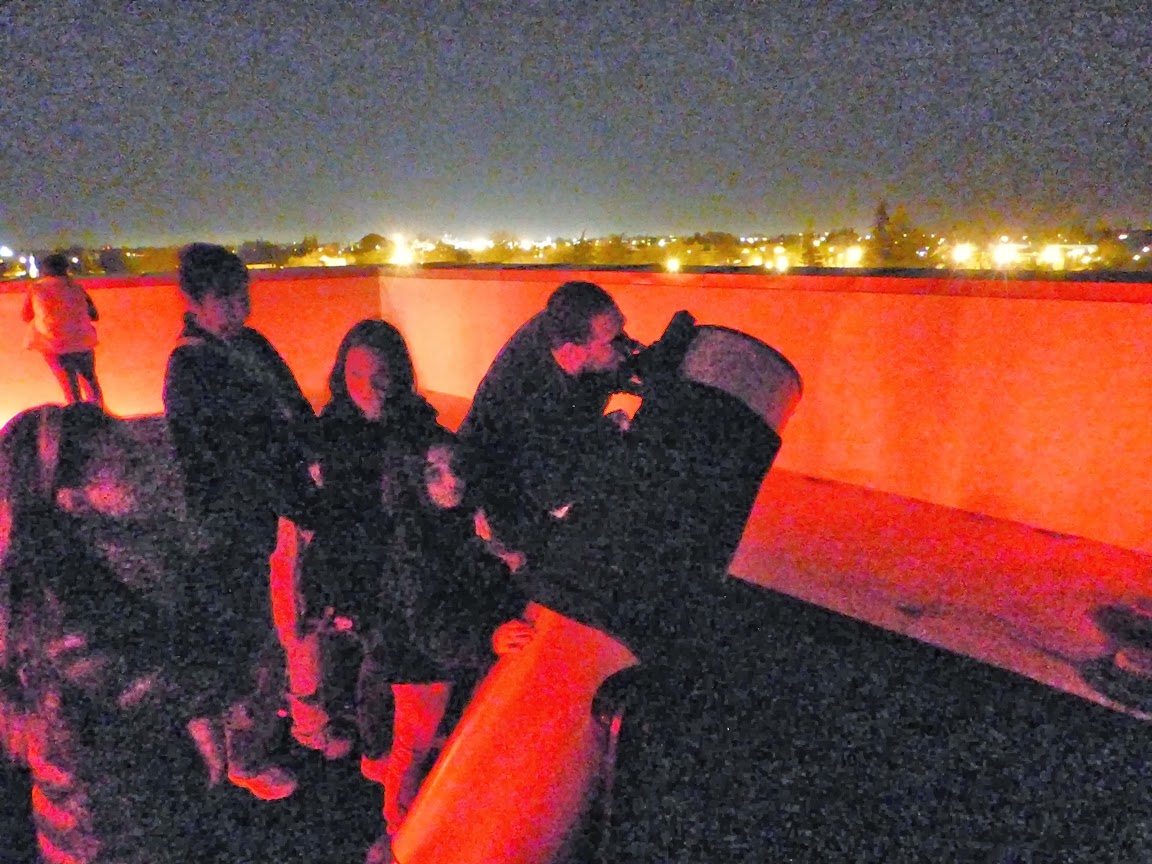 Science is in trouble, they say. Kids just aren't interested in science careers, and schools hardly teach it anyway. And in the poorer parts of the country, the problems are even worse. No one cares anymore.

I beg to differ. I teach in one of the poorer parts of California, a town and county that has suffered depression-level unemployment levels even during the "good times" prior to the 2008 economic burp. Our schools suffered cut after cut, and the whole region pretty much went to hell with the highest foreclosure rates in the country, and some of the worst crime (at least it was of the property-stealing type instead of violence). And yet we are still here...

I couldn't be prouder of the people in my county and city. The state may have deserted us when times got tough, but we decided to take steps on our own to make life better for our children. One of them was a bond issue that resulted in the transformation of our community college campus.

Modesto Junior College is the second oldest community college in the state, established in 1922. And her age was showing. The Science Building in which I taught classes for 24 years was constructed in the 1950s with a partial renovation in the early 1990s to keep it from collapsing in a moderate earthquake (I felt so much better after that). The gas and power lines barely operated, and the teaching facilities and equipment were ancient as well. The climate-control was an ongoing joke. The technology environment was laughable. How bad was it? When we tossed out the old equipment, a fair amount was purchased by a Hollywood film organization that needed real-looking props for movies set in the fifties and sixties.

So it was when times were still relatively good (meaning unemployment dropped down to maybe 12% instead of 18%), the people in our region decided to invest in the future of education for our children. We don't have a California State University or University of California campus in our town, so MJC is the sole college choice, and we decided to transform it into one of the best community colleges in the state. Especially in the area of science education.

We've been teaching in the Science Community Center for not quite a year, and some parts of the building complex are still under construction. We have a new high-tech observatory, an advanced planetarium facility (the only newest-generation star projector in North America) and state of the art labs for teaching biology, astronomy, physics, chemistry, and the earth sciences. What's still to come? An incredible museum of natural history (the Great Valley Museum), and an Outdoor Education Laboratory that will include native plants and environments including a stream, a pond, and a "native" rock garden displaying samples from the surrounding mountains. I've felt a transformation in my teaching experience, and I'm beginning to sense a change in our community too. The events of the last two days were the catalyst for my thoughts and musings for today. We used to have telescope viewing nights in our old digs. But we only had a lawn in a tree-filled quad full of security lights to set up the scopes. Mind you, I have nothing against trees; we fought hard to keep those grand old trees when a proposal arose tear them down for unrelated construction. But you couldn't see much in the sky.

Our Science center is three stories tall, but we made sure to include stair and elevator access to the roof along with a viewing platform and high walls to protect people from falling off. The walls also serve as a barrier to light pollution. We now have horizon-to-horizon viewing ability. And our community responded to the new opportunity; where we once had dozens show up for a viewing, we now have hundreds! Although our planetarium is not yet fully staffed, the shows we've offered thus far have been filled to capacity. I'm excited to be training to become one of the "planetarium pilots" for the presentations.

There was an additional twist. At the telescope viewing last night, we laid out some of our paleontology samples for the kids to see while they waited for a chance to look through the scopes. The skulls are new and valued additions to our collection. Few people know that the very first dinosaur ever discovered in California was found in our own county. The region has also been a rich locality for other ancient creatures including mosasaurs and ichthyosaurs of the Mesozoic, and in more recent time, sabertooth cats, mammoths, sloths and short-faced bears lived on the valley floor. The kids were fascinated to find out the heritage of the land they lived on. 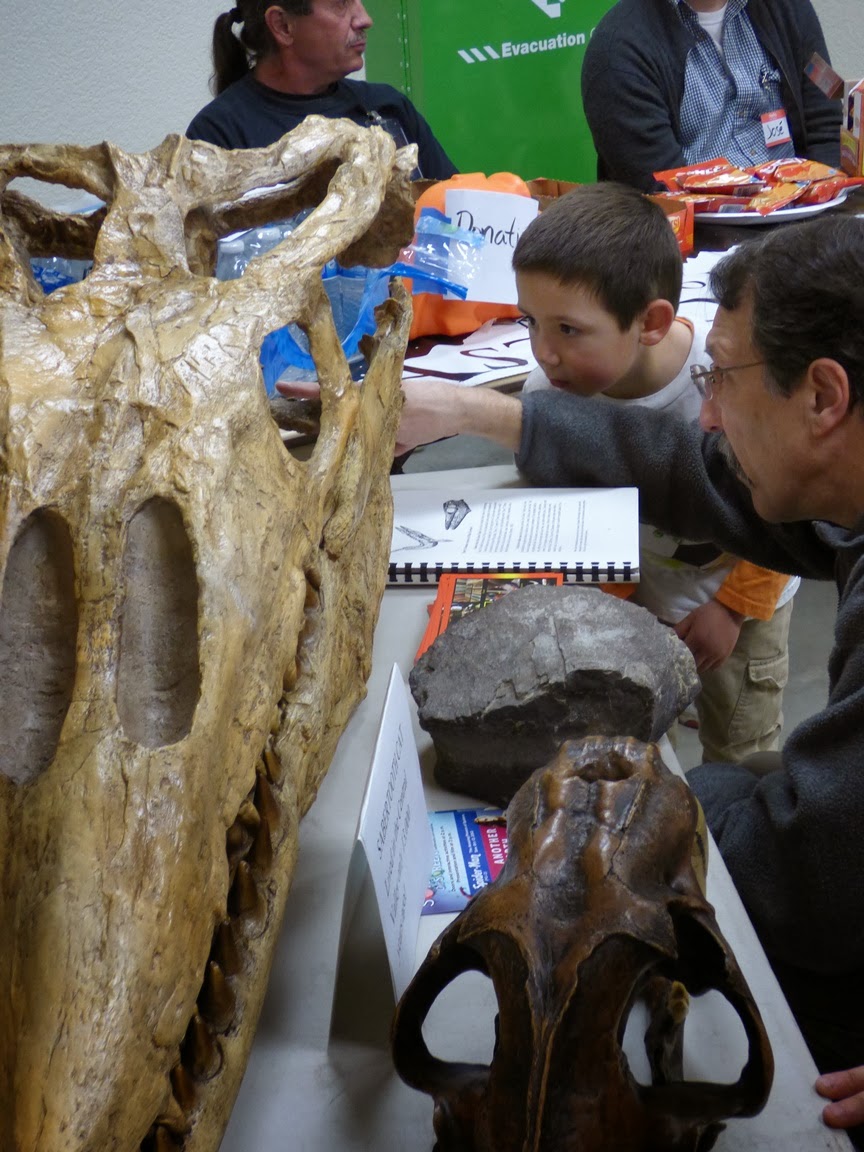 I've been impressed how community-oriented the building is. There are common areas where students and teachers can mingle and work together. Exhibits are in place on all the floors, and there is a beautiful spiral staircase that encircles a four-story high DNA molecule. There is a beautiful plaza in the front of the building with benches inscribed with the names of the greatest pioneering scientists, and a beautiful fountain complex that illustrates mathematics acting in the physical world. The astronomy-related events are just one aspect of the rejuvenation of science education in our region. Our monthly Modesto Area Partners in Science presentations are usually filled to capacity. The Science Olympiad that we sponsor for local high and junior high schools continues to grow and expand (more on that next week; it's happening next weekend). It is an exciting time to be a teacher in our region.

All of this happened because our community invested in their own future with the construction of the Science Community Center. Modesto now has an incredible facility for the teaching and promotion of science in our city, one of the best such complexes in the state. Our community has a lot of incredible potential, and the people here are just starting to unleash it. They can be proud of what they have done. 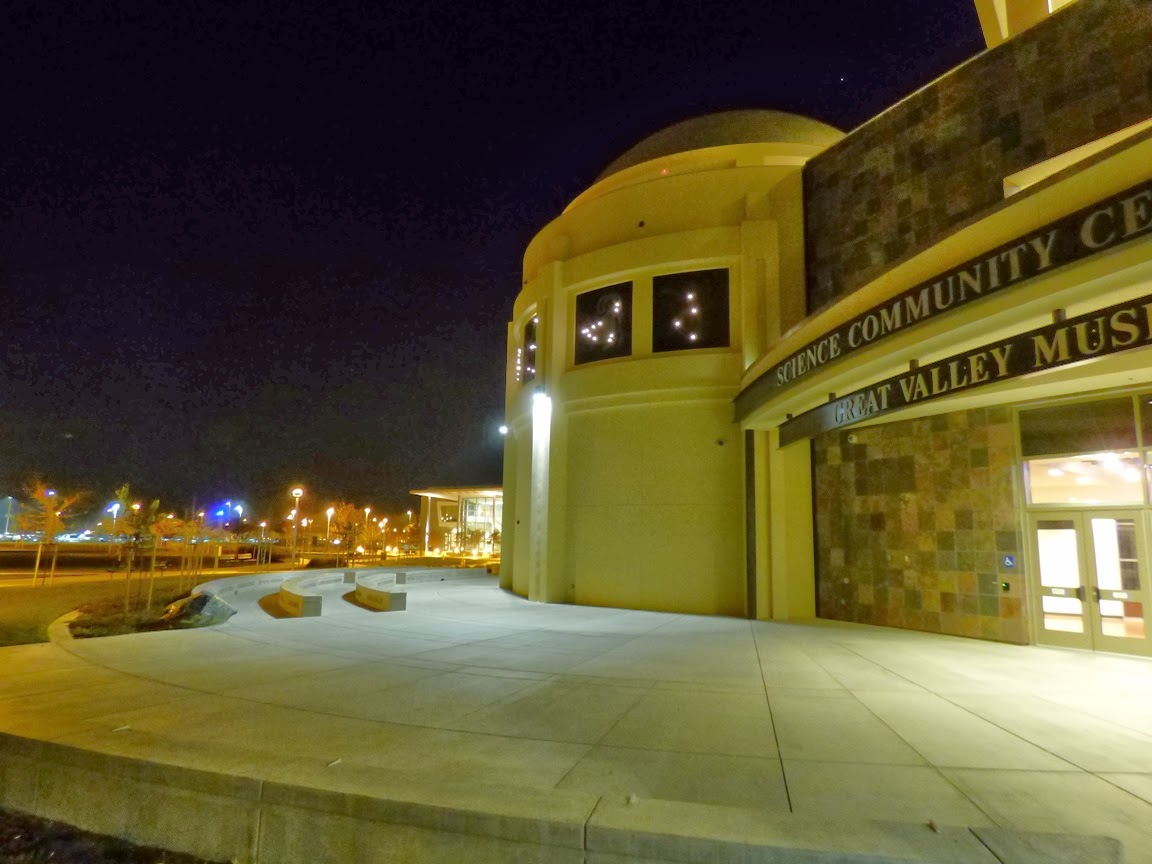 You hit it on the nose: "our community invested in their own future ."
At my school, we have a great investment in parking structures -- without electric vehicle charging stations. A great investment for a world nearing (or at) peak oil!