It's the stuff of science fiction movies. A pastoral peaceful society is overwhelmed by a technologically superior and more numerous invader because they were unlucky to be living on top of something valuable to the invader. Movies like Independence Day, Avatar, Cowboys and Aliens, War of the Worlds and so many others. In these movies the plucky group of survivors usually manage to fight back and somehow destroy or beat back the offending culture, because, well,  that's the way these stories are supposed to end.

This is a continuation of our exploration of America's Never Never, the vast desert lands of the Colorado Plateau that we explored last summer. Our previous entry was a trip into the world of the Ancestral Puebloans at Navajo National Monument. A few minutes after leaving the quiet serenity of a park preserving a part of the past we were thrust very much into the present at Black Mesa. 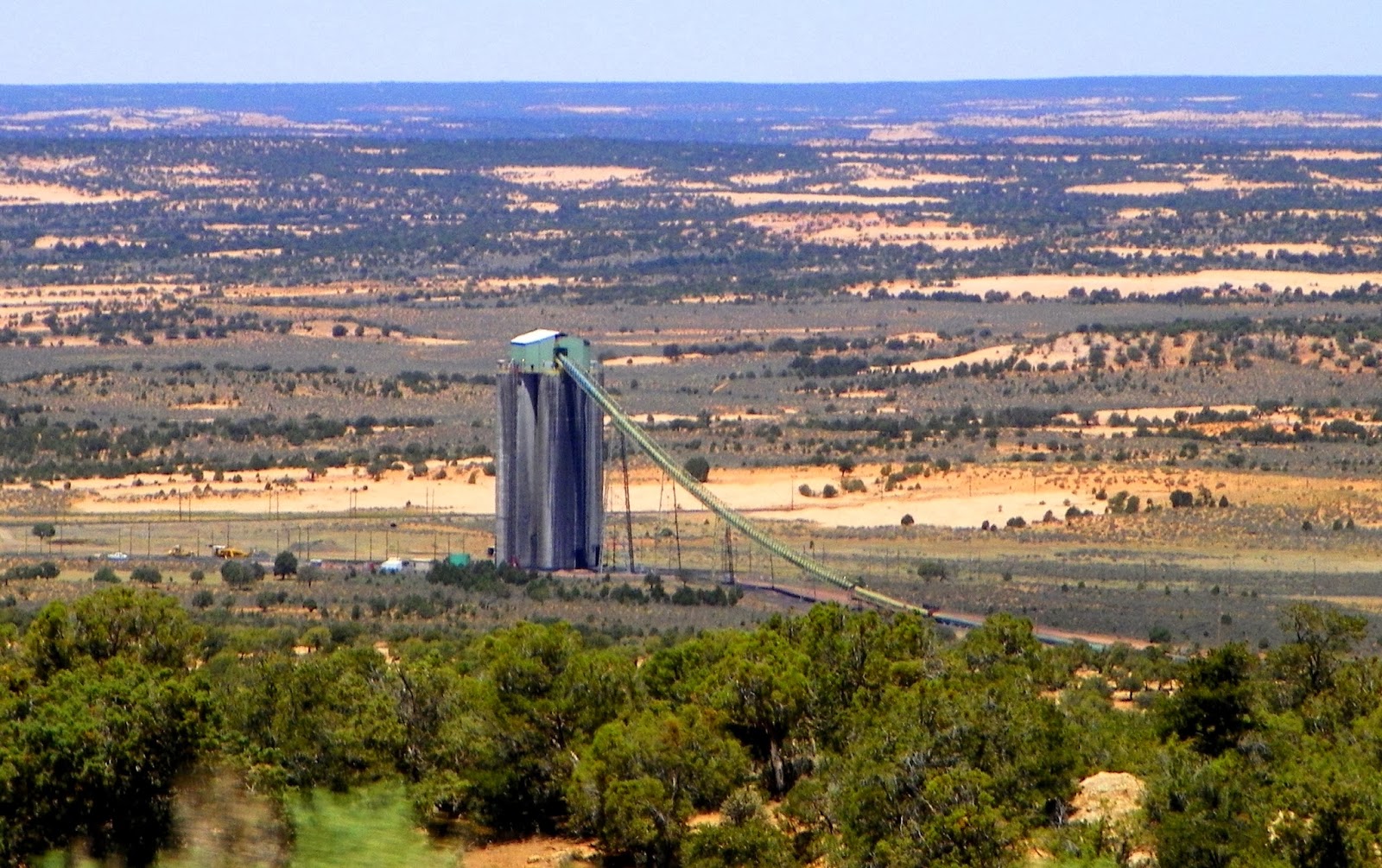 So how is this for a plot line for a movie?

A high plateau in the wilds of the American west. The escarpment rises dramatically out of the desert floor, with an extensive forest of Pinyon Pine and Juniper across the summit. A pair of ancient cultures calls the mesa home,  They've had their differences over the centuries but by and large they get along with each other. They make their homes on this beautiful mesa, subsisting on corn, squash, beans, and herding sheep. A few scattered springs provide life-giving water, enough to meet their modest needs.

Cue the darkened boardroom. Camera pans back to reveal a group of wizened old white men. They're discussing their plan.

"We are here to discuss the vast coal resource that underlies the mesa. There are billions of dollars just waiting to be dug up, and we must have that money..."

A voice from the back of the room: "But the mesa is in the middle of nowhere. There's no infrastructure. Where can we burn the coal?"

"But that's the wonder of our plan. There is a coal burning plant on the Colorado River 270 miles away, and another just 70 miles away. A railroad will suffice for the closer power plant, but for the more distant plant we have devised an ingenious plan. A pipeline!"

"A what? Pipelines carry liquids, not rocks! What madness is this?

"That's just it. We'll grind the coal into little bits, pump a bunch of water from the ground, and make a slurry mix! We'll be able to mine all the coal we want!"

The intern spoke up: "But sir, that's an arid environment. The water resources are limited. And people live there! They've lived there for hundreds of years! You'll be destroying a way of life". His voice wavered as he realized the mistake he had just made. A few eyes rolled, but mostly there was a quiet agreement throughout the room that this young man would not be in the organization for much longer.

The CEO spoke, and all eyes turned his way: "Forgive the young man's innocence. I'm sure we've all experienced moments of empathy, but luckily we've moved on from that. But he speaks to an important issue. Those people do technically own the land above our coal, and they need to be dealt with. What plans do we have?"

"The usual payoffs, sir. Offers of money and jobs. But here's the best part: the lawyer negotiating on behalf of those people? He's on our payroll! You may be assured that the royalties we pay will be a fraction of the usual rate!"

And the gigantic digging machines bit into the earth and rock.... 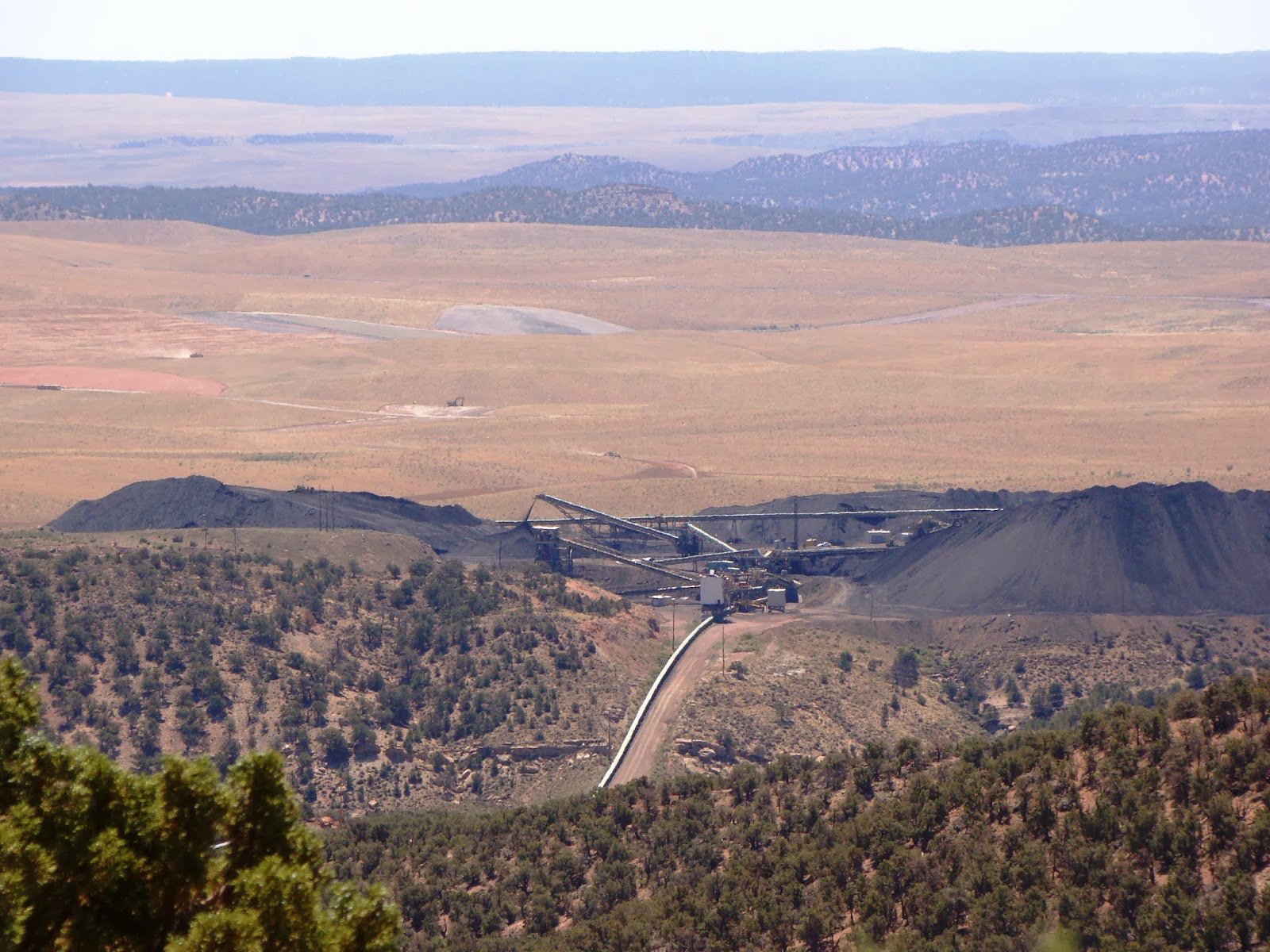 This is of course a simplistic description of a very complex series of events that led to the development of two major strip mines on the northern end of Black Mesa. But the railroad is real (that's the storage silo that loads the railroad cars at the top of the post). And the slurry pipeline, the first and only of its kind was built and was used for several decades (one of the mines was shut down in 2005). The royalties paid for both coal and water were indeed far less than those paid at other mines, and the lawyer negotiating on behalf of the Hopi people, John Sterling Boyden, was indeed on the payroll of Peabody Coal. I've written on the issue previously; you can read it here. 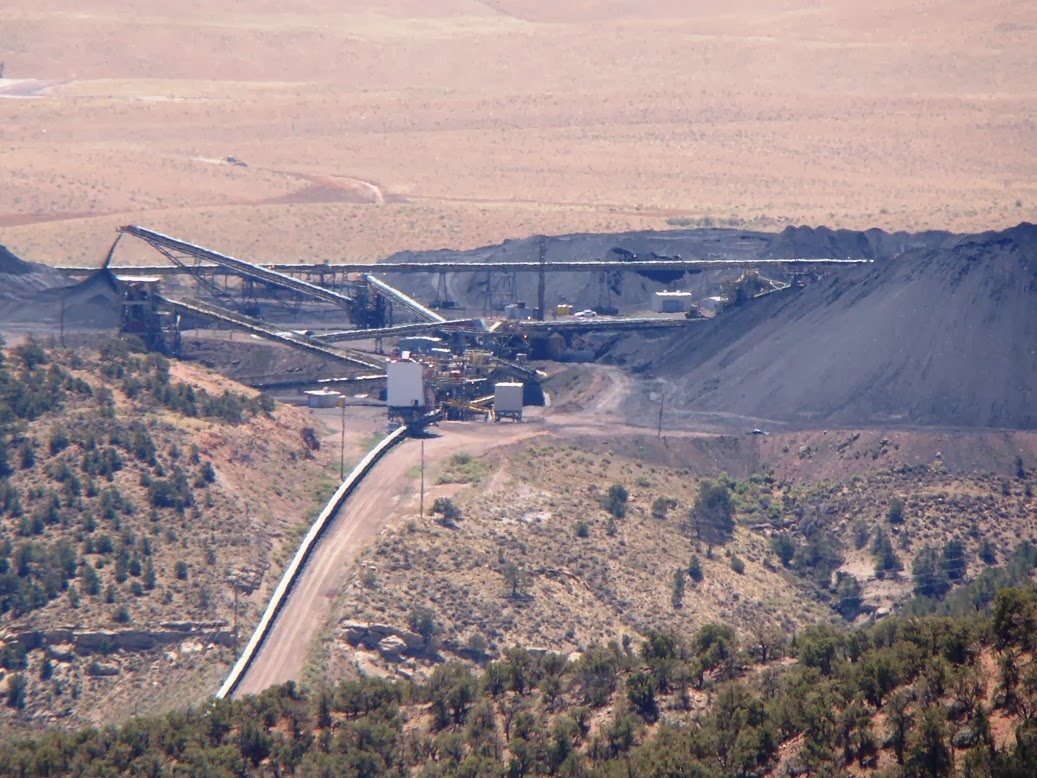 The scale of the mining is hard to take in. You can watch the beautiful pictures and videos published by Peabody Coal (like this one) that tout the benefits of the coal mine, the jobs, and the reclamation of the landscape after the coal has been removed. I certainly can't speak to the feelings and thoughts of the Navajo and Hopi people whose land was exploited for the purpose of producing electrical power for the likes of Los Angeles, Phoenix and Las Vegas. There was certainly fierce opposition at all stages of mine development. I can't help but notice that the air pollution produced by the burning of coal did not foul the air of the three urban regions listed above, but instead contributed to smog across the Colorado Plateau, including the obscuring of the views from the rims of Grand Canyon and Bryce Canyon. And the real profits did not accrue to the people who were the stewards and owners of the land, they went instead to Peabody Coal.

Every time I see these mines, I hear the voice of John Prine and his immortal words in "Paradise":


"Then the coal company came with the world's largest shovel
And they tortured the timber and stripped all the land
Well, they dug for their coal till the land was forsaken
Then they wrote it all down as the progress of man." 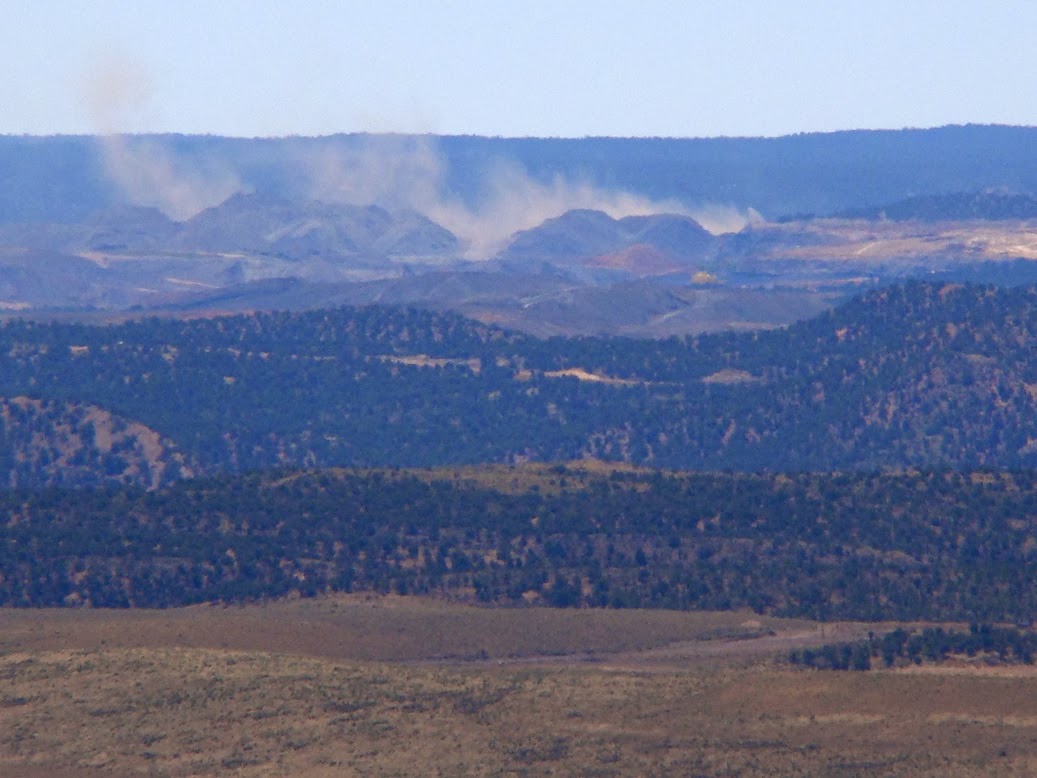 Thank you for telling this story.
Reliable sources say that Peabody Coal has regained their "right" to continue their wasteful slurry operations again, and incredibly, they've also requested an extension of their contested lease.
for more info, check out www.blackmesatrust.org