Out of the Valley of Death: Dreams of the Water Times at Fossil Falls 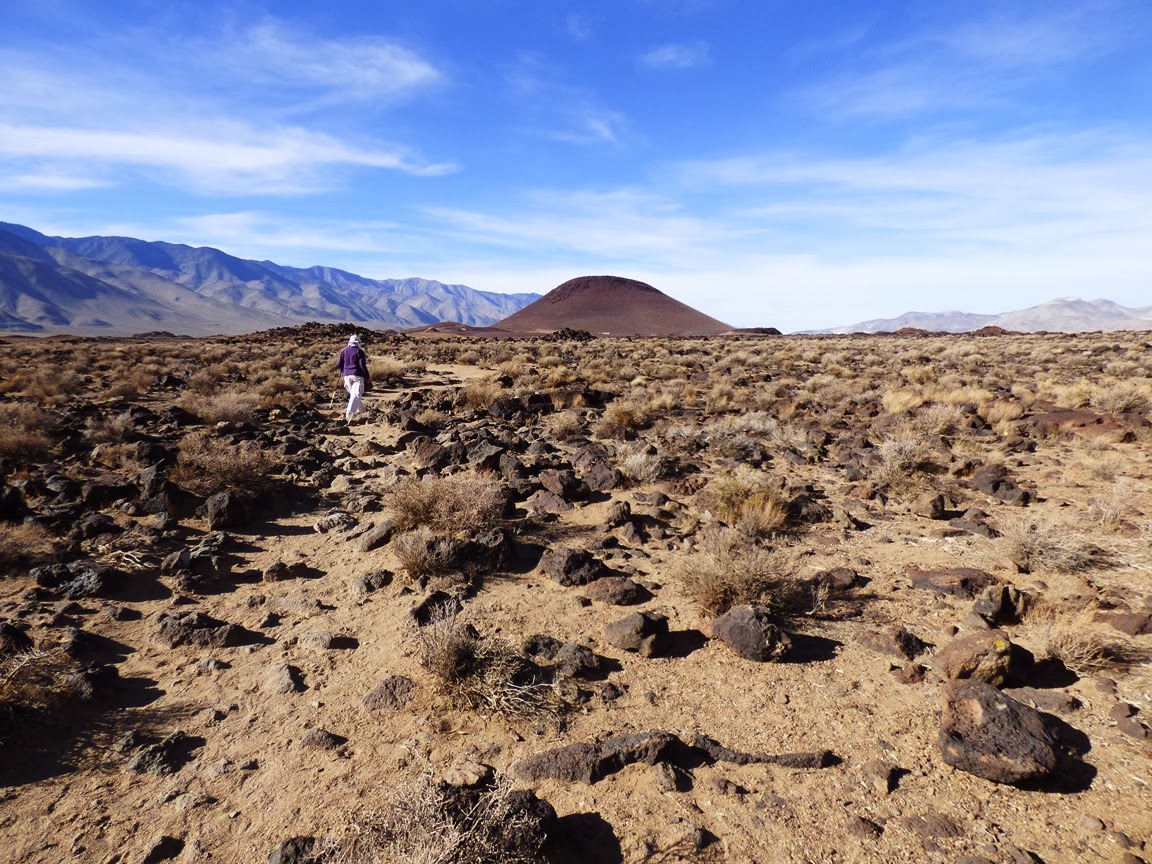 The lands east of the Sierra Nevada are dry. The massive mountain wall of granitic rock captures the Pacific storms that reach California and wrings the moisture out, leaving barren deserts and culminating in the hottest spot in the world and the driest locality in North America: Death Valley. Rocks of course are superbly exposed in this landscape, but the overwhelming impression for most visitors is the dryness. 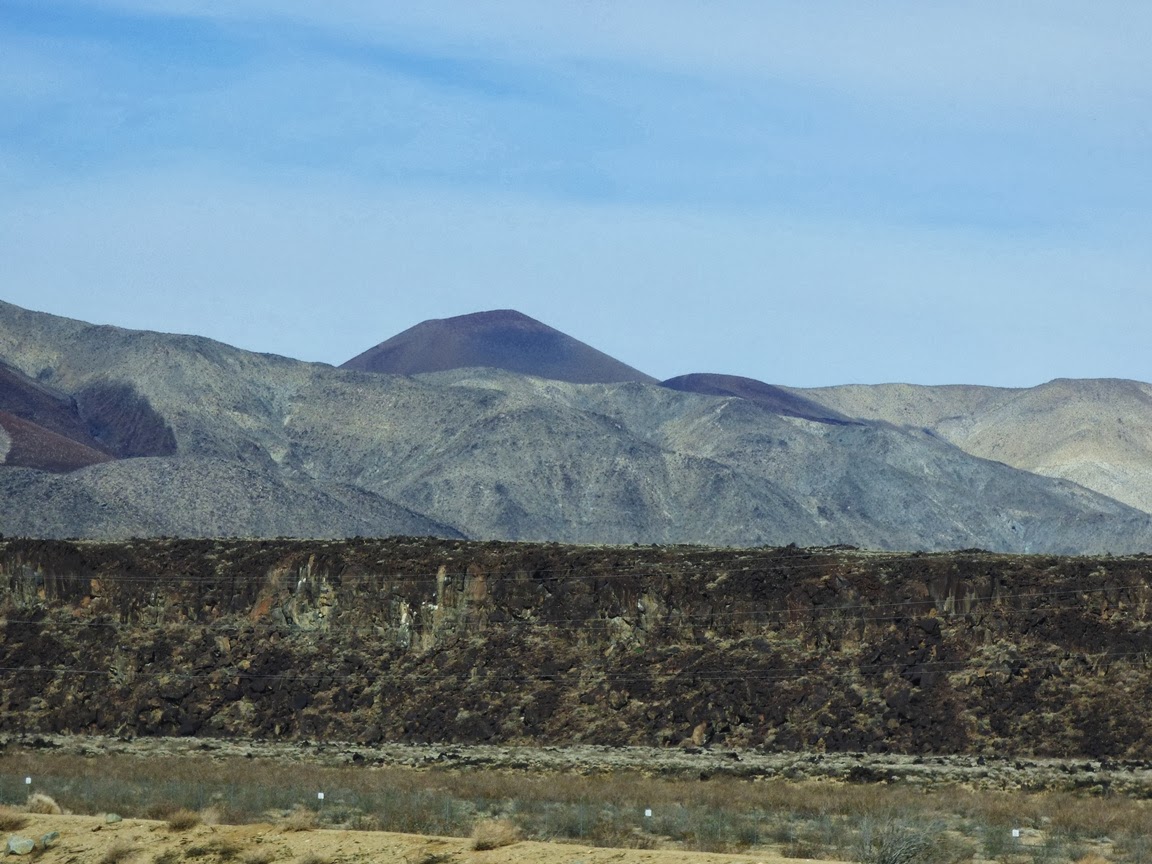 It wasn't always this way. Climate change happens on different scales. There is the very rapid climate change that we are enduring in the present day, where major changes are taking decades rather than centuries or millennia. And then there is the kind of change that happens on a time scale of tens of thousands of years. That has been happening in the eastern Sierra Nevada over the last two million years as the northern hemisphere alternated between cold wet periods and warmer stretches. These were the Pleistocene ice ages. Evidence for at least six glacial advances can be discerned in the rocks and sediments of the Sierra Nevada, but independent analysis of ocean core sediments suggests that at least a dozen glacial advances took place (larger events tended to erase the evidence of earlier but smaller events in land deposits). 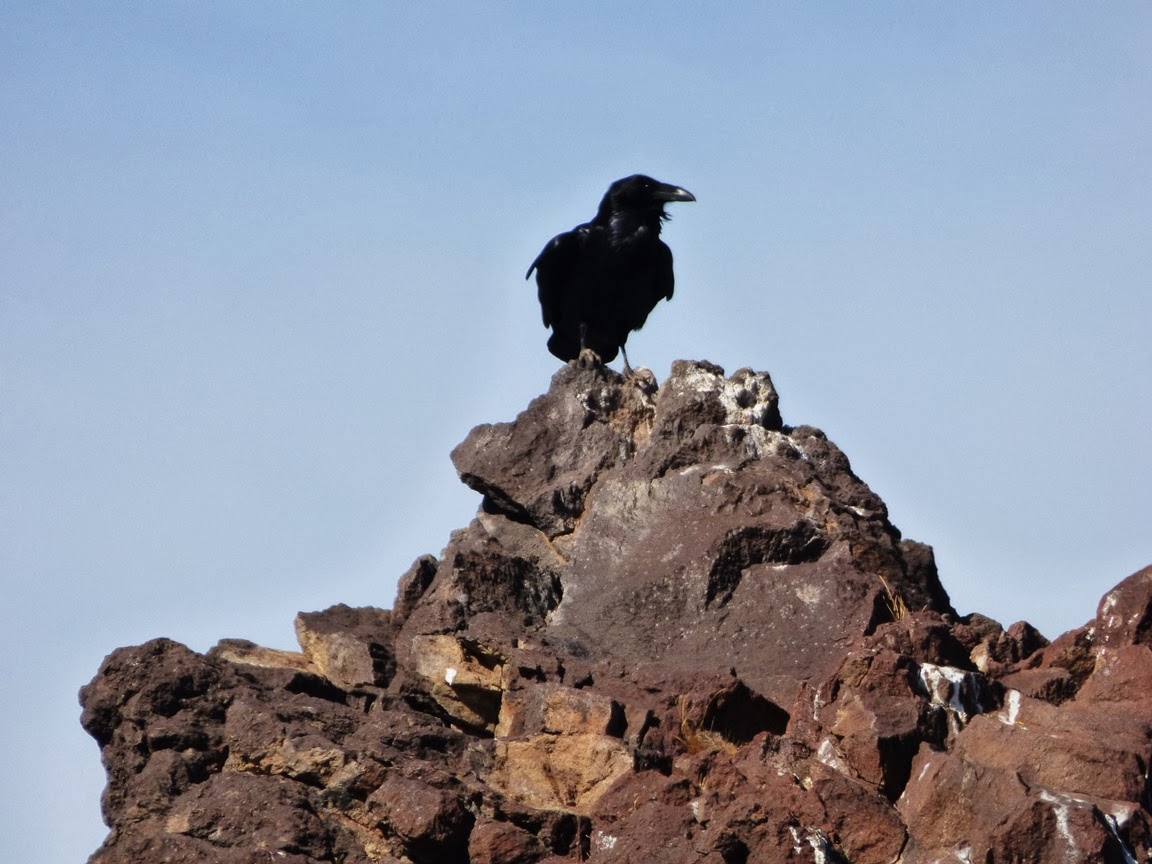 And yet the rocks retain the memory of water. Or in non-anthropomorphic language, the rocks contain clear evidence of earlier periods of wetter climate. A popular stop for geology field trips in the eastern Sierra Nevada is Fossil Falls in the Coso volcanic field between Ridgecrest and Lone Pine. The attraction of the site isn't a fossil, but the evidence of a large flowing river in the desert. 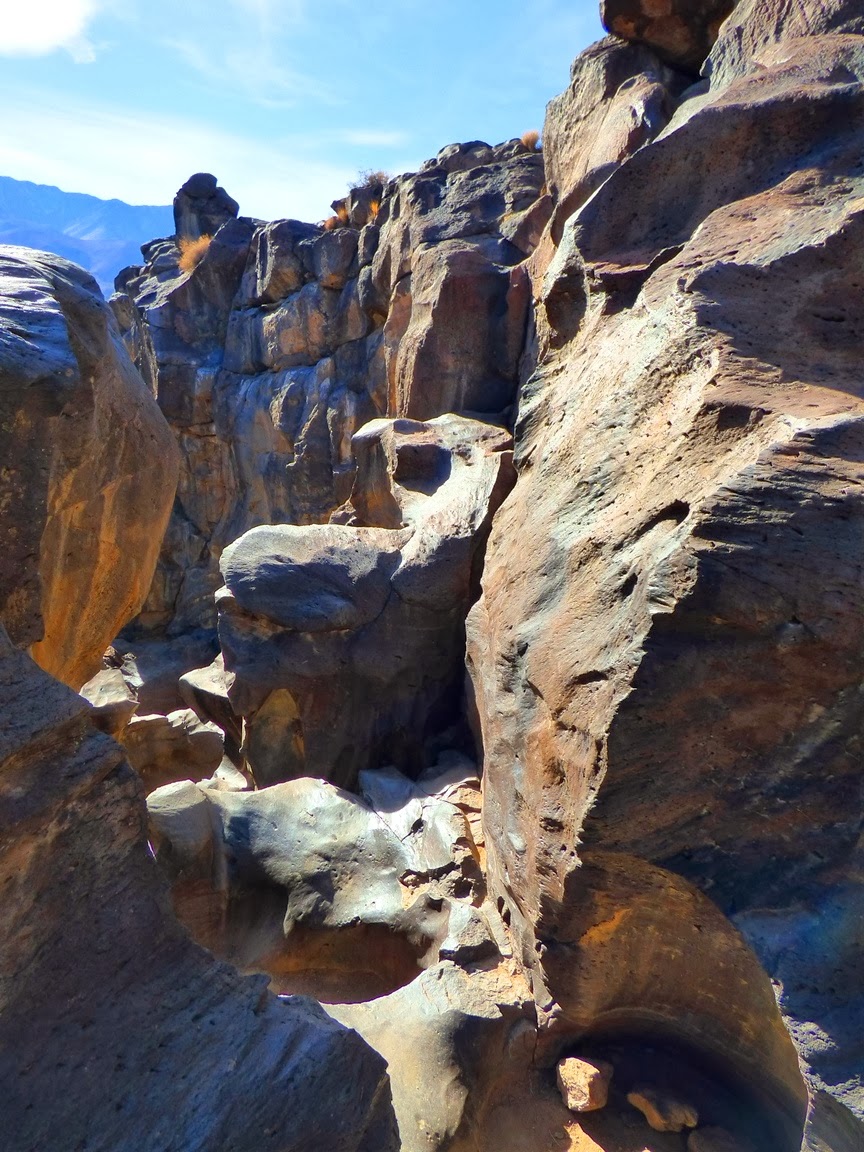 The valleys east of the Sierra Nevada are there not there because of river erosion. They exist because the crust itself has been stretched to the breaking point, and faults have formed. Some blocks sank to form deep graben valleys, while other blocks remained elevated to form the high mountains (horsts). Previously existing river systems were disrupted and vast regions no longer drained to the sea. This area of interior drainage is called the Great Basin, and it extends from the Sierra Nevada to the Wasatch Front in the state of Utah.

During the wet and cold periods the glaciers didn't reach far down into the valleys east of the Sierra Crest. But they did melt, and the meltwaters collected in lakes in the bottom of the deep graben valleys. When the cold periods lasted long enough, the lakes would fill to overflowing and spill over into the next basin. Fossil Falls are situated between Owens Lake and China Lake, with the cinder cones, plug domes, and basaltic lava flows of the Coso volcanic field in between. Lava flows from cones like Red Hill (above) occasionally blocked the river that would sometimes flow between the two currently dry lakes (Owens Lake contained a thirty foot deep lake as recently as the 1920s, but water diversions to Los Angeles caused it to dry up; it would need to be several hundred feet deep before it could spill over again at Fossil Falls). 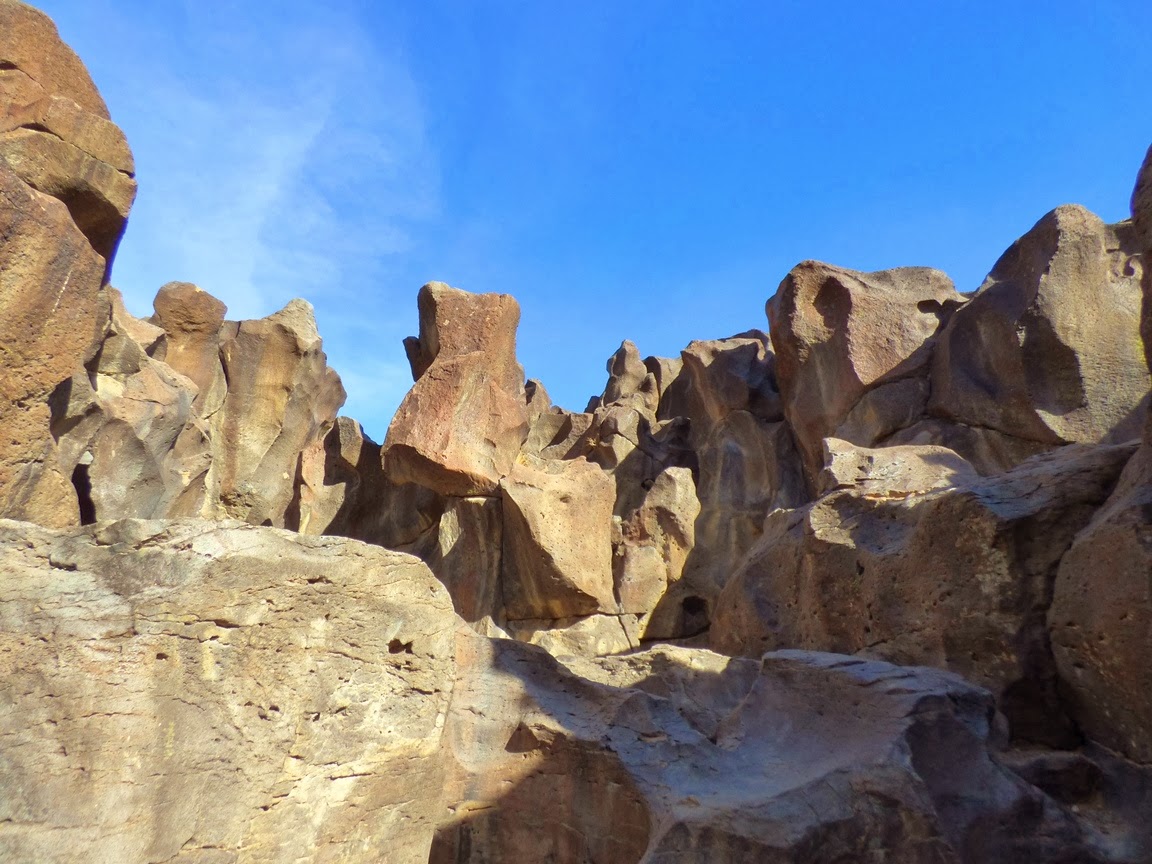 The strangely shaped rocks then originated as the Owens River flowed and spilled over the edge of the lava flow that stood in its path. The smallest irregularities in the basalt would cause swirls and eddies in the flow, and sand, gravel and pebbles would grind at the edges of the shallow basins, eroding and deepening them. Eventually they would become potholes, and some of the potholes at Fossil Falls are immense. At least one of them tunneled ten or twelve feet down and broke through the canyon wall (below), forming a climbing challenge for canyon explorers (I proved I could shimmy up the thing a decade or two ago, so I don't need to prove it anymore...). 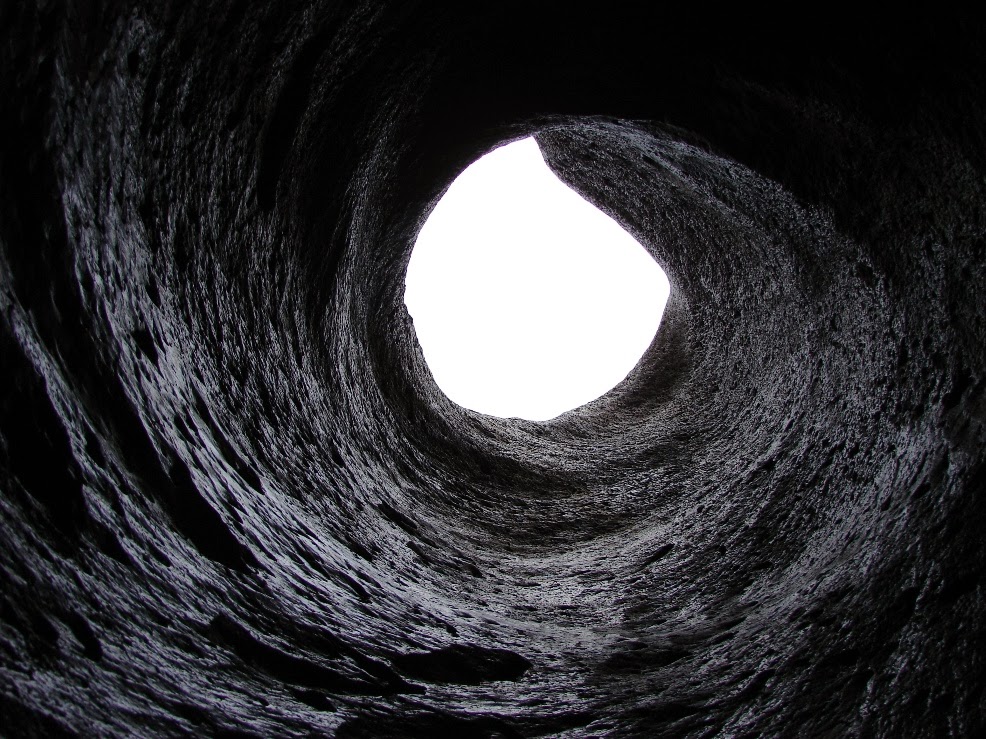 There is life in the potholes. When rain fills some of them, eggs of fairy shrimp hatch and for a few short weeks the small arthropods live, grow, mate, and die, leaving their eggs to wait for the next wet year. 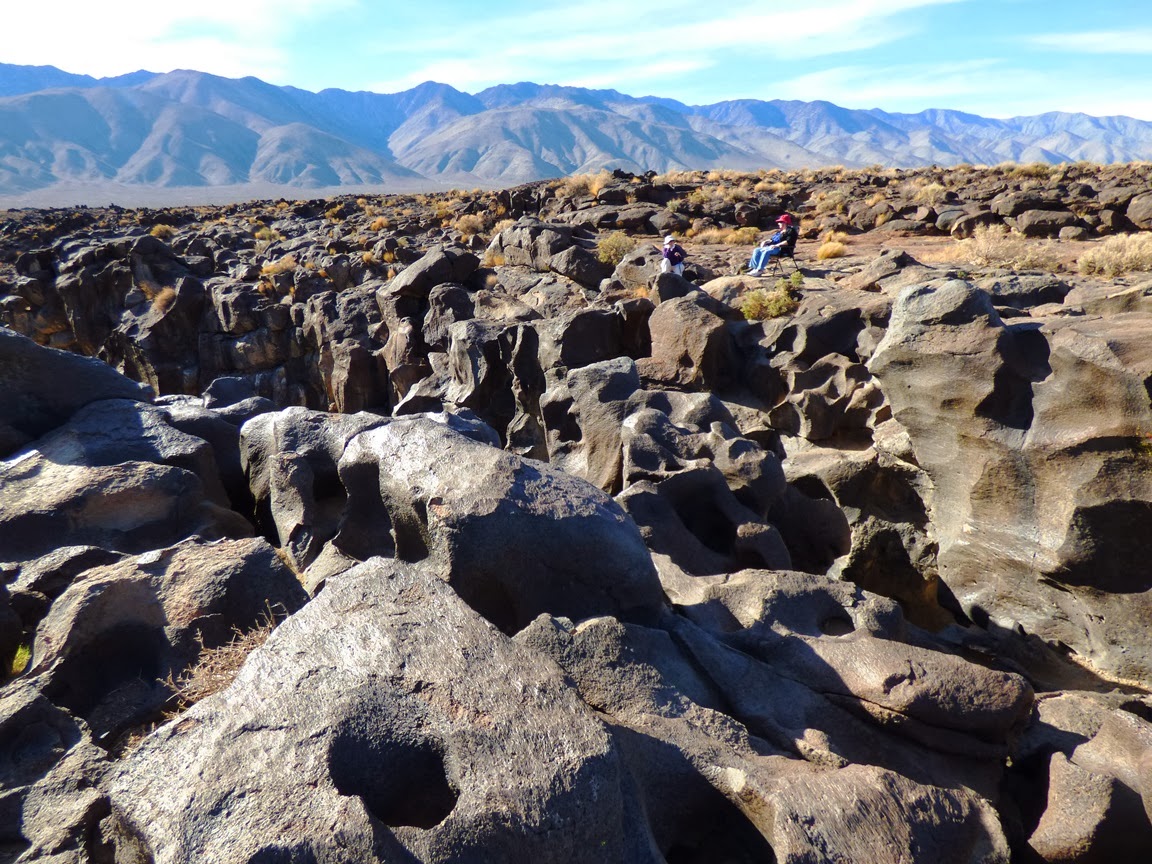 It is strange to stand at this ancient river bed and hear only the gusts of wind. One can travel in one's mind though, and start to hear the crashing waters, the verdant cottonwood trees rustling, and the sounds of animals coming to the river for a drink. There were mammoths at the time, and horses, and camels, along with the more familiar deer and pronghorn antelope. One might have spied a Sabertooth Cat, a Dire Wolf, or an American Lion lying in wait in the hope for a meal. In the latest times, humans hunted for game in this more equitable environment. Chips of obsidian and housing rings are still present. 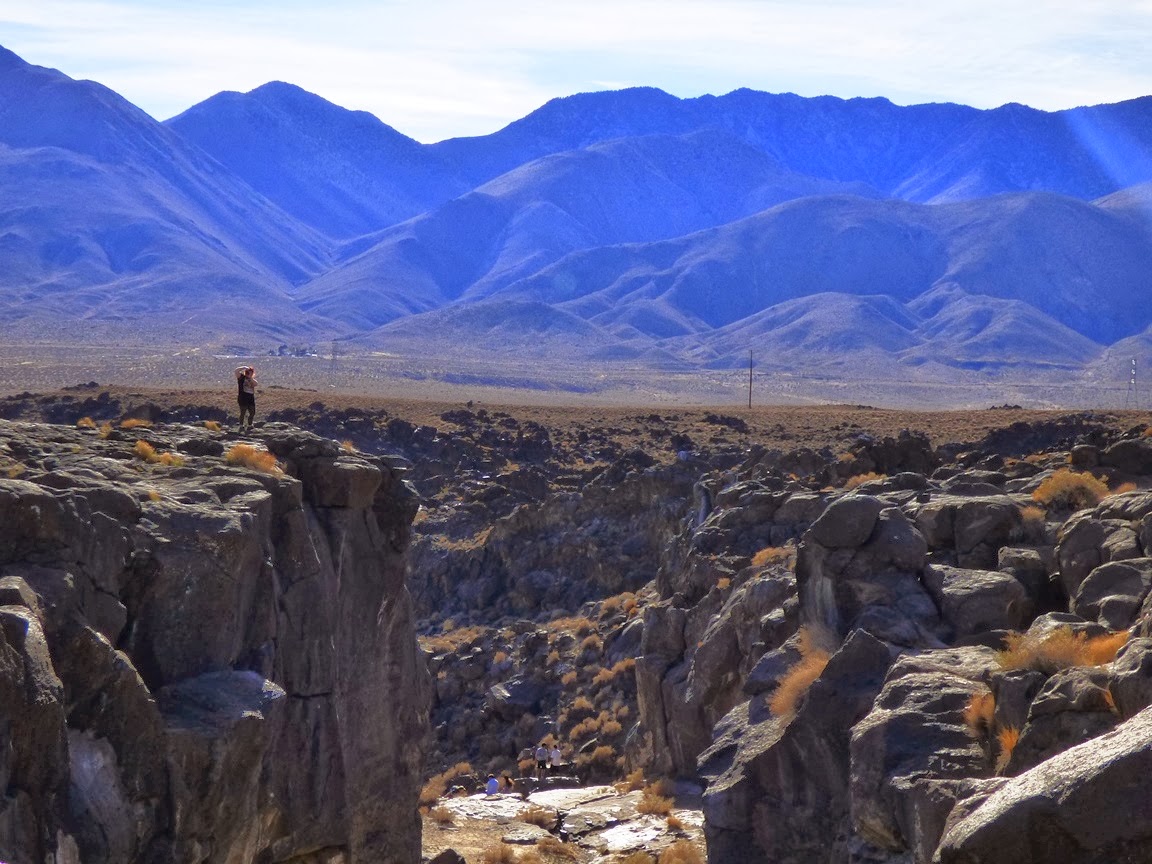 2005 was an extraordinarily wet year, and storms were actively dumping water into the drainage upstream of Fossil Falls. That year was the one and only time I've ever seen water flow through the gorge. The little stream could never be mistaken for the torrent that once flowed through and carved the canyon, but it was beautiful to see an echo of the water times of the Owens River system. 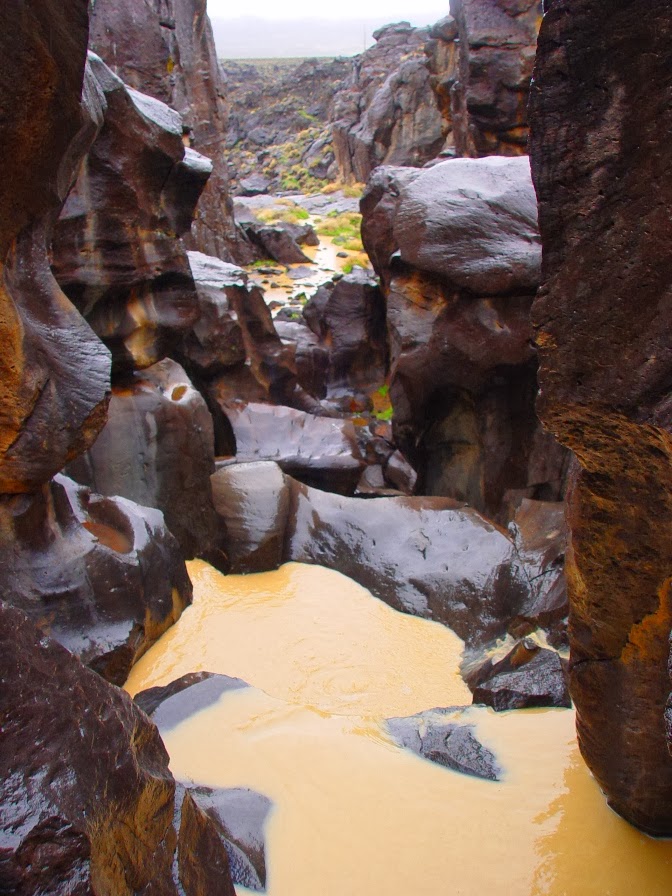 Fossil Falls is on Bureau of Land Management lands, and has been "developed" as a recreation site, with a small parking lot, campsite, and restrooms. The trail to the fall is not long, about a quarter mile, but it has a few rough spots. Climbing around the potholes can be a little intimidating, but the views are great from the rim as well. 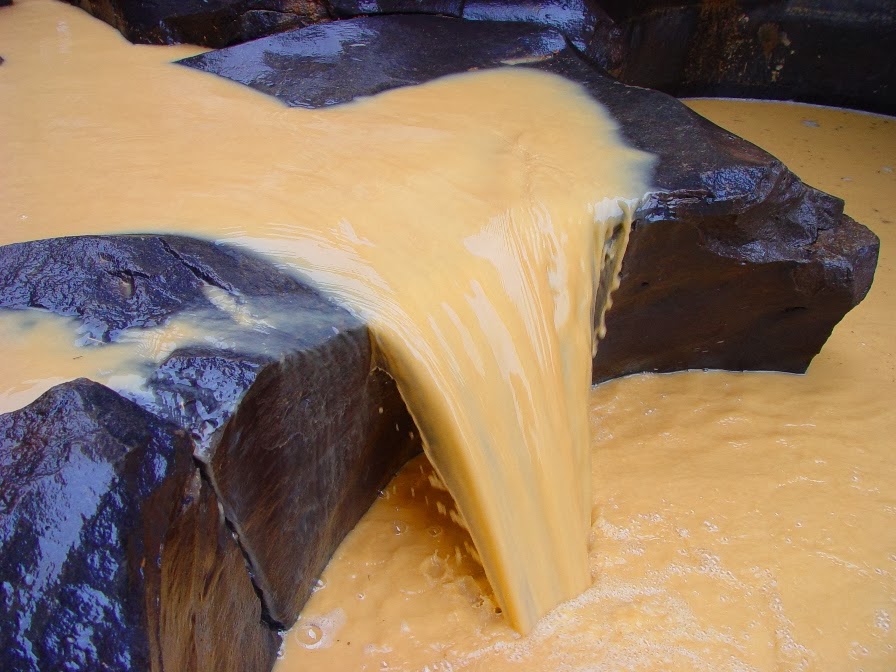