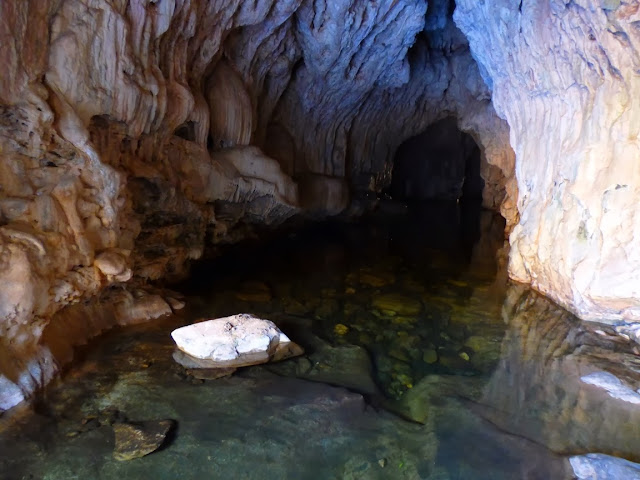 In our last post we had a look at one of the showcase caves of the Sierra Nevada, Moaning Caverns. They are well-known, if for no reason other than the billboards along Highway 99, and the leaflets in restaurants all over the region. And the cave is spectacular. Far less known are some cavern features just a few miles away as the crow flies: Natural Bridges.

Most people hearing the name will think of Natural Bridges State Park on the beach in Santa Cruz. The caves we visited are a long distance from the coast. They are located on the upper reaches of Coyote Creek, a tributary of the Stanislaus River that drains into New Melones Reservoir near Columbia State Historical Park. It's in the middle of the Mother Lode Gold Rush country. 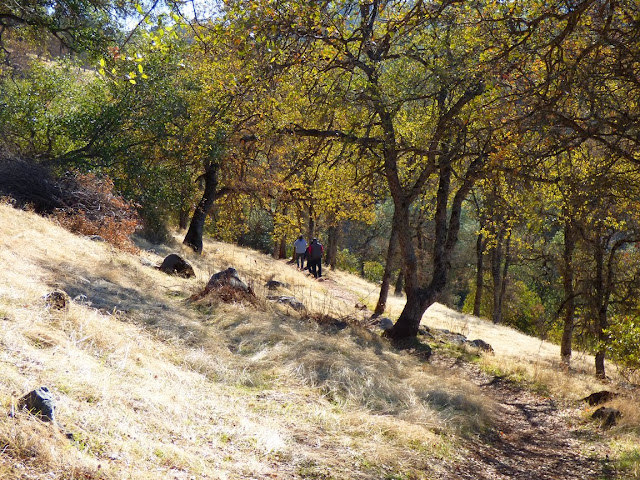 The bridges are at the end of a hike of about a mile on a good trail, although we were surprised by a bit of mud and snow on the trail last Saturday. It was slippery in a few spots, but we got down the hill okay. 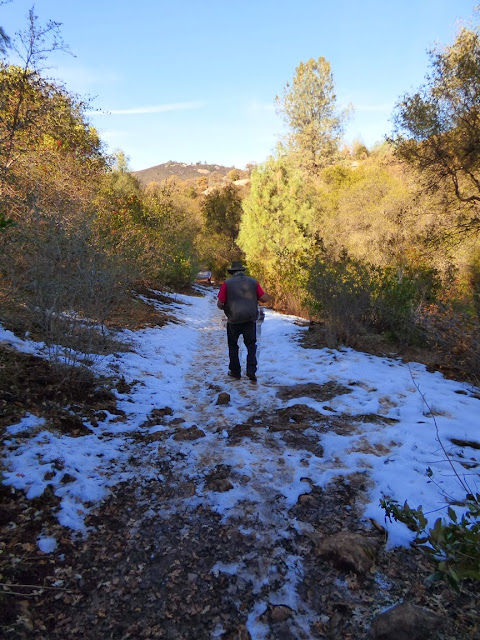 There are two bridges that span Coyote Creek. I thought for a long time that the creek had breached a cavern below the river bed, and that erosion had carved the openings below the bridges. The facts are a bit more complicated. There was a canyon first (no caverns), and a set of springs that emerged from the sides of the canyon. The springs were full of dissolved calcium carbonate, and as the water evaporated, calcite deposits, called travertine, were left behind. They perhaps would have resembled Mammoth Hot Springs in Yellowstone National Park. The springs grew larger and larger, and eventually spanned the creek. Somewhere along the way, the water breached the base of the springs and flowed through, and even eroded into the underlying marble. 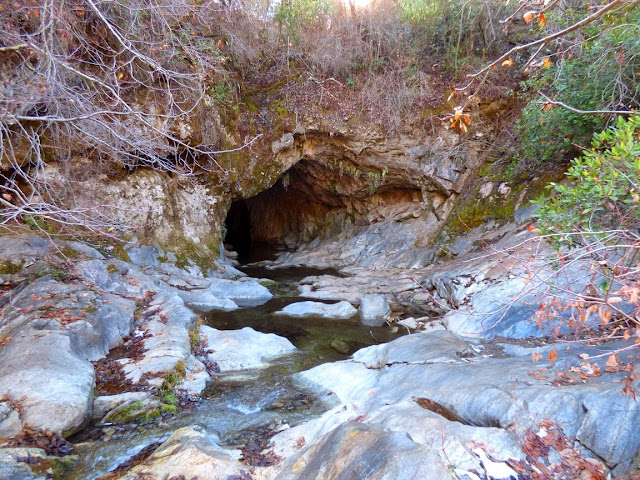 The creek usually has a modest flow, although I've read of flash floods that backed up and flowed over the top of the upper bridge. The water has pooled under the bridges, in some places 7-8 feet deep. In warmer weather, visitors will swim or float inner tubes through the caves. Last Saturday, we looked at the snow, and most of us chose to stay dry. It is possible though to explore several yards into the caves on dry rock. 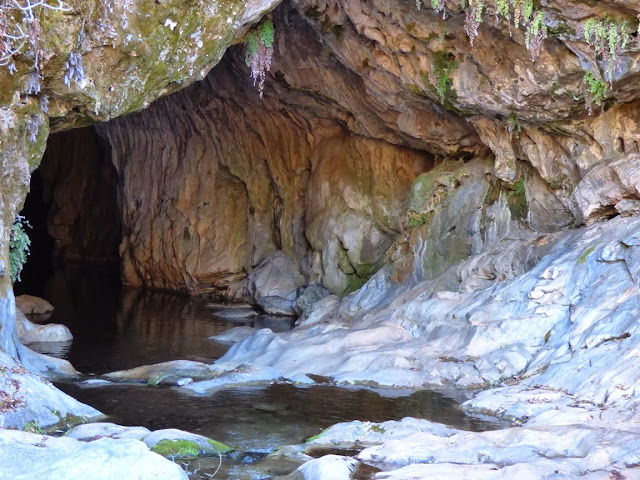 The lower entrance to the main bridge/cave is wide with a large clear pool of water. In the afternoon, the sun reflects off the surface and shimmers on the roof of the cave. 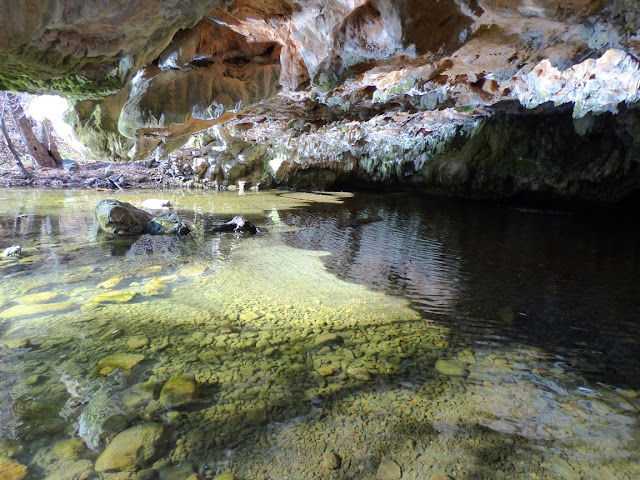 Some of the springs that formed the travertine are still active, and pour into the pool from the ceiling of the cave entrance. There is a constant chorus of dripping and pouring water. 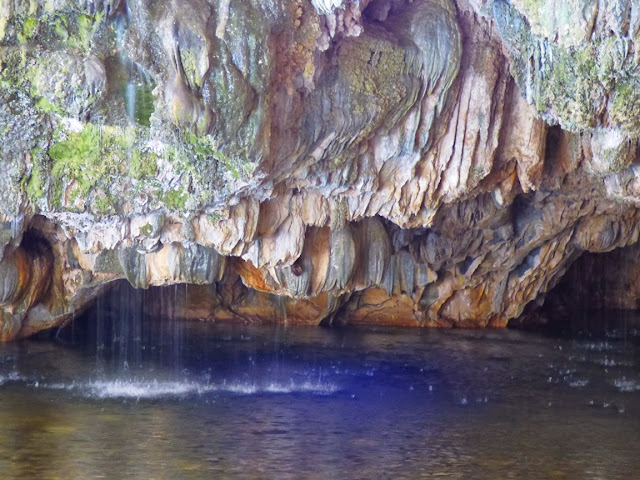 After exploring the upper cave, we made the somewhat more complicated trip downstream to see the lower bridge. There is a trail, but it climbs the south slope in a few seemingly illogical spots (although trying to bushwhack through the "shortcut" soon convinced us otherwise). 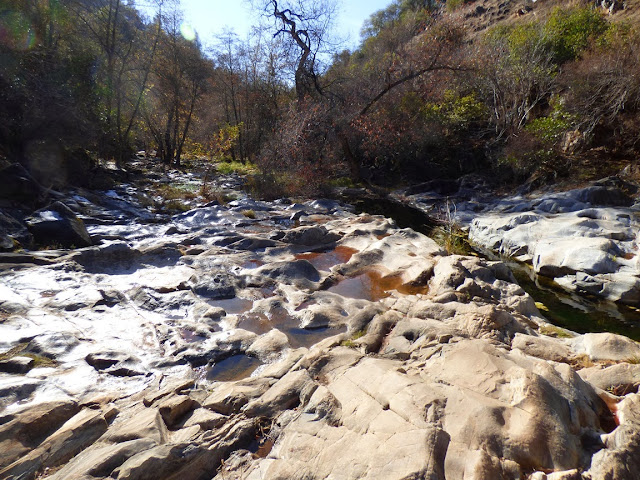 Around a third of a mile downstream, the lower bridge comes into view. Like the upper bridge, the water has ponded inside, requiring a swim or float to get through. There are rock ledges that provide dry access for some distance into the upper entrance. 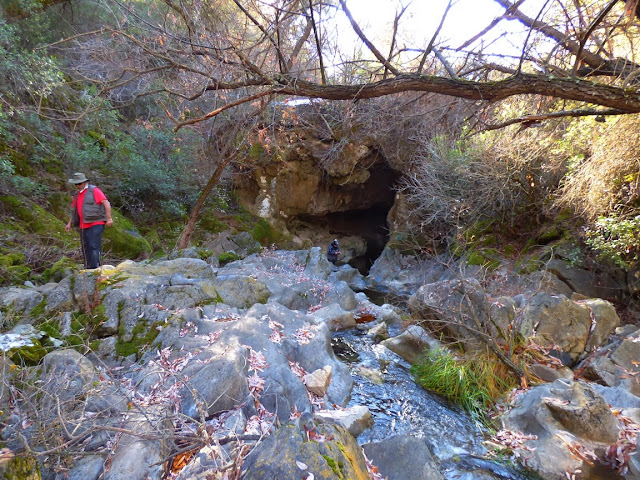 Both of the caves show the effects of decades of visitation and occasional examples of wanton vandalism, but plenty of features remain, especially those that are out of reach in the darkness above. Since the construction of New Melones Reservoir, the caves fall under the jurisdiction of the Bureau of Reclamation, so the caves have some degree of protection, and the area was free of trash and garbage when we visited. 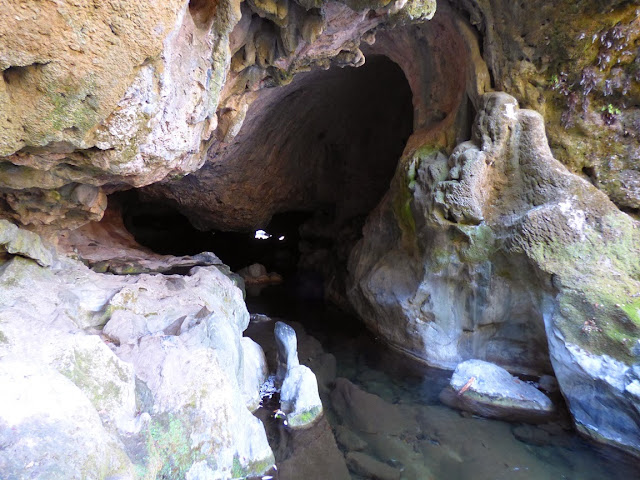 Maps and description of the trail can be found at http://www.usbr.gov/mp/ccao/newmelones/planning_visit.html#hiking. Parking is provided along an older route of Parrots Ferry Road a few miles north of the Gold Rush town of Columbia. It can also be accessed from Vallecito on Highway 4. There is a vault toilet at the trailhead, but not along the creek. The trail is particularly beautiful in the spring when the wildflowers bloom. 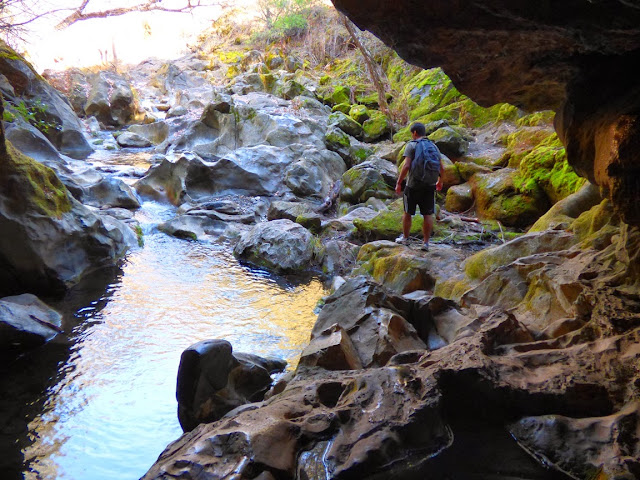 Beautiful! I understand people mined in these caves. Is that so?

Cool! I didn't know about the lower "bridge" when I visited here a couple years ago. Must go back now.

There was mining on the creek elsewhere, so I don't doubt they worked sediments in the caves as well.