Where the Sierra Nevada Rises From the Sea: Half Moon Bay 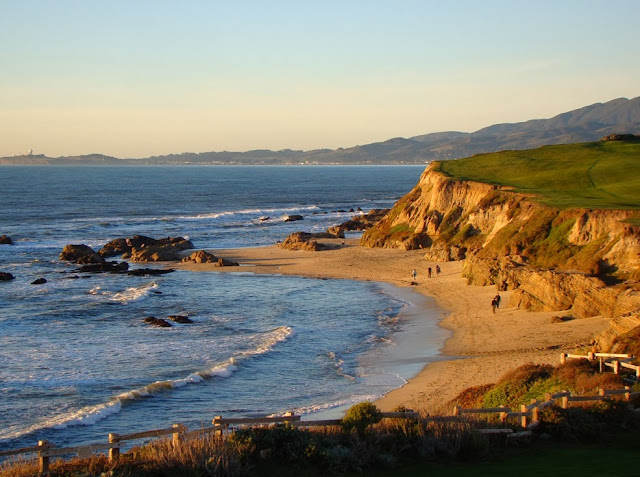 There was a time when the seas lapped against the Sierra Nevada foothills. Around 50 million years ago, the Great Valley was a shallow sea trapped between the western edge of the North American continent and a huge subduction zone that was carrying ocean crust, seafloor sediment and assorted volcanoes back into the crust and down into the mantle. The Sierra Nevada Mountains as we know them today didn't exist. At most there were low hills and a long slope that led to highlands in central Nevada. Vast rivers carried sediment into deltas and swamplands along the coastal complex. The resulting layer in the Sierra foothills is called the Ione Formation. It is related to the Domengine Formation found in the Coast Ranges along the west side of the valley. 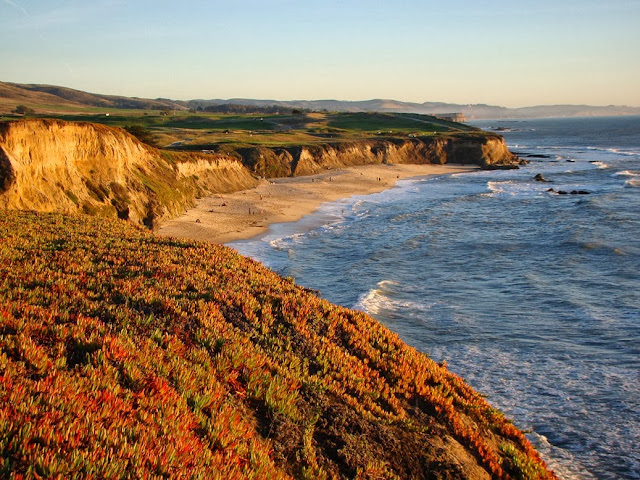 Half Moon Bay is a bit different than the other coastal regions we've visited in my little mini-series on the most beautiful coastline in the world, the stretch between Big Sur and Bodega Bay. The mountains above the coast at Half Moon Bay don't rise so abruptly as they do further to the south. I can look at the coastal terraces and low hills and imagine a scene that is reminiscent of the Sierra in the time of the Ione. Except for the jungles. There are no jungles here. The presence of coal seams and fossils of palm trees suggest that the Sierra Nevada looked more like the Yucatan Peninsula of Mexico than any place in California. Still, the hills above the coast have extensive exposures of Sierra granite that has been carried hundreds of miles northwest along the San Andreas fault over the last 20-30 million years. 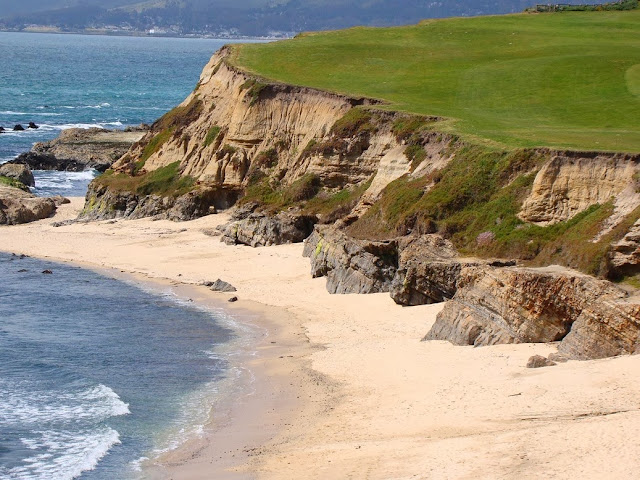 The fairly muted terrain along this stretch of coast displays some really fine examples of geologic structures and coastal erosion features. In the cliff shown in the picture above at Miramontes Point, one can see the tan colored gravels and sandstones of the coastal terrace, but underneath are tilted layers of the Purisima Formation, a gray silt-rich deposit. The Purisima was deposited as horizontal layers, but subsequent faulting and tectonic activity caused the rocks to be pushed and eroded before being covered by the terrace sediment. This type of contact is called an angular unconformity. 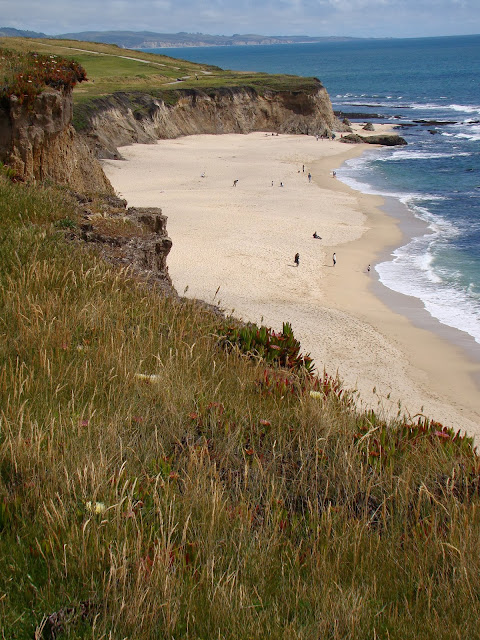 The most intense wave erosion in a beach environment is going to be directed at headlands, the rocky points that stick out into the sea. Conversely, the least wave action occurs within the protected coves. As a result, sandy beaches accumulate in the coves (as in the picture above, and sea stacks (small rocky islands) predominate just offshore of headlands (such as in the picture below at the Ritz-Carlton). 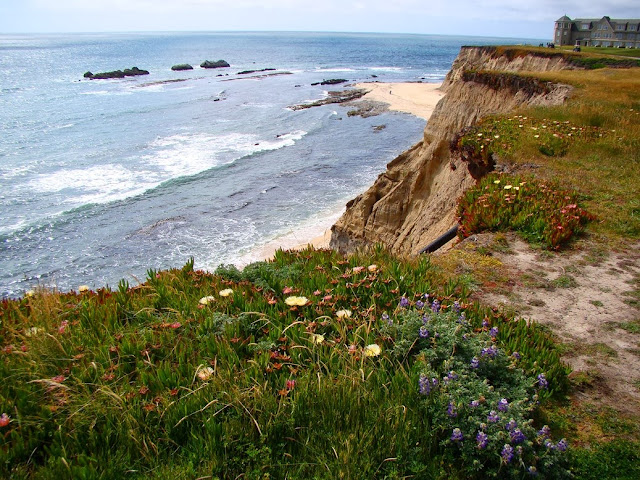 The Ritz-Carlton is a bit rich for my taste (~$500/night), but the beach is free by state law. It's a beautiful place to wander. 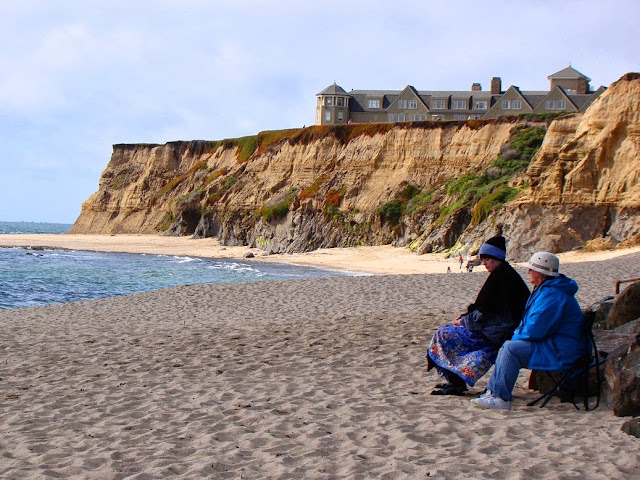 There are some nice tide pools in the bedrock exposures, and low tide brings many small discoveries. Snails, clams and octopi are related families within the phylum Mollusca. They are descended from a common ancestor that may have resembled the chiton, the creature with the segmented shell in the middle of the picture below. A chiton can be thought of as a snail with a flat segmented shell instead of a coiled shell. Or it could be thought of as a half clam, with just a top shell (and biologists everywhere want to yell at me now). 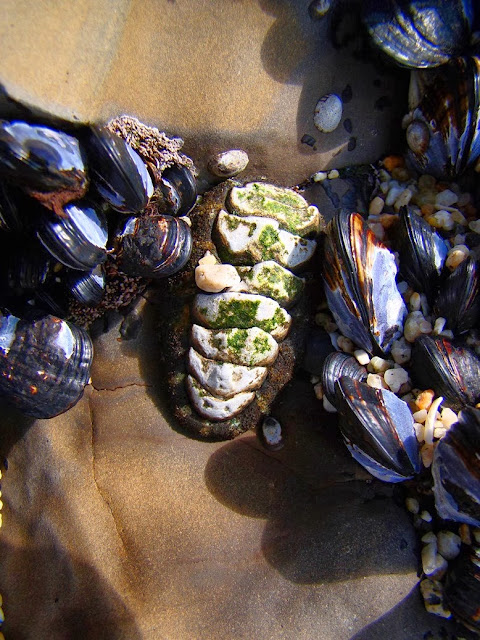 The terraces and sea cliffs of Half Moon Bay result from uplift along local faults that has raised former wave-cut benches out of the surf. In other words, waves once rolled across the flat areas at the top of the cliffs. Undercutting of the slopes by relentless wave action maintains the vertical cliffs and cliff retreat can measure in inches or feet per year (be careful how you site your beachcliff home!). 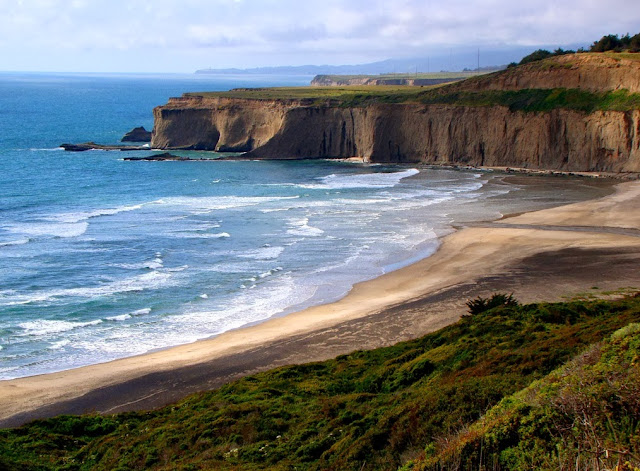 It isn't just the cliffs. The coastal lowlands just north of town have been suffering from wave erosion, and some shoreline roads have to be reinforced with riprap, large boulders used to absorb wave energy. We've watched severe storm waves splash on the front windows of one our favorite restaurants in the area. 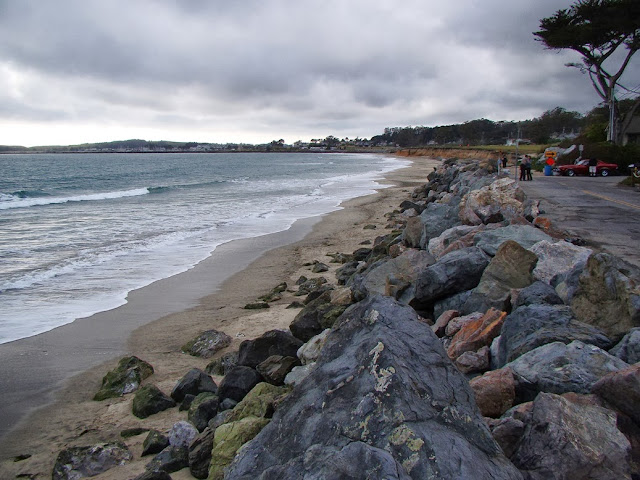 There is one other thing I would love to see some day in the Half Moon Bay region. One certain days of the year when the offshore storms are just right, the configuration of the seafloor off of Pillar Point (below) causes the production of monumental waves that can exceed 50 feet in height. The so-called Mavericks are legendary, and when they are crashing, a major surfing competition is organized. 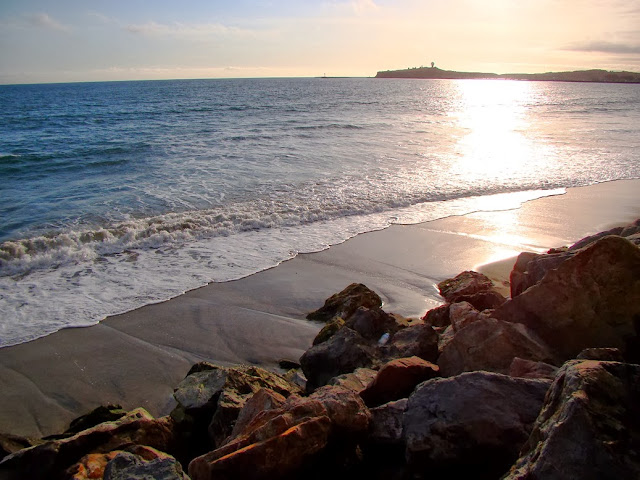