CREC, the Basin and Range, and Sunsets: On the Lower Colorado River 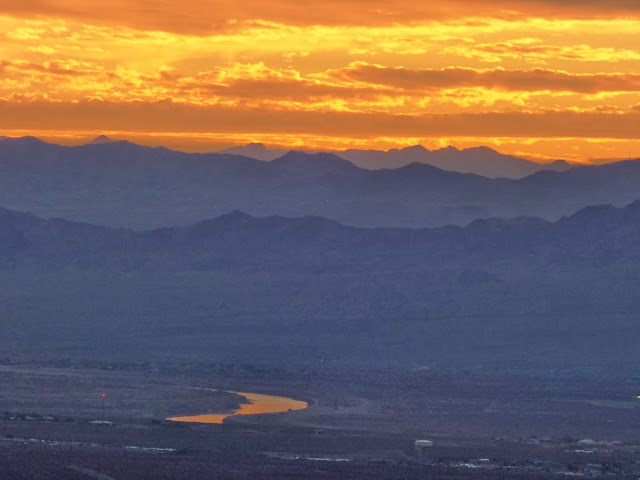 Although there is some geological discussion going on here, this series of photos is really an excuse to share an extraordinary sunset that I enjoyed yesterday evening. Sometimes a sunset is spectacular in its own right, no matter where one might be (my home in the Great Valley being a rare example). Sometimes, though, the landscape and the geological forces that produced it become part of the sky show. That's how it felt yesterday. 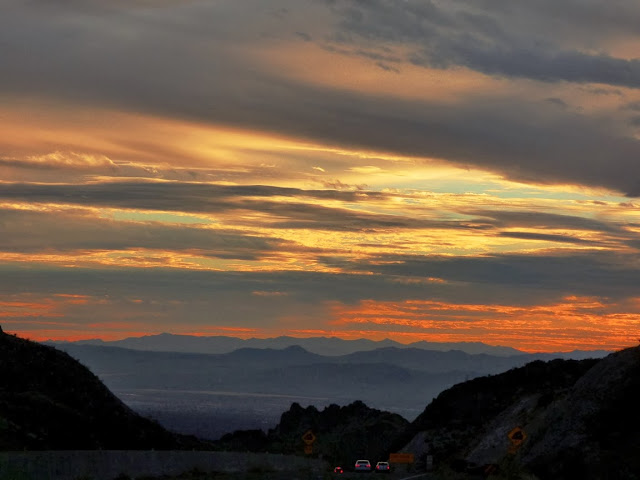 It had actually been a gloomy overcast day as we traveled from the Phoenix area to Laughlin, Nevada, with only a bit of sunshine breaking through now and then. Laughlin is of course the small casino strip that provides an alternative to Las Vegas. As a casino town it has the bright lights and giant billboards, but lacks the level of crime and grunge. It has very cheap but reasonably nice rooms ($24 on a weeknight!), and it sits on the shore of the Colorado River. I'm not like a lot of people...I didn't lose any quarters to the one armed bandits because we were there for the room, being a nice overnight break from the long drive home.

We came up from Phoenix on Highway 93 through Wickenburg and Kingman. From Kingman we headed west across Highway 68 through Golden Valley, and over Union Pass in the Black Mountains. We were not far from the edge of the Colorado Plateau (the Grand Wash Cliffs are north of Kingman), and were headed into the interior of the Basin and Range geological province. 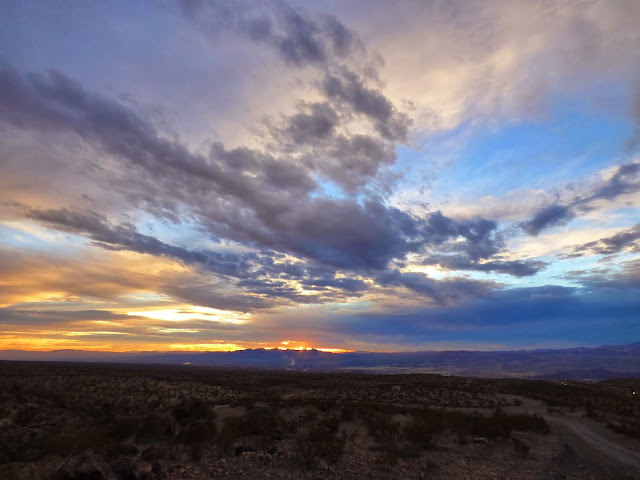 The Basin and Range is one of the larger geologic provinces of the United States, extending across all of Nevada, much of Arizona and Nevada, and the eastern part of California. It is a part of the Earth's crust that has been stretched quite literally to the breaking point. Hot upwelling mantle material had raised the landscape and stretched it not unlike the crust on a baking loaf of bread. The solid crust and upper mantle fractured and split, forming major systems of normal faults and near-horizontal detachment surfaces. The land broke into large mountain ranges (horsts) and deep fault valleys (grabens). Ancient river systems were broken up, and with the exception of the Colorado, no rivers flow out of the region to reach the sea. Most of the valleys are interior drainages, ending in playas (dry lakes).

The Colorado River is a strange one all on its own. The upper reaches of the river have been in place for tens of millions of years (dinosaurs may have roamed some of the most ancient canyon passages), but the gorge of the Grand Canyon has probably existed for no more than 6 million years (researchers are still arguing), and the passage to the sea in the Gulf of California for only 4 million years. There have been some wholesale changes in the pathway followed by the river, with the details a great mystery, although more is learned each year.

The valley of the Colorado River at Bullhead City and Laughlin is a heritage of the tectonics of the Basin and Range Province. The river did not carve the valley. It instead flows through a valley that developed from the extreme extensional faulting that formed this part of the province. The researchers in this region call it the Colorado River Extensional Corridor, or CREC. 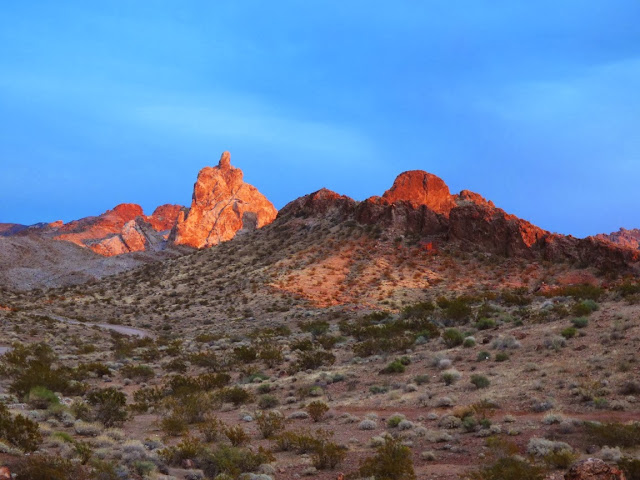 The upper mantle is a region in the Earth's interior a hundred or so miles down where it is hot enough to melt rock, except for the extreme pressure the prevents the melting from taking place. One of the consequences of extreme extension is that pressure is released on the upper mantle, and some partial melting occurs, forming bodies (or plutons) of hot magma. Volcanism is thus a constant geological phenomenon in areas of crustal extension. We were crossing the Black Mountains, which are mostly composed of exposures of ancient schist, gneiss and granite. But at Union Pass, there are numerous exposures of light colored rhyolite.

Rhyolite can be a violently explosive material depending on the gas content of the magma. One of the eruptions in the immediate region produced the Peach Springs Tuff, an ash layer that coated the landscape from Barstow California to Peach Springs Arizona, with around 150 cubic miles being extruded in one eruptive sequence. Numerous other eruptions rocked the region from about 16 to 19 million years ago (a new geologic map of the area was published this year if you want to take a look). 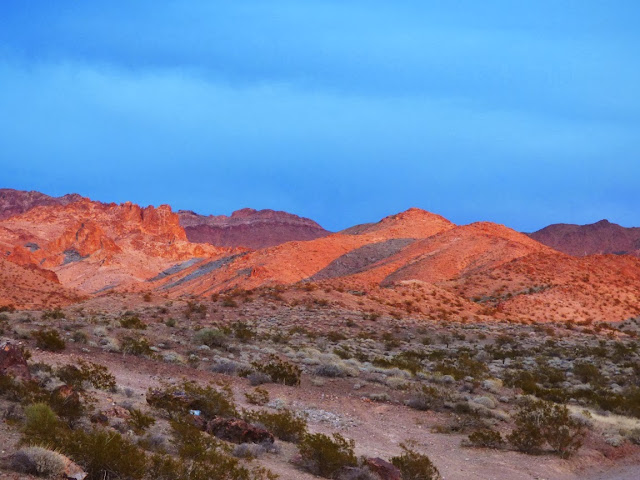 So what does the landscape have to do with beautiful sunsets? Maybe not much, but here are some ideas: the Basin and Range is a hard place to live. Behind the rain shadow of the Sierra Nevada and Peninsular Ranges of California, the region is the nation's driest. Aside from the aberration of Las Vegas, there are few large towns and consequently few sources of air pollution. The air masses that move across the region are constantly encountering mountain ranges and thus rise and fall, leading to instability of the wind currents. It's rare, I imagine, to see stratus clouds blanketing the region as they might do in flatter places. And finally, the high mountains provide a vantage point from which to see horizons that might be more than a hundred miles away. 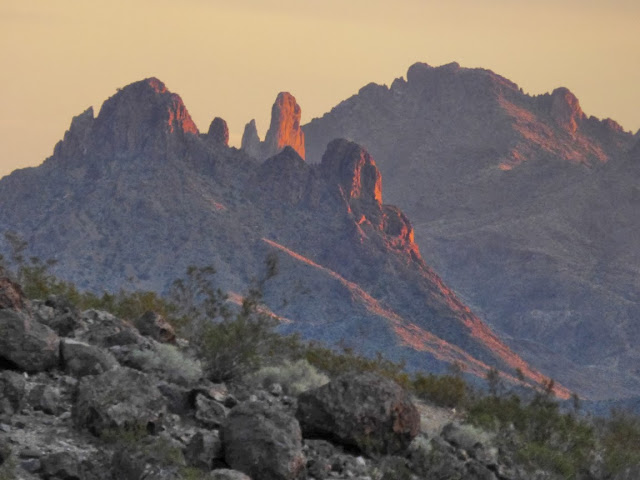 So it was that we came over Union Pass in the Black Mountains at the end of a long day, expecting more of the gloomy overcast that we had seen all day. That's not what we got. As we started down the long grade to the Colorado River, a sliver of sunlight broke through the clouds on the western horizon, and the rhyolite cliffs seemed to catch fire from within. 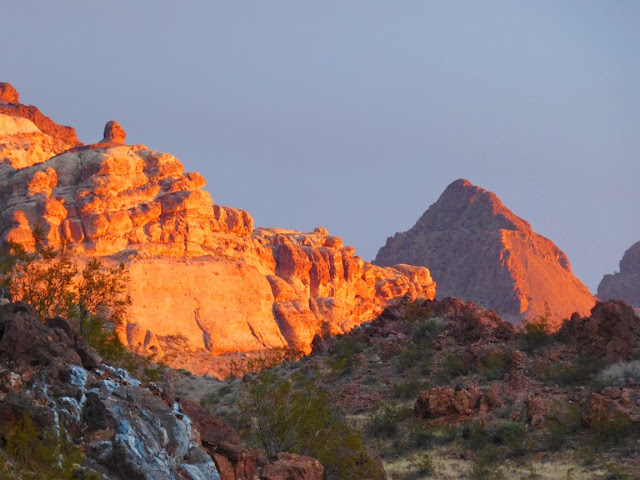 I found a gravel road on the south side of the highway and we climbed to the top of the ridge to catch the light show. For a few brief moments a sun pillar lit the sky across the valley from us (below). 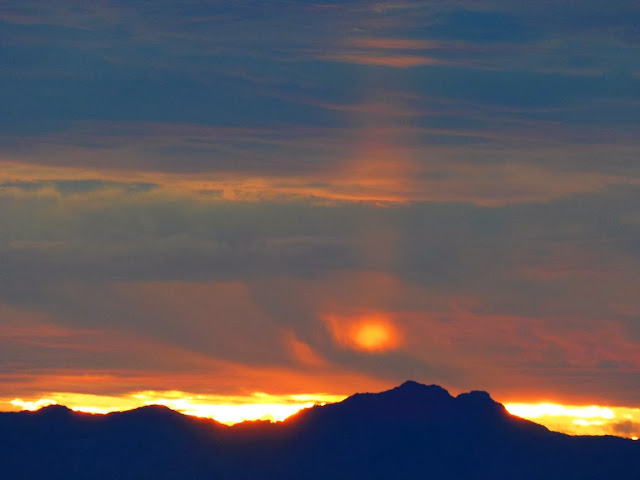 As the yellow and golden light faded, we got in the car and started down the highway, only to see the sky light up again in bright crimson and magenta. We stopped again in front of a new housing development on the highway. 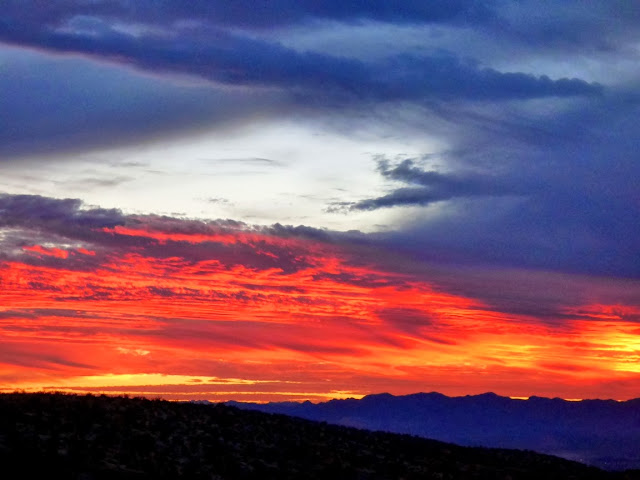 The colors were stunning. Even the locals were impressed; our waitress at dinner saw some of these pictures on my laptop and commented how gloriously the evening had ended. 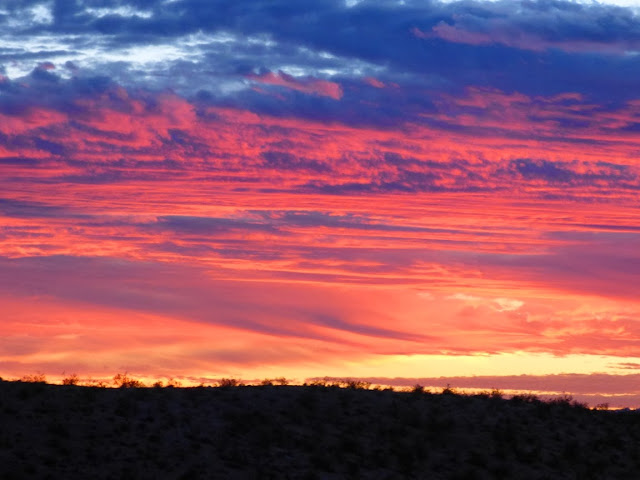 I used the zoom lens to concentrate on the most distant horizon, catching a sky that had seemingly caught fire. After a few moments the colors faded and we headed down the hill, back to habitations of humans. 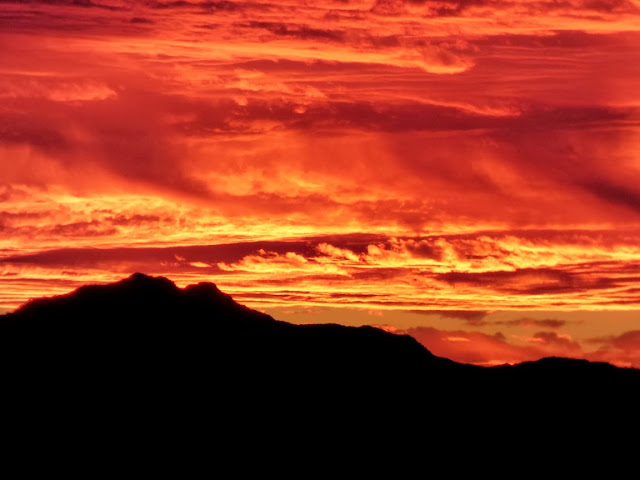 Views along there are marvelous. And Laughlin is an inexpensive place to stay. You weren't far from me in Wickenburg.