Here's a Totally Unfamiliar Sight: Some Call it the Golden Gate 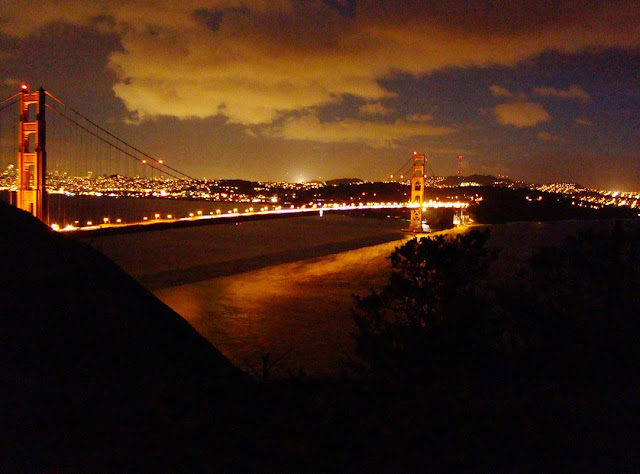 We are continuing our exploration of the most beautiful coastline in the world, the shoreline that runs from Big Sur to Bodega Bay. Today we'll have a look at one of the best-kept secrets of the entire state of California.

One of these times, you might find yourself in the city of San Francisco. It's a beautiful city built on a number of hills on the San Francisco Peninsula with a gorgeous stretch of beach, and a complex mix of rocks and sand dunes. If you do visit the city, try and take the time to seek out one of the unknown wonders of the city. As early as 1917, talk began of building a bridge across the opening of San Francisco Bay to the Marin Headlands. Much to the surprise of many visitors to the city, the bridge was actually built in 1937, providing a quick shortcut to the Sonoma/Napa Valley region, another part of California that no one has heard much about. 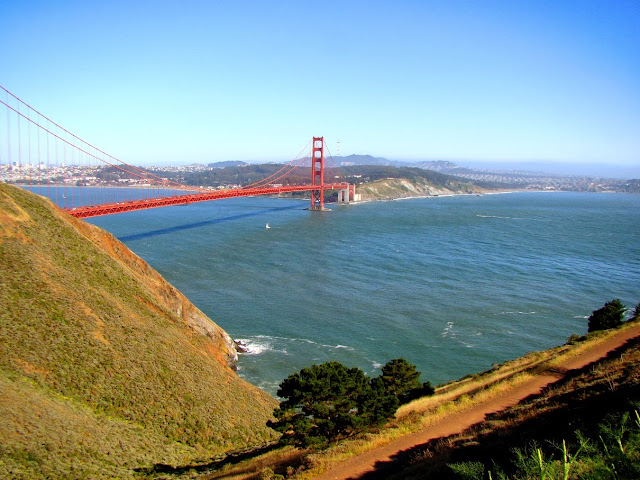 Locals call the span the Golden Gate Bridge. They try and keep it a secret from the tourists, fearing that it might get crowded and clogged by traffic. But if tourists are persistent, they can navigate their way through the back streets and find the bridge. Be aware that there will be people at one end collecting money from gullible drivers, insisting that they are simply charging a "toll" to use the bridge.
Oh, heck, I don't know how long I can drag this joke out. The bridge is only one of the most famous spans in the world and one of the most iconic symbols of California. Still it is a wonder to see, and I can't resist stopping whenever it comes into view. The setting is spectacular with steep coastal cliffs, the beautiful skyline of the City by the Bay, and the dark forests of the Presidio. When built, it had the longest span of any suspension bridge in the world at 4,200 feet, and is still the second longest in the United States. It rises nearly 250 feet above the waters of the Golden Gate. The two suspension towers are 746 feet high. A small army of thirty eight painters works continuously to protect corrosion-prone surfaces. And then there is the fascinating geology...
San Francisco Bay is one of only two natural harbors along the California coast, and for two centuries has been a critical transportation and trade corridor for the state. Rivers that drain 40% of the state of California flow into the bay. It originated only 8,000 years ago as the last major ice age ended and sea level rose to flood the lower Sacramento River Valley (There were no doubt previous incarnations of the bay during earlier interglacial periods). During the ice advances sea level would drop three hundred feet or more, and the Sacramento River would flow to a delta near the Farallon Islands more than twenty miles offshore. Despite the urbanization, the bay is one of the most important estuary-wetland environments on the entire west coast of North America. 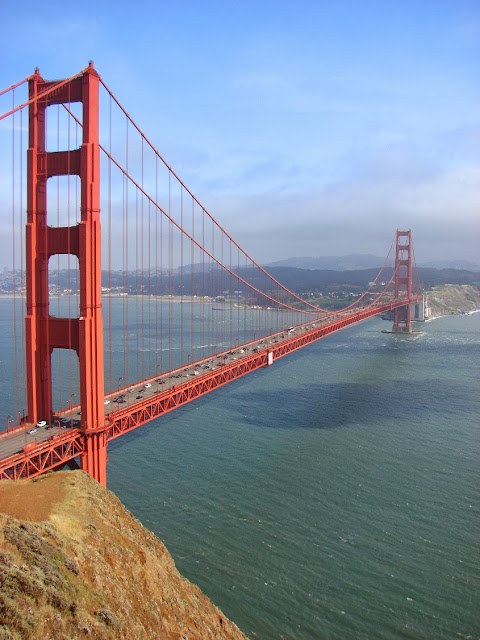 Several important fault systems cut across the Bay Area, including the well-known San Andreas, but also the less familiar Hayward, San Gregorio, Calaveras and many others. The proximity of these faults to the bridge is cause for some concern to the engineers who desire that the bridge would survive a major seismic event (retrofits have recently been completed). Part of the problem is the that the southern abutment is situated in serpentinite, a notoriously unstable rock (the cliff just visible on the right of the picture above is Baker Beach, which is made up of numerous landslide blocks).
The geology is incredibly complicated. The hills are composed of exotic terranes in the Franciscan Complex, bits and pieces of continental and oceanic crust that were carried hundreds or thousands of miles from their point of origin and accreted to the western edge of North America along a vast subduction zone. The subduction zone changed to a transform plate boundary (lateral movement along the San Andreas fault) only in the last few tens of millions of years.

The rugged cliffs of the Marin Headlands (seen in the picture below from Fort Point) will be the subject of a follow-up post soon, but in short they are made of a complex mix of ocean floor basalt and reddish chert, a quartz-rich sedimentary rock that formed originally on the sea floor as diatomite. The diatomite was composed of trillions of microscope shells of one-celled creatures called (you guessed it) diatoms. The rock forms a solid foundation for the northern bridge abutment. 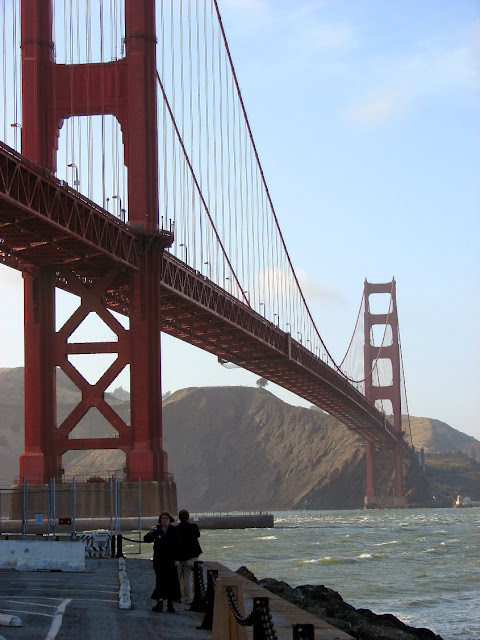 As mentioned already, the foundation of the southern abutment is in serpentinite, a far less stable rock (seen below from Baker Beach). You can see the landslides on the right side of the picture. I probably had a chance of being arrested the day I took the picture. It was September 15, 2001, just a few days after the tragedy of the Twin Towers and Flight 93. We were on a field trip with the National Association of Geoscience Teachers that had almost been cancelled. Airlines were not yet flying, and security around iconic symbols around the country was very tight. I imagine that if we had wandered closer to the base of the bridge there would have been trouble, or at least some very pointed questions from the California Highway Patrol. 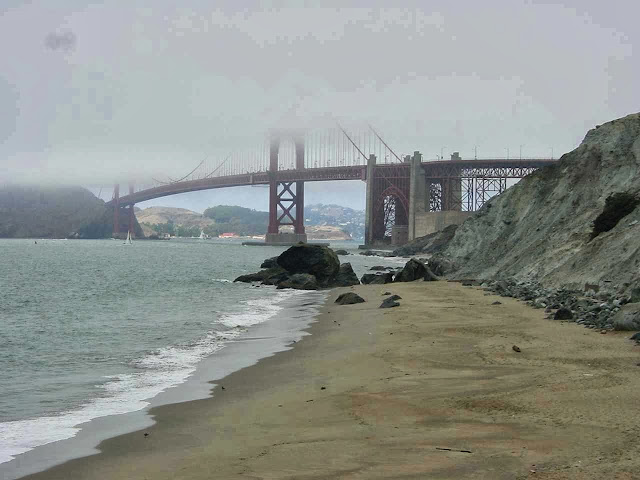 Fascinating. I happened across this by accident and find a blog describing the rocks of Steinmans trinity as it ed called when I was at school in England. Just sounds like the ophiolite of Anglesey in Wales.
I look forward to seeing American serpentine when I make my first ever visit summer 2014

Thanks for stopping by! I hope you have a wonderful trip (and check out Yosemite National Park if you get the chance).

I can see the bridge from my place in San Francisco, and even though I see it everyday it still amazes me. Another good place to get great views of the bay area is Mount Davidson. It is the highest point in San Francisco and has great views.

Haven't seen 'the bridge' in many years. Not sure I'd want to drive over it now knowing about the soft serpentine end.

That is FANTAStic. SUPER interesting to me. Part of what made my summer complex was sussing out the different populations of anadromous fish who swim to sea through the bay, some (in project area) from creeks draining into Grizzly Bay, others that live in the Sacramento River. That all goes back to geology re: where creeks and rivers and bays are & how they connect.

ALSO, I'm kind of a nut job for serpentine rock and know from my NPS days that serpentine rock is a difficult environment for plants, so it can host some unusual specialists that have adapted to it, so they live in very specific little pockets where that rock is exposed. I need to take another look at Baker Beach! =) LOVE this POST. Thank you.

Thanks all! Biobabbler, I am also interested in the biology of the serpentine soils. I especially was fascinated by the discovery of a SINGLE plant of the manzanita species that was thought to be extinct (I think they said it was in a street median or something, no less)