Inside the Biggest Cavern Opening in California: Moaning Caverns in the Sierra Nevada Foothills 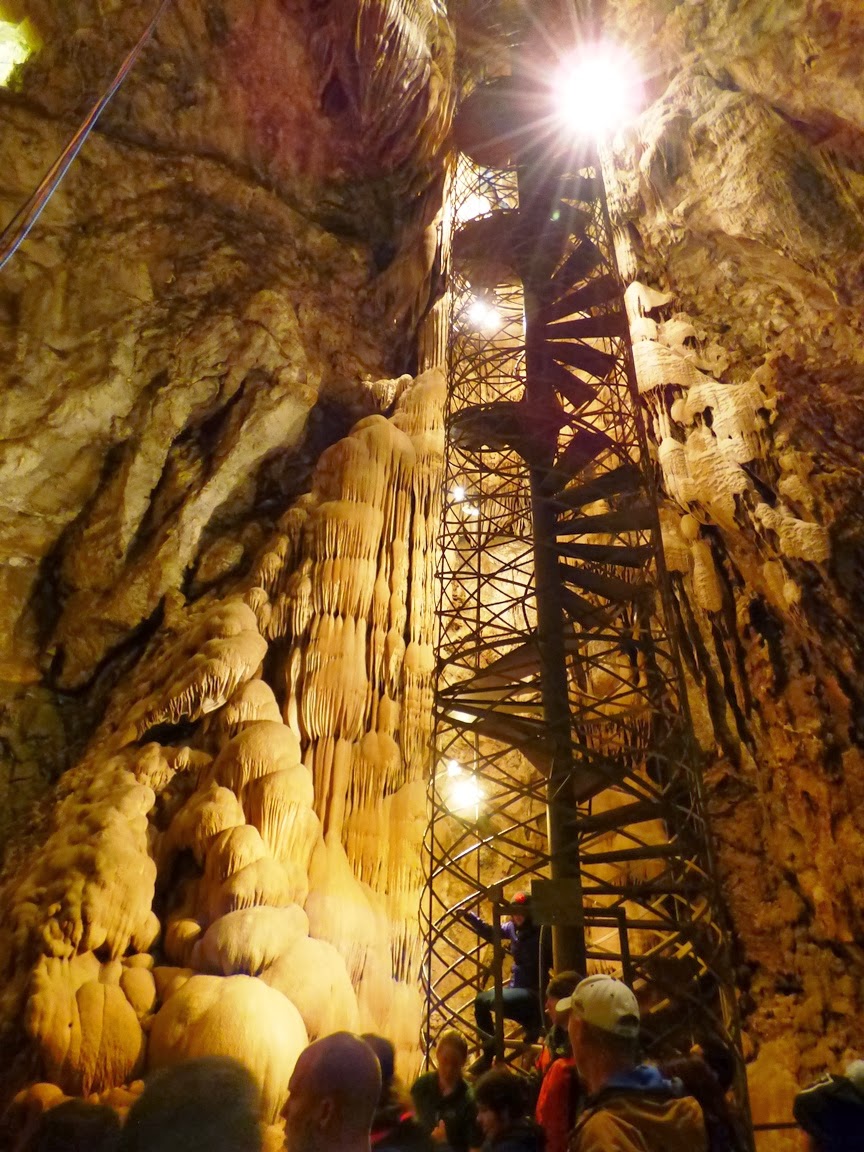 Yes, I had another field trip today! It was less academic then some, as it was a Geology Club tour, but learning was part of the experience. We headed into the Sierra Nevada foothills to check out some karst topography, visiting Moaning Caverns, and exploring Natural Bridges at New Melones Reservoir. I'll cover the Natural Bridges in a separate post later on.

Moaning Caverns has one overwhelming distinction: it has the largest underground opening in California. The 180 foot tall main room could actually fit the Statue of Liberty (but good luck getting it through the narrow cave opening)! There are other interesting features, but size is everything here. I've been to Carlsbad Cavern, and it is in a class by itself, but I've also been in many caves in California, and none has a room to match this one. 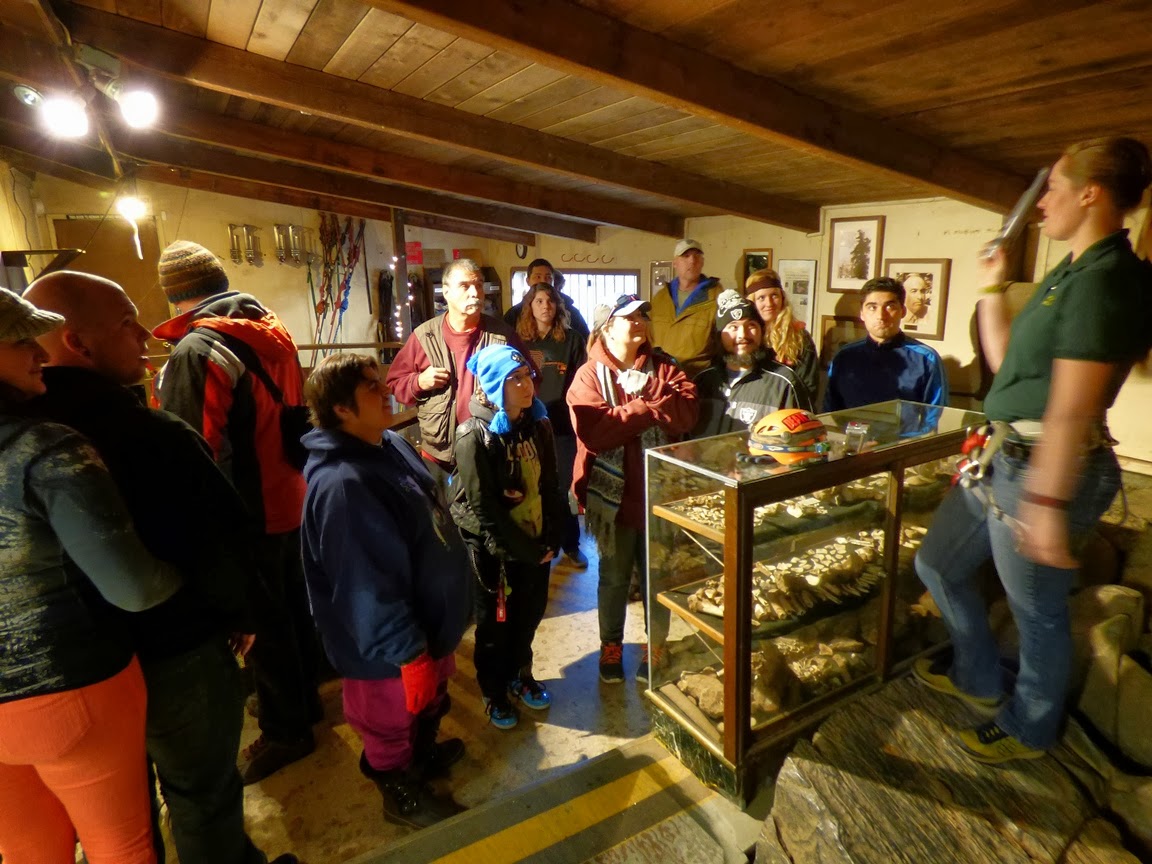 I'm proud to say that one of our geology majors served as our guide at the cave tour today. She did herself proud. The tour starts around the historical cavern entrance, and it wasn't a historically great place to discover a cave: it has a vertical drop that with a few wall collisions totals around 170 feet (the guides call it the 7-second tour). Animals and humans have stumbled into the cave many times in the past, and many bones have been discovered in the bottom, including a human skull said to be 12,000 years old (I'll have to ask some anthropologists for a judgement on that one). Some of the bones are displayed in the glass cabinet in the picture above. 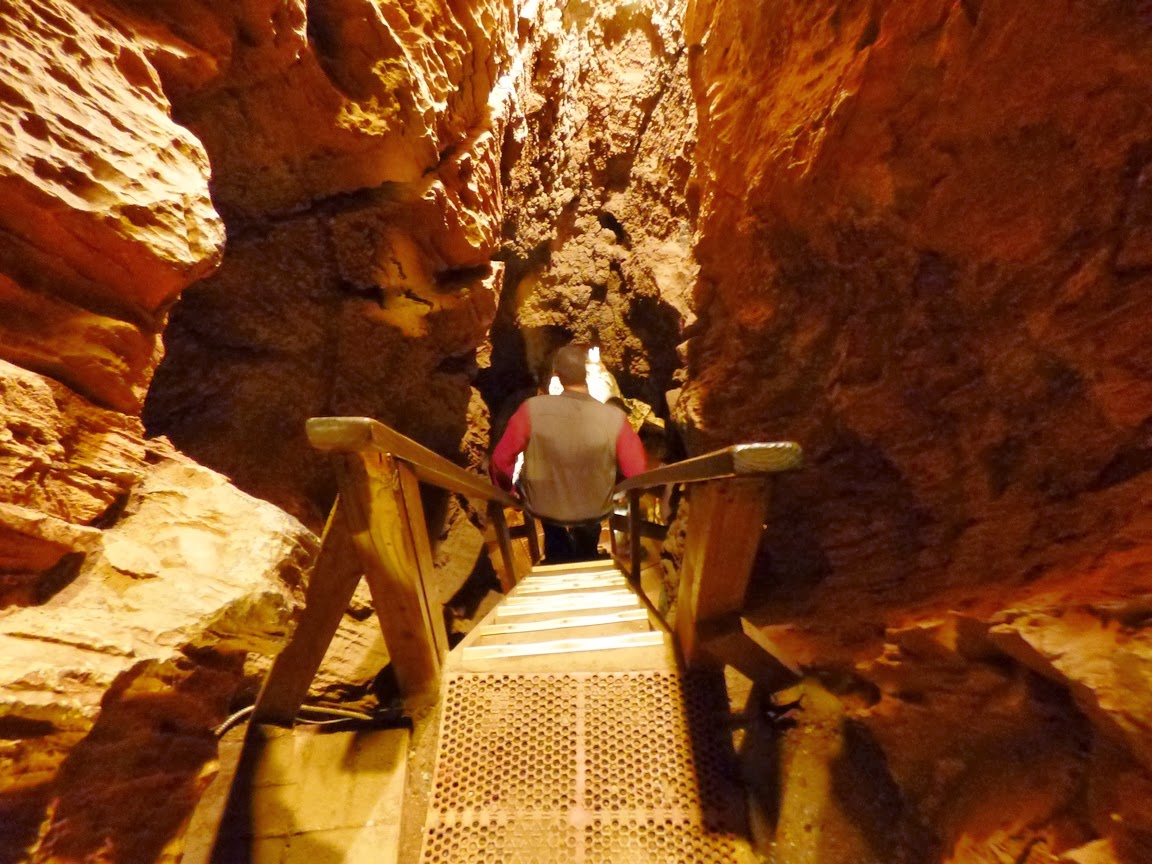 The cavern has been known for a century or more, and tours have been offered since the 1920s. The difficulty of the original entry has been circumvented by blasting a narrow passageway and the installation of stairs. Lots of stairs. I've been exercising a lot in recent weeks and yet my legs were rubbery by the time I got to the top! 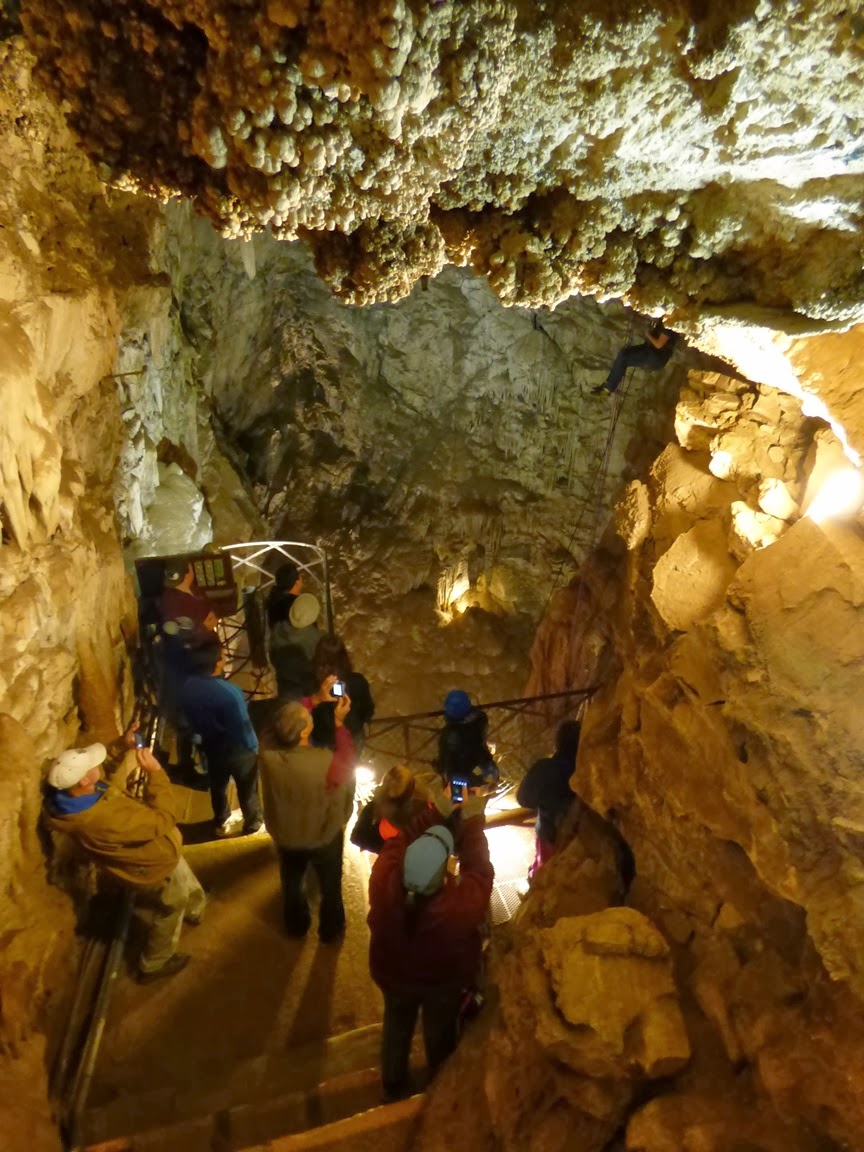 The base of the stairwell is a platform that allows a view down into the main room. It's hard to get a true perspective of the size, and our guide pointed out that features we thought were a few tens of feet away were actually more than a hundred. 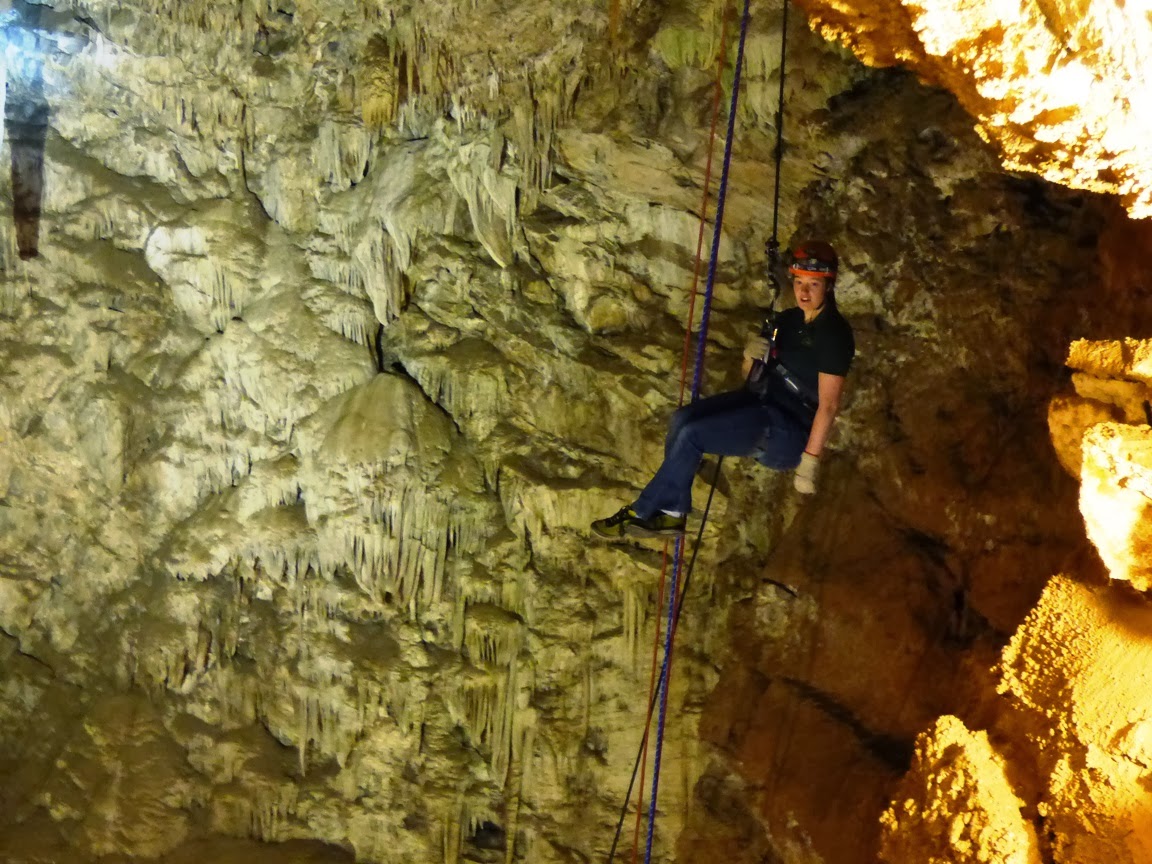 It's kind of fun to have our guide narrate the tour while dangling from a rope a hundred feet above the base of the main room. Serena displayed a flair for the dramatic! We tourists took the alternate route, a circular stairway 100 feet high that was welded from fragments of a World War I battleship in about 1922. What's more scary, a 165 foot rappel, or trusting a ninety year old iron stairwell that has been in a humid environment the whole time? 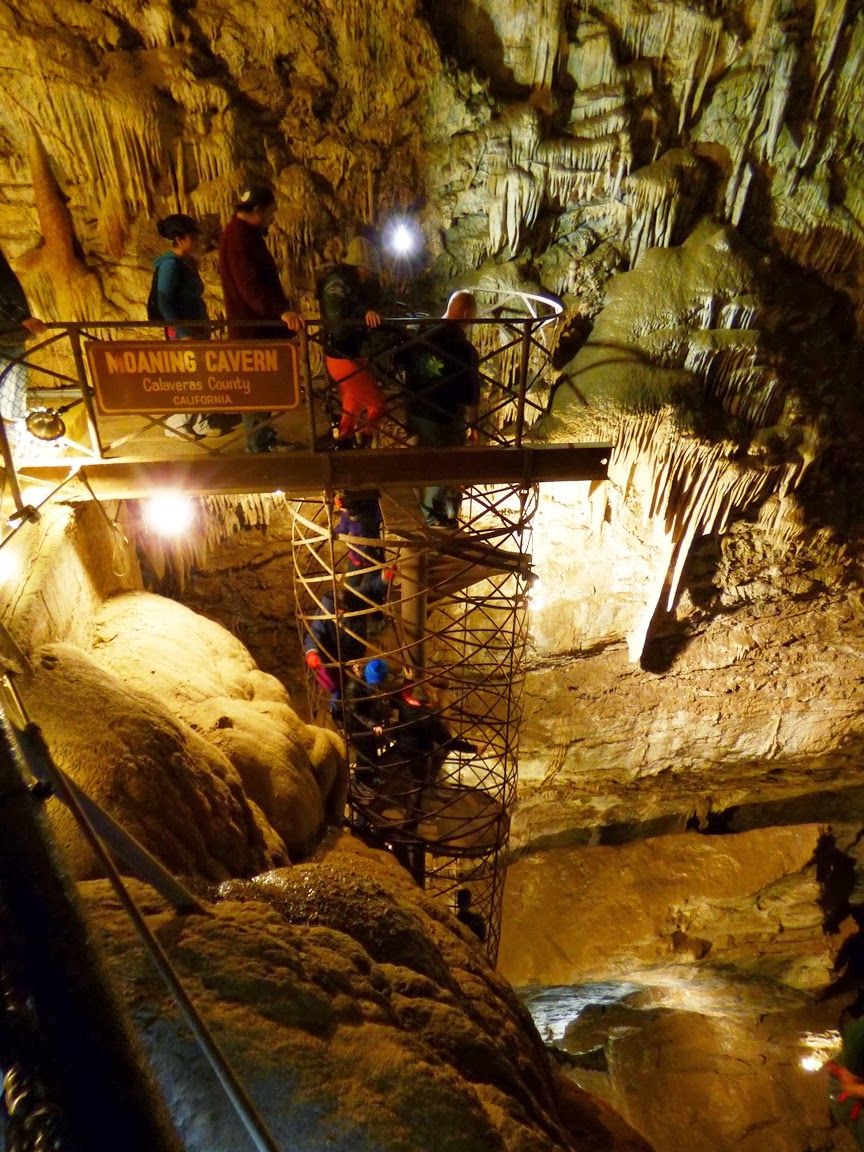 It's a thrill ride either way!
From the bottom of the stair, we could look up at some of the excellent speleothems (cave decorations). There was a twenty or thirty foot high stalagmite... 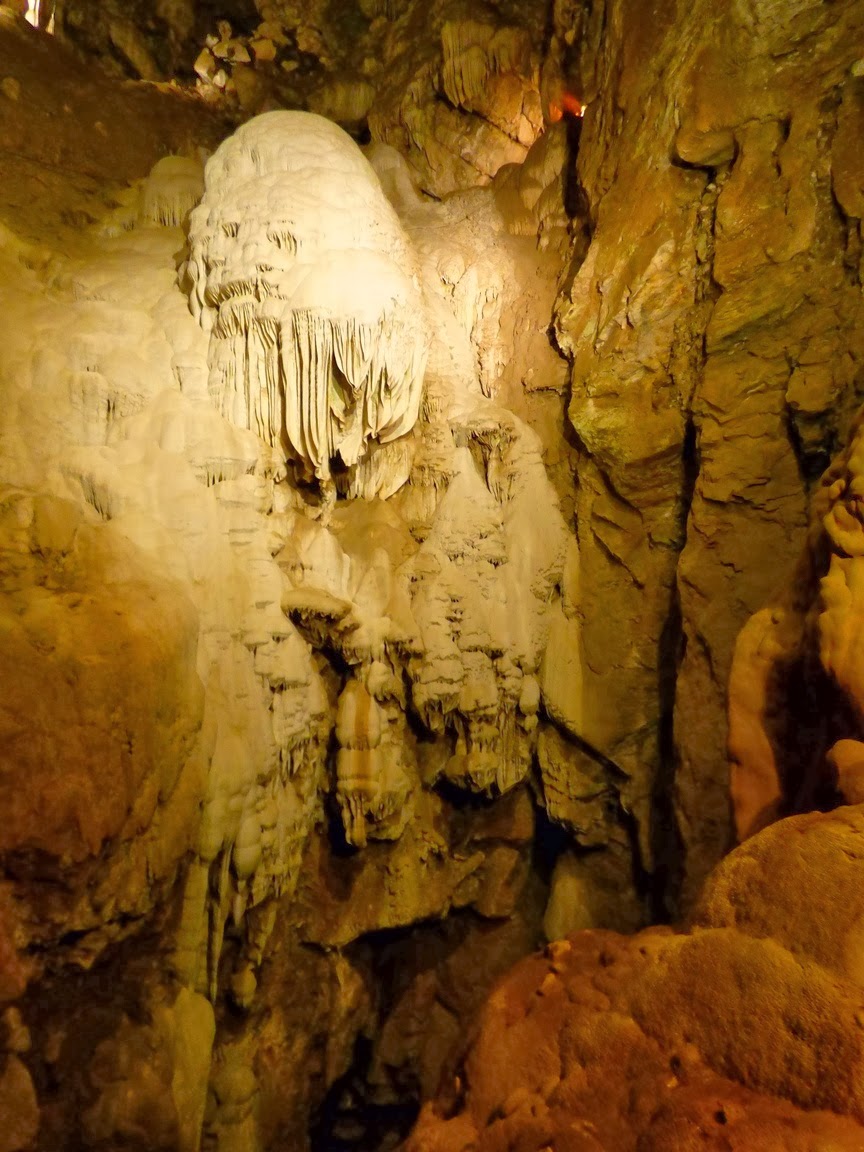 And an IMMENSE flowstone feature called the Chocolate Fall. I've never seen anything like quite like it anywhere else. It seemed to extend halfway up the wall of the main room. 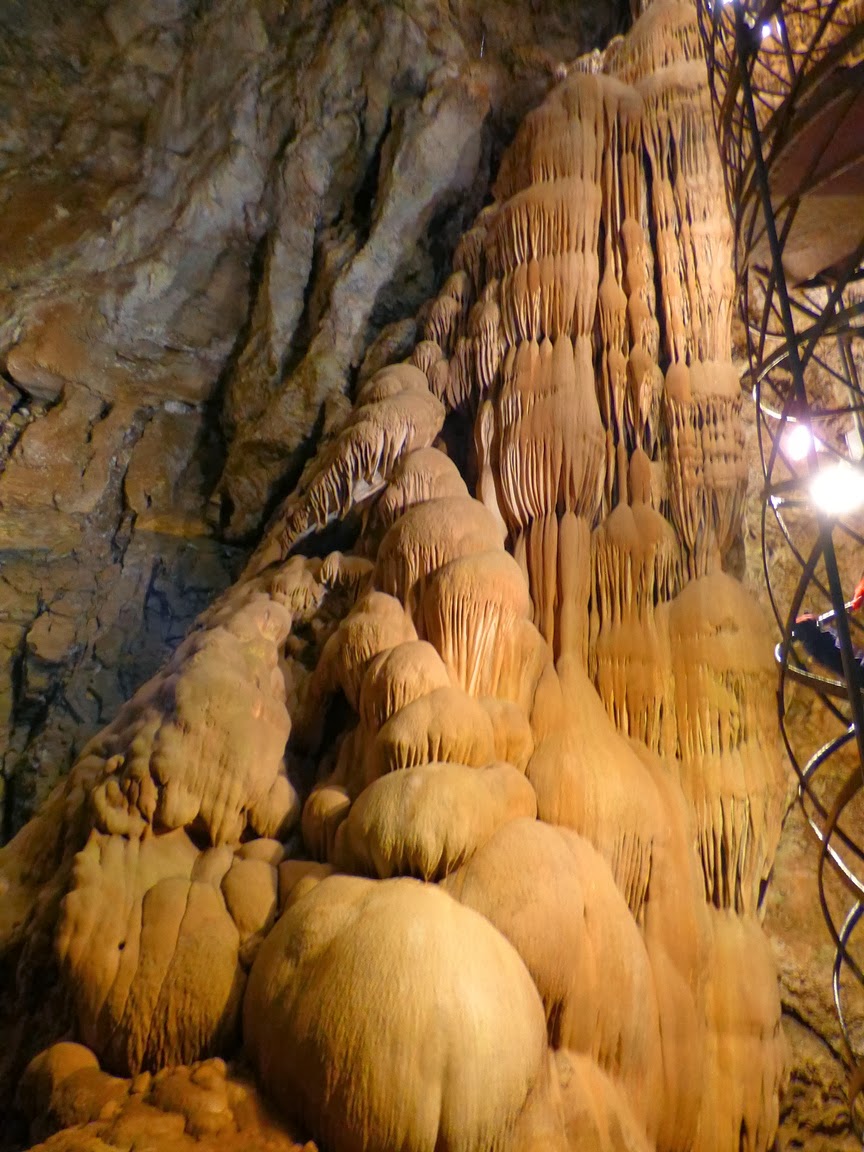 It is very difficult to discern the scale of the room in a photograph. Below, you can see the stalagmite and Chocolate Fall in comparison to the circular stairwell. 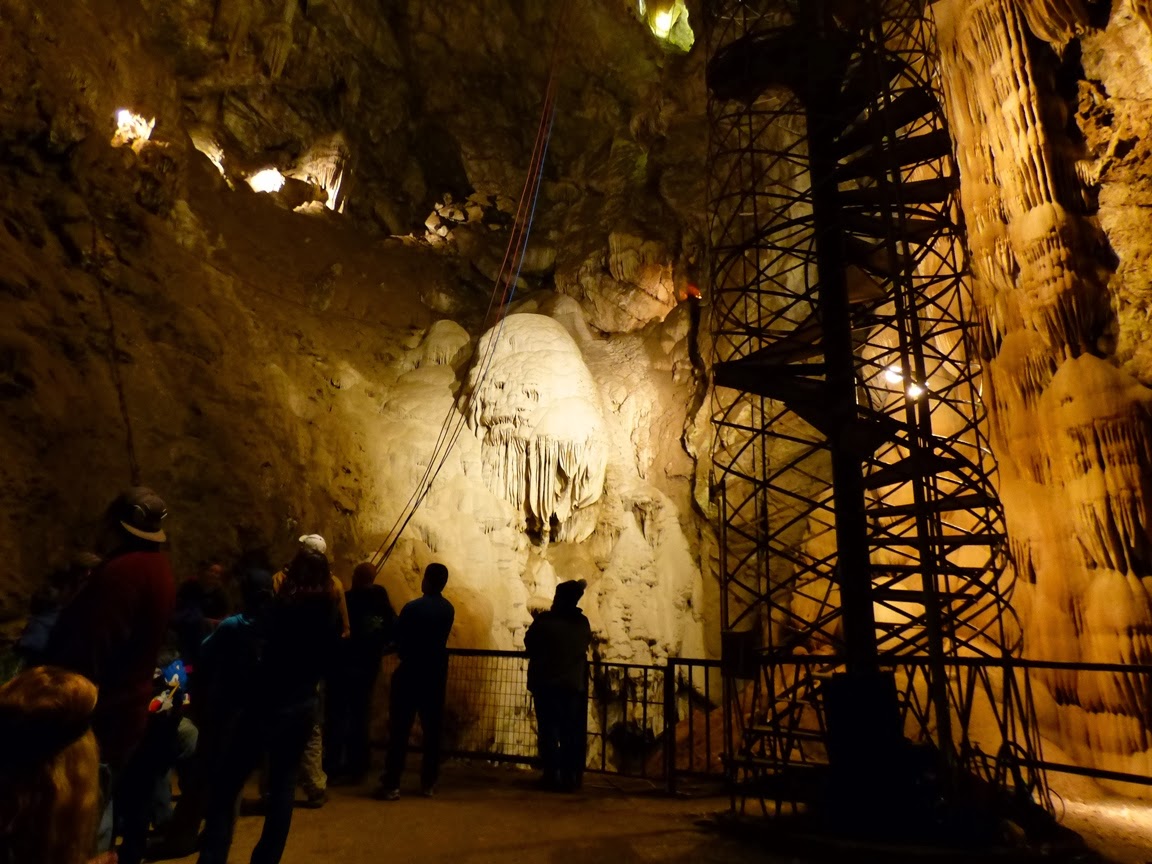 And here is a shot from near the top of the circular stairwell, looking straight down. Those little dots are some of my students still exploring the bottom of the cave. 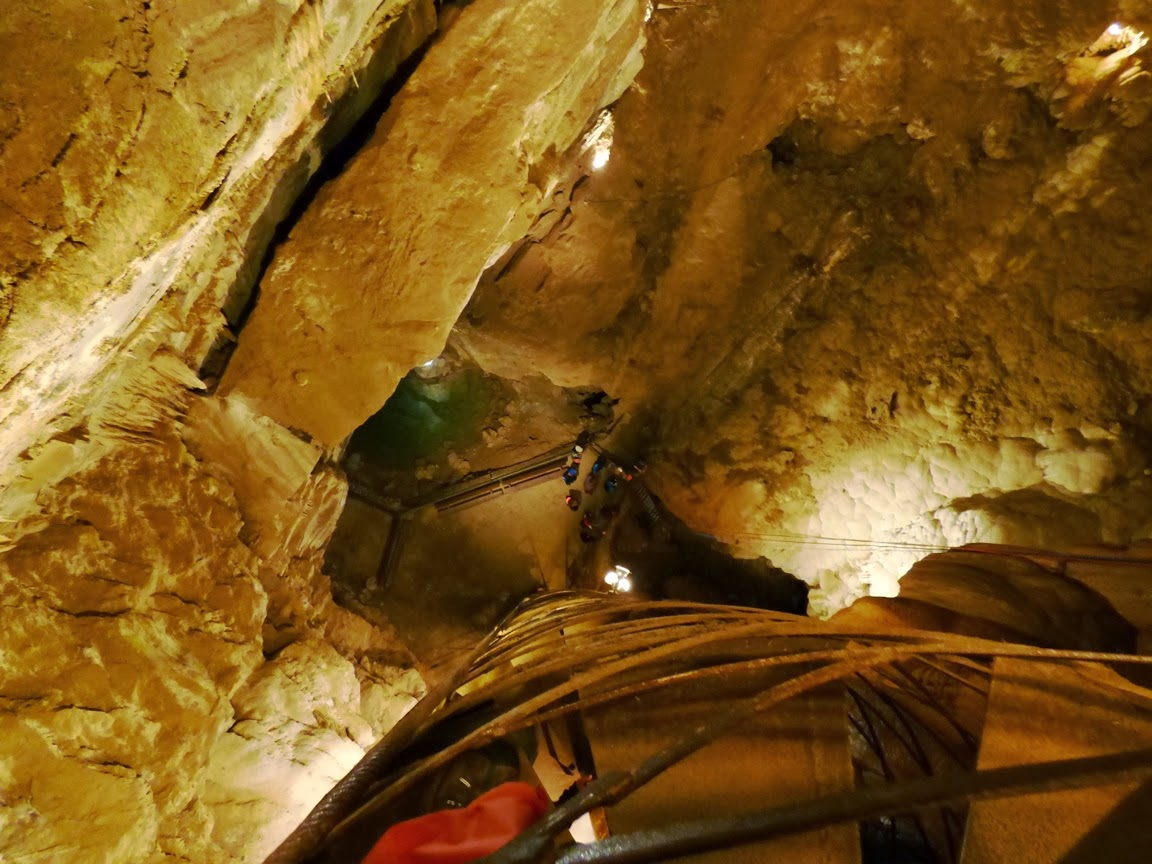 Moaning Caverns offers a standard walking tour (what we did), and a more extended adventure tour that explores additional rooms below and around the main chamber. Some lower passages haven't been explored in years. The vertical nature of the cave means that carbon dioxide can accumulate to dangerous levels in the deepest portions.

One can also rappel. Um, no thanks, I'll take a rain check.

The owners of the caves are quite decent about providing discounts for student groups. They can be contacted at http://www.caverntours.com/MoCavRt.htm. 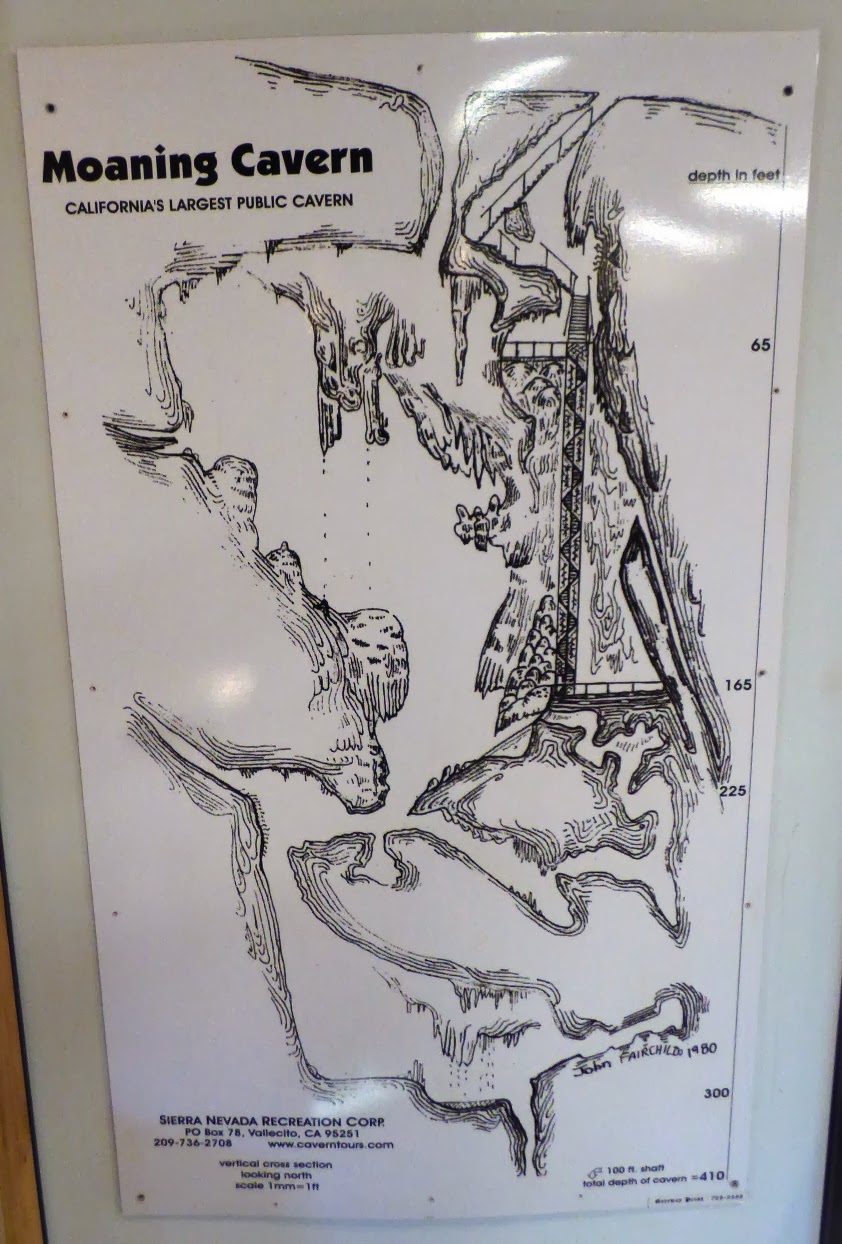 Next, an adventure in the Natural Bridges...

PS: "Moaning"? I didn't talk about the name, did I? They say today that it is from the particular way that dripping water echoes off some of the rocks, but I remember hearing (this isn't hearsay at all!) that the pressure differences caused a very strong airflow through the original entrance that would whistle and moan like a ghost. The development of the cave nearly a century ago destroyed the effect.
Posted by Garry Hayes at 10:31 PM

Have always wanted to repel into this cave. Easier than the stairs I think. What a beauty.

You just have way too much fun! Love your blog.

More than 30 years ago my daughter and I took the walking tour of Moaning Cavern. When it was over our legs were rubbery and it was one of the most fantastic experiences the two of us have shared over time. The cave is the inspiration for a scene in a book that I am writing. Reading your comments made me realize what a profound and enduring memory our experience left in my brain. I was back there in a second, rubbery legs and all. Thank you for your informative post.