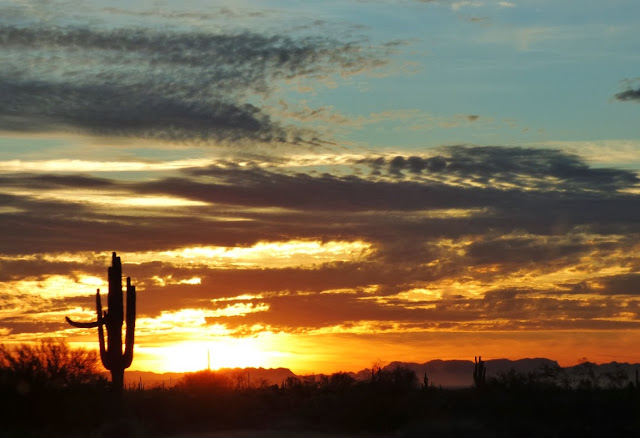 Some places I don't know very well in the geological sense, and this makes no sense, because I've been in Phoenix a lot over the years. Oh, I glance at the guidebooks, but invariably my brother will get up and say "let's go explore (fill in a feature in any direction from Phoenix)", and it will be some corner of the landscape I've never seen or read about. And so it was that we headed southeast last week towards the towns of Superior and Miami. The legendary Superstition Mountains rose to the north, and we ended up driving through the heart of the Pinal Mountains. 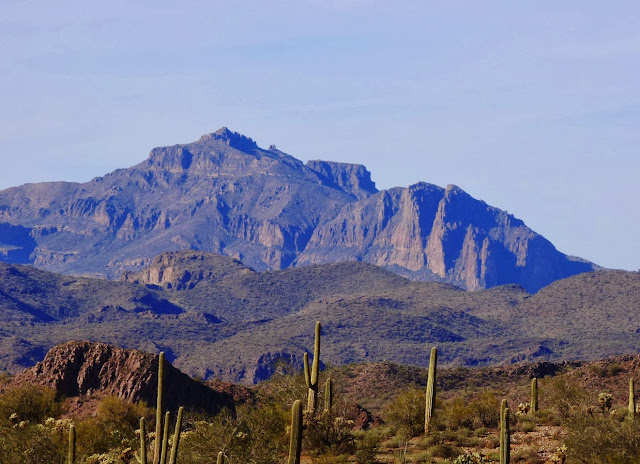 The Superstitions are the home of the Lost Dutchman Mine, which was not exactly lost, and no Dutchman was associated with it, but people look for it anyway. I have a strong feeling that it was found a long time ago, and was mined under a different name with no one the wiser. There wasn't a lot of mineralization up high in the mountains, but a fair amount around the margins, and those areas were exploited a long time ago.

Copper was another story. Vast deposits have been found throughout the area, and Superior, Miami and Globe grew with the mines. I liked the street sign in downtown Superior (below). Magma was the name of one of the mines in the area. Still, it would be nice to see more geologically themed street names in my local town... 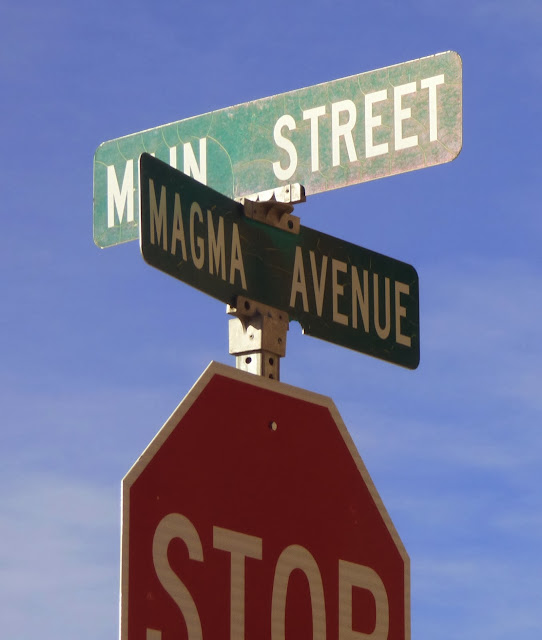 We drove east of Superior into the Pinal Mountains and soon encountered some very rugged territory. Although I was ignorant of the fine details, I quickly recognized that we were in the vicinity of some heavy-duty Neogene rhyolite calderas (that's "supervolcanoes" for the Discovery Channel writers). There were at least five calderas in the region. Each one was capable of producing massive explosive eruptions of hot ash in volumes exceeding 100 cubic miles. The pink rocks forming the cliffs around us are called rhyolite tuff which formed when the hot ash hit the ground and re-melted, but quickly cooled and solidified into rock. 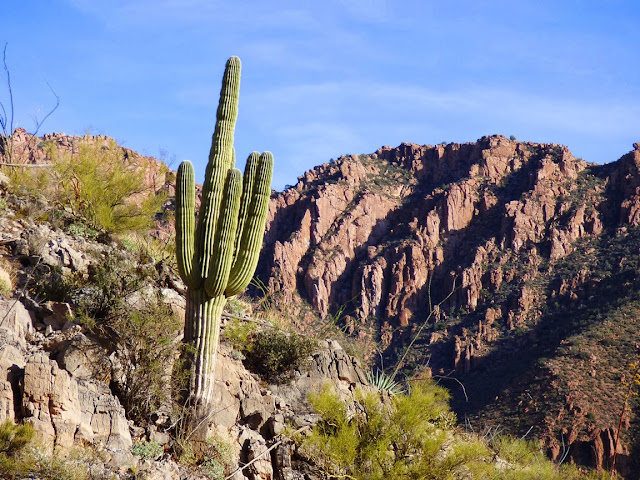 I never get tired of photographing the saguaro cacti that are endemic to this region of Arizona. They seem to have unique personalities, if plants can have personalities. 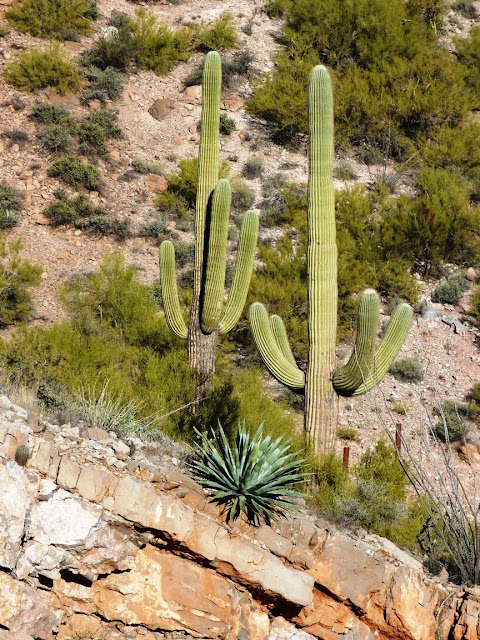 The pinnacles of rock formed as the ash cooled and contracted. The ash flow had to shrink and so formed myriads of fractures, often at angles of about 120 degrees. The fractures provided avenues for water to get in and weather out the rock, often by freezing and expanding. 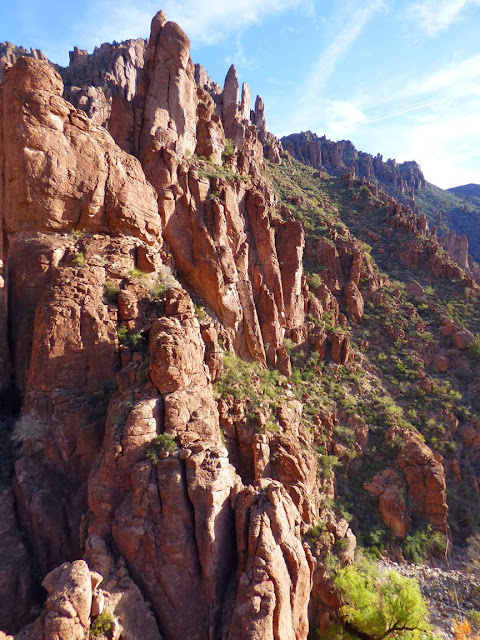 The towering pinnacles are sometimes called hoodoos. The slopes are exceedingly rugged, and the highway required a tunnel to get through the narrowest part of the gorge. 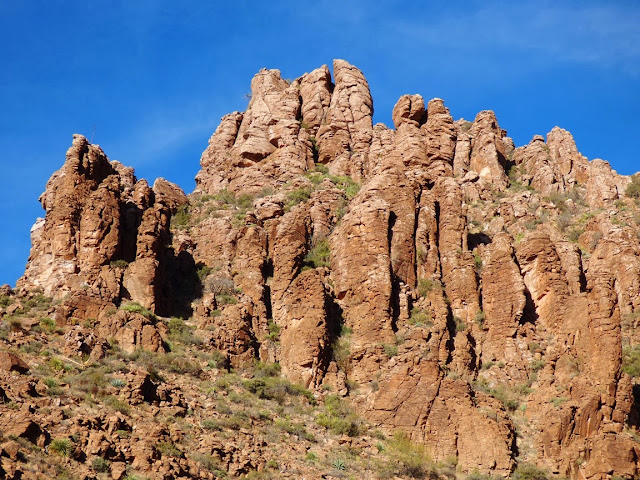 We took a deserted back road to try and get a view down into the Pinto Valley Mine, one of the region's gigantic open-pit copper mines. We only got a partial view of the upper terraces. Operations have restarted in the last year or two, with copper and molybdenum as the main products. 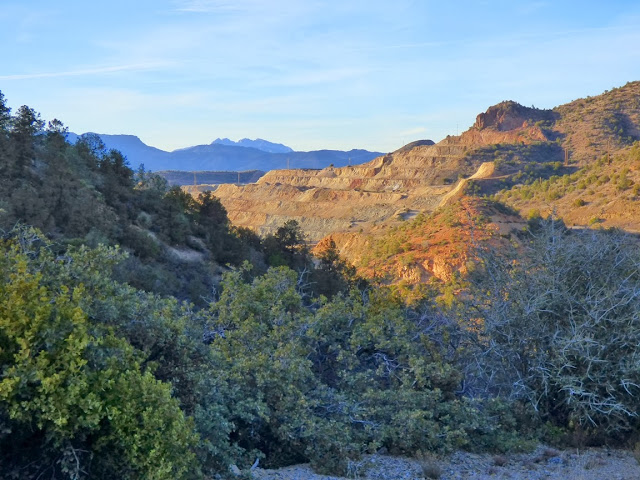 And then there were the skies over our heads. The clouds were diverse, with a beautiful band of mare's tails off to the west. It looked like sunset would be interesting... 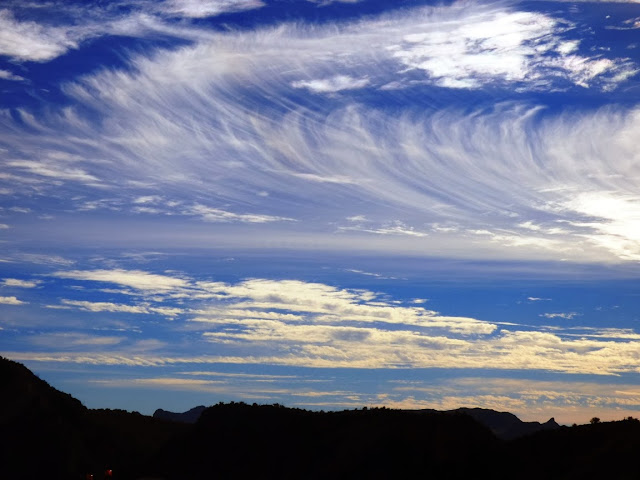 It's winter, so ice crystals make up the clouds. When the sun hits the crystals just right, a prism effect produces brightly colored sun dogs. I've seen lots of sun dogs over the years, but I've never noticed the ray that runs beyond the sun dog away from sun itself (to the right in the photo below). 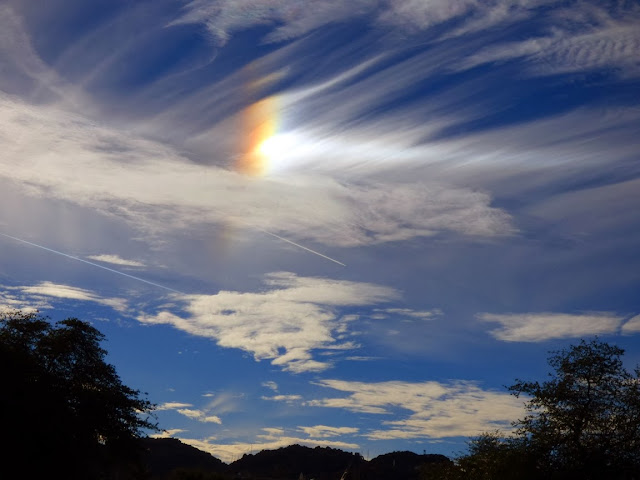 The sun was getting low in the west, so we headed back down the highway to the vast valley containing Phoenix and its many suburbs. The canyon nicely framed the setting sun. 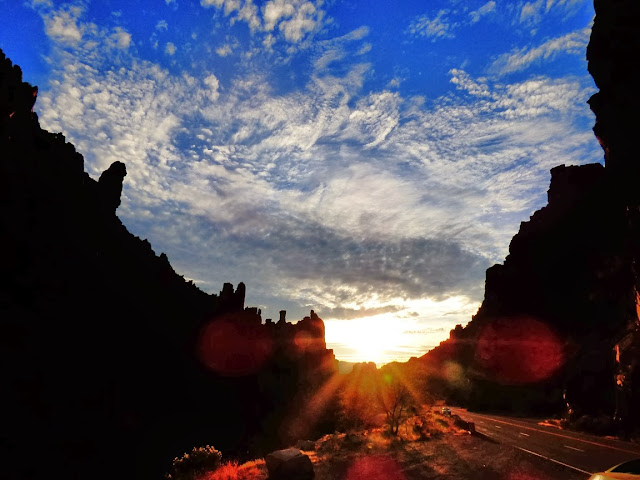 As we rolled down the slope towards Florence Junction, the haze in the valley gave the low hills in the distance a mystical appearance. 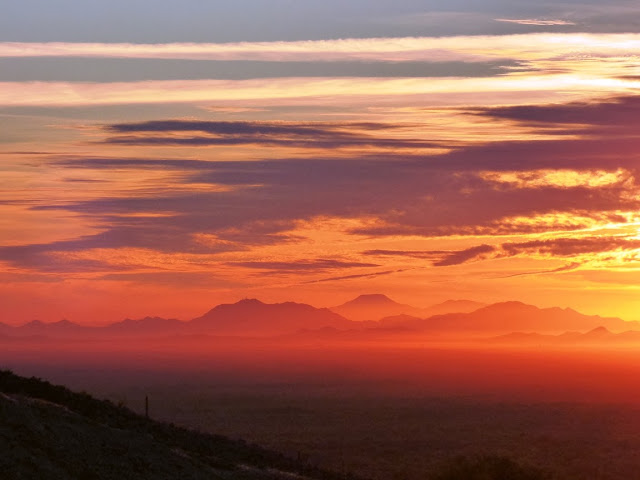 What a beautiful day it was. 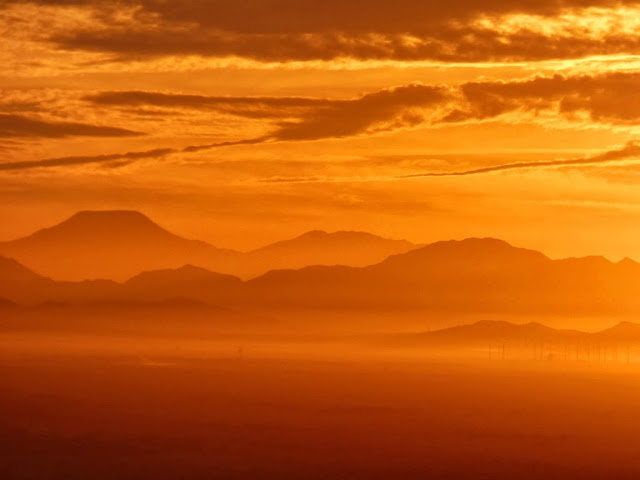