The Tormented Lost Souls in Hades? Or Maybe the Denizens of the Largest (?) Sea Cave in the World 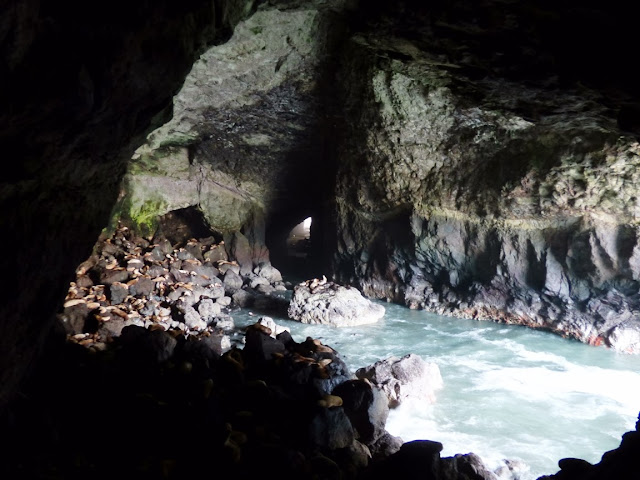 You've seen the bumper stickers, no matter where you've been in the country: Trees of Mystery, Wall Drug, South Dakota, and Mystery House of just about anywhere, and of course, Sea Lion Caves. I've never fallen for the allure of said bumper stickers, but Sea Lion Caves just happened to be 11 miles north of where I'm at this week, and there is definitely something geological about the place, so I gave in and checked it out yesterday.

The draw of the place is of course the fact that a great many Stellar's Sea Lions congregate inside the vast opening which is said to be the largest sea cave in the world. I pulled up and looked around. Big signs? Check. Gift Shop? Check. High ticket cost? Check. Yup, all the attributes of these kinds of attractions. 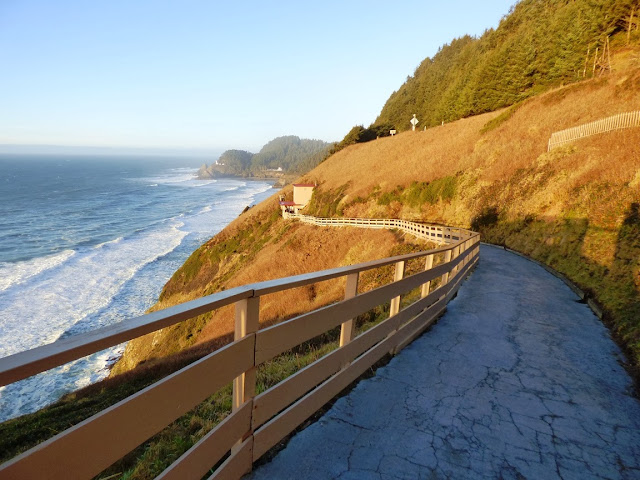 Still, the setting was beautiful. The site is on a high sea cliff on Oregon's Highway 101 eleven miles north of Florence, and just a mile or two from Heceta Head Light House and Devils Elbow State Park, two places I can highly recommend (they are part of a single park now).

From the gift shop, you walk down some steps and head down a paved path to the 200 foot elevator that drops you into the viewing area within the sea cave. There is no view or sense of what lies below, given the steepness of the cliffs. 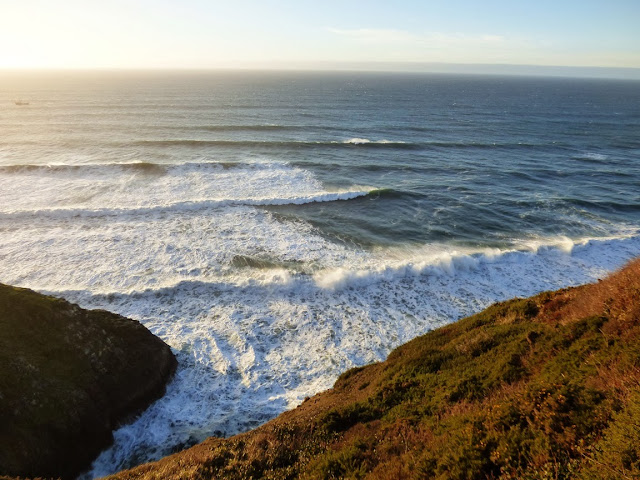 I looked to see if anyone has photographed the sea caves from the outside, and couldn't find any, so I went to GoogleEarth for help. Here is what you can see from there...the cave has three openings and extends for 1315 feet, making it the third longest sea cave in the world. They also have a claim about being the largest sea cave in the world by volume, though others make claims as well: check this link out, for instance. I can't really judge one way or the other, but noticed that the Riko-Riko cave included a submerged portion of the cave in its measurement. 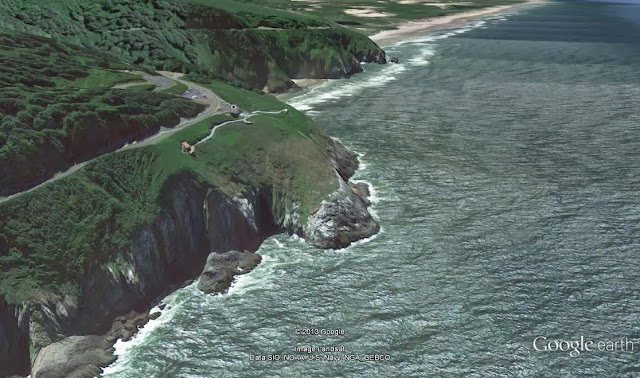 In any case, the cave at Sea Lion Caves is impressive. The ceiling of the cave is 125 feet up. The little tan-colored dots on the rocks in the first picture are full grown sea lions. I don't have any idea how they climb up onto those rocks. 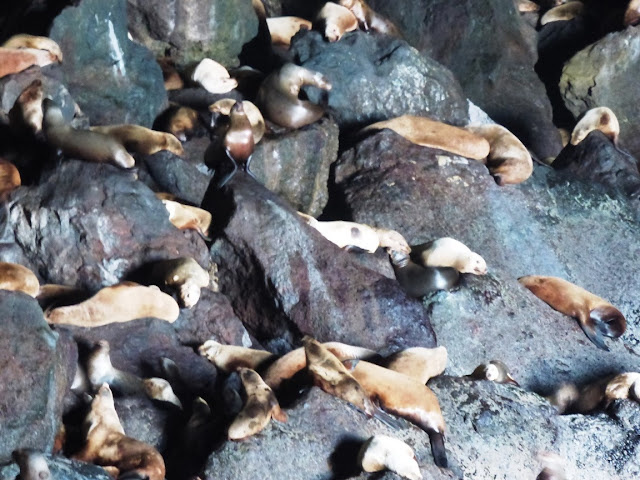 The noise is other-worldly, and if I were hearing it without the context, I would swear it was the tortured lost souls in Hades crying out for mercy. The vast opening echoes and amplifies the noise of around 200 sea lions.


So, is it worth it? That's a tricky question to answer. The cavern is huge, and is fascinating from a geological perspective. The Stellar's Sea Lions are certainly a charismatic animal species, and it is no doubt a spectacle to see so many of them gathered into one place. But responsible stewardship of the species makes it absolutely important to not bother or interfere with the animals, and that means that there is no exploration of the caves. One gets only the one view from the platform. There are some interesting exhibits to spice up the experience, including a fossilized skeleton of one of the sea lions that is at least hundreds of years old, and a full skeleton of another. There is a stairway that climbs to the third and higher entrance to the cave that provides a fine view north towards Heceta Head Lighthouse. 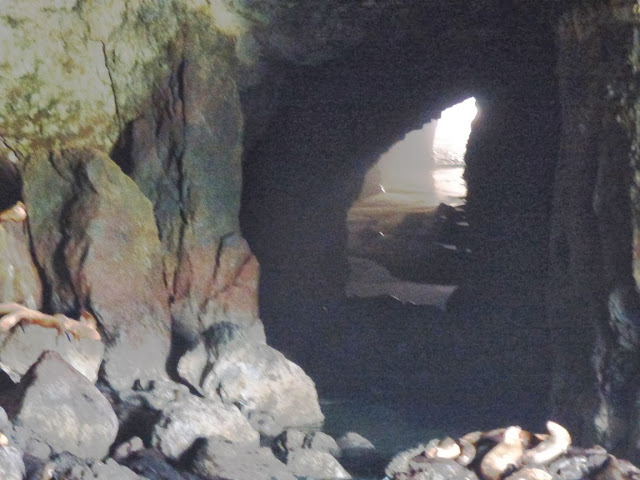 It's a capitalistic enterprise, so they presumably charge what the market would bear ($14 for adults and less for kids), and if I had a large family I would balk at the price. Still, I would say that it was worth the price to see such a huge cave, despite the limitations. It's the kind of place that I appreciate and am impressed by, but I pretty much need to see it only once. 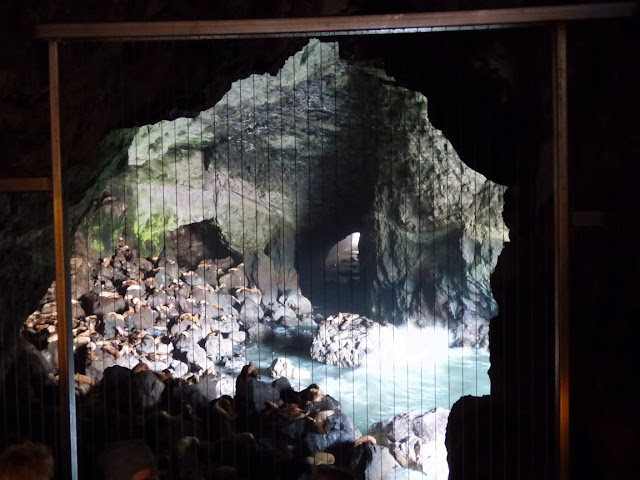 So, don't be afraid to check it out if you are in the area. If you want to see the sea lions, but don't have the monetary resources to pay the admission fee, stop in the pullout just north of the parking lot and look to the base of the cliff. I've seen a big crew of sea lions down there on every occasion I've been by (below). 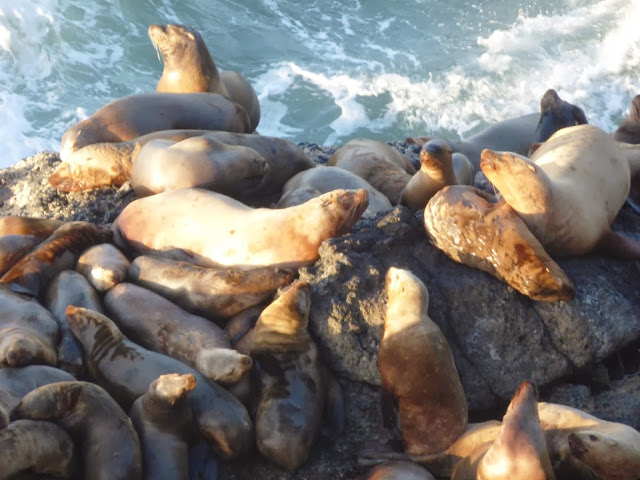 Here was my take on it 5 years ago, at this same time of year. I have the same conflict of price versus value, but it is definitely worth visiting once. http://outsidetheinterzone.blogspot.com/2008/12/sea-lion-caves.html

Yup, once was enough. And I didn't even get to see sea lions.