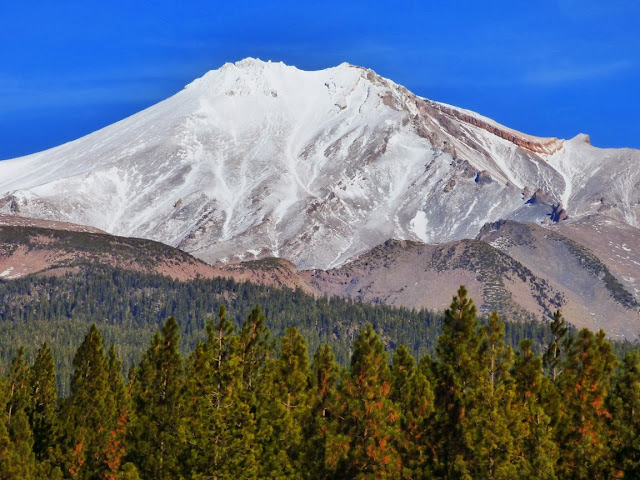 Here are a couple of scenes from our road trip this Christmas. Does the tagline seem a bit incendiary? It should be. Sure, there are three pictures of active volcanoes, but that isn't what makes them scary. We are looking at Mt. Shasta, the 14,000 foot high volcano that looms over northern California (above), and Shastina, the parasitic cone on Shasta's flank (below). What's terrifying? It's late December, and there is only a light dusting of snow. This mountain should be coated in snow from the high peaks to the low flanks. The road I was on should have been closed by snow drifts. 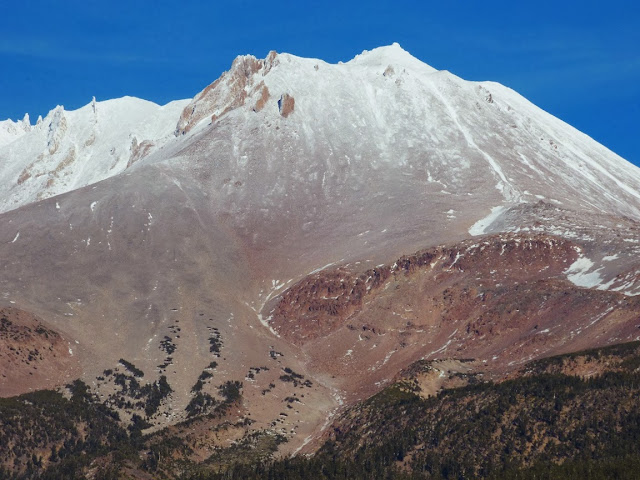 California is in the midst of a three year drought that shows no signs of abating. By some accounts, the last twelve months have been the driest in the state's history since at least 1895. They are having to fight fires in December in places like Big Sur, a region that should get feet of rain each year. Two years ago, I was able to drive over Tioga Pass, 9,950 feet high, after New Year's Day.
A worrisome pattern is developing. Three bad years in a row, and in the desert southwest, thirteen years of drought. Some climate scientists are suggesting that we may have to adapt to a megadrought, an event that has happened here twice in the last thousand years. These droughts lasted decades, and caused huge changes in places like Mono Lake and Lake Tahoe. Entire rivers dried up. I hope that won't be the case, but are we prepared in any way to deal with it if that is the case?

I hope it isn't what's going on. I hope that a whopper of a storm will move in, and that we will get a breather from the dry conditions. But we need to be ready if it doesn't. Some hard choices may have to be made.
Posted by Garry Hayes at 8:07 AM

Did the megs-droughts correspond to increased volcanic eruption volumes in the regions?

Great post, Garry; thanks for sharing! As to the question by WMB, NO, rainfall totals and snow accumulation on volcanic peaks has ZERO effect on what is going on many miles below in the magma chamber and in the conduit below it that feeds into it from the mantle.

Seems no one is talking/thinking much about adaptation.

Technology is our god we worship, serve, and look to for deliverance from our troubles and thus we continue on until there is a crisis and then look for a clever techno-fix solution to save us... problem is that the history of human civilizations is fraught with examples of highly adapted cultures who couldn't adapt adequately to sudden changes in their environment, usually prolonged droughts.

California's current dry spell truly is extreme, and right now there's no relief in sight. 2013 will definitely be the driest calendar year on record in California, and the 2013-2014 water year has had the second driest start in history (soon-to-be-driest, given forecast dry weather for the next 1-2 weeks). There's an extensive discussion of the extraordinary meteorological pattern driving this dry spell on the California Weather Blog at http://weatherwest.com

Thanks for the California Weather Blog link. I shall check it out. Feel free to join California Disasters on Yahoo Groups, Facebook, Linkedin, Reddit, and Twitter. Also, my Eclectic Arcania blog often covers weather and disaster stuffs.

Anonymous-Draughts have no correlation with eruptive volumes. Magma intercepting a water reservoir can lead to incredibly explosive eruptions due to a large volumetric increase when liquid water is converted to vapor when heated, but the processes that control the volumes erupted are far to deep to communicate with surface water.