Yosemite Reflections and the Answer to the Wee Mystery 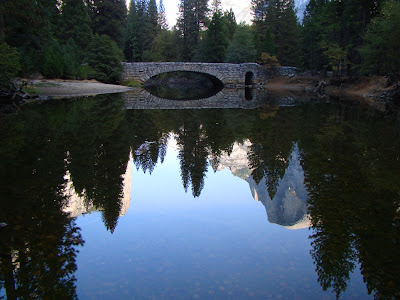 Most everyone who tried figured out the trick in yesterday's little mystery. Half Dome in Yosemite was indeed reversed, and it was reversed because we were looking at a water reflection of the iconic rock that looms over Yosemite Valley. One of the reasons I love the fall season in the valley is that the rivers are at their lowest ebb, providing a unique mirrored perspective of the high cliffs. The first and second pictures today are yesterday's mystery pics in their correct orientation. 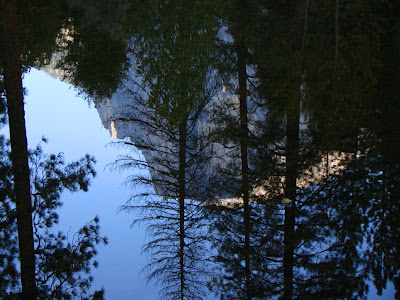 As I noted in yesterday's post, I was walking from Yosemite Lodge to Happy Isles, and as much as I could I followed the banks of the Merced River. There was no wind, and long stretches of the river were motionless pools. I've been to Yosemite around 70-75 times in the last 20 years, but these scenes were new to me. 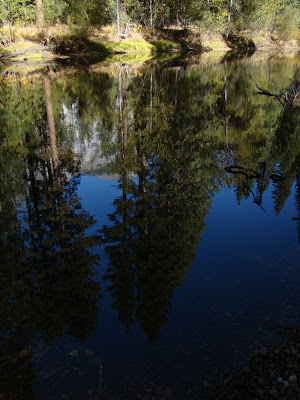 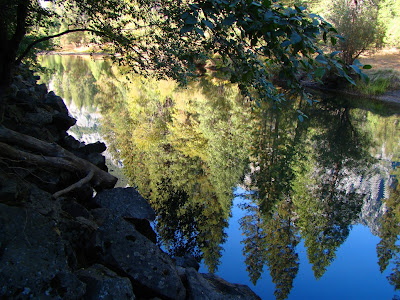 As mentioned yesterday, the riverbank environment has been severely impacted by the visits of 4 million people per year. Vegetation has been trampled, leading to sedimentation of the river where soil is not held by the roots of trees and shrubs. 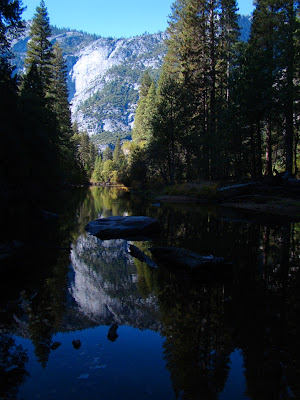 Only two fish species are native to Yosemite Valley, the rainbow trout and the Sacramento sucker. Other species were introduced in the 1870s, and trout were stocked through the 1970s. The fish that remain today are 'feral' populations. The non-native fish have had a profound and negative effect on the other creatures in the riparian ecosystem, especially the amphibians. The endangered Sierra Nevada Yellow-legged Frog is an important example. It has been extirpated in almost every lake and stream where fish have been introduced. 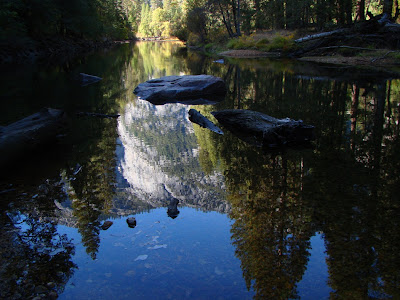 I walked past a very quiet tent camp in Curry Village. This was the most deserted part of my walk, but during the summer, it is a hotbed of tourist activity. I just love this time of year! 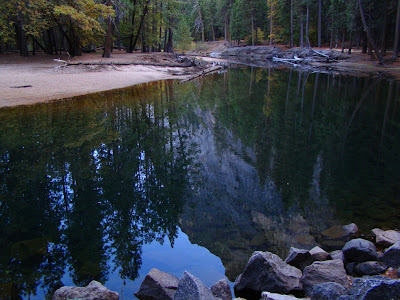 I've never really seen Stoneman Bridge before. We always drive or walk over it all the time, but on this day I wandered up to it from downstream to get a different view. Half Dome and Washington Column were reflected in the water. I couldn't help but notice that photographers had piled rocks in the riverbed to form a bridge to the best vantage point. 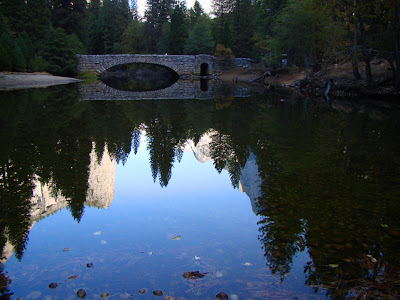 In the picture below, North Dome is reflected in the water... 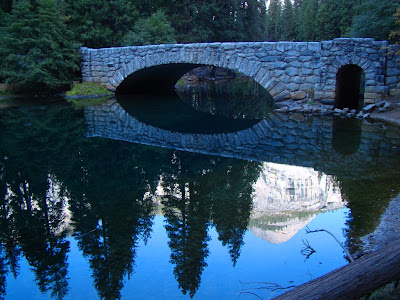 The water in the river was transparent and totally still. At this point, I had to leave the river. It makes a long meander to the north and I was running out of time. I needed to talk to my students about the huge Happy Isles Rock Fall that took place in 1996, damaging the Nature Center, and killing one person. We would also be talking about the catastrophic flooding in 1997. Those violent natural disasters seemed distant and improbable in the peaceful setting along the river on this fall day. 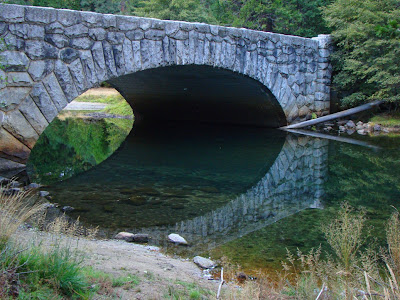 I've enjoyed photographing birds over the years. The water ouzel has proved to be one of my most elusive quarries over the years. I've seen them, but they never seem to stop moving. I saw one this time and I snapped a dozen pictures, but I remain mostly defeated in my efforts towards a sharp picture. This was the best one.... 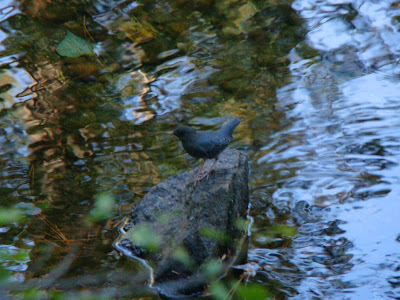 Better luck next time! And I hope it is soon...
Posted by Garry Hayes at 9:54 PM

Great photos as always, Mr. Hayes! I can't wait to get back to Yosemite to work for the winter!