Ghosts of the Gold Miners - The Kennedy Mine

As a geologist, I understand the attraction that historians have for history. Geologists are historians in their own way, although our "history" covers, oh, just a few billion years more than that of students of human history. On the other hand there is a certain distance between ourselves and our subjects. I can't exactly feel an emotional kinship with a trilobite or tyrannosaur, but I can look at pictures like these, and see something in the eyes and lives of the people who stood together in 1914 in front of the Kennedy Gold Mine in Jackson, California. The picture hangs in the museum at the mine. If this had been a picture of a Pennsylvania shipyard at almost the same time, one of the young men could have been my grandfather. 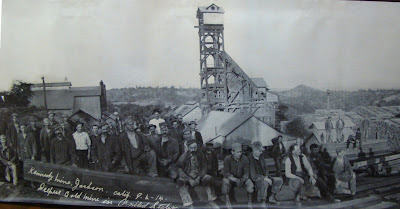 These were the miners, millers, muckers, and mechanics who ran the gold mining operation. Even though it ceased operations in 1942, much of the mining complex still remains, and is open for tours. We were there for our field trip to the Mother Lode last weekend. 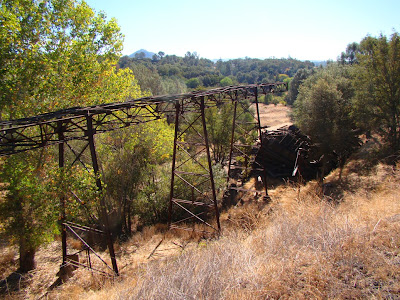 Looking at pictures like this, and looking at the artifacts from that time, one quickly realizes that there was nothing romantic about being a gold miner. If such "romantic" lives ever existed, it was during the first heady years of the Gold Rush in 1848, but it didn't last long, and few people actually became rich. Most of the miners were the farm laborers of their day. Pay was low, and conditions were appalling. A diagram at the museum shows that with the exception of the Depression years, the miner's pay was much lower than other related positions in the workforce. 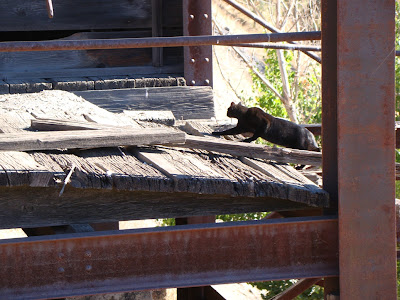 Imagine working in a place where the management required that all workers had to change their clothes and shower in front of observers, to make sure they weren't trying to walk out with gold samples. Safety regulations didn't exist. There were no hard hats. Mining accidents were a fact of life; exhibits at the mine note that accidents took 36 lives between 1887 and 1942. In 1922, one horrible tragedy (an underground fire) took 47 lives in the adjacent Argonaut Mine. Statistics don't record how many miners led shortened lives from breathing the quartz dust ("miner's phthisis", or silicosis). 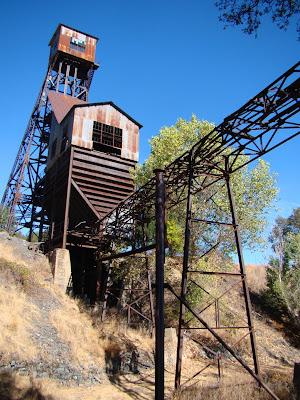 The miners and muckers worked in the dark, with a single candle for illumination in the early years (carbide lamps came later). The work was backbreaking. Early on, holes for explosives were drilled with hand tools. Steam operated drills came along later, but they produced far more dangerous silica dust. 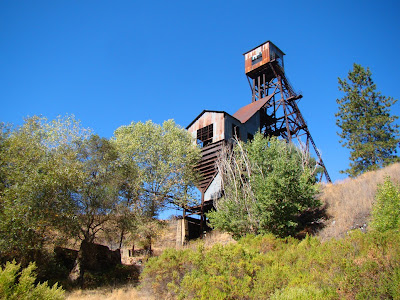 Still, the mine was an impressive operation. From 1860 to 1942, the mine produced around 1.4 million ounces of gold. The underground workings exceeded 130 miles in length, and reached a depth of 5,912 feet, the deepest mine of its day. The site had a 100-stamp mill for crushing the gold-bearing rock (about 1/4 ounce per ton) that ran 24 hours a day. The noise had to be deafening. 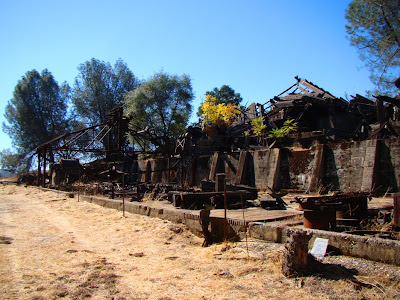 The present day metal headframe is 125 feet high. The earlier wood headframe (visible in the historical photo above) burned in 1928. The fire actually burned all of the above-ground buildings except for the stampmill and the mine/milling office (below). 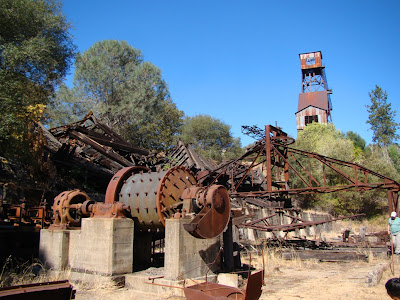 The most jarring building on the property is the mine office. It looks totally out of place given the harsh industrial nature of the other surviving buildings at the mine. Despite the Victorian appearance, there was a foundry on the left side of the building where the gold ingots were forged. The mine offices and walk-in safe were on the right bottom floor. Offices took up the second floor, and the top floor included accommodations for investors and VIP visitors. 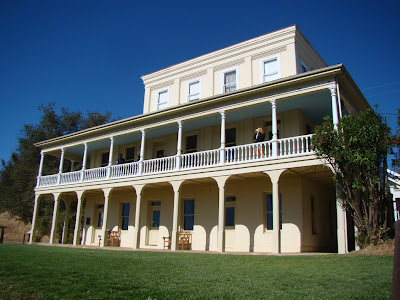 The mine produced a lot of gold and yet it also produced mountains of toxic waste (they were polluting the town water supply and were eventually forced to put the acid-rich tailings in another valley entirely, using a unique set of waterwheels). It was a critical part of the town's economy, and yet broke lives. It is an interesting conflict of priorities. The last owner of the mine site desired that mine be preserved, and yet she also hoped that the property could preserve the natural environment as well (there are far more trees on the mine property today. The Kennedy Mine Foundation attempts to fill that role, and they have done a good job at presenting the story and the history of the operation.
Posted by Garry Hayes at 4:20 PM

I just stumbled on this blog. INCREDIBLE! Thank you so much. Great & Fascinating place.